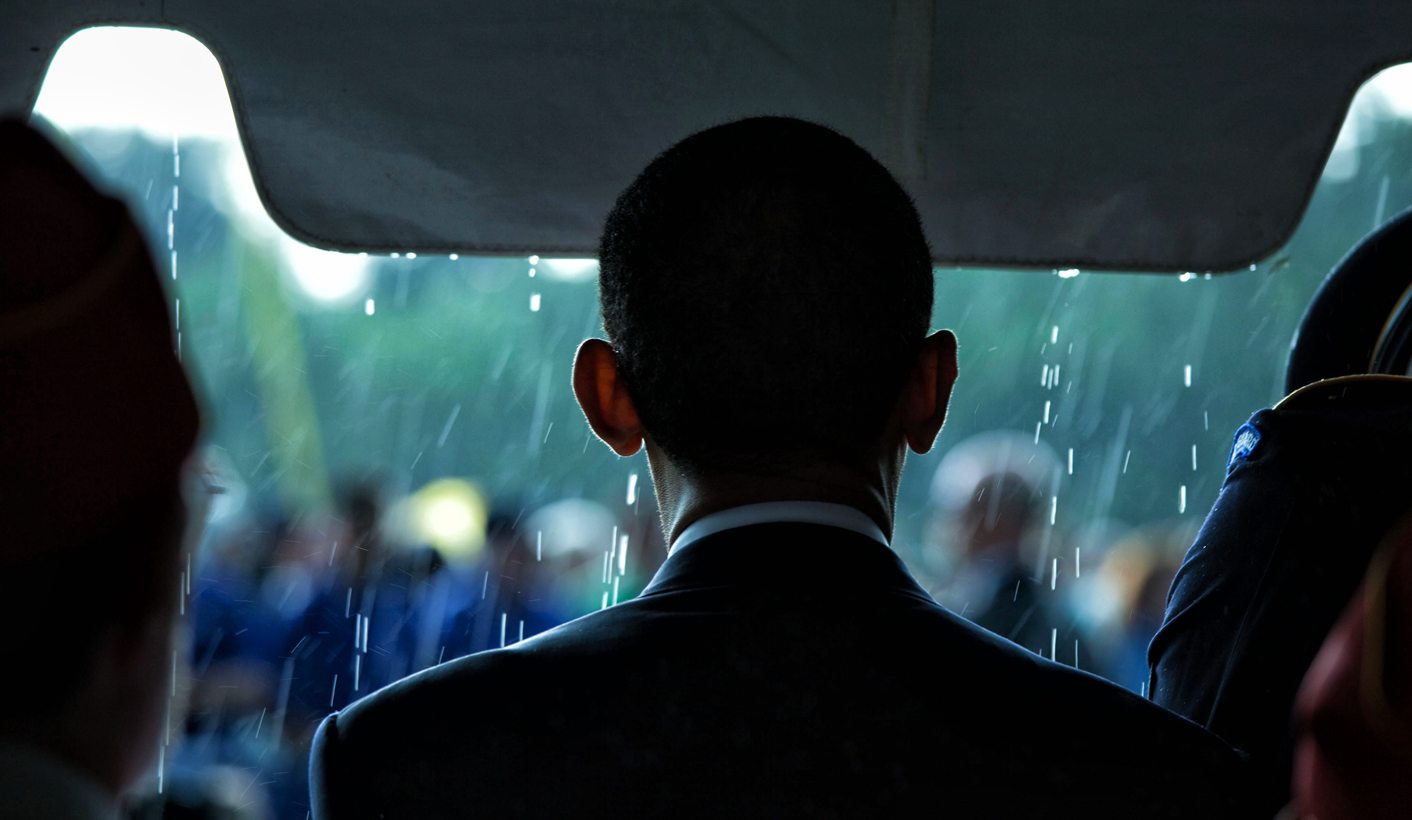 The handover of power in the United States is not just a change of guard for that country but a defining moment for the 7.4-billion people who inhabit this planet. Whether through his agenda and policies (presuming something vaguely coherent emerges) on climate change, global security, immigration, human rights or the economy, President Donald Trump will impact the future of the world and how we live in it. It is not unreasonable to feel afraid about the new world order. Today, however, it is appropriate to feel nostalgic – about the end of the era of hope and the guy who made it okay to be human. By RANJENI MUNUSAMY.

As thousands of people were making their way to Mangaung in the Free State in December 2012 for the ANC’s 53rd national conference, horror was unfolding in Newtown, Connecticut. An unhinged man shot dead 20 children, between the ages of six and seven, and six staff members at the Sandy Hook Elementary School. A few hours later, President Barack Obama addressed his nation on the tragedy.

“We’ve endured too many of these tragedies in the past few years. And each time I learn the news I react not as a president, but as anybody else would – as a parent. And that was especially true today. I know there’s not a parent in America who doesn’t feel the same overwhelming grief that I do.”

And there, in the briefing room of the White House, the President of the United States wept – for the young children who lost their lives, for the shattered families, for a broken nation where some believe the right to bear arms takes precedence over young children’s right to safety in their schools.

The most powerful man on the planet wept publicly that day because his pain over this tragedy was so immense. Across the world, people felt the agony of the victims and the sorrow of a nation.

In Mangaung, South Africa, the ANC was preparing for the opening day of its national conference. The leadership of the ANC thus missed rolling coverage of the tragic scenes at Sandy Hook and the raw emotion and empathy of a president.

It was a pity they missed it as just four months earlier, 34 mineworkers at the Lonmin Platinum Mine in Marikana were shot dead by the police. It was, and remains, the worst moment in democratic South Africa when the collusion between political and business interests led to a loss of some people’s sense of humanity. The response of the ANC was anything but empathy for the victims and survivors. Nobody in the leadership cried for them or for our broken country.

Justice for the people of Marikana remains non-existent.

Leadership in the world today is complex. Vision, political savvy and experience count little as unorthodox personalities with non-traditional politics rise to the top. As some nations become more insulated, they look for leaders who embrace self-interest and eschew the idea of open societies. The rise of populism and white nationalism has led to a shake-up of the world order, with the election of Donald Trump as the 45th president of the United States as their crowning moment.

The change of guard in America is therefore not just a swing of the political pendulum. It is an overturning of the establishment and a change of values.

As a businessman and entertainment personality, Trump’s values were a moving target. On the campaign trail, they shifted according to the demands of his rebellious constituency. While Hillary Clinton’s loss to Trump stunned the world, the tell-tale signs of the anti-establishment rebellion were there, festering during the course of the Obama presidency.

The growth of right-wing nationalism, racism, xenophobia, homophobia, Islamaphobia, anti-Semitism and anti-feminism collided into the hate-fuelled assemblage that comprised Trump’s support base. Now they thrive in an era of post-truth and fake news. They despise the media because they despise their own reflection in the mirror journalists hold up.

Obama was the antithesis of what they believed was the “real America”. He was the epitome of “The Other”. He was just too unlikely a president of the United States of America.

The son of a Kenyan, a Muslim man, raised by white grandparents, should have been confined to the “inner cities”, Trump’s default term when speaking about or to black people.

Trump struck gold when he sparked the “birther movement”, a ludicrous conspiracy theory that inflamed the prejudice of his followers. His “great wall” to keep people out of America is to be a monument of his presidency.

Obama did not pay enough heed to the rise of hate in his country, even against him, his skin colour and his values. He relied too much on the inherent goodness that should exist in every person. His humanity was his greatest strength and greatest downfall.

It was what propelled his administration’s hard fight on universal healthcare in the form of the Affordable Care Act. Obama believed people’s humanity would triumph in the fight for stricter gun control measures, marriage equality and on the fraught issue of immigration. While some of these battles were won legally, on the ground it was brewing more hate and rebellion.

Obama’s legacy is that of incredible accomplishments and dreadful failures. The killing of Osama bin Laden, the Paris Climate Agreement, the Iran nuclear deal, reopening of diplomatic and economic ties with Cuba, granting over 16-million people health insurance through Obamacare, and the cutting of the unemployment rate in half, are what his administration wants to be defined by. His detractors will judge his term by the rise of the Islamic State, the US’s disastrous intervention in Libya, drone strikes on civilians, the dithering on Syria, the tumult over immigration and heightened racial tensions in America.

But many people will also remember Obama for his genial disposition, his quirks and how he related to them. He was an everyman who worked his way to become the world’s most powerful leader. He kept his sense of humour and his feet on the ground. His charisma made him endearing. His speeches are for the ages.

Now America and all its economic and military might, as well as its nuclear capacity, is in the hands of a freewheeling, uncouth, childish, deceitful, wealth-driven performance artist. As his campaign, the transition period and his cabinet picks have shown, Trump is making things up as he goes along. There is no proper agenda and definitely no coherence of thought – evident in his Twitter feed and his shambolic media briefing last week. From the moment he raises his right hand to take the oath, the world will become a wholly uncertain place where the follies of a neurotic, naked emperor can redefine history.

The Barack Obama story should have a happy ending, irrespective of the havoc Trumpdom will wreak to undo his legacy. He was the guy who defied the odds to become the 44th president of the United States. He beat those odds because he refused to be defined by how other people saw him but rather by how he saw himself, and by his own humanness.

Even in his last days in the White House, Obama admitted to his own fallibility, but still and always reminding the world what carried him through to the end: Hope.

It was the enduring message in his farewell address in Chicago this week.

“Whether you are young or whether you’re young at heart, I do have one final ask of you as your president – the same thing I asked when you took a chance on me eight years ago. I’m asking you to believe. Not in my ability to bring about change – but in yours.”

Obama and his family epitomised human decency and grace in the way they conducted themselves in their time in the White House. They showed the world that politics need not be vulgar and self-serving but rather about public service. And whether it is little children killed at their school by a deranged person or people slaughtered in their Charleston church by a racist, Barack Obama reached out and embraced his people.

For a little while, Barack Obama was what the world needed. DM