African troops move into Gambia as new president sworn in 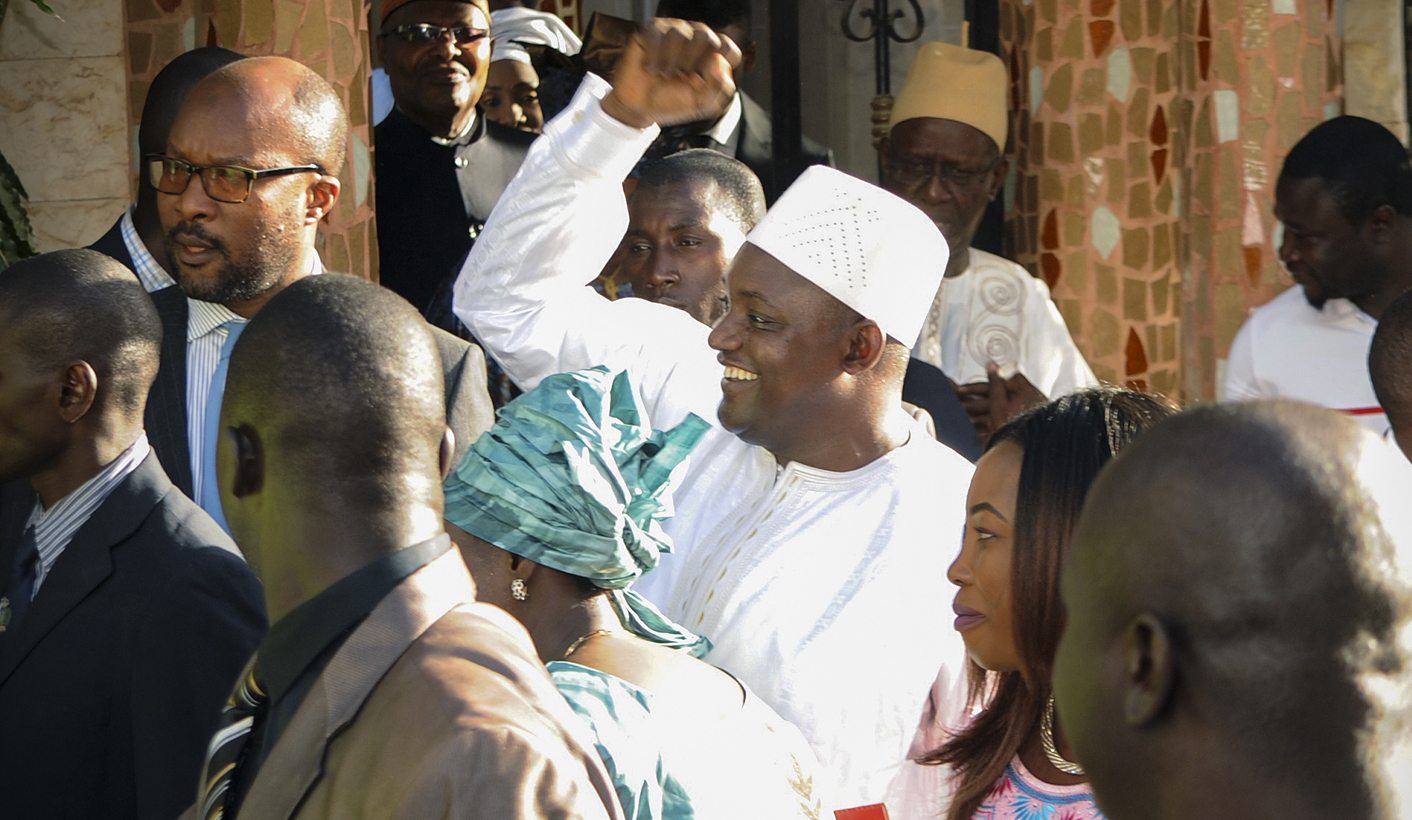 West African troops entered The Gambia on Thursday to bolster its new President Adama Barrow, as Gambians erupted in celebration at his inauguration to succeed longtime leader Yahya Jammeh, who has refused to quit. By Malick Ba in Dakar with Jennifer O'Mahony and Emil Touray in Banjul, for AFP.

Senegalese forces and those of four other nations crossed into the tiny tourist-friendly country, whose army chief joined ordinary citizens celebrating in the streets seven weeks after contested polls.

Barrow was sworn in at The Gambia’s embassy in Dakar in neighbouring Senegal after Jammeh has refused to step down despite international pressure following his December election loss.

Dressed all in white, 51-year-old Barrow waved to a crowd of thousands of jubilant Gambians at an inauguration ending Jammeh’s 22-year rule.

“This is a victory of the Gambian nation. Our flag will now fly high among those of the most democratic nations of the world,” he said, demanding loyalty from his armed forces.

Shortly after the ceremony, the UN Security Council unanimously backed efforts by the regional bloc ECOWAS to force Jammeh to hand over power, (without formally authorising military action).

As Barrow was sworn in, celebrations erupted in the Gambian capital Banjul, where tensions have run high over the crisis, especially since a declaration of emergency by Jammeh on Tuesday.

Among the revellers was Gambian army chief Ousman Badjie, who had said Wednesday he would not order his men to fight the African troops then poised to intervene.

“Freedom has come at last. Tyranny is buried and democracy restored,” said Barrow supporter Lamin Sanyang, who had joined the crowds.

Further dispelling fears of a fight-back by factions loyal to Jammeh, a minimal troop presence was visible near Banjul and soldiers did not stop the jubilant scenes.

But on the ground armed forces including “all means, land air and sea” forces crossed into The Gambia, a Senegalese army officer told AFP, adding that Nigeria, Ghana, Togo and Mali were also involved.

A Senegalese army spokesman confirmed his country’s troops had crossed the border, after Nigerian jets earlier overflew The Gambia to help force out Jammeh, whose mandate expired at midnight Wednesday.

Barrow, an opposition coalition candidate, defeated Jammeh, who had ruled the former British colony since seizing power in a 1994 coup, in a surprise election win on December 1.

He initially conceded victory but in a U-turn then refused to step down.

On Thursday night, calls of congratulations flooded in for the new president, including from the UN Secretary-General and Britain.

Barrow, a real-estate agent turned politician, had flown into Senegal on January 15 to seek shelter after weeks of rising tension over Jammeh’s stance.

Jammeh had attempted to block Barrow’s inauguration with a court ruling and this week declared a state of emergency.

Jammeh’s former lawyer Edward Gomez, who was arguing cases on the president’s behalf as late as Monday, pleaded with him to step down Thursday after himself fleeing to Senegal.

“My humble prayer to President Jammeh is to concede to defeat,” he told Senegal’s 2S channel. “Please, let peace continue to reign in The Gambia.”

It was not clear whether the Mauritanian leader had secured a deal or made an asylum offer to Jammeh.

The last-minute intervention came after several unsuccessful attempts at diplomacy by the 15-nation Economic Community Of West African States  (ECOWAS).

Mauritania is not part of ECOWAS and diplomats have previously reached out to the conservative desert nation in hopes of brokering a deal with Jammeh.

Arriving back from The Gambia at Manchester airport in England, several passengers could be seen comforting a Gambian national and UK resident who had tried unsuccessfully to get his family out.

Ebrima Jajne described the situation as “really scary for everybody… because this president (Jammeh) doesn’t want to step down and people are fleeing.” DM

Photo: President-elect of Gambia Adama Barrow (C) waves to supporters after he was sworn in as president at the Gambia embassy in Dakar, Senegal, 19 January 2017. West African military forces are moving in to enforce the transfer of power removing President Yahya Jammeh following his refusal to accept election results and hand over power to President-elect Adama Barrow. EPA/STR