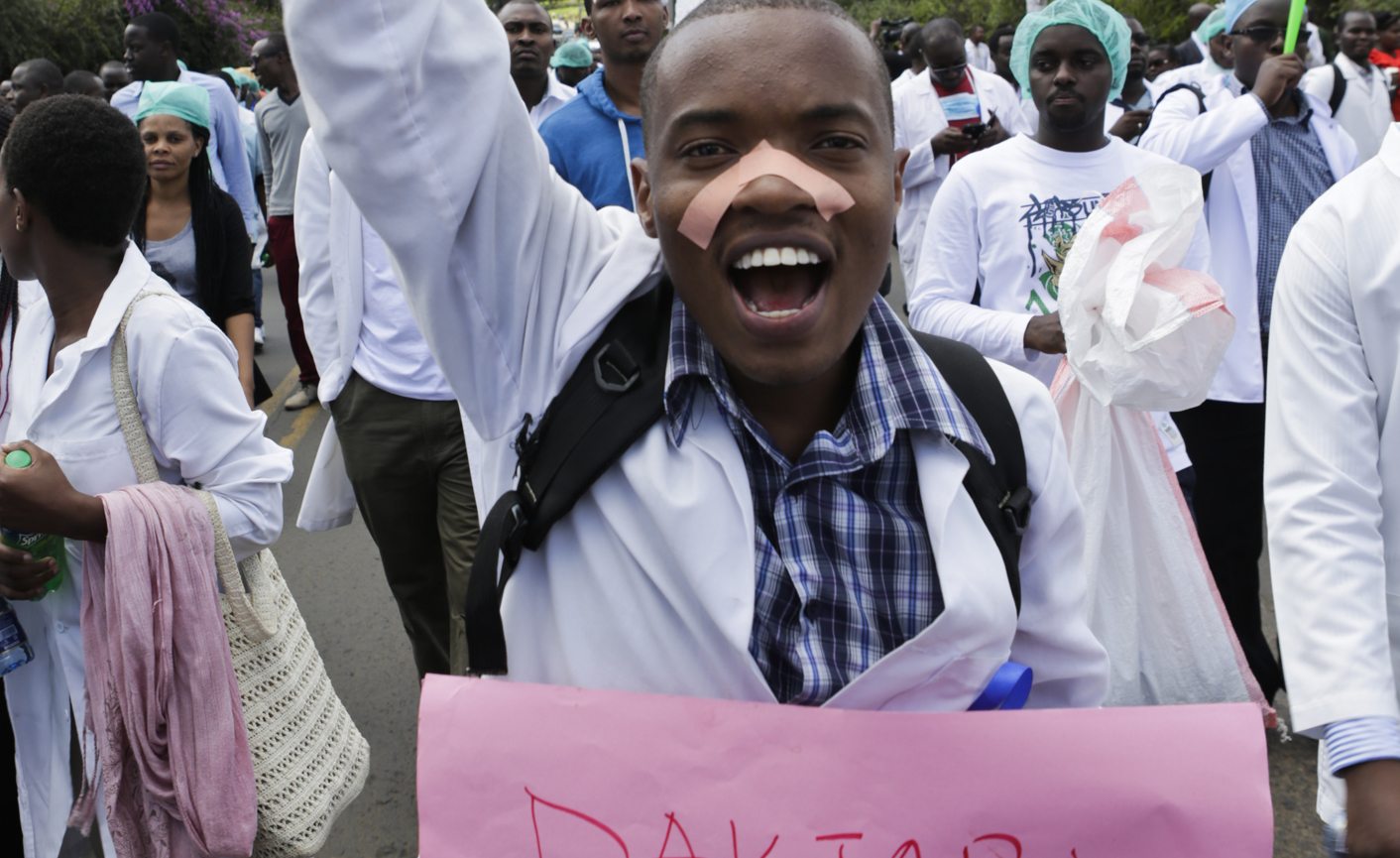 A nationwide strike by public sector doctors and nurses in Kenya has shut down most public health facilities, and left many patients with no recourse to medical attention. By NJERI KIMANI.

“You stink like sewage,” said labour court judge Helen Wasilwa as she handed down a one-month suspended sentence last week to leaders of the Kenya Medical Practitioners and Dentists Union (KMPDU). The judge’s harsh words echo the sentiments of many Kenyans 45 days into a nationwide strike of public sector doctors and nurses that has crippled the public health sector.

Activities at all government hospitals, dispensaries, health clinics and voluntary testing and counselling facilities have come to a standstill. At most medical facilities, patients who do arrive seeking treatment are greeted with empty wards and locked examinations rooms.

Patients referred to government hospitals are forced to seek alternatives at private hospitals nearby, and many can’t afford to pay the high price of private medicine.

Abdi Omar, 53, who has diabetes, was forced to buy insulin from private pharmacies at a much higher cost. “It is unfortunate that a drug I normally get for 300 Kenyan Shillings (R39) is now double priced at the pharmacies around,” he said.

It’s not that the medical professionals on strike don’t have a point. They are arguing for the full implementation of a Collective Bargaining Agreement that was agreed with President Uhuru Kenyatta in 2013, just a few months after he assumed office.

The main issue is pay, which has failed to increase as agreed.

“It stipulated a 300% pay rise for our 5,000 members and was also meant to review their working condition and job structures. It also would look into the criteria for promotion and address the great understaffing we are experiencing in the country. However, the government has failed to listen to us and has only engaged us in lots of dialogue and diplomacy,” said Samuel Oroko, KMPDU secretary-general.

The agreement also said that doctors should only work 40 hours a week, or be paid overtime, and that the government would employ an additional 1,200 doctors every year to fix the understaffing endemic to Kenyan health facilities. Under the terms of the Collective Bargaining Agreement, doctors would also receive a house mortgage and car loan allowance.

KMPDU have already rejected an enhanced pay package from the government worth 4-billion Kenyan Shillings (R500-million), on the basis that it falls short of the deal agreed in the Collective Bargaining Agreement.

The government’s attempt to alleviate the strike by importing 2,500 doctors from India failed last week after the Indian government rejected the plan. Attempts to threaten doctors – one governor said he would fire all doctors who did not return immediately, while some counties have said they would withhold salaries from all strike participants – haven’t worked either.

The issue of the doctors’ strike has put the government under immense pressure, with critics lambasting both its failure to implement the Collective Bargaining Agreement and its inability to solve the crisis in a timely manner.

Mombasa Senator Hassan Omar, for example, accused both county and national government of taking too long to negotiate a solution. He said that the doctors’ demands were not farfetched, and should be met by the government. “The government is not doing enough negotiation around the issues being tabled,” he said. He described the failure of President Kenyatta’s government to honour the Collective Bargaining Agreement as unfair, saying that it was a dishonest attempt to defraud doctors of what was legitimately negotiated.

President Kenyatta offers a different assessment. He says the government is negotiating in good faith, and that there is no reason why doctors should not return to work while these talks continue.

“For the last two weeks, the governors and the unions have been engaging. Why should we have lost over 14 close to 20 people already? Good faith requires that we do not put the lives of our fellow Kenyans at risk; let us not allow innocent Kenyans to suffer,” the president said. DM

Photo: A Kenyan healthworker shouts slogans holding a banner written ‘Daktari is wounded’ meaning ‘The Doctor is wounded’ during a protest in Nairobi, Kenya, 05 December 2016. Thousands of healthworkers took to the streets in efforts to push the government to implement a Collective Bargaining Agreement (CBA) they signed in June 2013 to improve pay and conditions of work. EPA/DANIEL IRUNGU