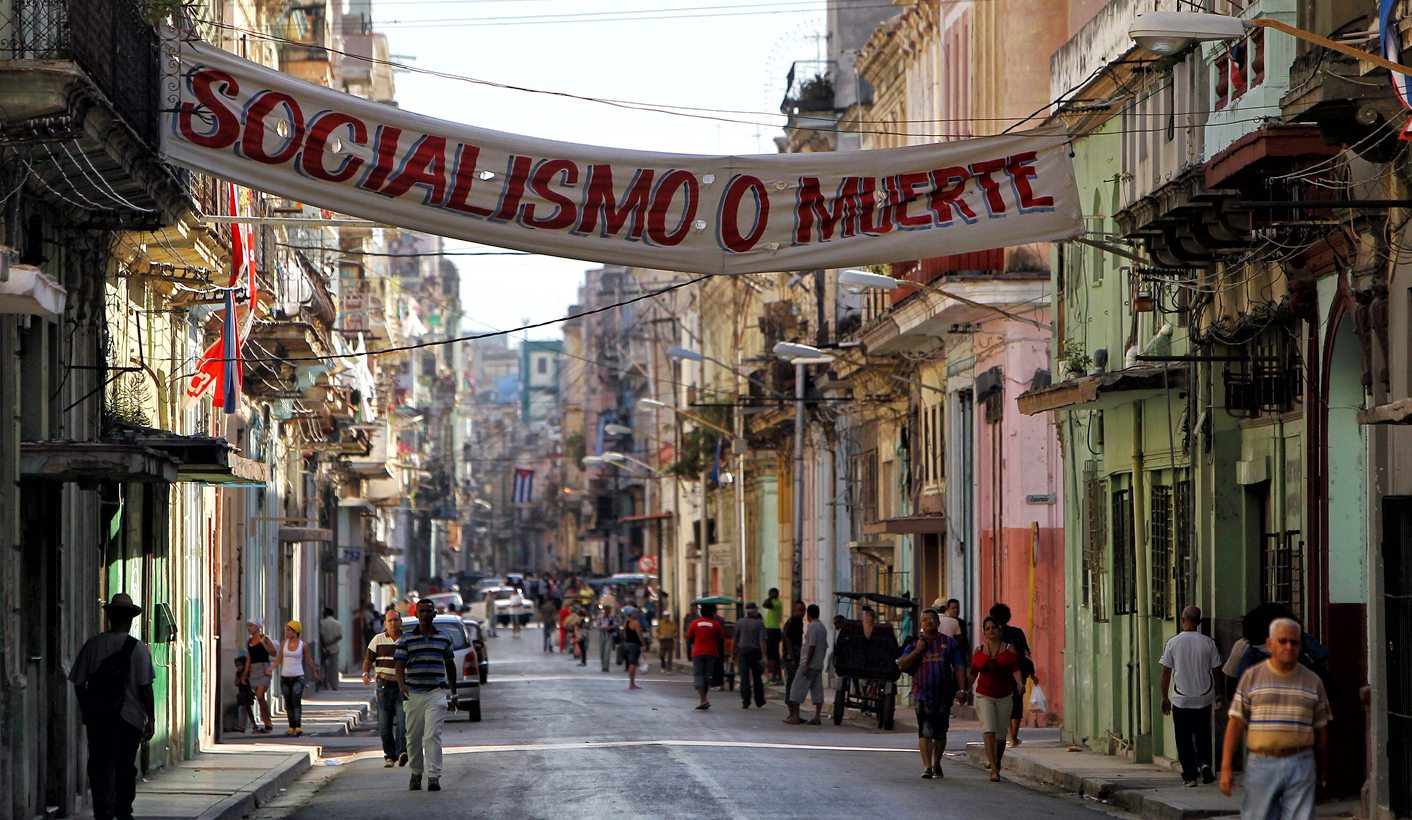 No one seems desperately poor in Cuba, at least not by developing-world standards. After South Africa, it is almost surreal to see no shanties. Crime is close to zero – doors are left open. Every Cuban gets a monthly food ration. And yet, there’s a dark, disturbing shadow. By GLEN RETIEF.

Cuban men have beards. At least they did in the Rocco De Wet, Grensvegter photo-comics I read as a boy. There, they also wore red berets, quoted Fidel, and struggled to outwit our 1980s, moustachioed Afrikaner.

In the Museum of the Revolution in Havana, however, the sepia-hued volunteer fighters celebrating Cuba’s victory over apartheid are mostly beardless. A young, multiracial crew wearing green camo fatigues, they hoist their rifles and grin, young and overjoyed, for the camera.

To call Cuba a study in nostalgia is in itself, of course, to repeat a rueful cliché. Yet the maudlin mood is all but irresistible; 1950s Fords and Buicks sputter along the Malecon, emitting diesel and petroleum fumes. Saints, cannons, and banyan trees grace Old Havana’s baroque patios.

The deeper wistfulness is, perhaps, political. So here I am, for example, one weekday night at the Casa de Las Americas, founded after the Revolution to be a cultural hub for Latin America and the home of what would become one of the region’s premier literary prizes.

Tonight’s free lecture is part of a vast web of programming offered by the government throughout the country: symphonies and art museums, poetry and dance classes. Danny Glover, the actor, and James Early, the folklorist, both African-American, are discussing race relations in the Americas.

The Cuban Revolution does come in for some pointed criticism. There are too many Afro-Cubans in jail, says Early – a point apparently acknowledged by Raul Castro – and too few of them in political leadership.

Despite more visible interracial friendship and partnership on the street than I have seen in either South Africa or the US, Glover tells a story of meeting a private Havana restaurateur who frankly stated he preferred not to hire black people.

This all strikes a chord. A rainbow audience cheers: young black women in colourful headclothes, with conch shell necklaces; the skinny, mustachioed, grandfatherly librarian who looks like José Saramago.

Overall, though, the evening seems imbued with the kind of progressive hope I haven’t experienced since my South African university years, in the early 1990s. “Cuba is ahead of almost every other country,” Early says, and this also gets applause – this crowd is proud of the revolution’s legacy.

“Power to the People,” say the highway billboards, throughout the city; “58 years of Health and Peace for All.”

And indeed, no one seems desperately poor, here, at least not by developing-world standards. After South Africa, it is almost surreal to see no shanties. Crime is close to zero – doors are left open. Every Cuban gets a monthly food ration.

Later in the week, when I endure a spell of dizziness while diving a coral reef, the Cuban medical system provides two hours of a kindly, chatty Afro-Cuban doctor and nurse scraping wax off my eardrums, all for the princely sum of R130.

Yet the contradictions persist. The nostalgia for, say, the South Africa that much of our Left imagined in 1994 – Chris Hani succeeding Madiba and implementing the socialism of the Freedom Charter – soon runs up against a dark, disturbing shadow.

Amnesty International judges Cuba a major human rights offender. Any would-be Malemas, Maimanes, or indeed Mandelas languish behind bars, victims of laws assigning jail for any speech that “shows contempt for” the Revolution. The only legal political party is the Communist one. Prisoners’ wives and mothers march in white on Revolutionary Square.

Cuban leaders justify the lack of democracy as a survival tactic in the face of aggressive global imperialism. Even granting this, does that mean that in the contemporary developing world, civil rights are incompatible with economic and social rights? If you want housing for all, must you then dispense with free speech, or hegemonic capitalism will defeat you?

Talking of economics: on our second day in Havana all the stores ran out of any bottled water other than the tiniest sizes. With tap water undrinkable, we resorted to drinking bottles of soda water in the heat.

Government restaurants present menus of a dozen or so pages, then announce: “We’re out of everything except shrimp and lobster.” A taxi driver explains, “I can’t fix the floor of my house, because on the rare occasions the government stores get tiles or cement, crooks buy it all up for resale.”

At a tourist coffee plantation in the green, bucolic little town of Viñales, a young guide mentions that though he studied to be one of the revolution’s schoolteachers, he doesn’t really like the classroom. Then he gives us a broad wink, a mannerism so commonly shared by Cuban men that is coming to strike me as archetypal to this country, a way of finessing its profound but compelling absurdities.

What the wink means, among other things, I eventually surmise, is that our guide would rather earn R450 an afternoon in tourist tips than R450 a month for teaching children how to read.

So, then: how much longer can the market bear a 99% literacy rate? For how many more years can Cubans live 15 years longer than South Africans, when the doctor who takes the divers’ blood pressure makes a tenth the tips of the instructor?

US President-elect Donald Trump has threatened to extract deeper concessions from the Cuban government, or else shut the door on the recent détente.

Yet Trump gets this, like so many things, precisely back to front. The antidote for authoritarian revolutionary idealism surely isn’t less capitalism.

Watch the Revolution’s clinics empty, its schools and universities shutter their windows. Watch ordinary Cubans pursue the same things as the rest of us: cars, smartphones, videogames. And why not?

On the coffee farm our former socialist schoolteacher picks up his silver coin. He smiles and waves, a generous waiter, glad to let us top up our piña colada with Guayabita rum. My husband and I leave with mixed feelings, happy for him but sad for the students who will no longer learn from him, pleased for his expanded economic freedom but melancholy about the apparent fragility of his nation’s accomplishments. The two of us complicit, as travellers so often are, in the destruction of the thing we came to feast our eyes on while it lasted. DM

Photo: A banner reads ‘Socialism or death’ at a street downtown Havana, Cuba on December 31, 2012. Hundreds of banners have been placed at Havana streets celebrating new year’s eve and the 54th anniversary of the Cuban Revolution that took place on January 1, 1959. EPA/Alejandro Ernesto