Fake it till you make it: What is SA doing about its fake news problem? 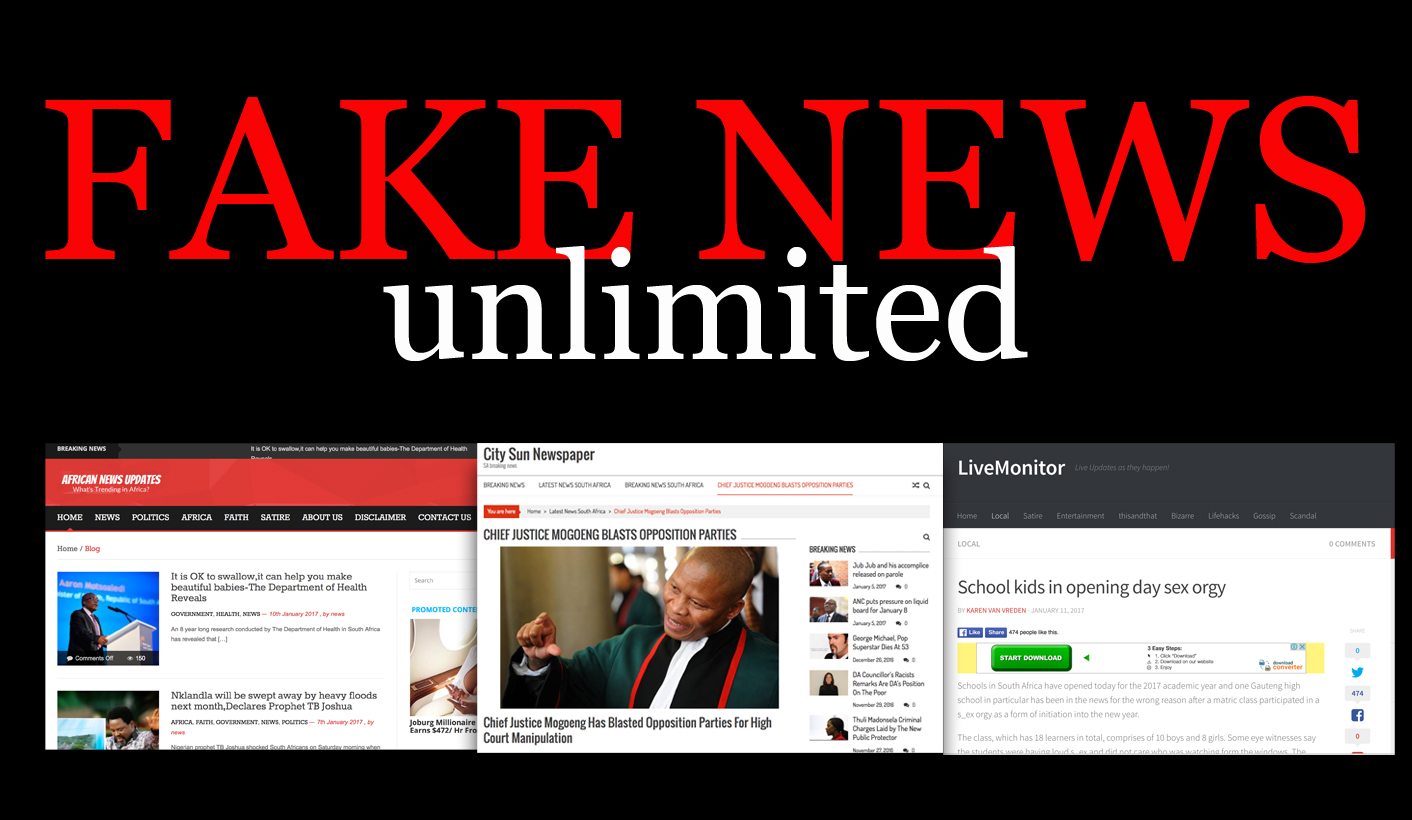 There’s an alternative world in which Desmond Tutu has passed away, a sex-tape featuring late singer Mandoza and a white woman has just been released, and men can easily circumcise themselves at home. It’s the universe in which South Africa’s fake news websites operates. Last year the country woke up to the fact that it’s not just America dealing with fake news – but has anything actually changed since then? By REBECCA DAVIS.

Did you know that Health Minister Aaron Motsoaledi is advising South African men to perform DIY circumcisions? Are you aware that ANC Secretary-General Gwede Mantashe has submitted his resignation to President Jacob Zuma? Has anyone told you that antiretroviral drugs fell out of EFF leader Julius Malema’s pocket during a meeting?

If not, you probably don’t follow any of South Africa’s fake news websites – though you may have been urged to click on their content at the suggestion of Facebook. All these stories are untrue, yet published – without reference to their fabrication – on a number of local websites which all seem to have sprung up within the last few years.

The story about Motsoaledi urging men to undertake their own snips had been viewed at least 2,500 times at last count – small fry by the standards of the mainstream media, but a fairly alarming quantity given the negative health implications.

“Fake news”. It’s a phrase that few people used before late last year. In America, the issue suddenly became one of white-hot concern in the wake of the November election result, when liberals realised that a series of misleading articles about Hillary Clinton run by numerous news sites may have actively contributed to Donald Trump’s victory.

South Africa was ahead of the curve in this regard. Months earlier, government departments were already issuing denials on the back of false news reports related to government function. In August 2016, the Independent Electoral Commission opened a case with the police after a website published a story claiming that almost 100,000 local government election ballot papers had been found pre-marked with ANC votes.

The website responsible for that story was African News Updates, registered to one Thulani Msibi. That’s the same website that recently ran the story about men circumcising themselves at home, so there’s little evidence that even the threat of a criminal case had a chastening effect.

One of the complicating factors when it comes to South Africa’s fake news problem is that there are many shades of fake, as Media Monitoring Africa’s William Bird points out.

“We have found that some of these sites don’t only use made-up nonsense, but they sometimes copy directly from more reputable news sites,” Bird says. “So on a site you might find nonsense, but then also a fairly normal news story. What also makes it tricky is that our news in South Africa is often so bizarre that you could be forgiven for thinking it’s made up.”

Sometimes such sites also publish basically accurate stories, but with misleading headlines. “Court Order: Pravin Gordhan Must Step Down”, reads a headline in October from the City Sun website. The real story is that activist Andile Mngxitama’s Black First Land First movement had filed papers with the North Gauteng High Court asking the court to compel Gordhan to step down. Many would say that mainstream media outlets are often guilty of the same disassociation between headline and story, albeit not to the same degree.

So, is the phenomenon something to be concerned about? The South African National Editors’ Forum (SANEF) certainly thinks so, warning in September last year of the “alarming trend” of fake news websites publishing inaccurate information. Government followed suit a month later, saying this false information “can be harmful to the citizens and the country as a whole”, and urging South Africans to exercise caution when sharing news online.

But government also reminded South Africans that if a fake news website was identified as such, there is recourse. “The Electronic Communications and Transactions Act of 2002 states that Internet Service Providers Association (ISPA) has a mandate to shut down websites that are not credible,” communications director-general Donald Liphoko said. “Therefore, members of the public are encouraged to approach the internet service provider directly to lodge a complaint.”

A Daily Maverick inquiry to the Internet Service Providers Association as to whether any websites have been shut down in this way thus far went unanswered.

At least one local fake news site has met its end as a result of action taken against it, however. A website called T1meslive, which was clearly seeking to capitalise off the similarity in its name to the legitimate TimesLive site, received its comeuppance in October last year. That was after TimesLive took the owners of T1meslive to the South African Institute of Intellectual Property Law (SAIIPL) in October last year. In its complaint, TimesLive raised its concern that the T1meslive administrators “might be seeking to damage the TimesLive brand”.

SAIIPL found that what was happening there was a form of “typosquatting”, the term for when people deliberately register misspelled domain names in order to drive traffic to their website. In the past, the owners of “standerdbank.co.za”, “sterkinikor.co.za” and “kalula.co.za” have all been slapped down.

In the case of T1meslive, the SAIIPL determined that a different type of typosquatting was occurring: “In this case, the misspelled domain name clearly intends to gain legitimacy in the eyes of the unsuspecting reader of its news site, based on the reputation of [TimesLive]”. The domain T1meslive was duly transferred to TimesLive, which promptly shut the site down.

The owner of T1meslive never showed up to contest the charge, so his or her identity was never revealed. This is the case for almost all the owners of these sites, who seem determined to remain anonymous even at the risk of losing their domains.

They also tend to use bylines of imaginary journalists; often white women. A site called Live Monitor features countless articles by one “Karen van Vreden”, who does not exist. Neither does “Jade Wilsons”, who is responsible for most of Gossip Mill Mzansi’s stories. Jade Wilsons is described on the site as a “down to earth entertainment blogger”, but her profile pic is taken from a Pinterest board about African-American bridal hair.

Why bother setting up a fake news site? There are a few possibilities. One is that the website is established as part of a misinformation campaign for political gain, as the Mail & Guardian suggested might be the case with the City Sun website, which tends to publish fabricated pro-ANC and anti-opposition stories.

Another possibility is that the website is intended to sabotage or undermine mainstream news sites, as TimesLive seemed to be suggesting in its complaint against T1meslive.

The most likely motivation, however, is that people are creating fake news sites for money: in particular, the ad revenue. A Buzzfeed investigation last November found that students in Macedonia were making $5,000 per month from ad revenue generated from fake news sites about the US elections.

In response to this, Google announced it was taking steps to crack down on such sites by banning them from using Google AdSense.

Contacted by Daily Maverick to find out if any South African sites have yet received this treatment, Google South Africa said it could not comment on individual sites.

“We have updated our publisher policies and now prohibit Google ads from being placed on misrepresentative content,” a Google spokesperson said. “Moving forward, we will restrict ad serving on pages that misrepresent, misstate, or conceal information about the publisher, the publisher’s content, or the primary purpose of the web property.” This would seem to apply to at least 10 local websites identified by Daily Maverick.

The Google spokesperson added that the public can report “misrepresentative content” to Google here.

Even if Google does take action against the sites, it may not strip them of a revenue stream. Local site Mzansi Live – which is currently leading with a fabricated story headlined “Caster Semenya jets off to Korea for penis transplant”, alongside accurate news reports – responded to an inquiry from Daily Maverick with advertising rates stretching to almost R13,000 per month. The site sent evidence that it was averaging 70,000 views per day.

Some of the sites are clearly aware of the crackdown on fake news – and even go so far as to take a swipe at fake news. In an Inception-esque twist, for instance, Live Monitor is currently running a story correcting the claim of another website that gospel star Lundi Tyamara had died.

“A report by what appears to be a fake website claimed the award-winning singer had died,” it reads. “The fake story has since gone viral, with fans on social media expressing shock over Lundi’s “death”.

African News Updates, meanwhile, takes pains to explain why it is not a fake news website.

Satire, it appears, is in the eye of the beholder – as is what constitutes fake news. Other articles devoted to the phenomenon of South African fake news have cited as an example the site Viral Bru, which appears to mostly share viral videos.

The owner of Viral Bru, who preferred to be identified only as William, was adamant in his response to Daily Maverick when approached.

“Viral Bru is the furthest thing from a fake news site. What is fake about the content we share on our site?” William asked. “We are a website that tries to source new/fresh/viral content as soon as it comes out. Period.”

Asked if the site takes any steps to verify the authenticity of the material it posts, he replied: “We try our best… but this is not always possible. If we feel something is not legit, we don’t share it.”

The distinction between very poor attempts at satire and fake news is sometimes hard to draw, which is the defence that fake news websites can hide behind. Media Monitoring Africa’s Bird says the organisation is working on developing “a simple click button option, where the user can click to see if the article is fake or not”. As Google and Facebook have already discovered, however, the classifications are often not clearcut.

In the interim, Bird has some practical advice for readers unclear as to whether the news they are consuming is factual or not.

“Fake news websites seek to avoid lawsuits, so they tend not to name sources, or use made-up names,” he says. “If the news story involves a famous person, check other news sites or social media – chances are that a big breaking story like that will be on other sites as well. If it isn’t, hold off sharing until you have verified it.”