ANC at 105: Succession endorsement grabs spotlight as Zuma dances off the stage 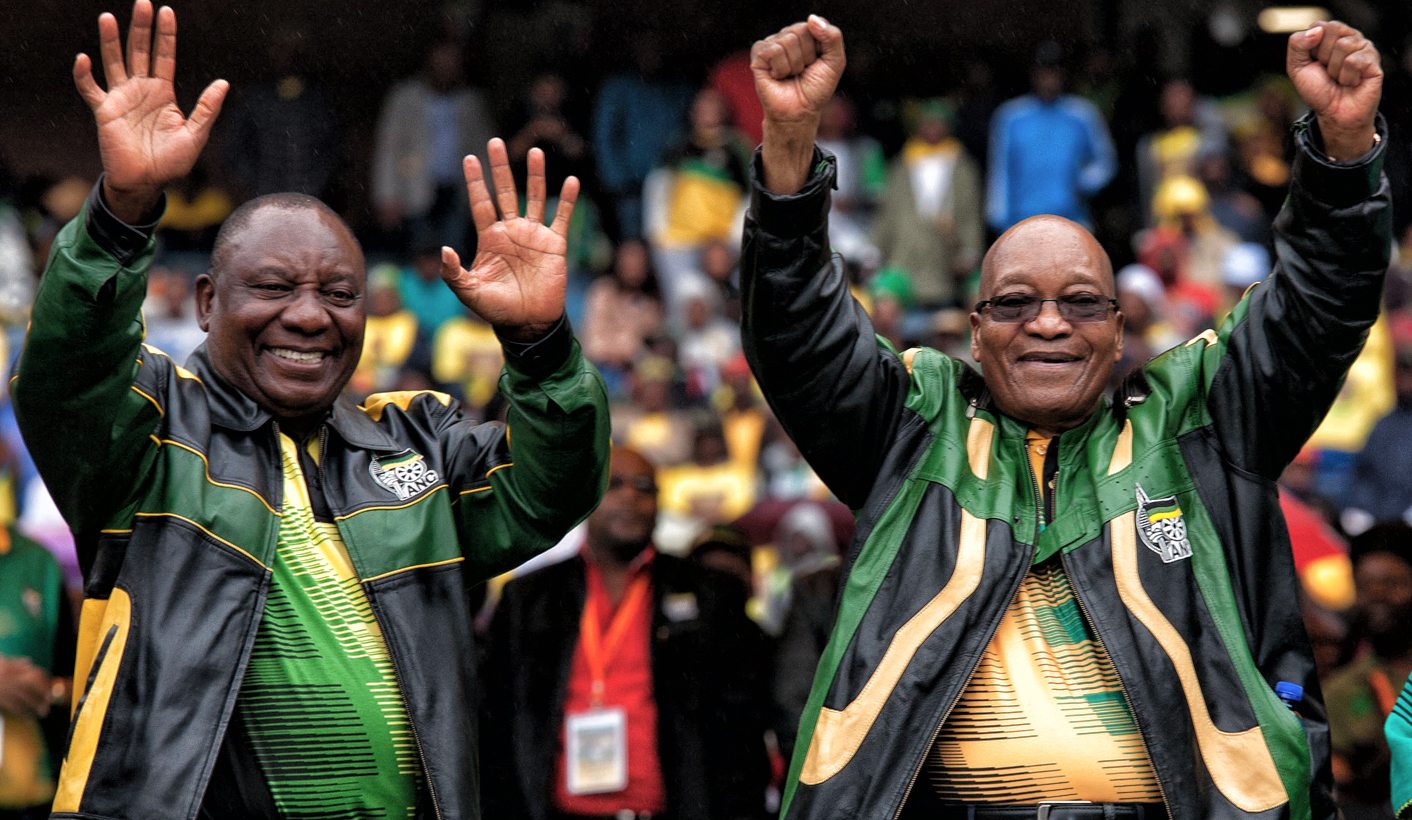 The ANC’s 105th anniversary celebrations went off without a hitch – in that nobody got booed, no structures collapsed due to adverse weather, and supporters turned up in large numbers and stayed for the duration of President Jacob Zuma’s speech. All boxes ticked; no major embarrassments or disasters to have to explain away. The big talking point was not Zuma’s speech – not that it ever is – but the ANC Women’s League’s (ANCWL) surprise announcement on Saturday night that Nkosazana Dlamini-Zuma was their presidential candidate. So, welcome to 2017, the year of the ANC succession battle. By RANJENI MUNUSAMY.

In an interview with the Gupta-owned television station ANN7 on Sunday morning, ANC national executive committee (NEC) member and Water and Sanitation Minister Nomvula Mokonyane boldly declared that the ANC’s anniversary celebrations would by no means be Zuma’s “last dance”. Responding to a question about Zuma’s final January 8th speech as ANC president, Mokonyane said:

She also credited Zuma’s “groundbreaking interventions” and “wisdom” in guiding structures of the ANC. Mokonyane is of course well known for her feisty protection of the president, including her declaration that she would use her buttocks to defend him. There were not many other ANC leaders willing to cast Zuma as the main attraction of the anniversary celebrations, considering the controversies hovering over him and attempt from within the NEC to remove him from office.

Zuma did not participate in most of the mobilisation activities in the build-up to the main rally on Sunday, apart from an appearance at Soweto’s Vilakazi Street on Friday. But as ANC president, he had to deliver the main address at the rally, which turned out to be a considerably abridged version of the NEC January 8th statement.

If the party was aiming to inspire confidence after an awful year, in which it lost support at the polls and waded through numerous scandals, it was not reflected in Zuma’s speech. He simply went through the motions – a lap around Orlando Stadium waving to the crowds, a generic address that could have been delivered at any of the past five years’ January 8th events, and his signature Yinde Lindlela performance to round up.

He preached unity, decried factionalism, condemned corruption and discouraged ill-discipline. There was no acknowledgement that the ANC was at a crossroads and needed to adapt or die. The only reference to “mistakes” was in the context of the local government elections.

“We accept that we have made mistakes and shall correct these mistakes. One example of correcting our mistakes is that where list processes have been manipulated, the ANC has sent teams to these regions to take the necessary corrective measures. The ANC is in the process of refining our approach to the selection of candidates to prevent manipulation of ANC list processes.”

Unsurprisingly, there was no mention of last year’s other commotions, including a challenge to Zuma’s leadership from party veterans and within the NEC, or the damning allegations of state capture implicating him and his friends, the Guptas. The ANC’s anniversary celebrations are about showcasing the party’s strengths, not reflecting and analysing leadership failures and the party’s shortcomings. If that were the case, it would be ANC NEC member Joel Netshitenzhe delivering the main address.

While this might not have been Zuma’s last dance, it was, mercifully, his final delivery of the ANC’s January 8th statement. A new ANC leader is to be elected at the party’s 54th national conference in December. While Zuma’s term as state president expires in 2019, the change in party leadership means that power will shift away from him to whoever will succeed him as ANC leader. And it is this race that will be the main political story in South Africa in 2017.

The ANC’s plans to contain the succession battle until later in the year were scuppered by a surprise statement from the ANCWL on Saturday night. It was no secret that the ANCWL, backed by the Zuma-aligned faction known as the “premier league”, would rally behind Nkosazana Dlamini-Zuma as the next ANC president. What was a surprise was the announcement of her candidacy on the eve of the January 8th rally, particularly after the ANC NEC asked its structures to respect party processes and not jump the gun.

It is possible that the premier league, led by the premiers of the Free State, Ace Magashule, North West, Supra Mahumapelo, and Mpumalanga, David Mabuza, and which includes the ANC Youth League, were anxious about Deputy President Cyril Ramaphosa’s emboldened statements on Friday. The usually demure Ramaphosa called for lifestyle audits “right at the core at the top of the leadership” and claimed people went around with money stuffed in the boots of their cars to buy votes at ANC conferences.

As ANC deputy president, Ramaphosa is the most obvious choice to succeed Zuma and was also promised the support of the Zuma camp when he was roped back into active politics in 2012. But the premier league believes Ramaphosa will upset their political and business network and grip on the state and therefore wants Dlamini-Zuma as their candidate. There is no indication that Dlamini-Zuma, one of the longest serving members of the NEC and the first woman likely to contest the ANC presidency, has agreed to maintain the status quo or entertain the premier league’s agenda.

The ANCWL said after a two-day NEC meeting that “after careful consideration and opening our eyes as wide as possible, Cde Nkosazana Dlamini-Zuma is the only suitable candidate at this point in our history to lead the African National Congress in December 2017”.

“We come to this conclusion based on her credentials and footprint in the African National Congress spanning from 1971 to date. Her meticulous nature and search for excellency can be seen in all the projects she leads and her latest being her election into the chairperson of the African Union. [Sic]”

The league’s defiance of the ANC by pronouncing publicly on the succession battle heralds a break with convention and the rules of engagement. While Cosatu pronounced its support for Ramaphosa late last year, no ANC structure has defied the party line. In his speech on Sunday, Zuma said the power of ANC branches should “not be undermined by slates and lobby groups”. But the leadership elections at both the 2007 and 2012 ANC conferences, in Polokwane and Mangaung respectively, were determined by factional slates and it would be extremely difficult to change the practice now.

The premier league is likely to play by its own rules, as is evidenced by this (rather unfortunate) line in the ANCWL statement:

“The ANC WL National Executive Committee is well aware that journey to non sexism is not a one-man show. We fully understand that patriarchy is not ready to give up all its privilege without a fight. [Sic]”

Ramaphosa’s support is not as clear-cut as Dlamini-Zuma’s and because of his diffident stance up to now, people have been reluctant to stick their necks out for him. In order for his campaign to get off the ground, he must define himself clearly and pronounce his game plan for the ANC and the country.

It is likely to be a year of high drama and hard politics in the ANC with a new president, new top six and new NEC emerging in December. While Zuma might keep dancing for a while longer, the necessary shift in power is reason for hope and fear.

Do not place any bets. Yet. DM