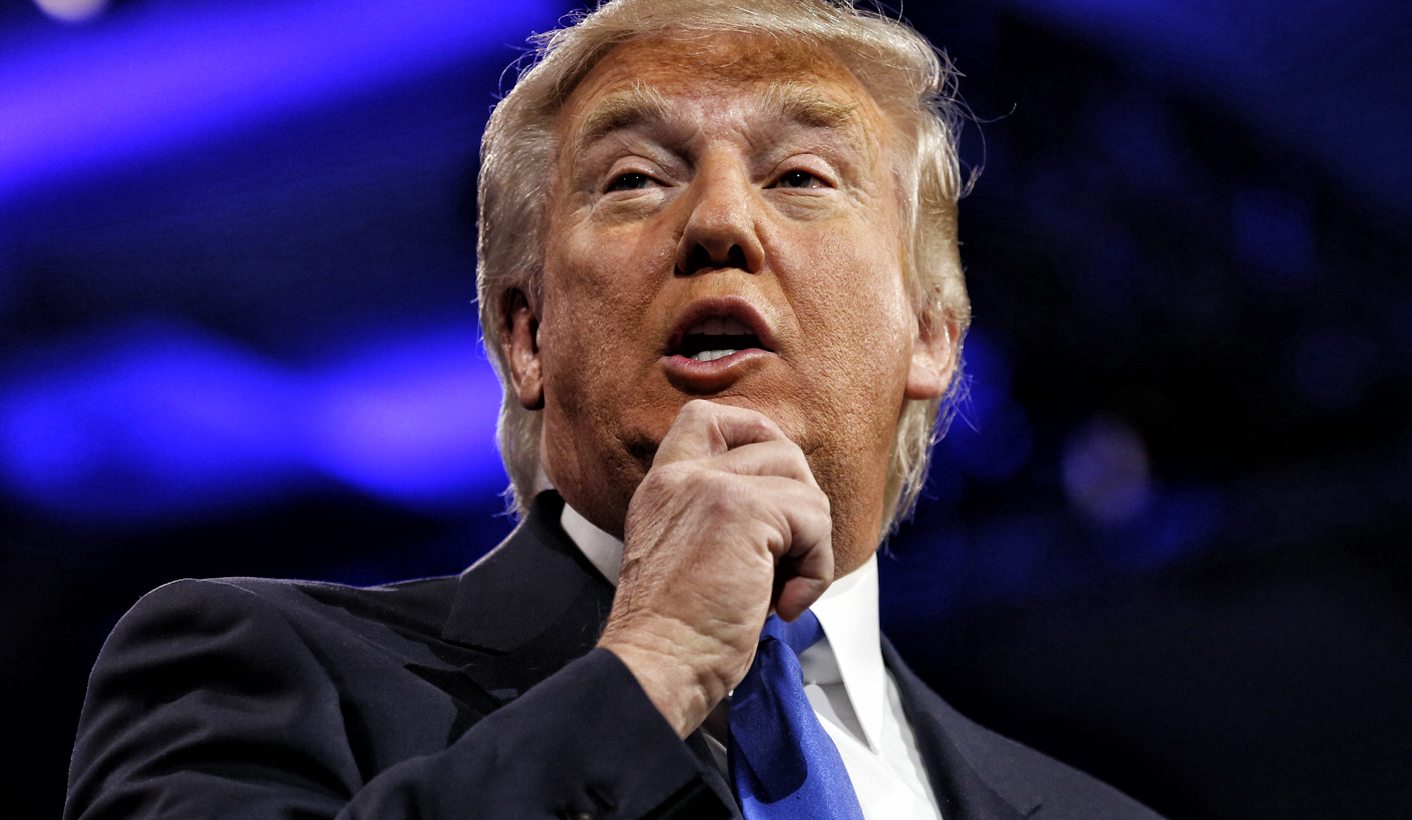 The world’s health and medical communities wait with concern – even trepidation – to hear more about Donald Trump’s attitude to global health security. By WILMOT JAMES.

There is a great deal to worry about. President-elect Trump appears determined to relax those environmental regulations that put a cost burden on businesses, the consequences of which – such as increased pollution and environmental degradation –  will probably increase risks to public health.

Despite the science community’s most compelling consensus on the subject ever, he denies the measurable reality of climate change, putting him at odds with epidemiologists who model the spread of infectious diseases on observable changes in global temperature, rainfall patterns and transforming eco-systems in which disease vectors such as the Zika-bearing mosquitoes reproduce.

He has signalled a desire to pull back from the US’s global commitments and the provision of aid that go with these.

He appears driven by the intent to reverse Barack Obama’s legacy in global affairs, possibly including the White House-initiated Global Health Security Agenda (GHSA) that was galvanised by the horrifically deadly West African Ebola outbreak.

At the October 2016 launch of the Johannesburg-based Brenthurst Foundation Special Report on Ebola titled 11,312 Unnecessary Ebola-Related Deaths: Building Citizen Trust in Health Systems, at Washington DC’s Newseum, Rosa DeLauro, who serves on the US Congress’s House of Representatives’ Appropriations Committee, gave an outline of the scale of recent commitments.

Congress, DeLauro noted, after costly delays caused largely by Republican obstruction, awarded nearly $800-million (R11.14-billion) to support the GHSA where $597-million (over R8.32-billion) will be spent through the Center for Disease Control and Prevention (CDC) and $200-million (R2.79-billion) through USAID. An additional $2-billion (R27.86-billion) will go to the National Institutes for Health (NIH) for priority health science research, which is now funded at an all-time high of $32.1-billion (to give the figure perspective, R447.15-billion is under three times South Africa’s public health budget and about a third of our national budget). The Pentagon spends a monumental amount of money (a senior defence official once remarked that Africa’s entire spend on health is a rounding error for the Pentagon) on protecting their soldiers against infectious diseases abroad. It has done so over decades, which is why its agencies lead in disease detection and vaccine development.

All of this translates into invaluable support to at least 30 countries – in Africa, Egypt, Kenya and South Africa in particular – to achieve the GHSA’s health targets. More than $1-billion (R13.93-billion) has been directly pledged to strengthen and expand the GHSA, a collaborative initiative over 50-nations-strong today, whose goal is to prevent, detect, and respond to future infectious disease outbreaks by activating a global network that can respond rapidly, effectively and professionally.

South Africa is an important beneficiary of US assistance and should become a leading player, deploying government, parliamentary, business, academic and civil society resources, in delivering the GHSA in Africa and the South. Under the ANC-run national government, focused as they are on internal factional battles under the divisive and corrupt President Jacob Zuma, such an intersectoral approach to solving the African continent’s considerable health problems is simply not on the table. For his part, Health Minister Aaron Motsoaledi is so ideologically blinkered that he does not seem to realise that government cannot tackle the health agenda alone.

It was for this reason that a team of us that included Geomer’s Marcel Golding, Medical Research Council’s (MRC) Glenda Gray, University of Kwazulu-Natal’s Koleka Mlisana and Nombulelo Magula, and the Human Sciences Research Council’s (HSRC) Leickness Simbayi, went on a study tour of the US’s key health science institutions, hosted by the State Department. The purpose was to learn first-hand how the US organises its health science institutions and to discern which South African health assets could be leveraged to assist in the global effort to improve infection disease prevention, detection and mitigation in Africa.

We met with many world-class health science leaders.

At the NIH we engaged with the legendary Dr Anthony Fauci, Director of the National Institute of Allergy and Infections (one of 27 Institutes at the NIH), an HIV/AIDS clinician, who has poured funds into HIV/AIDS research and vaccine development in South Africa. Fauci and his research team developed a threefold battle plan against AIDS: researching the HIV mechanism, developing and testing drug therapies, and creating an AIDS vaccine.

We were mightily impressed by the medically trained professional soldiers led by Dr Nelson Michael at the Walter Reed Army Research Institute (WRAIR), the Pentagon’s largest and most diverse biomedical research laboratory that carries out neuroscience (brain fitness) and infectious diseases research globally. The WRAIR combines expertise in the development of vaccines and drugs for prevention and treatment of diseases such as malaria, HIV/AIDS, dengue fever, wound infections, leishmaniasis and enteric diseases. At the time of our visit, they were well advanced with vaccines to prevent Ebola and Zika.

We were pleasantly surprised and delighted to meet a fellow South African, Dr Adre Du Plessis, a pediatrician originally from Pretoria, who today is the Director of the Fetal Medicine Institute at Children’s National Hospital in Washington DC and who, with a pediatric infectious disease specialist Dr Roberta DeBiasi, led their congenital Zika virus programme. The first of its kind in the US, the programme provides expecting families with a comprehensive diagnosis and care plan for dealing with the awful consequences of microcephaly and other as yet poorly understood neurophysiologically debilitating consequences of Zika viral infections.

In Atlanta, we heard the perspective of Emory University’s Global Health Institute on their collaboration with South Africa’s National Institute for Communicable Diseases (NICD), our highly regarded biosurveillance and disease detection agency led by Dr Shabir Madhi and Dr Janusz Paweska, the latter the head of our Special Pathogens Unit who, with his team, provided on-site mobile diagnostic sample results during the West African Ebola outbreak.

Across the way from Emory is the campus of the Center for Disease Control and Prevention (CDC) which in the emergency centre front office has a control room that seats – looking much like the Kennedy Space Centre – over 1,000 specialists behind their computers facing a monumentally large real-time disease surveillance series of television screens; which, in the back office, is driven by the professional effort of well over a thousand health science PhDs collecting and interpreting mass data on disease outbreaks from across the world.

It is smaller versions of the CDC that are envisioned for Africa under the CDC-African Union agreement, primely funded from the R8.32-billion supplemental GHSA Congressional grant, presently in development. The idea is to establish regional public health institutes in Zambia, Uganda, Egypt, Gabon and Nigeria that link up with public health institutes in every African country; those who do not have them yet, are obliged to establish and build. South Africa is far advanced on this front: the Public Health Institute of South Africa, a more vigorous version built of existing institutions like the NICD, is awaiting finalisation by Parliament during 2017. The CDC also funds pathogenic disease detection programmes in South Africa, Kenya and Egypt.

Are these programmes under threat with the ascendency of Donald Trump as US President? The Republican record in Congress and Trump’s utterances suggest a reluctance to support anything more than that which serves the narrow US self-interest. In these terms, funds to deal with diseases like HIV/AIDS, already on the phase-out under Pepfar, will come under pressure. On the other hand, programmes that fund what are defined as threats to national security like Ebola, Zika and other killer bugs, will presumably be much safer from cuts.

What is South Africa’s contribution to the GHSA in Africa? We have the largest assembly of medical schools and public health academic faculties, a critical mass of biomedical scientists and physicians, a fast developing biotechnology and biomedical engineering capability and the most advanced national public health entities in Africa. We have the assets to assist with health workforce education and training, diagnostic and biosurveillance technological innovations for use in poor countries, and biosafety programmes for laboratories. The profound changes that come with the ascendancy of Trump are a threat to the current global health architecture, but also an opportunity to craft a different approach to health security that requires more and not less co-operation between nations to deal with health threats that recognise no national borders. DM

Dr Wilmot James, MP, is DA National Spokesperson on Health who led the Study Group for Global Public Health Security, hosted by the US Department of State, Washington DC and Atlanta GA, 2-12 October 2016.