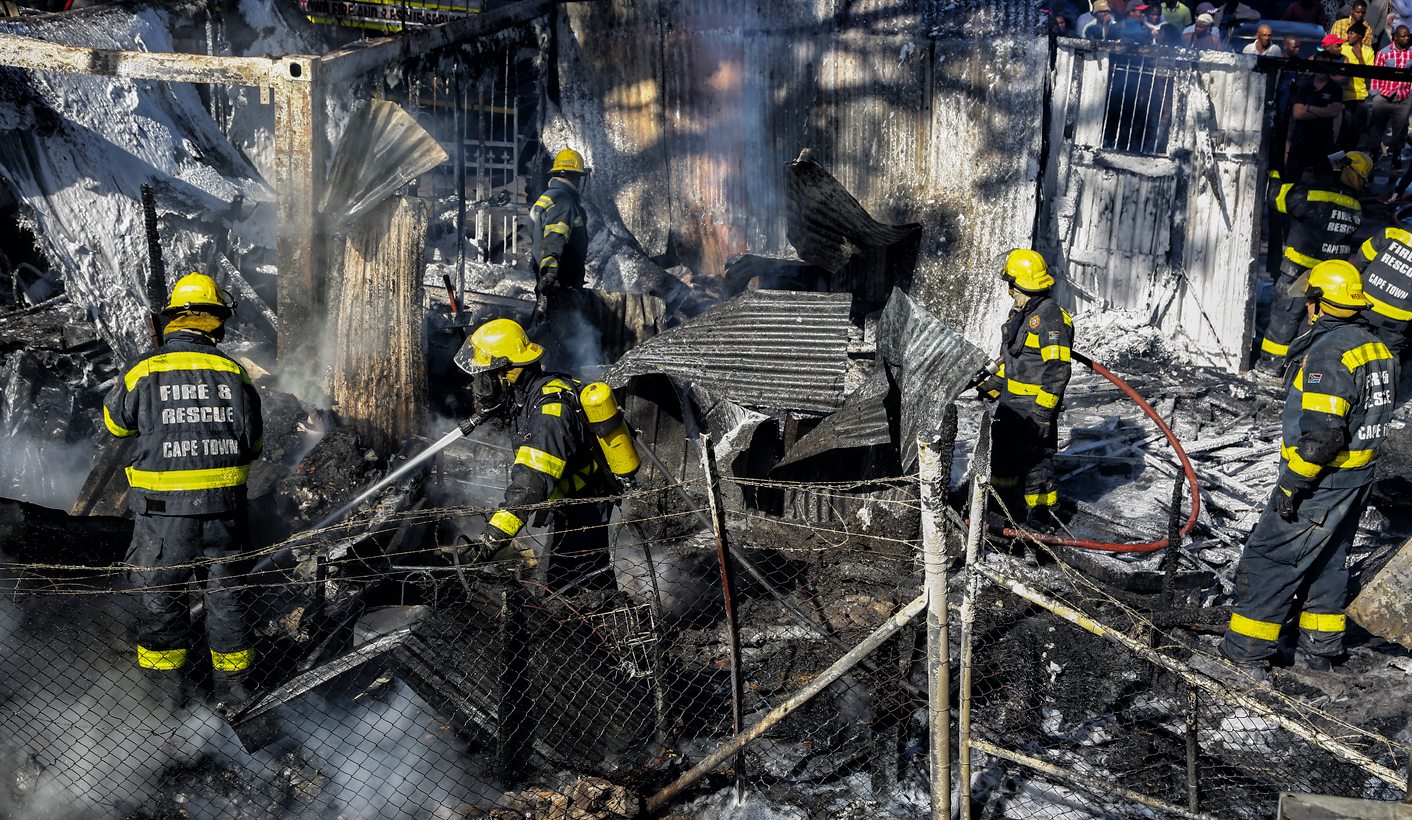 It’s the festive season for all, but for some, who live in close proximity and without electricity, it’s also fire season. In the last week, hundreds of Cape Town people have lost their homes in shack fires, and they won’t be the last. Meanwhile, emergency service delivery is facing challenges of its own. By MARELISE VAN DER MERWE.

In just over a week, the latest fire in Kosovo, Cape Town, left 120 people homeless. The chairman of the community leaders’ forum, Lonwabo Jako, blamed the same resident for devastating fires in 2013 and 2014. In Masiphumelele, meanwhile, another 40 homes were destroyed and 110 people left homeless, with the City of Cape Town and a number of NGOs delivering emergency relief. That fire spread after a stove was left unattended.

Understandably, residents who lose everything – including, sometimes, loved ones – as a result of neighbours’ negligence are frequently devastated, traumatised and enraged. Anxiety levels run high throughout the high-risk season. In Masiphumelele, which has a history of vigilante killings, it is not uncommon for those accused of starting shack fires to flee in fear.

Shack fires pose an immediate and traumatic threat to the residents, but should be of economic concern to the rest of the city as well. A decade ago already, the effect of fires in informal settlements had driven a major increase in the social services budget for disaster relief, and they are not decreasing.

It’s something of a perfect storm: a lack of infrastructure, overcrowding, lack of access to electricity, lack of access to water, unfavourable weather conditions and human error. Mayoral Committee Member for Safety and Security, Alderman JP Smith, told Daily Maverick that the most common causes of shack fires were “negligence related to substance abuse, candles overturning and igniting bedding, [and] heating or cooking devices that are left unattended or tip over”.

But residents and activists say there’s a difference between what ignites a fire and what causes a devastating blaze.

Bandile Mdlalose, general secretary of Abahlali baseMjondolo, earlier observed, “A lot of people have died in shack fires, but there’s nothing we can do, and the government always shifts the blame back to the people.”

Certainly, human error sparks many of the fires, but the cumulative effect of the residents’ living conditions make the consequences more devastating, more quickly. It’s not unheard-of for residents of brick-and-mortar houses to drink alcohol, bump a candle or forget to turn off a cooking device. But because basic safety standards are present and infrastructure is more supportive, fire is less likely to break out within such a residence – and less likely to spread so fast.

City officials have argued that the dense layout of townships, and narrow alleys, make it more difficult to provide emergency services quickly, although local government has now invested in skid units that are a little more nimble, and has begun “reblocking”, i.e. organising homes to improve accessibility. Reblocking, however, can be both a costly and emotional process, and space remains a challenge.

More recently, further complications have arisen with an increase in stoning attacks on firefighters in areas such as Klipheuwel, Khayelitsha, Retreat, Vrygrond, Dunoon, Elsies River, Manenberg, Philippi and Nyanga, where residents were reportedly upset at the emergency services’ response times. In some of these incidents, there has been disagreement among community members regarding whether the firefighters should be allowed to proceed to the site. The conflict between residents and firefighters frequently resulted in further delays, which compounded extensive damage and the original distress.

The problem, therefore, is a complex one, and the finger of blame is quick to swing. But most agree – at some point – that the most pressing problem is infrastructural. The Social Justice Coalition’s Dustin Kramer previously pointed out, “It’s easy to blame residents as if it’s their fault, but the reality is that in Cape Town there are over 200 informal settlements, over 140,000 households, and we have to accept that informal settlements really require serious planning and intervention.”

Cape Town is currently the second-most populous urban area in the country and is growing rapidly. The pressure for access to water, housing and electricity is increasing. After the past week’s fires, Ward 88 councillor Siphiwo Nqamnduku lamented the long history of fires in the area and said there was a desperate need for more adequate housing. Others say that while this is the eventual ideal, there is no time to wait for long-term housing plans. Abahlali baseMjondolo, shortly after it lost two of its members to extreme weather conditions, said that the nature of informal housing was in itself the core problem and that more creative, immediate solutions were needed.

“It’s taking too long. People are waiting from the 1990s up till now. It would be better [to] use this [housing] budget for in-situ upgrading. As it is the places are so risky they can’t even put electricity on that lines,” said Nsibande. In Nsibande’s view, the best long-term solution would be to decentralise economic opportunity in order to begin to reverse the major influx towards urban townships.

But none of this will occur in time for the dry season of 2016/2017. And for the coming months, the prognosis does not look good. The trend is that residential fires in general and shack fires in particular are on the rise, despite an overall decrease in fire incidents. Official statistics from the high-risk season – which runs from November to April – reflected a drop of over 1,000 fire incidents between 2013/2014 and 2015/2016, but an increase in the number of fires in both formal and informal residences over the same period; proportionally, therefore, shack fires have occupied a larger share. The informal units affected in 2015/16 increased to 3,981 from 2,358 in 2013/14. According to the City’s records, over 130 people died as a result of shack fires last year alone.

The number of risk factors, meanwhile, remains significant.  While higher rainfall is predicted in areas expecting summer rain, higher than average temperatures are expected overall, particularly in regions where summer is dry.

The City says it is doing all it can to manage the disaster on a micro level, including deploying more firefighters and new equipment. But while infrastructure is unfavourable and emergency services are – by their own account – hamstrung by a combination of conflict and geographical accessibility, interventions will likely still have limited impact. The City says it has held over 800 fire and safety awareness sessions annually and has increased its efforts to assist pre-emptively, distributing hand-held fire extinguishers, fire blankets, solar-powered lamps and warning devices such as horns to at-risk residents. It has also recently embarked on a project to paint homes in four informal settlements with fire-retardant paint, an eco-friendly substance that expands to form a heat shield when exposed to flame. Currently, says Mayoral Committee Member for Human Settlements, Councillor Benedicta Van Minnen, the City is working with the South African Red Cross Society, the Mustadafin Foundation, and HDI (Historical Disadvantaged Individuals) in the event of a fire, providing blankets, food, baby packs and vanity packs, and emergency shelter.

But for residents facing an annual threat of destruction, or a lurch from emergency to emergency, the ultimate solution must be a permanent one. That has been – and likely still will be – a long time coming.  DM