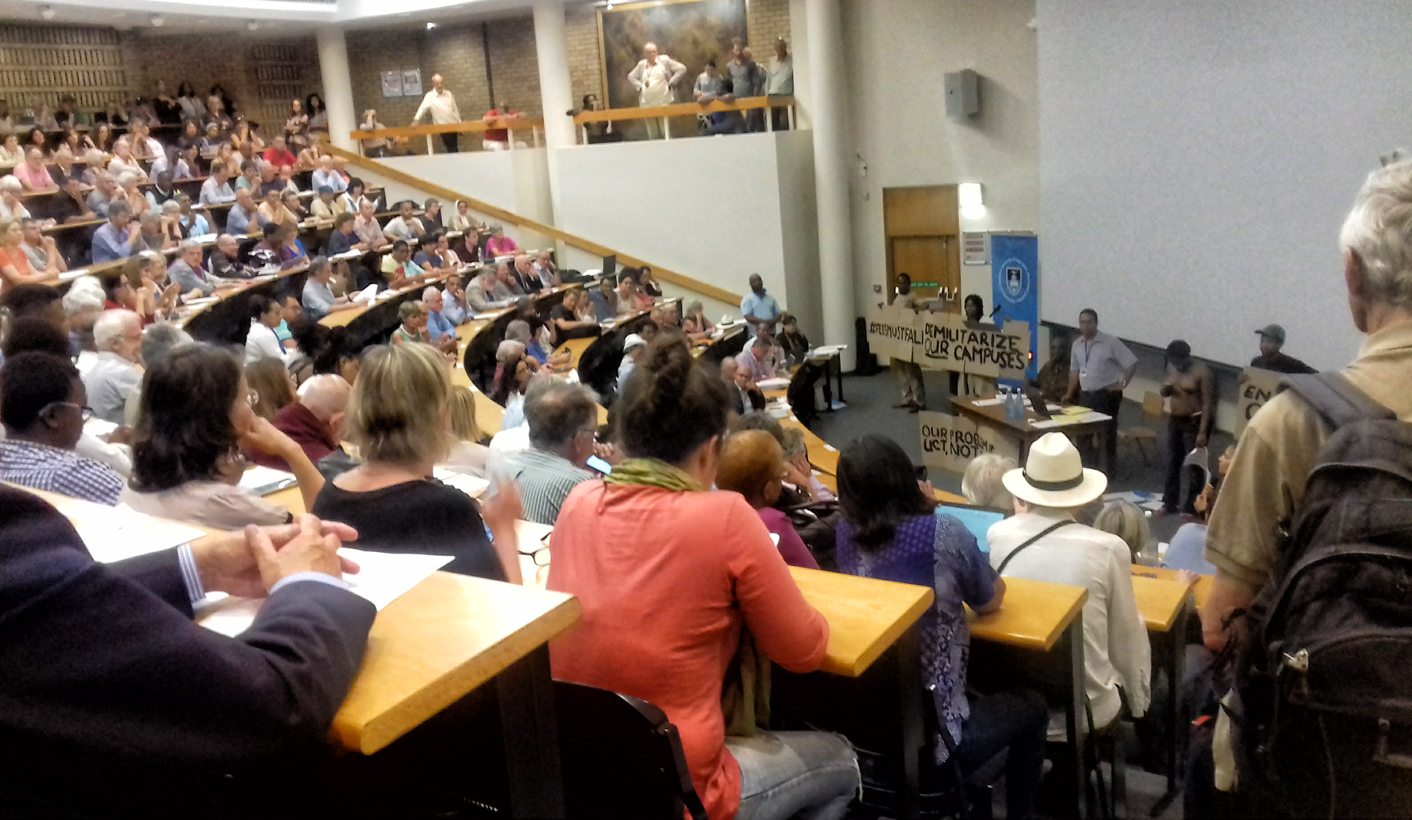 The University of Cape Town (UCT)  Convocation AGM descended into chaos on Thursday evening. It was marked by shouting, interruptions, insults and booing. Some attendants criticised president of convocation Barney Pityana for his handling of the meeting, but it is unlikely anyone could have chaired it successfully. By NATHAN GEFFEN for GROUNDUP.

The meeting was extremely noisy, with numerous interjections and heckles. Few speakers identified themselves by name. And there was not enough documentation for all the attendants, including this reporter. It is therefore impossible to report the event as accurately as we would like.

The meeting started at 5:30pm and ended at about 8pm. Little was achieved. The main concern was a motion of no confidence, proposed by Timothy Crowe,  in vice-chancellor Max Price and the senior UCT executive for its negotiated agreement with Fees Must Fall  protesters on the eve of UCT’s exams. It’s unclear what the implications would have been had the motion passed. Council, not Convocation, employs Price. And although the meeting was well-attended — the lecture theatre on middle-campus was overflowing  — it represented a tiny fraction of the university body, though it is possible Crowe wanted a further ballot put to the entire university.  In any case the motion did not appear well-supported, based on the widespread applauds in response to a critique of it  by Advocate Geoff Budlender, though we cannot know for sure because the meeting closed without it being voted on.

Shortly after the meeting began, and a number of minor quibbles were settled, Fees Must Fall protesters walked in front of Pityana, holding up banners. A protester removed her shirt to expose her breasts  and remained that way for the rest of the meeting.

One of the protesters attempted to speak but was booed by a large number of people. A heated debate ensued. Dr Lydia Cairncross proposed that the Fees Must Fall protesters should  be allowed to hold a silent protest.  Budlender seconded the motion, and  the meeting  proceeded calmly, at least for a short while.

Pityana  then delivered a speech, surrounded by protesters, in which he favourably cited  Wits vice-chancellor Adam Habib’s  criticisms  of some aspects of this year’s student protests and their academic supporters. But Pityana  also welcomed the issues raised by the student protesters.

When it was Price’s turn to speak he asked the barebreasted protester not to stand in front of him.  After a brief exchange of words  she took her place alongside him.

Price defended the agreement he reached with the protesters, pointing out that it allowed exams to proceed without disruption. He said that the protests had wide support though only a minority favoured disruption and a university shutdown. He also explained some of the complexity of dealing with the protests. Admitting that the academic year was not completed entirely successfully he pointed out that about 16,000 students wrote exams. He listed statistics demonstrating the excellent academic performance of UCT, including that the number of A-rated researchers has  doubled since he became vice-chancellor in 2008.

Then  Crowe  was given an opportunity to explain  and move his motion. At this point the meeting became increasingly unpleasant  as the number of insults and interjections grew. When Budlender  attempted to explain why he opposed Crowe’s motion, Chumani Maxwele persistently interrupted him, accusing Crowe of being a racist. Pityana however refused to allow Maxwele  to speak. Eventually  Budlender spoke, explaining that because one might disagree with the decisions taken by the executive that doesn’t justify a no-confidence vote. He described Crowe’s motion as unreasonable. His was loudly applauded.

Cathy Powell from the Law Faculty then spoke about the failure of the executive to consult staff during negotiations with the protesters, but a kerfuffle on the opposite side of the lecture theatre made it impossible to hear her. A  protester  shouted “Shut up you bitch” repeatedly. It was clarified for this reporter  that the owner of a campus food outlet and his staff had started their own protest on the other side of the theatre, holding up posters with threats allegedly made at them by Fees Must Fall protesters. These included: “You come back @ work at your own risk”, “You come here you die” and “We will kill you bitch”. It appears the convocation protesters misinterpreted these posters as being aimed at them, when in fact they were meant to depict the threats they or their fellow-protesters allegedly made. The ensuing argument was ugly and the meeting, despite a few moments of clarity, never got properly back on track.

Pityana made an effort to calm matters and condemned the use of the word “bitch”, but he endured constant interjections. At this point members of convocation began to trickle out the venue.

Former SRC president and current COO of the South African Institute of Race Relations Gwen  Ngwenya then attempted to speak, but she was continuously interrupted by Maxwele. Eventually she managed to make a point that her lack of confidence was  in the agreement reached with the protesters on the eve of exams, rather than in the individual members of the executive. She argued that you can’t negotiate for non-violence; it’s a constitutional given.

Cairncross then spoke against the motion of no-confidence, arguing that the reconciliation commission agreed to on the eve of exams was  in the  entire university’s best interests.

Following some argument on points of procedure, Pityana asked if there were any proposed amendments to the no-confidence motion. Gao  Nodoba from the Faculty of Commerce said that he agreed there should be a no-confidence motion in Price and the executive but for very different reasons to those given by Crowe. He accused the UCT executive of not supporting transformation and the student demands until they were forced to. He accused the executive of carrying out “indecisive, visionless fixes” and “inconsistently applying institutional rules”.  He proposed an amended motion of no-confidence which was welcomed by the protesters.

Much interjection and  shouting followed this. Eventually Professor Hugh Corder  moved that the debate be closed and voting proceed. This was voted on 102 versus 15 (many didn’t vote and many more had left by then). The protesters became incensed at this point, as did Nodoba who wanted to know why his motion hadn’t been voted on (or perhaps debated further – it wasn’t clear). It’s possible  that it was Pityana’s intention  to allow such a vote, but it became increasingly obvious that the meeting had become  unmanageable and there were not enough people left to have a meaningful vote on anything. Soon thereafter Pityana  closed the meeting, apparently because it was simply impossible to continue it. DM

Photo: Protesters stand at the front of the UCT convocation AGM.