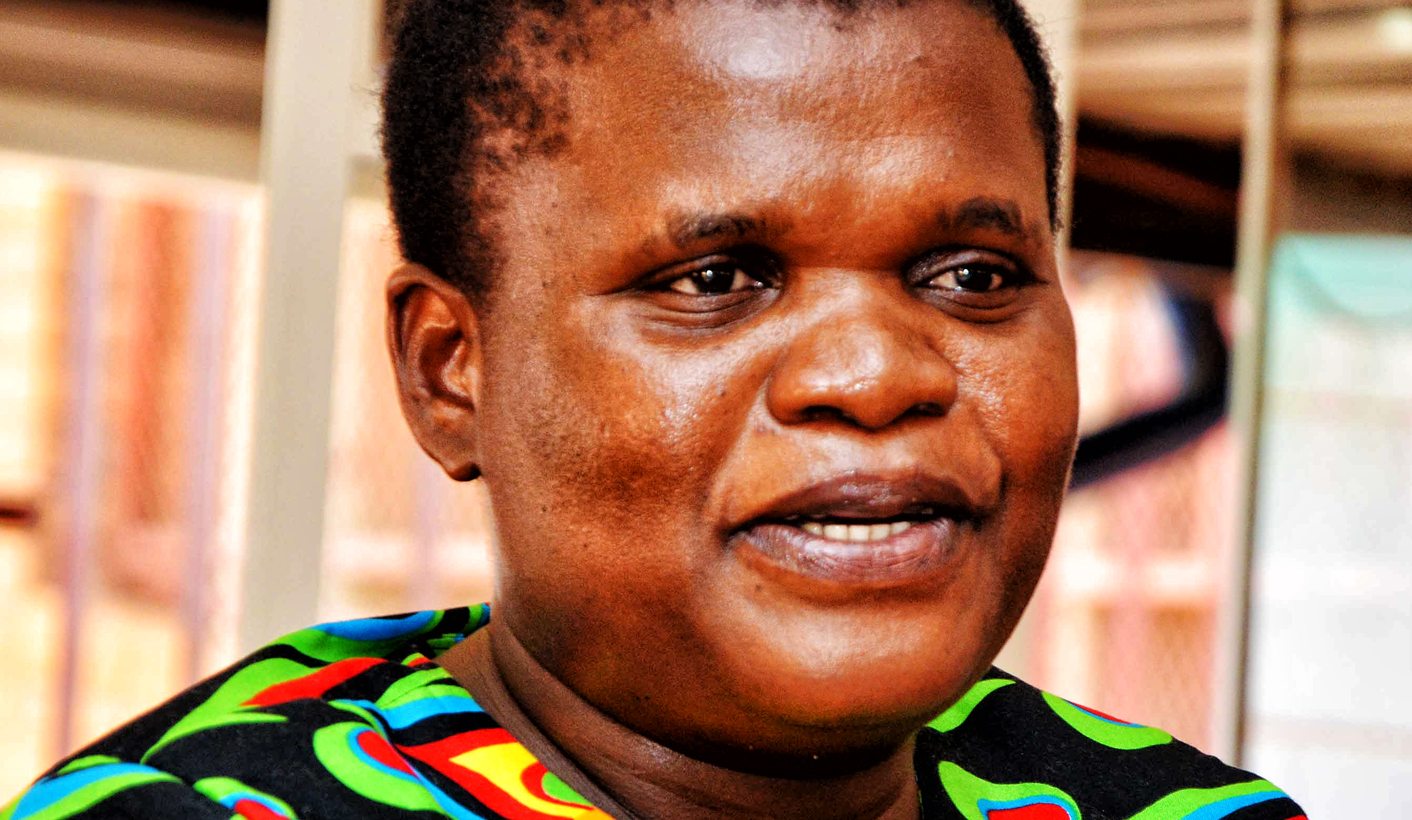 Minister of Communications, Faith Muthambi, the state’s key representative as stakeholder in the public broadcaster and who has featured as one of the main players in the drama surrounding the implosion of the SABC under Hlaudi Motsoeneng, puckered the hot seat at Parliament’s ad hoc committee inquiry into the SABC on Wednesday. She gave a sterling performance, side-stepping awkward questions and tossing the ball right back at the collective – Parliament as well as MPs – for allowing the rot to fester under their watch. By MARIANNE THAMM.

The emerging narrative that ANC members should collectively be held responsible for the major cock-ups under President Zuma’s watch was dusted off and put to good use by Minister of Communications Faith Muthambi who faced a grilling on Wednesday at the Parliament’s ad hoc committee inquiry into the SABC.

Muthambi essentially reminded MPs, particularly those from the majority party and who were grilling her, that she was not alone in having appointed Motsoening and that members of Parliament’s portfolio committee on communications should shoulder the blame.

“At the end of the day, that was the decision of the portfolio committee. It is good that I was not alone. The ruling party exercises its majority role,” Muthambi stated defiantly.

The morning kicked off on a sinister note when chair Vincent Smith informed those gathered and the thousands watching the televised proceedings that some of the journalists who have come to be known as the SABC 8 had received further death threats.

Some of the members were having none of Muthambi’s shifting the blame, reminding the Minister that it was she who had blocked other members or individuals from being considered for the board and that it had been she who had turned a blind eye to it all, amending the Memorandum of Incorporation (which overrode the Broadcast Act) bestowing enormous powers to herself and Motsoeneng.

At some point Muthambi asked the committee chair to “protect me here”.

Muthambi did some deft footwork trying to explain the difference between “editorial policy” and an “editorial decision” when it came to censoring news about protests that Motsoeneng had said would stoke further violence and rebellion.

“There is no editorial policy that advocates censorship. There was an editorial decision made with that regard but it is not policy,” she told members.

Van Damme asked whether it was a coincidence that there had been a blackout about news of  violent uprisings in Vuwani which just happens to be Muthambi’s constituency.

“You don’t think it is a wild coincidence that suddenly the SABC puts forward an editorial decision, that the Minister of Communications who has access to the SABC would be able to do that?” asked Van Damme.

“I think this issue is a fantasy; the decision was taken long after the Vuwani matters. I don’t work at the SABC,” replied Muthambi and then, for a good measure, accused Van Damme of “grandstanding”.

Muthambi spent the first part of her presentation laboriously explaining various legal mandates and acts leading up to her coup de grace, that her hands were clean and the entire mess was due to the incompetence or competence – depending on which side of the hill you sit – of other officials and minions.

It is clear that Muthambi is going to seek refuge in the technicalities of the law, explaining that Motsoeneng was appointed in spite of the damning Public Protector’s report because there had not been legal clarity on the binding nature of remedial action at the time and because she thought it was justified.

Asked by ANC committee member Jabulani Mahlangu whether there was any justification for a massive increase in his [Motsoeneng’s] salary, Muthambi blamed the board whom she said had to account to the portfolio committee.

She also blamed the A-G, saying the sudden spike in expenditure had not been picked up by the A-G.

When asked who it was that could fire the board, Muthambi replied, “the appointing authority. Yourself, you can fire a board member”.

In other words – ball back in your court, MPs.

With regard to the sale of the SABC archive to Multichoice, Muthambi said this was done to raise funding for the SABC in preparation for DTT and that once again, in this matter “the SABC had to come and account to Parliament”.

Ball still in your court, MPs.

Besides, she added, ICASA itself had said there was no national archive. “I have it on record from a meeting I attended,” said the Minister.

Committee chair Vincent Smith butted in at this point warning Muthambi, “If South Africans are denied the crown jewels because of this transaction under your watch you will come and account for that. The point we are making is if this thing happens it will be on your watch because it is contrary to the act.”

Smith added, glowering at acting Chief Executive James Aguma, who was part of the SABC delegation that had initially walked out with Professor Maghuve but who have all subsequently apologised for disrespecting Parliament, that if he was in any way responsible for hiding Motsoeneng’s salary increases from the A-G “you will be held personally accountable. The PFMA (Public Finance Management ACT) says you must prevent it.”

When Muthambi was asked by the ACDP’s Steve Swart about the SABC executive head of procurement, Madoda Shushu’s testimony that procurement processes had been sidelined under Motsoeneng, Muthambi said Shushu should have reported it then under the Prevention of Corrupt Activities Act.

“I really have to look at the position of Mr Shushu. The act is very clear, it says you must report it to officials. At that level we are now sitting with evidence that he is an accomplice in the committing of this crime,” said Muthambi breezily.

And so the whistle-blower is turned into a potential criminal.

Muthambi was reminded that she had been made aware of the accusation she too would be obliged to report this to police.

“This is a matter of grave concern. It relates to Mr Motsoeneng’s involvement. You seem unaware that he is a law unto himself,” said Swart.

Muthambi, like board chair Professor Mbulaheni Maguvhe on Tuesday, played dumb for the most part on Wednesday saying she did not know about the R43-million Motsoeneng had wanted to spend on a studio, and that she had not been present when Motsoeneng had been appointed permanently on the recommendation of his own lawyers.

By then ANC MP Dr Makhosi Khoza appeared to have had enough and ripped into Muthambi.

“Minister. There is a public outcry about how SOEs, including SABC, are run. Now minister, there has also been an outcry that the ANC leadership, which includes all of us, have become arrogant. This was admitted by the SG of the organisation. Indeed this is not a figment of the public imagination.”

Khoza said that she was certain the Minister had perused the terms of reference for the ad-hoc committee and that she had to be aware that “we have had witnesses here, lots of witnesses who have come before this committee and they have put the blame of SABC failure squarely on you as a minister. Mr Motsoeneng wielded power with such impunity. They have also attributed the failure of governance at the SABC to the portfolio committee of which, at some stage, you were a member.”

Muthambi replied, “The governance failure of the SABC should not be attributed to the shareholder… it should be a collective responsibility.”

“Are you exempting the shareholder represented by yourself?” asked an astounded Khoza.

“I am not exonerating myself. I will take responsibility. The shareholder compact in MOI together with Companies Act define my role as the shareholder, these problems did not start when I was there. If the board itself is failing its fiduciary duty that is not my competency and space and that is why we are here in Parliament today.”

Vincent Smith picked up the thread at this point, reminding Muthambi that her duties as a minister included oversight of the board.

“What do you understand by this? You keep saying Parliament is responsible, absolving the shareholder.”

The EFF’s Fana Mokoena then laid into Muthambi, asking how she could have condoned the appointment of Motsoeneng in light of the Public Protector’s report.

“At the time there was no legal decision on the matter and the advice was that remedial actions were not binding at that time but that was later clarified,” said a cool Muthambi.

“I don’t accept that you say it as if it is global logic because the president didn’t understand you also did not understand,” thundered Mokoena.

At the end of it all, Muthambi denied that she had had any relationship with the Gupta family or that she had ever told board member and only witness the late Hope Zinde that “uBaba loves Hlaudi”. She said she quite fancied Gupta-owned The New Age breakfast deal with the SABC (at the SABC’s expense, members have heard) because it offered “an opportunity for ministers to interact with the public and give feedback”. DM