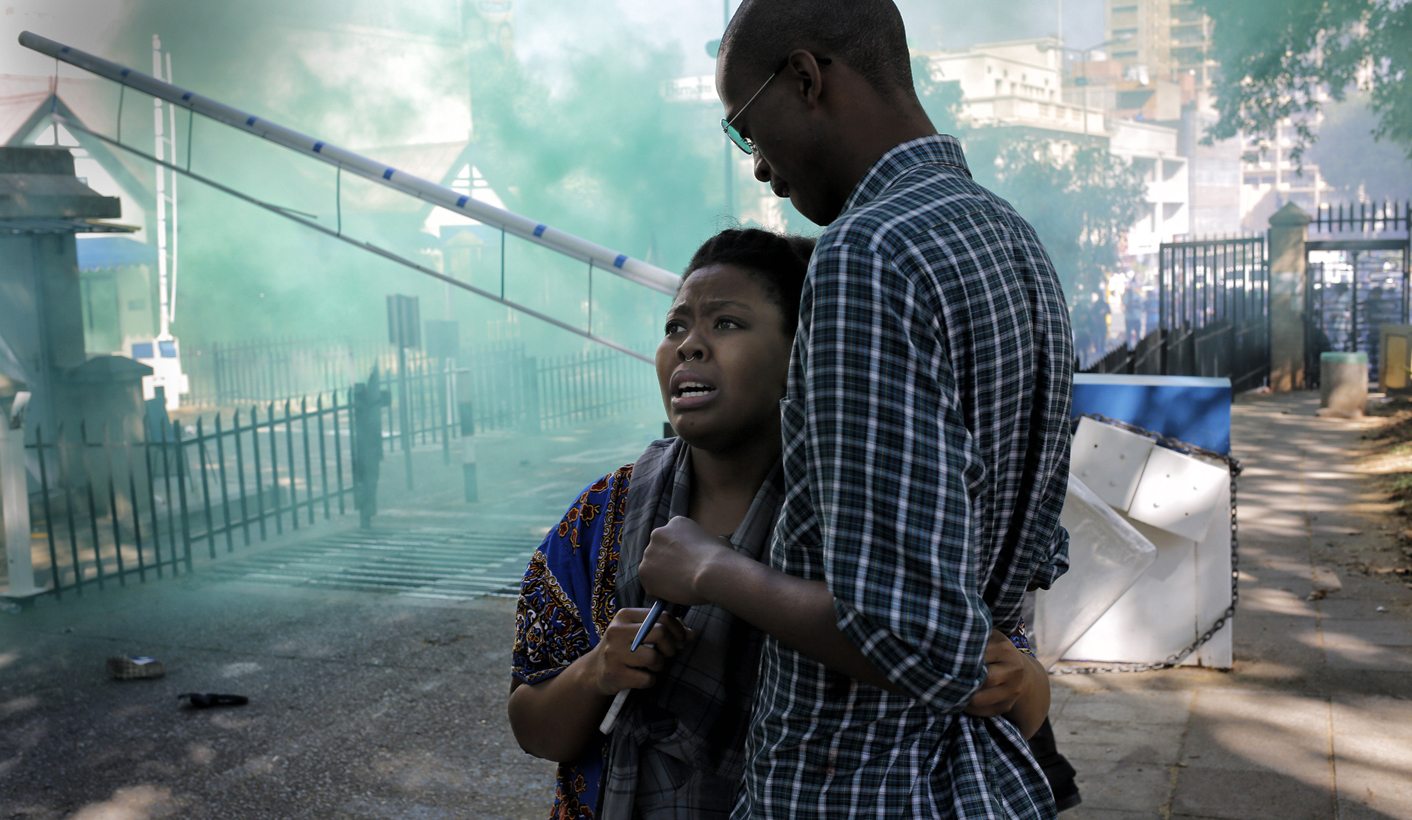 IN the lull following the violence of student protests and the increased use of private and state security on certain campuses, introspection seems to be the order of the day. Articles in the Daily Maverick by Adam Habib, Jane Duncan and Jeremy Seekings have illuminated different viewpoints on the violence. By DENVER A. WEBB.

Nelson Mandela Metropolitan University (NMMU) was thankfully spared the scale and intensity of violence seen on some university campuses, but NMMU did not emerge entirely unscathed.

In the week-and-a-half following attempts to resume lectures on 18 October, the campus resembled a war zone. Police and some protesting students engaged in running battles. Acts of violence included the blockading of entrances; burning of tyres; intimidation; stoning of police who were breaching student barricades; the shooting of protesters with rubber bullets, and the use of stun grenades and tear gas against protesters.

A sport clubhouse was torched. In another arson attack a social centre, the Alumni Campus Boma, was burnt to the ground. Students and staff attempting to continue with lectures were intimidated and driven out of classes by small groups of protesting students, sometimes accompanied by security staff. On two occasions groups of protesting students smashed windows and damaged the bodywork of staff motor vehicles. A petrol bomb was flung at a police water cannon.

Few people would disagree that the protesting students have highlighted serious shortcomings in government funding of higher education. They have also exposed the failure of the national project since 1994 to create a united, peaceful, prosperous and more equitable society. Attempts to address extremes of poverty and inequality in South African society have been exposed as glaringly inadequate. The call to broaden access to higher education and demands for quality, decolonised higher education are to be welcomed. But do the ends justify the means?

Can violence in a democracy ever be justified? Can violent action by a small group aimed at ensuring the majority conform to their views be acceptable? It is easy to understand the frustration of student protesters who feel disconnected from a government that is seemingly disinterested in engaging meaningfully with them. Understanding the escalation of violence in the face of government (in)actions is, however, not the same as condoning it.

It seems a futile exercise to play the blame game, trying to identify whether it was the government and university management that provoked the violence or whether it was protesting students. The two are interlinked and indicative of a more substantive challenge facing South African society: when and under what circumstances is violence acceptable in a democracy that subscribes to the rule of law?

The violence of service delivery protests and the violent aspects around the #FeesMustFall actions are manifestations of deeper societal issues we should be confronting. One key question is whether we are seeing the inevitable consequences of the systematic erosion of respect for state institutions and the rule of law under the Zuma administration? This is a more important question than “who started the violence”.

The colonial and apartheid order used laws and legal processes to dispossess, subjugate and exploit the majority of the country’s population. Establishing the rule of law in society based on the principles of our Constitution was always a fragile process. The Mandela and Mbeki administrations made progress in this regard, but the Zuma era has seen a different message emanating from the centre of power. Notwithstanding this, and in a situation where our body politic seems to be ailing, it is important to cling to every vestige of decency left in the situation. The malignancy of corruption and the disregard for ethics and principles at the highest level appear to have infected other parts of society, not least student protests.

NMMU prides itself on being a values-based university where respect for diversity, excellence, Ubuntu, integrity, respect for the natural environment, and taking responsibility permeate academic programmes and the administration. The conduct of some during the protests would suggest that these principles and values have not been internalised by all. On the other hand, a significantly large number of students and staff who obviously subscribe to these values pulled NMMU back from the abyss at the last moment during the worst days of violent protest.

In his condemnation of violence Habib refers to “liberal and left-leaning academics” whom he criticises for not condemning the violence. This is problematic at several levels. There are many who are perceived to be on the left or who are “left-leaning” who do not endorse, implicitly or explicitly, violence in this situation. Does that make them reactionary?

NMMU, especially after the damage to staff cars, faced a similar situation. Certain employees describing themselves as “concerned staff” put forward a seemingly sophisticated argument that student violence was justified because of structural violence in society. This is a slippery slope that ironically utilises the same logic exposed in the 1969 American student protests against the Vietnam War, that “Bombing for peace is like fucking for virginity”.

More profoundly, can behaviour condoning violence in a constitutional democracy ever be “progressive”? Is vanguardism, the idea that a small group of radicals is somehow privy to advanced views that justify overturning the wishes of the majority, justified in these circumstances? Is it in fact not profoundly undemocratic, possibly even counter-revolutionary behaviour? If so, then we need to recognise things for what they are and begin to address the broader societal causes of the violence that plagued some of the student protests and institutional responses.

The goal of universities is not just to churn out graduates, but to produce well-balanced, responsible and productive members of society who can contribute to the development of our country, our continent and ultimately our world. Universities can only produce graduates whose attributes include ethical and principled behaviour if they behave in that manner as well. The medium is the message. Therein lies the crux of the matter: Can this be done when the values universities seek to inculcate are undermined by the example set by some of the leaders occupying the highest offices in the land?

The title of Chinua Achebe’s 1958 novel, Things Fall Apart, springs to mind. The words contained in W.B. Yeat’s famous poem from which the title derives are even more apposite, “Things fall apart; the centre cannot hold/ Mere anarchy is loosed upon the world.” No less a personage than Thabo Mbeki used these sentiments at the opening of the XIII Summit Conference of the Non-Aligned Movement in Kuala Lumpur in February 2003 to warn against the violence and polarisation blighting the hopes and dreams that initially flowed from the end of the Cold War.

In similar fashion, the hopes and dreams that followed on South Africa’s transition to political democracy have all but evaporated. Mbeki’s words are even more relevant today, “[W]e must insist that the centre must hold. We must position ourselves in word and deed as the enemies of anarchy.”

Mbeki returned to Yeats in several other keynote addresses. Most notably, in 2006 he delivered words that are very appropriate when some of the country’s leadership appear blinded by the worship of Mammon and where the commodification of higher education has become entrenched. Criticising the worship of private wealth, he argued, “I believe that for us to ensure that things do not fall apart, we must in the first instance, never allow that the market should be the principal determinant of the nature of our society.”

As universities prepare for the resumption of operations in 2017, and as the ruling party engages in its much-vaunted introspection, we would do well to ponder on these issues. DM

Dr Denver Webb is the Acting CEO of the Nelson Mandela Metropolitan University’s (NMMU) Trust, the fundraising arm of the university, which raises funding for financially needy students. He is also an adjunct professor in the Faculty of Arts at NMMU.

Photo: An injured student from Wits University is helped by a fellow student after being injured when police force fired a stun grenade during the third day of #FeeMustFall demonstrations against fee increases at universities across the country in Johannesburg, South Africa, 21 September 2016. EPA/KIM LUDBROOK