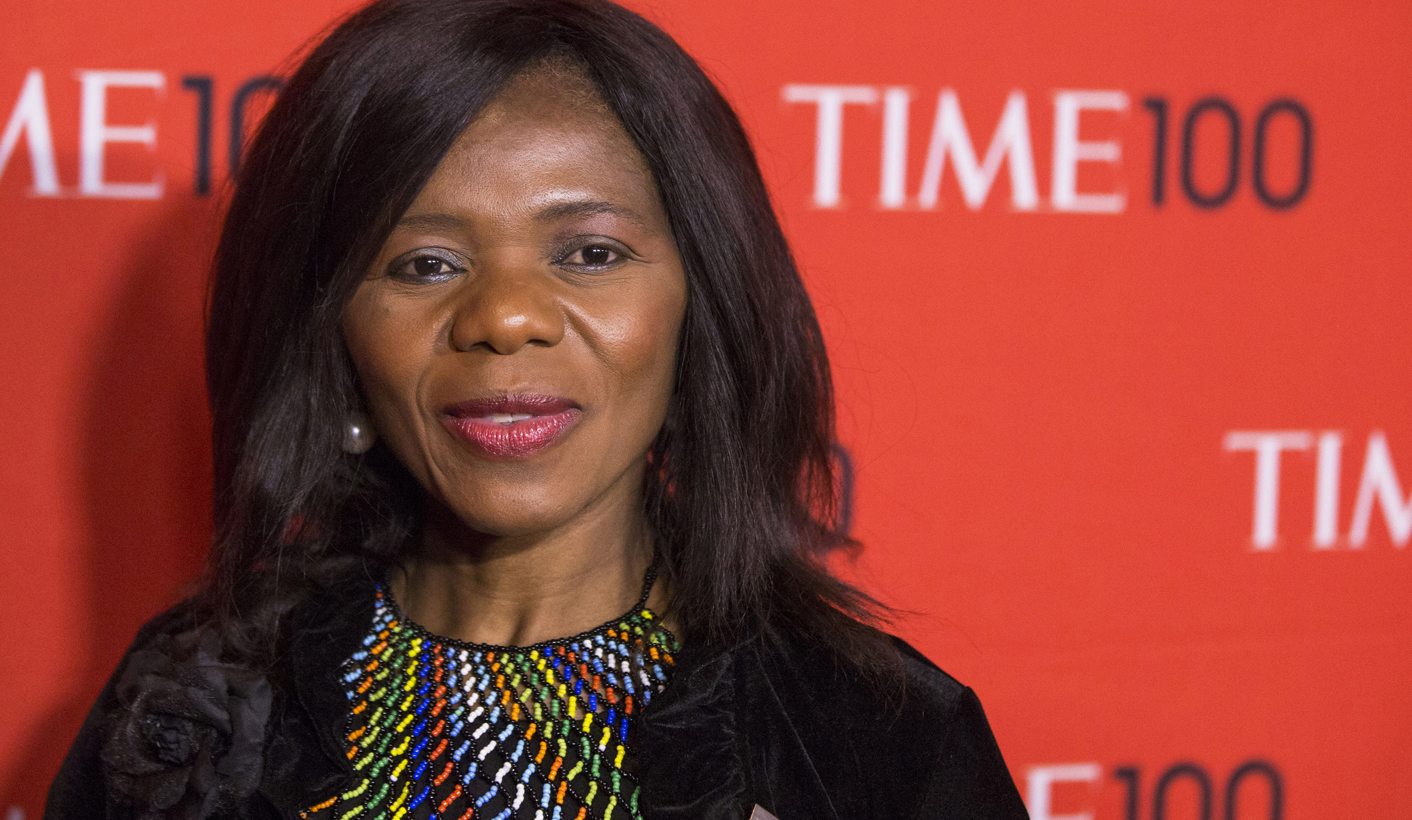 2016 was the year we lost David Bowie, Leonard Cohen and Alan Rickman, and gained US President Donald Trump. It was a year in which, locally, we got a lingering and malodorous whiff of some of our deepest cesspits of corruption. But it was also the year in which Advocate Thuli Madonsela delivered some of her best-aimed punches. Her tenure has been described as a “seven-year legal masterclass”. Here, in her own words, is former Public Protector Thuli Madonsela. By MARELISE VAN DER MERWE.

Ubuntu says I am because you are: our future can only be better if we work together and help improve each other’s lives.

Where shouting loudly can so easily form the dominant narrative, it’s refreshing and intriguing to watch Advocate Thuli Madonsela: that unwaveringly soft-spoken, even tone, which ended up thundering across South Africa and the rest of the globe. In the post-Mandela era, where disillusionment dominated, she became a new symbol of resistance for many.

TIME magazine described her as displaying “extraordinary courage and patriotism” in her fight for “Constitutional reform, land reform and the struggle for the protection of human rights and equality”.

In her term as Public Protector, which ran from October 2009 to October 2016, Madonsela made headlines chasing down some of the country’s biggest scandals, from Julius Malema’s 2012 tribulations to former police chief Bheki Cele’s grand undoing (which prompted his infamous “she is not God” comment) and the endlessly disillusioning sagas of Nkandla and the Gupta family.

But perhaps what endeared her most to the public was not only her relentless willingness to fight the good fight or the impeccable cool with which this was executed; but also that, unlike less successful leaders, she managed to retain a sense of being in touch with the people she was serving (usually sprinkling this with eminently quotable tweets). She herself put it:

“Be the kind of leader that does not need a title.”

In describing her intended contribution to the country in 2013, she spoke of the rights of ordinary South Africans. In an interview with Corruption Watch, she voiced her distress at being unable to help everybody, saying, almost apologetically, that she and her office made every effort to refer and advise if a case fell outside of their mandate.

Perhaps always a human rights lawyer and activist at heart – also with traces of her past as a teacher and unionist creeping through – Madonsela had much invested in keeping the country’s powerful on the straight and narrow, having given up a Harvard scholarship to help draft the Constitution. A cautious optimism, despite multiple disillusionments with said Constitution, shone through when she said,

“At times we have to stand alone with only hope as our companion. If you stand for the truth and do so long enough, hope does eventually pay.”

The new generation of South Africans, she added, wanted a world they could call their own, where there is social justice, things are run properly, and people are able to prosper.

But greedy leadership, she cautioned, would continue to prevent this. Shortly after releasing the State of Capture report, she posted the following on Twitter:

“Just as the power of water often lies in the ability to bend around obstacles, sometimes the most powerful step you can take is a step back.”

Will the politicians who have fought so hard to cling to power remember it? Unlikely. Has she made her share of enemies? If you can count them, you can keep them. Is she going to have battles ahead? Probably.

But to hear it from the horse’s mouth, it’ll be hard work to get her down. Here’s Thuli Madonsela in her own words.

Tough job, but somebody’s got to do it

My key goal was to enhance the office’s effectiveness in meeting the ordinary person’s administrative justice needs. I told Parliament I would place emphasis on Alternative Dispute Resolution (ADR). I also wanted to improve public access visibility and trust. The impact of the office in strengthening constitutional democracy was also a priority.

My fears included my ability to lead a team I had not chosen or groomed. I was also concerned about my investigative skills, hence I immediately attended courses to enhance my competencies in this area. I was also a little concerned about the politics of the job.

We didn’t know if ordinary lunatics or just unstable people on the ground could feel incited to harm me.

I often feel that some of the expectations exceed our capacity to deliver, given that we are a team of less than 300 full-time employees plus 100 trainee investigators with a budget that is less than R200-million – even after a thoughtful increase from Treasury.

A few ministers have written to seek clarity on methodology. Only three investigated ministers publicly complained that I was unfair, and only one observing minister publicly accused me of strange things. I am yet to receive evidence of from him despite several requests.

A little bird tweeted it

Sometimes we feel like and regret being oddballs, yet it is our uniqueness that makes each of us fit for our individual purpose in life.

When stuck in a hole, the victim asks, “who can we blame for existence of the hole or getting us in it” while the leader asks how do we get out.

If you consciously choose to be a positive influence in the world, you will always find opportunities to make a difference.

It’s not the fear of failure that stops us from acting to achieve our goals, but the fear of disapproval, as by not acting we choose failure.

We step out in hope that a better world is possible because of our love for peace and faith in humanity’s capacity to make better choices.

Let me explain leadership to you slowly…

We need to recognise and enhance the culture of being a servant of citizens, and not a servant of government, as a prerequisite of the public service delivery programmes.

Through life I have learned that the most important critic whose judgement of my actions matters is my conscience.

Be a leader who does not need a title.

It seems that the firmness with which I make decisions was not expected from a woman.

Nkandla became… a test, really, of how far I could go, together with my team, to stand for what we believed was right.

For us it is not about you refuting people’s allegations‚ Sir… For example my first question would say‚ if you can explain what is your relationship with the Gupta family‚ how it started‚ when and how did you meet the Gupta family? I would ask you to describe your relationship with the Gupta family and if they are your friends‚ and if they are your friends‚ for how long have they been friends? I would ask, how often do you visit them? So that has nothing to do with any document that you may have to study…

… Then I would ask you about your responsibilities under the Executive Ethics Act‚ which is conflict of interest and things like that. So as you can see here it is not us accusing … It is us‚ because it is an inquisitorial‚ trying to find out: what do you know?

– Gently at first: Madonsela to President Jacob Zuma, attempting to ascertain his relationship with the Gupta family from his side, Oct 2016

[W]e want honest answers that are coming from your heart, not prepared answers.

Those answers cannot change with legal advice, they can’t.

This is not a criminal justice process where you have the right to remain silent.

I am concerned, though, that President, you are the President of the Republic of South Africa and you are employee number one. Normally when we are dealing with people who are responsible for the State, we deal with them and the lawyers they come in where necessary, because it is you who is accountable, Sir. It is you who are employed by the State as its most important employee and then you employ the rest.

If we are starting with, for example, why did you remove Minister Nene, why do you need somebody to legally advise you? Because that is a decision you took yourself without legal advice. You took that decision, exercising your power as an Executive. Yes. No, but it is a decision you have already taken, so you don’t need to be advised why you took it.

– Madonsela after being threatened during the Nkandla investigation

She didn’t actually say it, but it cracked us up

A word to the wise

Forgiveness does not mean you accept or ignore wrongdoing. It means tackling wrongdoing without hating the wrongdoer.

I need to listen well so that I hear what is not said.

As an African woman, I’ve learnt the importance of self-definition and living purposefully. It’s vital that every girl determines, as early as possible, who she is and what her contribution to humanity will be.

The best advice you will ever receive is from your own soul.

The job is about protecting the public from improper conduct [whatever] quarter it may come from. So stick to that job.