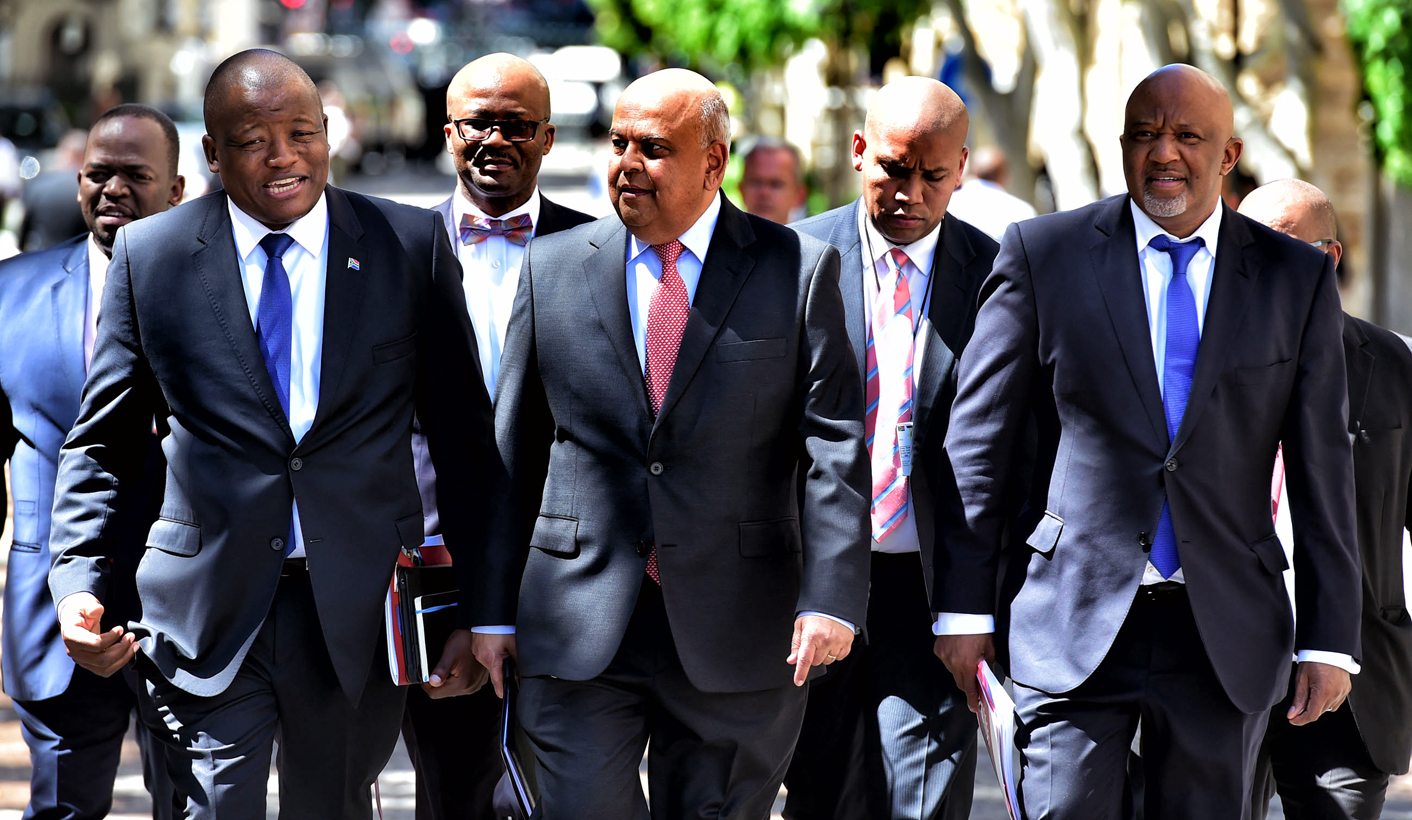 This was a year when a league of despicables who inhabit the state and the ANC could have triumphed. It was when a family who knows not the meaning of shame tried to annex our country by corrupting state institutions, parastatals and the security agencies, and by controlling their minions in Cabinet and their number one marionette: President Jacob Zuma. They tried to hijack our National Treasury. Finance Minister Pravin Gordhan, his deputy Mcebisi Jonas, Treasury director-general Lungisa Fuzile and the men and women in the finance department are no heroes. They are people who simply did their jobs under incredible pressure, fended off ratings downgrades and kept the machinery of our economy running when the easier option was to throw in the towel. By RANJENI MUNUSAMY.

Where would South Africa be now had Pravin Gordhan not, against his personal interests and sense of self-preservation, agreed to take up the post of finance minister again last December? Let’s never forget the circumstances under which the position had been offered to him. The economy was in serious trouble after his very capable and well respected Cabinet colleague Nhlanhla Nene had been fired for no reason other than that he would not allow the National Treasury to be used as a feeding trough.

Gordhan knew that he was accepting a poisoned chalice as the people who wanted Nene out of the job would come after him. He did so anyway.

Where did it get him? Gordhan became the enemy of a powerful lobby in the state and in his own party. A few days before he was to present the 2016 Budget, it emerged that he was under investigation in connection with the special investigating unit that operated at the South African Revenue Service. He was deeply upset then and has been under strain for most of the year as the Hawks and the National Prosecuting Authority (NPA) collaborated to also try to charge him on another matter. In November he was to appear in court but the decision to charge him was reviewed.

Throughout all this, Gordhan stood firm, stared down his enemies and did his job. There must have been moments when it all seemed too much to bear. When Gordhan spoke at Daily Maverick’s The Gathering in June, the world got a glimpse of how deeply hurt he was. There must have been the temptation to walk away. But doing so would have meant yielding to the coterie that wants him gone and would have sent the economy into free fall.

Gordhan showed respect for South Africans, responding publicly to the allegations against him and keeping people informed about developments in the cases. In a time when accountability and adherence to the Constitution is flouted from the highest office, Gordhan showed he had nothing to hide and explained his approach at every step.

Civil society, opposition parties, some people in the ANC and struggle veterans rallied around him. The Hawks and NPA did not succeed in their mission to drag Gordhan to court but what they did is force South African society into action to defend Gordhan, the Treasury and the Constitution.

Gordhan was not alone in bearing the pressure. Deputy Finance Minister Mcebisi Jonas was a marked man too. He had been offered Nene’s job and tempted with a bribe of R600 million. He could easily have become another government official on the Guptas’ payroll to help them fleece the state.

By turning down the bribe, Jonas became an enemy. There were people lined up to take his job and Gordhan’s. Jonas could have quit to escape the axe dangling over him. Instead, he too put his head down and kept working.

Jonas was then placed in a difficult position when reports emerged that he had been offered Nene’s job by the Guptas. Unlike others who had intimate knowledge of the nefarious activity in the state and kept silent, Jonas took the extraordinary step of confirming the allegations publicly. By doing so, he forced open the chamber of secrets and other people then came forward with more shocking revelations about the improper relationship between the Guptas and the president.

Jonas was made to be a liar, including by his own comrades. The ANC did not take the information he provided seriously and shut down an internal probe. Still, Jonas provided his evidence to the Office of the Public Protector, and through the State of Capture report, the gory details of the Gupta-Zuma nexus was revealed.

This was rough year for the South African economy, facing the threat of recession and credit ratings downgrades. With Gordhan facing the humiliation of appearing in the dock and the knives out for Jonas, the team at the National Treasury had to work in an atmosphere of constant uncertainty and fear that their political principals could be fired. The shock of Nene’s firing and the horror of interlopers marching in to commandeer the department are still fresh in their memories. Director-general Lungisa Fuzile kept a steady hand on the wheel and the team continued their programme of fiscal consolidation and trying to keep money flowing to where it should go. In the face of tremendous political pressure, they refused to blink on the nuclear programme.

Gordhan and his team worked with business and other government leaders on an economic recovery plan. They talked up the economy, lobbied the investor community and appeased the ratings agencies. Economic growth is not where it should be and the fiscus is under severe strain to meet the demands of our country, particularly for education. But South Africa narrowly dodged the bullet of being downgraded to junk status and efforts continue to stabilise the economy and promote growth.

With his hands already full, Gordhan, ever the astute strategist, delivered an unexpected gift to South Africa – again at political risk to himself. By seeking a declaratory order from the high court to prevent him having to intervene on behalf of the Guptas to get their bank accounts reopened, Gordhan opened an avenue for the country’s banks to reveal why the accounts were closed. He could have been punished for aggravating the president’s friends but took the gamble anyway.

The Gupta contagion is deep, complex, brazen and terrifying. With the family enjoying political cover at the highest level, it is difficult to get to the bottom of the rot and ensure prosecution for their audacious methods of hijacking the state. Thanks to Gordhan and Jonas, some of the activity has been cracked open.

Our country has complicated problems and 2017 is bound to be another economically challenging year. It will also be an action-packed gruelling year politically as the ANC prepares to elect a new leadership and Jacob Zuma’s grip on the nation loosens. In times like this, South Africa needs incorruptible and courageous people in positions of power and influence. We also need committed public servants who are able to do their jobs against all odds and keep our country from declining further.

We might not always agree with them – on spending, prioritisation of the Budget and taxation. But we can say this about the team heading the finance department: they stepped up and displayed the highest form of patriotism when South Africa needed them. For keeping us afloat in 2016 and for not backing down when other might have done so, we salute you.