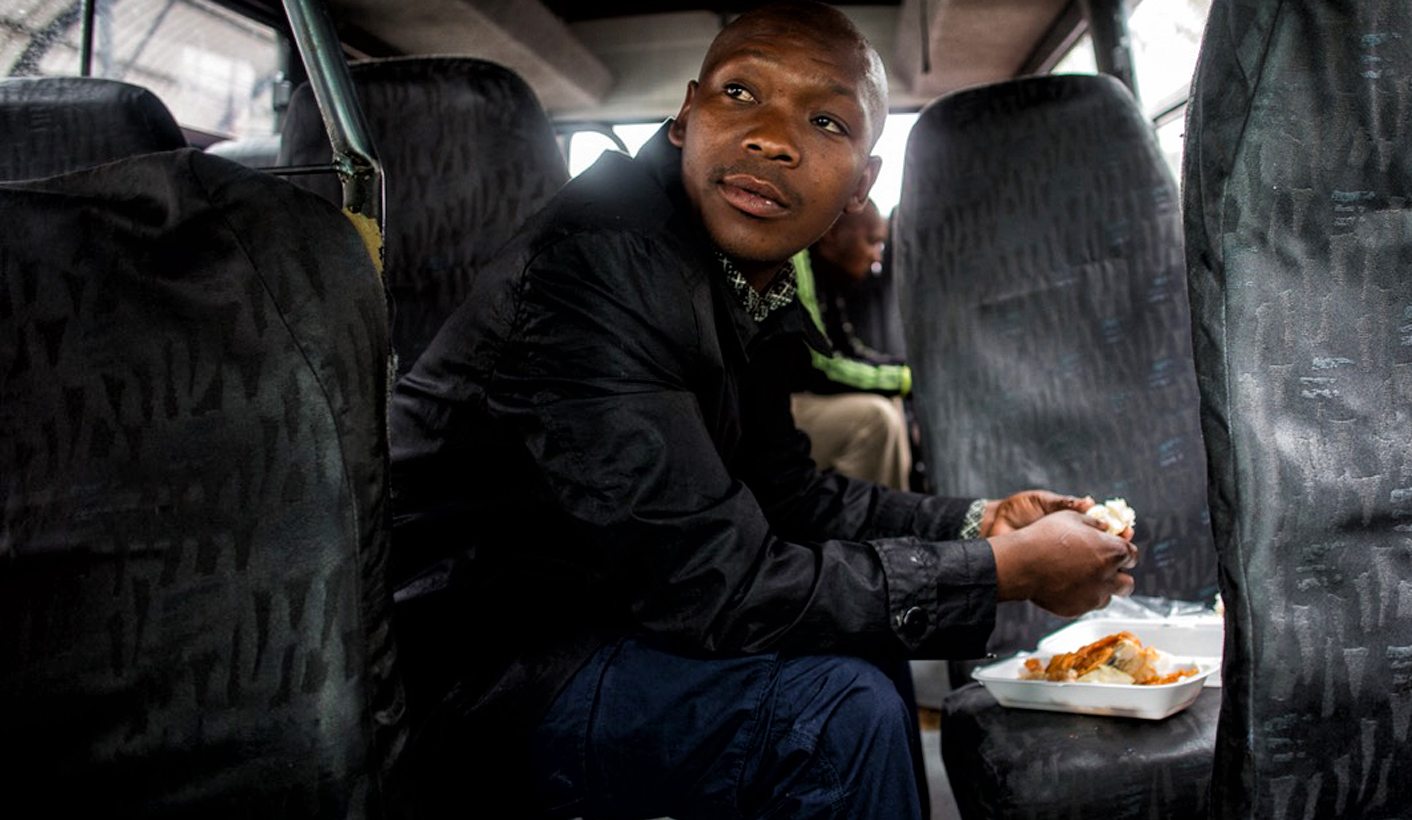 December means long hours for taxi drivers as they ferry passengers around the country. HEALTH-E’s Kimon de Greef finds that sugar and caffeine keep many drivers on the road.

Sandisele Kaltom, 28, rises by 05:30 each morning to begin work. He lives a block from the Langa taxi rank outside Cape Town, in a single room in a flat facing a row of rundown trading stalls. He eats Weet-Bix or oats for breakfast, and washes in a shared bathroom. By 06:00, before the onset of peak traffic, he is on the road.

The N2 highway clogs up fast as commuters pour into the city from the Cape Flats. Kaltom, like most minibus taxi drivers in South Africa, earns a commission on each passenger, and must race to his destination to load return trips as quickly as possible. He drives three routes: from Langa to Bellville, Mowbray, and Wynberg. These routes are clearly demarcated in his operating permit, right down to individual street names, to avoid conflict between rival taxi associations. (“Right onto N2, Settlers Way; left at Mowbray off-ramp; left into Main Road; left into Station Road to taxi rank … return along same route.”) Kaltom accelerates hard and overtakes on yellow lines and cuts into gaps to edge ahead of his colleagues, who are all engaged in the same contest.

This feeds into Kaltom’s principal source of tension: traffic cops, who seem to make a point of targeting taxi drivers. “They are stricter in Cape Town than anywhere else,” he says. (His father owns several taxis in the Eastern Cape.) “They write too much fines. They always put up road blocks, even on the highway. Every day you wake up and stress.”

A taxi driver can be fined for overloading or breaking the speed limit or disobeying road signs. These transgressions are motivated by economic self-interest (after buying petrol and paying 75% of his fares to his boss, Kaltom takes home between R900 and R1,200 a week) but are also tacitly encouraged by commuters, who need to get to work or school on time. “If I drive too slow the passengers are unhappy,” says Kaltom, who has been a taxi driver for six years. “Tomorrow, they travel with somebody else.”

He works seven days a week. On weekdays, he doesn’t pause once until after 09:00, when the morning crush begins to subside. He is loud, attention-seeking, a compulsive prankster — temperamentally suited to a hyperkinetic public transport sector that has resisted several attempts, over the last 25 years, to bring it under tighter state control.

Minibus taxis move more than 15-million South Africans daily, operating by the same informal market logic that impels Kaltom to skirt the law. It is exhausting work, a protracted adrenaline rush. To keep going, Kaltom drinks energy drinks loaded with sugar and caffeine, though he worries that this may compromise his health.

I met him at the Mowbray rank on a quiet weekday morning. It was 10:30. He was reclining in a friend’s taxi, waiting for his turn to load passengers. Whenever drivers arrive at the rank, they write their names on a scrap of card strung to a City of Cape Town rules noticeboard (“No mechanical work, No firearms, No tauting” — the final word conceivably a misspelling of “taunting” or “touting”). Kaltom estimated he had another 90 minutes until the list reached his name. He was buzzing from a 500ml can of Monster Energy, equal to consuming four espresso shots and more than 13 teaspoons of sugar. He said he was likely to drink a second can that afternoon.

“It’s like Grandpa [headache powder],” he told me, crunching the can with his thumbs. “You can’t use it every day. But I’m young and healthy; I can still drink this.” Unlike many of the older drivers, who had diabetes, he added. “They buy Tab, Coke Zero, things like that.”

With rising sugar consumption in South Africa fuelling chronic diabetes, obesity, and tooth decay, the government has committed to implementing taxes on sugary soft drinks. For now, energy drinks, like regular sodas, are cheap. Four shops sell energy drinks at the Mowbray rank. Certain brands — Dragon, Score, Elite (which Kaltom pronounces “e-light”) — cost just R10 a can. Kaltom does not trust these products and pays extra for Monster, which, like smaller cans of Red Bull, retails for R20. “The cheap stuff is bad for you. You don’t know what they put in,” he says.

Energy drink consumption in South Africa increased by 25% between 2014 and 2015, according to market research firm BMi. This was the lowest growth rate in the last five years. Retailers now sell more than 153-million litres of energy drinks per year. The rise of inexpensive local brands, like Dragon and Score, has helped inflate this figure.

Kaltom is not alone in his concerns about quality. Last September, Zimbabwe’s Health Ministry banned Dragon for “violating import procedures” and failing to identify artificial flavourings on its packaging.

“Zimbabwe is not a dumping ground for these cheap energy drinks [from South Africa],” said Health Minister David Parirenyatwa. “We should not allow them to send their [unhealthy] products here.” But the Zimbabwean government lifted its ban after two months.

“I must remember to drink water,” said Kaltom after tossing his can and flirting with a female security guard for a few minutes. “If I don’t, my kidneys hurt. It’s because I sit in the taxi for so long.” Kidney pain is both a symptom of dehydration (caffeine is a powerful diuretic) and, according to research published in the American Journal of Kidney Diseases, a possible consequence of sedentary behaviour. Though he is proud of his health, Kaltom and thousands of taxi drivers like him are at risk of several lifestyle diseases.

I accompanied him on a trip to Langa a few days later. He drove mildly, unhurried in the easy hours before noon. The girls in the back laughed at his jokes. After unloading, Kaltom passed his apartment and turned onto a narrower street, where corrugated shelters pressed to the curb. Stopping outside one, he unfolded a R20 note and handed it to a woman at the entrance. “That’s my younger sister,” he said. “She has TB. I don’t need to get rich; if I can afford food and clothes, and support my family, that’s fine.”

Kaltom buys samp and beans for lunch, or grilled meat from the township vendors, or rice. He avoids fried foods, he says, so that he doesn’t put on weight. “Some drivers have only been doing this for two years but are fat already,” he boasted, patting his trim waist. (When I found him eating fried fish later, and quizzed him about it, he protested: “I didn’t get any chips!”)

A different sister — he has five, and three brothers — cooks for him at night. He returns home after 20:00, much later when he gets hired for private trips after hours. He squeezes through peak traffic a second time, racing drivers in the opposite direction and watching for cops, as the city empties.”

“It makes me feel good. It wakes me up,” he said one morning recently, crushing another Monster can. “I felt tired earlier. Now I’m ready.” DM

All photos by Shaun Swingler.