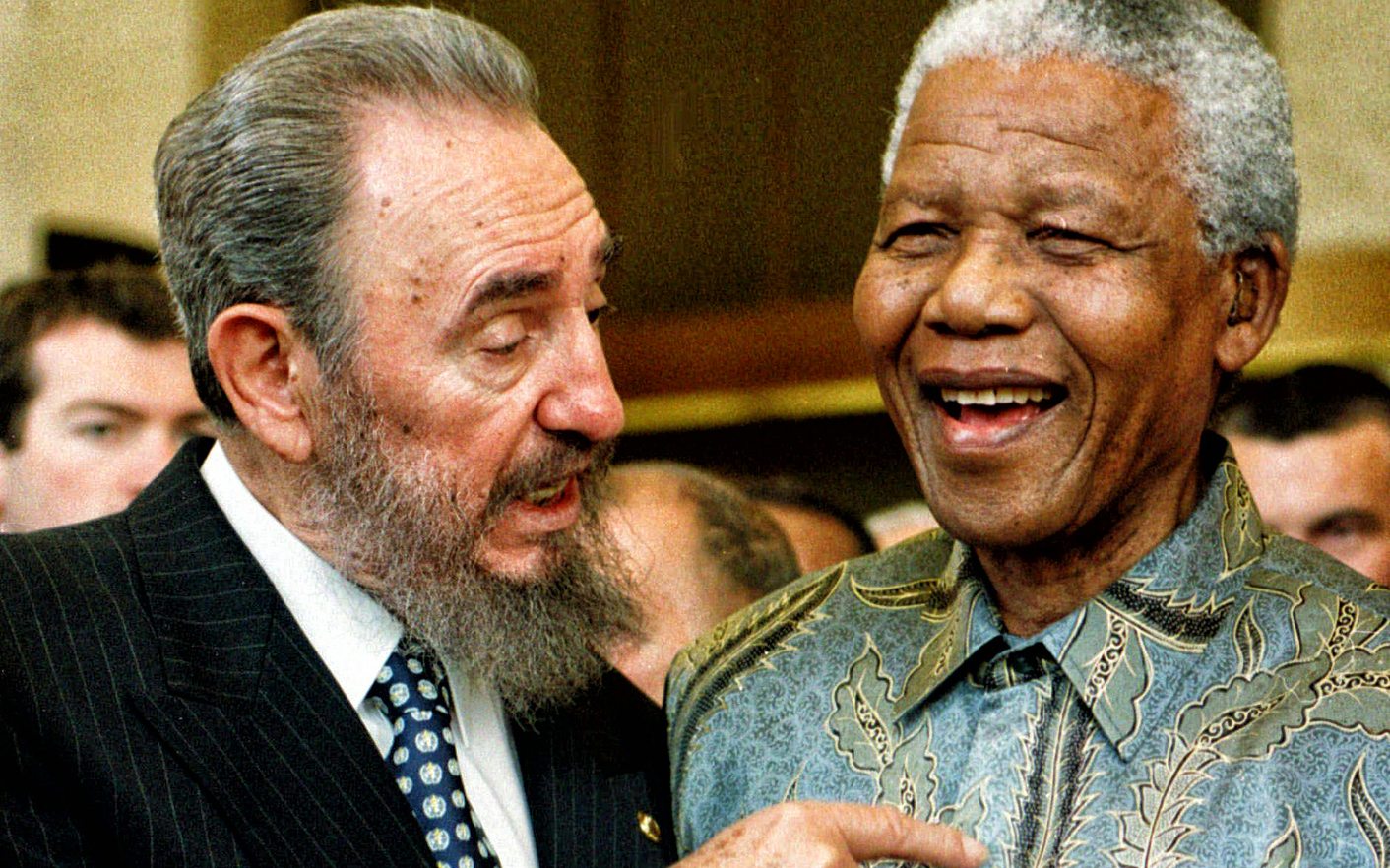 The death of long-time Cuban ruler Fidel Castro last month led to tributes for the larger-than-life revolutionary leader from across Africa. From the African Union headquarters in Addis Ababa to Harare and Pretoria, leaders praised Castro’s contribution to anti-colonial struggles on the continent.

Malema convened a rally for supporters in Soweto on December 1 to honour Castro, and said South Africa should emulate Cuba’s example to raise the standard of living of all its citizens. “We are proud of Fidel, we want to be like Fidel,” said Malema. He travelled to Cuba for the funeral of Castro on Sunday December 4.

Malema is no newcomer to this anti-imperialist rhetoric. The red berets worn by EFF members are a direct reference to Che Guevara, who led the Cuban revolution alongside Castro. At the memorial service in Soweto, Malema hit out at President Jacob Zuma and the African National Congress (ANC) for not doing enough to uplift the poor through radical economic redistribution. “Who is Zuma to say that Fidel must rest in peace? He has no right because he has turned on the liberation,” he asked.

Yet it was President Jacob Zuma who was asked to make a speech at a memorial rally on November 29 in Havana’s Revolution Square. Zuma called Castro “one of the greatest revolutionaries of our time and one of the greatest heroes of the 20th century”. He said: “The deep and undying special relationship between Cuba and Africa was cemented by the blood of heroic Cuban soldiers who paid the supreme sacrifice for their belief in anti-imperialism, freedom and justice.”

Zuma was referring to the role of Cuban soldiers in holding off the South African Defence Force at Cuito Cuanavale in Angola in 1988 – a key battle in the war in Angola that would ultimately lead to the retreat of South African soldiers from Angola. This paved the way for Namibia’s independence in 1990.

Zuma ordered flags to hang half-mast until December 4, and books of condolences could be signed in various government buildings in South Africa.

Many African commentators recalled Cuba’s assistance to liberation movements across the continent during the Cold War era: its training of troops, its help to the Algerian National Liberation Front and its role in Ethiopia’s war against Somalia, the so-called Ogaden War, in 1977.

In her tribute to Castro, the AU Commission Chairwoman Nkosazana Dlamini-Zuma said, “Fidel Castro set an example, investing in his people, particularly in healthcare and education, but also in broader social policy, regardless of race, gender or social status. This was reflected in Cuban foreign policy, and the solidarity over the years with many African countries.” Dlamini-Zuma was referring to Cuba’s assistance to Africa after the end of the colonial period.

This was most prominent in the area of healthcare. Cuba sent thousands of doctors and medical professionals to work in various African countries, she said. When the Ebola epidemic broke out in 2014, Cuba also sent a large contingent of health workers to Liberia and Sierra Leone.

In the US, Europe and elsewhere, the passing away of Castro focused on the Cuban leader’s contested legacy, with many pointing out the human rights abuses during his decades-long reign. In Africa, however, voices of dissent and criticism have been drowned out by much louder praise for Castro’s African legacy.

Castro’s death – at the age of 90 – has, however, once again brought to the fore the strong and often complicated relationship between Africa and its diaspora. Many people of African descent are living in Cuba and elsewhere in the Caribbean – a fact that in part also explains Castro’s engagement with the continent.

The African diaspora as defined by the AU includes “historical” members, who have links with Africa through the Atlantic slave trade in the Caribbean, the US and Brazil, as well as those belonging to the intellectual and cultural diaspora. The latter encompasses those academics, scientists and artists of African descent around the world. There are also “economic actors”; Africans who moved out of Africa more recently, and who feel compelled to contribute to the well-being of the continent.

On a symbolic level, African leaders and officials acknowledge the important role of countries like Cuba and those in the West Indies for their help in liberation struggles. In May 2013, for example, leaders from the West Indies were invited to address opening sessions of the AU.

At these 2013 celebrations of 50 years since the founding of the Organization for African Unity, a conference on Pan-Africanism and the African Renaissance also reflected on the role of the diaspora to African unity and independence through contributions from Haiti, Barbados and Brazil.

The AU also declared in 2003 that the African diaspora would become the sixth region of the AU (together with the Northern, Eastern, Southern, Central and Western Regions).

This sixth region, however, does not have any voting rights in the AU decision-making process, and doesn’t participate in bi-annual AU summits. Plans made at the Global African Diaspora Summit, organised by the AU in Johannesburg in 2012, have also not seen any significant follow-through.

Some diaspora intellectuals blame the post-colonial leadership of selling out to Western interests, in exchange for aid from Europe and the US. They’d much prefer Malema’s style of politics, which blames colonialism and slavery for the dire situation that many Africans find themselves in, distancing themselves from the official views of their governments.

At a conference in Johannesburg on November 28, just a few days after Castro’s death, Sir Hilary Beckles – Vice-Chancellor of the University of the West Indies, which comprises campuses across the Caribbean, including Barbados, Jamaica and Trinidad and Tobago – said it was the strong links between Africa and its diaspora that motivated the assistance by Caribbean nations to Africa. He said Cuba’s support to the liberation movements in Southern Africa was a collective effort shared by other Caribbean countries like Haiti and Barbados.

Beckles said Caribbean nations felt betrayed by the African leadership. A turning point came in 2001 when African states refused to join their call for reparations during the United Nations (UN) World Conference Against Racism in Durban.

“The European Union and the West didn’t want reparations for historical injustice to be put on the agenda, which led to a major confrontation,” he said. In the end, African countries sided with the Western nations because of “bread-and-butter politics”. Beckles said the wound that had opened up then has still not healed.

Beckles stressed that the quarrel is mostly with the African leaders and the establishment. Malema is a hero among the more radical youth in the Caribbean, he said.

Participants at the conference concurred that new movements like #Blacklivesmatter in the US and elsewhere give the relationship between Africa and its diaspora a new meaning. The concept of “decolonising knowledge” – which was the theme of the Johannesburg conference – was also taken up as a slogan by the #Feesmustfall movement among South African students this year.

Kenyan activist Brenda Wambui said, “Africanisation is an exercise in memory, giving us a larger sense of ourselves”.

Castro’s death and the tributes to him show that deep-seated ties between Africa and the Caribbean nations are still relevant today. Africa and its diaspora are forging new links, albeit not in official meetings and UN summits.

These links and the “exercise in memory” are also a being used as an effective tool by politicians such as Malema. DM

Photo: A file picture dated 19 May 1998 shows Nelson Mandela with Fidel Castro at a ceremony marking the 50th anniversary of the GATT Agreement, during the ministerial conference of the World Trade Organisation (WTO) in Geneva, Switzerland. EPA/PATRICK AVIOLAT