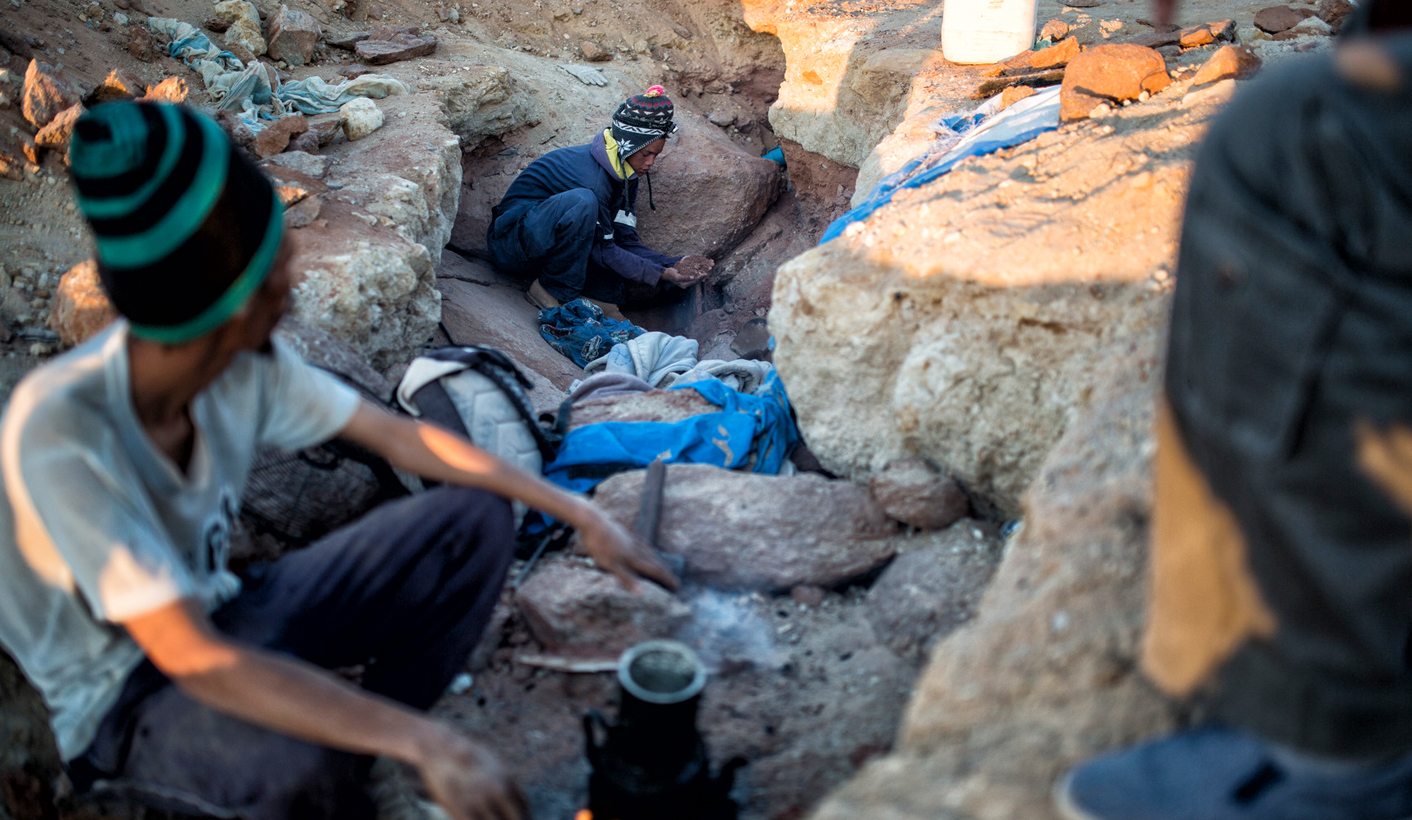 Will the Department of Mineral Resources use the opportunity to regulate small miners? By Safura Abdool Karim for GROUNDUP.

In September 2016, Ekapa Minerals filed an application in the Kimberley High Court to prevent people from “illegal” mining in Kimberley.

When a company has finished mining an area, there are leftover minerals called tailings or, as they’re commonly known, dumps. Due to inefficiencies in the mining process and improved techniques, these dumps often contain valuable minerals.

In Kimberley, which has been mined since the 1870s, massive dumps lie around and outside of the town. De Beers has been mining these dumps for decades. As they close the dumps, they sell or lease the land.

Some years ago, impoverished Kimberley residents discovered that even after the dumps are removed a small layer of kimberlite remains that can contain diamonds. Over the years, this layer of kimberlite has come to be known as the “floors”. Today, more than a thousand people mine these floors.

Last year, De Beers began the process of selling its interests in a number of their dumps in Kimberley to Ekapa.

In their application, Ekapa argued that the “illegal” miners were infringing on their ownership and rights of possession on the dumps. The application names a number of people but also refers to a class of “unidentified illegal miners”. It asks the court to prevent them from entering land owned or controlled by Ekapa as well as excavating, disturbing, processing and/or removing materials which form part of the dumps.

The people Ekapa wishes to interdict are artisanal miners. Their opposition to the interdict is based on a number of deficiencies in Ekapa’s application including its vagueness, that the requirements for an interdict have not been met, and that Ekapa has not complied with the law in certain respects. The miners also highlight the potentially devastating consequences of the order for their livelihoods.

This case highlights the long-standing tensions between mining companies and historically disadvantaged artisanal and small-scale miners. While there have been attempts to integrate artisanal miners into the mining industry, these efforts have been ineffective. Many artisanal miners find themselves in conflict with the existing mining regulations. The artisanal miners are arguing that the barriers preventing them from entering the industry infringe their constitutional right to “choose their trade, occupation or profession freely”.

Both the municipality and the Department of Mineral Resources have committed to regulating and supporting artisanal mining, but to date the artisanal miners say that no concrete support has been offered. Though the floors are not formally regulated, the miners have developed customs to govern their mining activities that resemble the claim system of Kimberley’s first diamond rush. Once someone begins mining, their exclusive rights to that patch are recognised by the other artisanal miners.

While De Beers sometimes tried to prevent the miners from mining on their properties, the artisanal miners report that they have generally been left to mine the floors without interruption. In fact, artisanal mining had been taking place in an area called Camp Three without objection until Ekapa began to stop the miners. According to the court papers, the interruption affected more than 260 miners.

The miners claim that Ekapa agreed to let them mine the floors in peace in April 2016. Ekapa denies this. In June 2016, Ekapa informed the miners that they were no longer allowed to mine on the floor of Camp Three because they had been mining the dumps. However, at the time, there were no minerals left in the dumps making it impossible for the miners to have mined them. Ekapa then destroyed the miners’ equipment and served an interim court order on the miners. Ekapa failed to disclose these meetings and the previous agreement with the miners when they applied for this interim order.

Many of the miners live on or near the kimberlite floors at Camp Three. So they are worried that the order Ekapa initially sought would have the effect of evicting them from their homes without due process. Ekapa has since narrowed the scope of its application to address this concern. Also, the artisanal miners allege that Ekapa interdicted the miners so that they could mine the floor themselves. While Ekapa has relied on the fact that the miners were mining unlawfully, it might not yet have legal rights to mine the land either (Ekapa claims it does not need any regulatory approval to mine).

It is not clear that Ekapa has met the legal requirements to obtain an interdict. Interdicts can only be granted in very specific circumstances and if you apply for one, the burden is on you to show that there is no alternative remedy to address the harm. Also, having the interdict apply to a vague and large class of people termed “unidentified illegal miners” will make it difficult for the interdict to be enforced.

The case shows the problems with the Mineral and Petroleum Resources Development Act, which makes it almost impossible for artisanal miners to mine legally.

In 2015, the South African Human Rights Commission investigated the regulatory framework of artisanal miners and found it wanting. The miners’ court papers also describe many attempts by miners to engage with government to regulate their activities, and the failure of government to respond adequately.

This case has created an opportunity for the Department of Mineral Resources to intervene and create a regulatory environment that includes and encourages small-scale miners. DM