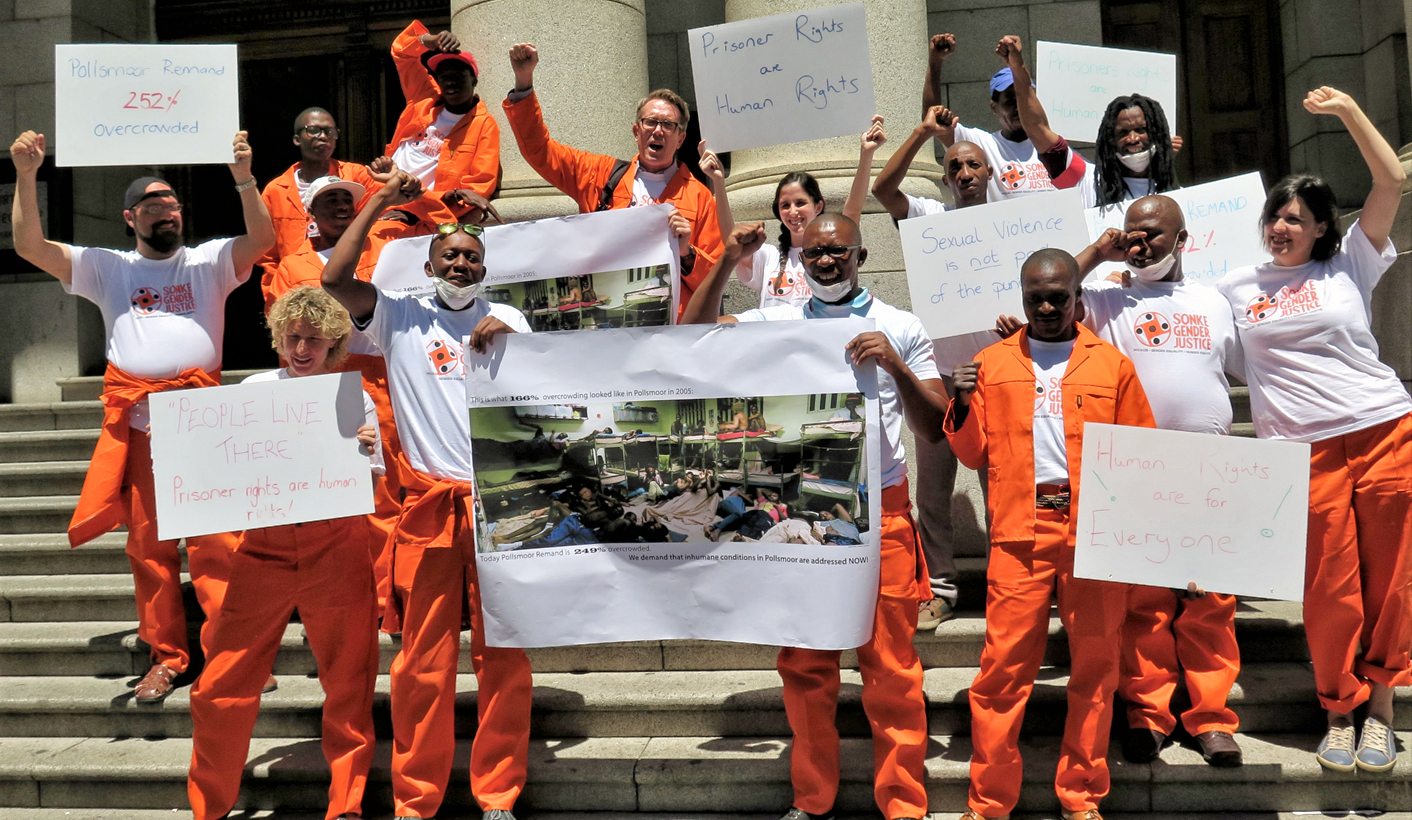 Awaiting-trial prisoners have won a big court victory. Rampant overcrowding and “horrendous” conditions at the remand centre for awaiting trial detainees at Pollsmoor have to be addressed following an order of the Western Cape High Court on Monday. By Ashleigh Furlong for GROUNDUP.

Conditions for awaiting-trial prisoners at Pollsmoor must be addressed in terms of a court order of the Western Cape High Court on Monday. The government has “failed to provide the inmates of Pollsmoor RDF [remand detention facility] with exercise, nutrition, accommodation, ablution facilities and healthcare services of a standard that complies with the requirements of the Correctional Services Act 111 of 1998, and that such failure is inconsistent with the Constitution”, states the court order.

The application was brought by Sonke Gender Justice, represented by Lawyers for Human Rights. The respondents were the government and the head of the remand facility.

Judge Vincent Saldanha has given the government two weeks to show why it cannot immediately reduce the number of detainees at the facility to not more than 120% of the approved number.

The government also has to develop a comprehensive plan with time frames that show how it will address and put an end to the deficiencies at the facility and this is to be submitted to the court by the end of January.

In addition, it has to file a report explaining what has been done to end the unlawful conditions.

At the same time, the head of the remand facility, Cecil Jacobs, must submit all the cell inspection reports from 2012 to date.

Both respondents must also pay the costs of the application.

However, Advocate Geoff Budlender from Lawyers for Human Rights, representing Sonke Gender Justice, described how “a lot of meetings” take place at the prison but that there is no evidence that the unlawfulness of the conditions has decreased, let alone come to an end.

During the application Judge Saldanha delivered a scathing rebuke of the Pollsmoor Remand Facility and the manner in which they approached the case.

“How do human beings live in a detention facility while there are rats?” Saldanha asked advocate Joey Moses, representing the head of the remand facility. Last year, thousands of detainees had to be evacuated from the prison as there was a rat infestation leading to two deaths.

Saldanha asked if the department could guarantee that another rat infestation would not break out tomorrow, resulting in another death – a guarantee that Moses said he was unable to give.

“The most important issue is that there is simply not enough space at Pollsmoor,” said Saldanha. He said that either detainees needed to be moved to other facilities or another prison needed to be built. The possibility of moving detainees to police stations was also raised.

Describing the application as “one of the most serious injunctions made against the Minister [of Correctional Services] since 1994”, Saldanha said that problems surrounding the conditions at Pollsmoor possibly goes back to before 2003.

He said that in the past other areas that were considered “much more deserving” were prioritised, resulting in the current state of the prison. He also questioned whether the side-lining of the improvement of conditions was due to the fact that detainees were suspected of committing crimes and therefore not seen as a priority.

This attitude was mirrored in court papers describing the head of the remand facility’s response to eyewitness accounts, where he pointed to the fact that some of the witnesses were “self-confessed members of gangs” and charged with serious offences.

Saldanha asked Moses what this had to do with the allegations. In response, Moses spoke of the complaints register that described complaints made by detainees.

“You keep repeating ‘register, register, register’. It doesn’t detract from the failure on the part of the deponent. What witnesses have to say – you fob them off and say to the court, ‘Don’t believe them, they are awaiting trial gang members with serious offences’,” responded Saldanha. “And it gets worse.”

He said that Jacobs then asked for the judges’ reports on the conditions in the prison to be ruled “inadmissible hearsay”.

“Are you serious about a technical point of view when someone dies because of rats in an infested prison?” asked Saldanha.

During the proceedings, Budlender told the court that it was “painful to learn of the circumstances in which people are expected to live”.

Reading out sections from Justice Edwin Cameron’s report on his visit to the prison, Budlender spoke of the “horrendous” and “appalling” conditions that detainees experience – from filthy cells to sores and wounds to blocked drains and no hot water.

A seemingly ill-prepared Moses stumbled over his responses to Saldanha’s persistent questions, even completely abandoning a number of points that he had originally wanted to raise, including a six-month postponement.

Saldanha reproached Moses for his client stating in court papers that they are deposing on behalf of the government, when he did not have the authority to do so.

Saldanha told Moses that all his client was asked to do was to provide inspection reports of the facility and that all he had to do was explain why he would or would not hand these reports over to the court.

When Moses said that the head of the facility “was not averse” to providing the court with these documents, an irritated Saldanha asked why then they hadn’t been handed over.

“How seriously does Mr Jacobs take these proceedings?” asked Saldanha.

“He [Jacobs] is not ultimately responsible – the government is responsible. Why does he assume a great burden on himself if he doesn’t have power to do so?” asked Saldanha.

“He [Jacobs] didn’t think it was important to be present today to listen to the debate… he sends other people to listen on his behalf,” said Saldanha, calling this “unacceptable”.

In court papers Jacobs said that he had no knowledge of the statistics pertaining to overcrowding, statistics that are updated once a week and sent via e-mail.

Saldanha said it “borders on the bizarre” that the head of the remand facility either didn’t check his e-mails or wasn’t included in an e-mail that details the number of detainees in the facility.

People ‘sleeping in the showers’

Outside the court, activists from Sonke Gender Justice stood dressed in orange outfits reminiscent of prison garb, holding posters depicting the conditions in the prison.

Mzamo Sidela, a trainer from Sonke Gender Justice, described the court action as “a last resort”. He said that it was “long overdue” for a judge to give a mandate on this issue.

Former inmate Thandisizwe Mashwau told GroundUp that when he was in Pollsmoor there were more than 40 inmates in one cell. “People are sleeping in the showers,” said Mashwau. DM