Boxed in: Can Zuma do the Shuffle? 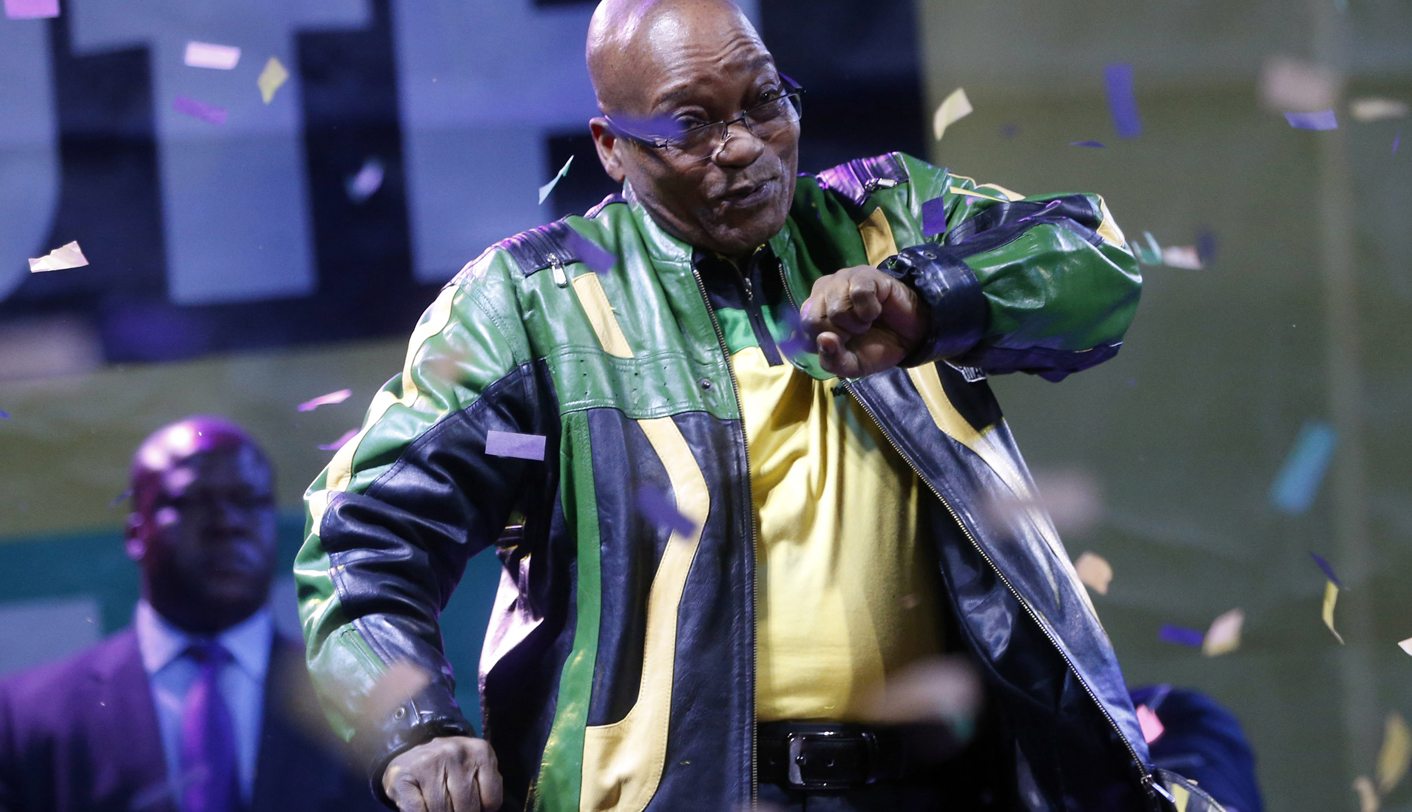 Thanks to the reprieve from credit rating agency S&P Global Ratings, this week will not resemble last year’s economic and political turmoil as a result of President Jacob Zuma’s reckless decision to remove Nhlanhla Nene as finance minister. Still, South Africa is not out of the woods. A Cabinet reshuffle has been anticipated for several months, with fears that Zuma will give in to pressure to chop Pravin Gordhan. After the revolt from within the ANC national executive committee (NEC), there has been further speculation that Zuma might wield the axe. But Zuma is wounded and needs to retreat to consider his next moves. By RANJENI MUNUSAMY.

Let’s never forget the fact that President Jacob Zuma shows no remorse about his ill-fated decision to appoint Des van Rooyen into the finance portfolio, wiping off billions of rands from South Africa’s economy. In fact, he is pretty bitter about the fact that he was muscled into removing Van Rooyen four days later and appointing Pravin Gordhan. He believes the economic deluge over that period was just fluctuations of the markets and that Van Rooyen as a “well-trained cadre of the ANC” was “the best candidate to take over the control of the economy”.

Addressing the Gauteng ANC in May, Zuma was clearly resentful that his hand was forced. “I was castigated worldwide, including by senior members of the organisation. I then realised I had touched the wrong nerve. I was told I never consulted before making the appointment.”

Had the National Prosecuting Authority (NPA) been able to make the flimsy fraud charges against Gordhan stick, perhaps Zuma would have got his own back and fired the finance minister to make way for someone he actually wants in that job.

As it turned out, the National Director of Public Prosecutions Shaun Abrahams revoked the decision to charge Gordhan and former South African Revenue Service (SARS) officials Ivan Pillay and Oupa Magashula. The Hawks are meanwhile still trying to piece together a prosecutable case against Gordhan in connection with the special investigating unit at SARS. After the fallout between Hawks boss Mthandazo Ntlemeza and Abrahams, it might be even harder to prop up that case.

Zuma’s resentment towards Gordhan would have escalated now because of the public campaign in support of the finance minister and the credit given to him and the team at the National Treasury for staving off downgrades from the three international ratings agencies. While the presidency statement on Saturday congratulated “Team South Africa” for “ensuring that the country’s sovereign debt credit rating status is not downgraded to junk status”, there was no acknowledgement of the high wire act Gordhan and his team had to perform to prevent the junk rating.

S&P has warned that the reprieve could only be temporary and they might reconsider if South Africa entered a recession next year:

“We could also lower the ratings if we believed that institutions had become weaker due to political interference affecting the government’s policy framework.”

This could place restraints on Zuma’s prerogative to restructure his Cabinet, which has been anticipated for some time. Because Zuma has been dismissive of the economic impact of his big move last December, he might ordinarily not have bothered too much with what the ratings agency said. But he has had to give undertakings to the investor community about reducing political risk and has been made aware that, with the spotlight on South Africa, any further changes to the finance ministry would be catastrophic.

The problem, however, is that the motive for axing Nene last year is still applicable to Gordhan now.

The team at the Treasury will not budge on loosening the purse strings and certainly will not entertain Zuma’s friends, the Guptas, running their department remotely. On the main issue that cost Nene his job, the nuclear build programme, Gordhan is even more unyielding, making it clear that the project is unaffordable.

While Eskom’s acting chief executive officer Matshela Koko said the nuclear programme would be implemented by 2025, Gordhan said a cost-benefit analysis had not been completed. In a written reply to a parliamentary question, Gordhan said “a detailed assessment of the feasibility and the affordability of the nuclear new build programme cannot be undertaken at this stage”.

Whoever has vested interests in the nuclear deal rolling out will therefore be extremely frustrated that despite attempts by Eskom and the Department of Energy to breathe life into it, the Treasury remains firm that there are no funds for the project.

Those who are determined to have Gordhan removed by whatever means possible believe that the political head of the Treasury can instruct officials to release funds, even if the deal is not affordable. These are people who have no idea how budgetary processes work or the implications of such fiscally unsound moves.

Zuma’s hands are tied for another reason too. Until last weekend, he was of the belief that the ANC would close ranks around him no matter what he did. That all changed when he was ambushed at the NEC meeting by a call for him to step down. While Zuma and his allies might in the past been bullish that the numbers in the NEC were on their side, they could not risk putting the matter to a vote – especially by secret ballot.

Zuma’s defenders have called for ministers who proposed and supported his recall to step down themselves or be fired. Zuma apparently said at the NEC that those who supported the motion would not be punished. ANC secretary general Gwede Mantashe also said a media briefing last week that there would be no acts of revenge against those who argued for Zuma to leave office. Those members of Cabinet who spoke out against Zuma are not bowing to pressure from his allies and have left it to the president to fire them if he wants.

But if Zuma had to make any risky manoeuvres now, there is no telling what might happen at the next NEC sitting. While he can fire members of the Cabinet, he cannot unseat NEC members who are elected at ANC conferences. The NEC will meet again early in January ahead of the party’s 105th anniversary celebrations in Gauteng. While Zuma can hire and fire ministers, he cannot remove them as Members of Parliament. He simply cannot afford to agitate the ANC caucus in Parliament or he could provoke members of his own party into voting against him in a motion of no confidence.

Zuma is also facing pressure from ANC veterans who have requested a consultative conference to discuss the crisis in the organisation. A delegation of veterans will meet ANC officials at the ANC headquarters, Albert Luthuli House, on Monday to discuss the outcomes of the NEC meeting.

If that is not enough, Zuma met with the ANC’s integrity commission at Lilliesleaf Farm in Rivonia on Saturday. While the meeting is being played down as a discussion on the state of the ANC, it is evident that the commission wants answers from Zuma about his conduct, particularly in relation to the allegations around “state capture”.

With so much heat on Zuma, he has to tread carefully. His defensiveness was evident at a thanksgiving service he attended in Durban on Sunday. Zuma told thousands of members of the Twelve Apostles Church that religious leaders should stop meddling in politics.

“It is sad to see the church and church leaders getting mired into matters of politics instead of praying for leaders. I urge the church to pray for us as leaders‚ pray for our people to stop the hatred,” Zuma was quoted by Timeslive.

Several religious leaders have been vocal in condemning Zuma’s conduct and joined civil society initiatives calling for him to step down. Religious leaders also came out in support of Gordhan after it was announced that he would be charged.

Unlike a year ago when he had free reign, Zuma is now in a tight space. His juggling act with the finance ministry was unexpected then and had devastating consequences. With the economy in slow recovery and his every move scrutinised, Zuma cannot make any sudden moves. His political capital is waning and he is now quite aware of the axe is dangling over his head.

However, if Zuma does make changes to the Cabinet anytime soon, particularly to any of the key ministries, it will be a sure sign that someone has a gun to his head. It will be foolish and politically suicidal for him to make any risky moves, and would only do so if he were being coerced.

For now, Zuma’s best bet is to lie low. Lucky for him, the festive season will allow the pressure against him to dissipate somewhat – granted of course that those pulling his strings will grant him some recovery time. DM