The Gambia: Jammeh’s defeat shows voting does count, and dictators do fall 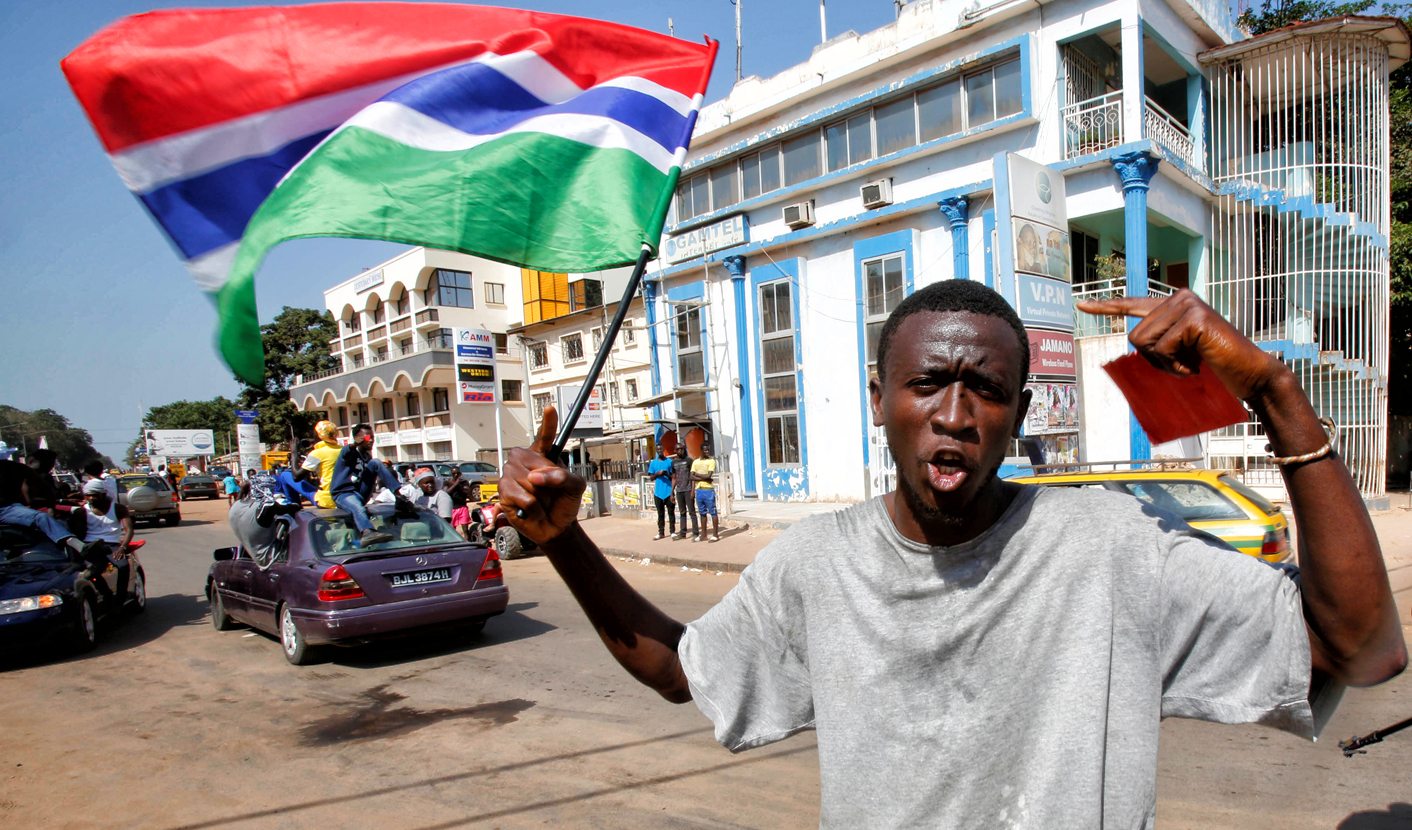 The shock defeat of Gambia’s would-be president-for-life Yahya Jammeh sent shock waves through the region, and caused wild celebrations in Banjul. But for one Gambian journalist-in-exile, the news has far more personal implications. By SIMON ALLISON.

Friday, December 2, was a very good day for Sanna Camara.

Camara, 35, is from the Gambia, Africa’s smallest country. He is not popular with his president, who takes a dim view of a free press, and regularly imprisons or intimidates journalists who try to do their jobs properly. Camara is one of those journalists – he runs the blog Gambia Beat – and in August 2014 was forced to flee the country. He had already been arrested three times.

Camara left behind his wife and three children in Banjul, the capital, and snuck across the border into Senegal, where he has been working ever since.

When I met with him, last week, he wasn’t sure when, or if, he would see his family again. President Yahya Jammeh has been in charge of the Gambia for 22 years, and showed no sign of loosening his grip on power – despite a resurgence in support for opposition parties, and an upcoming election that looked too close to call.

But Camara knew the script. Jammeh would fiddle the numbers. His security forces would threaten recalcitrant voters. He would cling to power, no matter what, because that is what dictators do – especially dictators who claim that they are ready to rule for “one billion years”.

On Thursday, Gambians went to the polls, casting their marbles – yes, marbles – for their preferred candidate. And then, on Friday, someone ripped up the script.

In extraordinary scenes, the head of the Gambia’s electoral commission read out the results of the vote:

“Having received 263,515 votes out of the total votes cast in the election, I hereby declare Adama Barrow newly elected to serve as president of the republic of the Gambia,” said Alieu Momarr Njie, looking a little nervous. He knew that the Gambia was suddenly in uncharted territory.

As campaigner Jeffrey Smith explained to Foreign Policy: “Jammeh faced such a surprising groundswell of support for the opposition that they couldn’t fudge the numbers to the point where they could make it credible that they won.”

After the shock results went public, Jammeh called president-elect Barrow to formally concede. “Allah is telling me that my time is up and I hand over graciously, with gratitude to the Gambian people and gratitude to the almighty Allah, to you,” Jammeh is reported to have said. He also told Barrow he would be around to advise if necessary, but intended for now to retire to his farm.

For Camara, the news was momentous. It wasn’t just about the future of his country, which suddenly looks so much brighter – and freer, and more transparent, and more democratic – than it did last week. It was also about his own future.

Camara can go home. His exile is nearly over. “I can’t wait to be with my family again, and continue my work from there, after being away for two years and four months,” Camara told me.

Presuming the handover goes smoothly, Barrow should be a very different proposition to his predecessor. A real estate tycoon, he ran on a platform of change, promising to revive Gambia’s stagnant economy and put a two-term limit on the presidency.

“I’m very happy because everybody thought that it was impossible, and the impossible became possible… A new Gambia is born. We want everybody on board now. This is Gambia, politics is over,” Barrow said in an interview with AP.

But not even Barrow really expected the impossible to happen. As the BBC reported, the president-elect “seemed bewildered” by the result. As was almost everyone else. This was an unprecedented defeat for a sitting dictator, and one that will send shock waves throughout the region.

Never mind that the Gambia is tiny, and almost completely powerless in the grand scheme of things. The message sent by the people of Gambia last week – that voting really counts, that the dictator can fall, that power can change hands peacefully – will resonate far beyond its borders.

“It is true that Gambia is a small country of only two million. But Yahya Jammeh was not a trivial figure. Due to his extreme eccentricities, he had drawn wide attention and become a symbol of the suffering a self-anointed president-for-life, with no clear economic plan, can inflict on his people… The club of dictators will be losing more than a bit of sleep in the next few months,” concluded Kenyan columnist Murithi Mutiga.

Camara, meanwhile, plots his return home. But he’s not booking the first flight to Banjul just yet. “I have some considerations prior to return, one of them being that the new government takes charge and is able to contain Jammeh,” he said. Hundreds of thousands of other Gambian exiles, refugees and economic migrants – many of whom have made the long, dangerous journey to Europe – will be making similar calculations, just as soon as they have stopped celebrating. DM