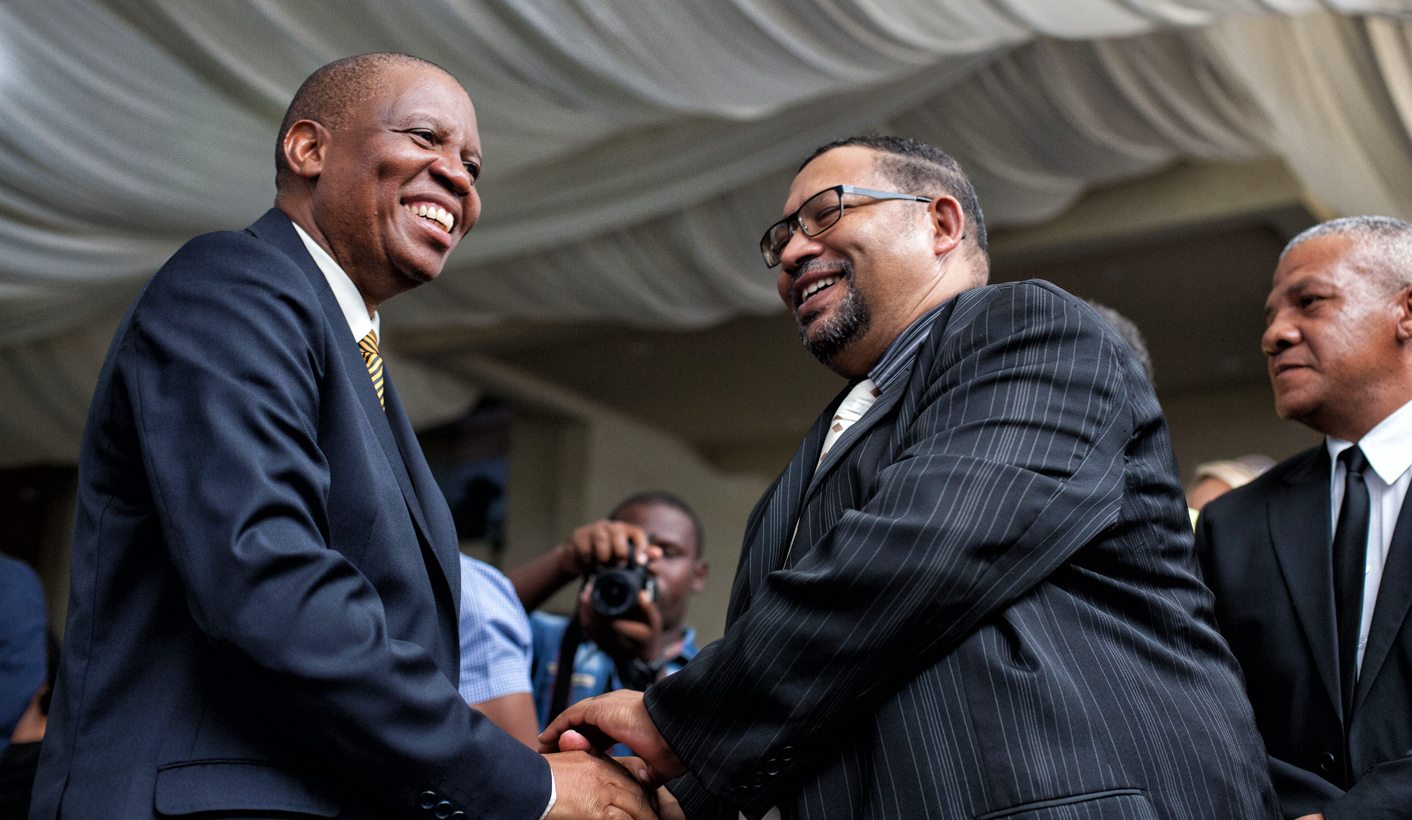 The honeymoon’s over. The ANC has gone and the opposition is in power. Johannesburg Executive Mayor Herman Mashaba on Thursday delivered a speech on his first 100 days in office and it’s the first serious indication of where the coalition government is going. Mashaba’s mayorship will force the DA and voters to reflect. By GREG NICOLSON.

When I met Herman Mashaba after he was announced as the DA’s mayoral candidate for Johannesburg in January he was confident he would become the city’s next mayor. He was friendly, engaging, self-assured and happy to respond to questions. He’s not charismatic, but his eagerness and openness make him endearing. His chances of succeeding Parks Tau seemed slim. He had the anti-ANC rhetoric on lock, but I winced at his stance on unfettered capitalism, black economic empowerment, and his inability to elaborate on policy issues. He wanted to hear from the voters, he said, before embarking on an ambitious campaign across the city.

The election gave Mashaba a crash course in politics and policy, but more than once the businessman couldn’t keep pace, supporting claims that he was just a known face representing a party lacking black leaders. His performance at Daily Maverick’s The Gathering was not encouraging. He claimed corruption was holding Johannesburg back, but when asked for examples he stuttered, dithered and let Parks Tau control the debate.

In August, the ANC beat the DA in Johannesburg, 46% to 43%, but neither party won a majority. Mashaba was elected mayor when the EFF decided, in its words, to choose the better of two evils, and allowed the DA coalition to form a government. Then there were the Pravin Gordhan charges, #FeesMustFall, and the State of Capture report, allowing Mashaba and new DA-led governments in Johannesburg, Tshwane and Nelson Mandela Bay to establish themselves with little scrutiny from the national media.

On Thursday in Fordsburg, Mashaba greeted journalists with his usual enthusiasm. But when he took the stage, it was clear Herman had become Mayor Mashaba. He read his over 7,500-word speech from a Teleprompter and both his personal vision and the DA’s policies, neither of which many people believed would have a chance to be implemented, became reality. His MMCs and staff sat in the audience; security stood side of stage; City of Joburg banners adorned the venue. He was… mayoral.

“For the first time in the democratic history of Johannesburg, there has been a transfer of power. And that power is back with our residents. Never again will the residents of this City be abused by their government. Now, for the first time, the power has been transferred from government to the people of the City,” he said.

He criticised the former ANC government, claiming it had wasted money boosting its own image while not benefiting the poor and supporting corruption at the expense of service delivery. “I ask you to picture the image of the Chauke family having to climb a tree to escape the flood water, having to witness their three-year-old daughter, Everite, fall into the water to be swept away,” he said, linking the tragic death of Everite Chauke to the past government’s performance.

“Corruption is not a strong enough term for what was taking place in the City. It was outright, shameless, looting,” said Mashaba. He outlined his 10-point plan for Johannesburg, which included the priorities of a coalition government, a pro-poor administration, reaching 5% growth in the city, professionalising the civil service, tackling corruption, identifying housing projects to be completed, finalising the housing list and delivering title deeds, extending clinic hours, and rejuvenating the inner city. Among his achievements after 100 days in power, Mashaba mentioned that the housing list, identifying those waiting for government housing, has been finalised and will be public, and efforts made to combat corruption.

In his first year, he said, he is limited as to what he can do after inheriting the ANC’s city budget and infrastructure development plan.

Then Mashaba spoke on inner-city housing. “We have over 115,000 people illegally occupying buildings in our inner city, most of whom are living in the most appalling conditions. Some so-called human rights lawyers have used the courts to keep these people under these conditions to the benefit of the slumlords,” he said. He then merged two issues, those facing evictions in Johannesburg and the list of people waiting for RDP housing. The Constitutional Court has determined that if someone is evicted from their home and will then be homeless, they must be provided alternative accommodation. “What does this say to the people who have patiently waited on our housing lists since 1996? Occupy these buildings illegally and you can jump the queue? How is that fair?”

Mashaba couched his language in terms of slumlords and illegal occupants. In a press conference after the speech he targeted foreigners. “Anyone who’s been in the city illegally must be prepared to face us. We are not going to tolerate illegality in our city… I’m actually declaring war against illegality in our city,” he said.

Suggesting foreigners were the problem, he said South Africa’s government had opened the borders for criminals and he would engage foreign embassies. Behind his inner-city rejuvenation plans he mentioned that the City should be opened to developers who can provide housing and jobs, without the red tape. It’s something the ANC tried to do but had to temper its plans because of both the Constitution and the reality that, legally, the city cannot be handed over to developers while current residents are arrested or shoved aside.

“I don’t think he said anything there,” said EFF Johannesburg caucus leader Musa Novela. “We know there’s nothing much they will bring different from what the ANC was bringing.”

While the DA coalition governs on the support of the EFF, Novela said that despite the party’s dim view of Mashaba, it would support the DA to keep the ANC out, while pushing for the budget to be allocated to poor areas. On Mashaba’s proposal to push evictions in Joburg’s CBD, he said the EFF recently raised a motion to deal with illegal evictions and it was supported by the ANC, but rejected by the DA.

Mashaba, however, is no longer a candidate. He’s mayor and his administration has the power to implement DA policies, which Johannesburg will for the first time experience. Stuart Wilson from the Socio-Economic Rights Institute, one of the “so-called human rights” groups the mayor was probably referring to on housing issues, on Thursday hammered Mashaba’s position on the most controversial issue he spoke on. “It’s not us, it’s the Constitutional Court. If he has a problem he needs to take it up with the Constitutional Court,” he said, regarding evictions and emergency accommodation. “We’re enforcing the law. We’re not creating it,” said Wilson. “If he has a problem with what the Constitution says then I can’t help him.”

Much of Mashaba’s speech on Thursday could have been lifted from the ANC Joburg government. The difference was the mayor was able to ride on the ANC’s failures and has the benefit of being new in government.

It was about change.

The rhetoric of change only lasts so long when you’re in power. As Mashaba admitted, people won’t trust him until he delivers on his promises, but Johannesburg is not Cape Town.

If the city implements the mayor’s plan to challenge the law by evicting people en mass, or target foreigners, it will immediately be linked to allegations that the DA is anti-poor and anti-black. Tau almost got away with similar efforts (remember Operation Clean Sweep?), but the DA doesn’t enjoy the ANC’s leeway. The party wasn’t elected outright, was beaten by the ANC, and faces ongoing accusations of being pro-capital, pro-white at the expense of poor, black South Africans.

The DA no longer has the benefit of being the best alternative and Mashaba’s leadership will further force the DA, and voters, to answer a crucial question: Are DA policies relevant in a country that has hitherto embraced radically different values? DM