World AIDS Day: SA must fill in the prevention and treatment gaps 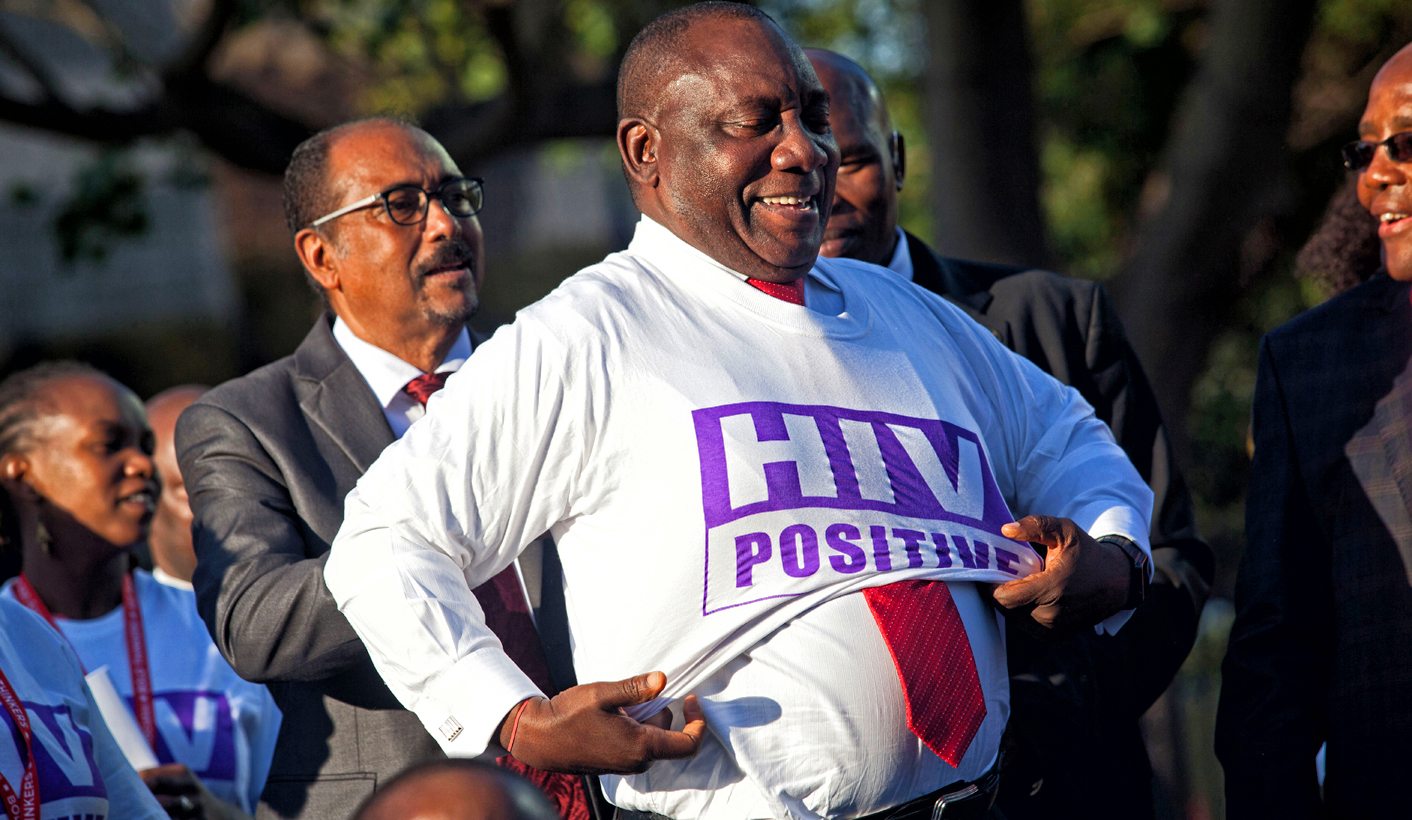 December 1 marks another World AIDS Day. Deputy President Cyril Ramaphosa will address the country’s commemorative event in Daveyton, Ekurhuleni. There are even hopes that South Africa will be at the forefront of creating a vaccine. But more needs to be done to address immediate challenges in the health system. By GREG NICOLSON.

South African National AIDS chairman Cyril Ramaphosa will today (Thursday December 1) take the podium at Sinaba Stadium in Daveyton. He’ll be joined by Health Minister Aaron Motsoaledi, Gauteng Premier David Makhura, and members of civil society. The deputy president will talk of the strides South Africa has made in reducing the impact of HIV/AIDS since it eventually rolled out antiretroviral treatment during the denialist days of former President Thabo Mbeki. He will urge South Africans to unite to confront the ongoing spread of HIV, and the related impact of tuberculosis, to stand up for those who carry the disproportionate burden – adolescent girls and young women.

Will he make tangible commitments to tackle the country’s biggest killer? Can Ramaphosa, often deployed as government’s problem solver, help the SA take the next step and build on the gains made since the roll-out of ARVs? Civil society groups have in the past boycotted the state’s official World AIDS Day event. They were frustrated at the pace and effectiveness of government efforts to tackle HIV and TB, angered by the cost such events incur while parts of the health system, and many patients, remain destitute. They were irked by the grandstanding such events encourage while serious engagement is neglected.

This year, health rights activist group Treatment Action Campaign (TAC) will march on the World AIDS Day commemoration following a night vigil in Daveyton. The deputy president on Wednesday offered a glimpse of where he will take his speech.

“We have risen to the challenge. We are acting in various ways – big and small – to spread information, fight stigma and promote healthy lifestyles. But the fight against HIV and TB is far from over,” Ramaphosa said, noting almost 3.5-million people are on ARVs.

“The rate of new HIV infections is still extremely high. Of particular concern are the high rates of new HIV infections among adolescent girls and young women. As we expand our treatment programme, we need to make prevention of HIV transmission a critical and immediate priority,” said Ramaphosa.

“We have no choice. We must act now to stop the spread of HIV and TB. We must preach and practice responsible sexual behaviour. This means using a condom during every sexual act. It means not having multiple sexual partners. It means getting tested regularly.”

For years, calls to combat HIV/AIDS have been linked to the language of urgency, but beyond pushing humanist imperatives and individual responsibilities, has the urgency focused on the right issues? Sure, South Africa has the largest ARV programme in the world, but does the system work? Can it improve?

“We must ensure that all South Africans have shelter, food, water and decent sanitation. We must strive for gender equality in the home, in the community and in the workplace. We must stop violence against women and children,” said Ramaphosa.

In a statement, the TAC on Wednesday said apart from a few members of government – it included Minister Motsoaledi as an exception – HIV and TB are not a state priority.

“The public healthcare system in many of our provinces remains in crisis with little hope in sight. Our members experience this crisis first-hand across seven of South Africa’s nine provinces.”

Civil society is being taken less seriously by government, it said, as shown by demands made during July’s AIDS Conference, which Ramaphosa said had inspired and better equipped the country to move forward.

If the health system isn’t fixed, the problem will continue and even deteriorate.

“We demand that the presidency announce concrete and immediate steps to ensure that all young people in South Africa have easy access to condoms and comprehensive sexual and reproductive health education in schools. Failure to do this will make a mockery of government’s efforts to reduce infection rates in young women and girls,” said TAC.

It made two other demands, crucial to the future of HIV treatment. First, it wants government, in collaboration with stakeholders, to develop a costed plan to ensure all those living with HIV have access to ARVs by 2020. Second, it wants the minister to publish a policy regulating the employment of healthcare workers in all provinces.

The two demands are aimed at addressing the gaps in the system. “Not enough is being done by government to respond aggressively to HIV/AIDS,” said TAC campaign officer Mary-Jane Matsolo. “There are still very much treatment gaps that we see in government clinics, particularly in rural areas,” she continued. While millions of people are reported to be on ARVs, there is little information and follow-up to ensure they continue to take their medication. Meanwhile, the system has faced serious shortages and drug stock-outs.

A crucial element in ensuring those who need help receive it is through community healthcare workers. Not everyone is able to get to clinics, due to their location, stigma or ill health, and community healthcare workers who visit patients are able to provide a crucial link in the system between the government’s stated policies and the realities people face in a system and society that, despite its gains, struggles to build on them. Matsolo said provinces differ in how they regulate healthcare workers, with many subcontracting to NGOs, and no standardised pay or conditions. “If we now drop the ball at this point in time we are going back in history,” she said.

The SA Medical Research Council on Tuesday released its estimate of causes of death in 2012, adjusted to factor in issues like the under-reporting of HIV-related illnesses. After recording an estimated 86,680 HIV/AIDS and TB deaths in 1997, the category peaked in 2006 with 306,396 deaths, before declining to 177,477 in 2012. The decline was likely due to government policies promoting access to treatment.

“Nonetheless, HIV/AIDS remains the leading cause of death, and efforts to provide access to treatment must be sustained and prevention efforts must be strengthened. A sizeable proportion of HIV/AIDS deaths were associated with TB. Efforts to strengthen and integrate the TB programme must be addressed,” the report said.

This week, an HIV vaccine efficacy study was launched across SA, the world’s first in seven years. The study could provide a path to a long-dreamt-of vaccine, but if successful, it will take years to study and implement. Even then, it will require a functioning health system. Ramaphosa and Motsoaledi must do more now to address the gaps in the system if the goal of reducing infections is to be achieved. DM