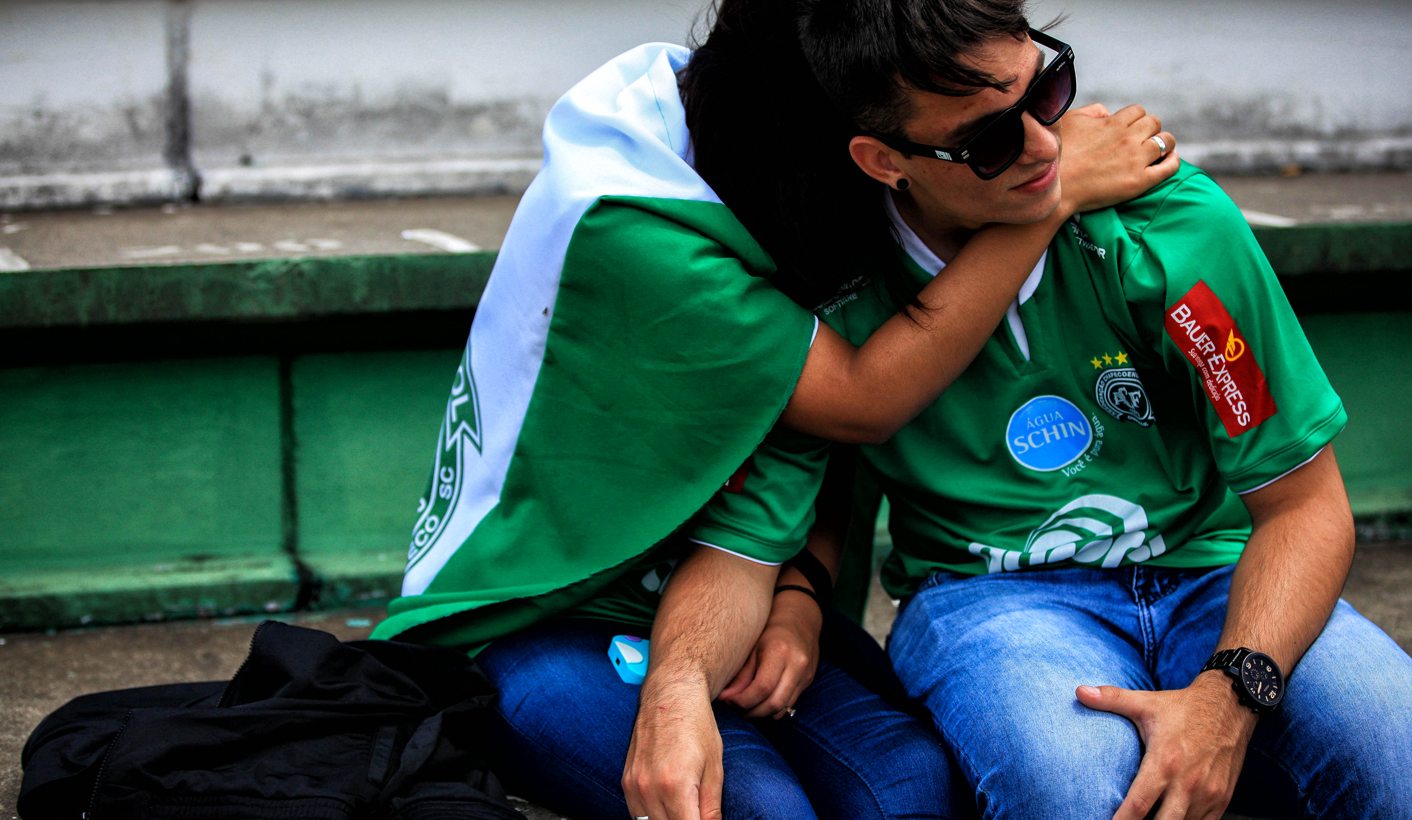 The response from soccer clubs in Brazil following the plane crash in which almost the entire Chapecoense squad died en route to playing in the Copa Sudamericana has been kind and heart-warming, even if the reality of it all has been utterly gut-wrenching. By ANTOINETTE MULLER.

Bill Shankly’s famous quote on football being more important than life or death is probably one of the most overused in sport. It is woven into narratives at every opportunity, but rarely has it seemed so relevant than in the wake of the plane crash that killed nearly the entire Chapecoense team when a plane carrying 77 passengers crashed en route to Colombia this week.

In disasters such as these, no death is more harrowing than another. More than 70 people died in the crash, including 20 journalists. The response to these tragedies, though, particularly from the sporting fraternity, has been incredibly powerful and if we believe that sport mirrors society, perhaps there is some good left in this world, particularly after the dog show that 2016 has been.

More than 15 squad players died in the crash as well as a number of the club’s technical staff. The plane was just five minutes away from its destination before it crashed. The pictures and the footage that have emerged since then have been chilling. The photo of three surviving players (who were not part of the travelling squad) sitting in the dressing room is gut-wrenching.

A rough translation describes the image as: “Total desolation in the changing room of Chepecoense. These are the players that did not make the trip. Devastating. What a f**king day.”

What a fucking day indeed, made somewhat worse by pictures shared on social media by various team members as they were getting ready to take off. What was supposed to be one of the greatest days in the lives of those players turned into one of the worst.

And then there’s the video showing the team celebrate in their dressing room after making history by reaching the final of the Copa Sudamericana, the first ever team from the Brazilian state of Santa Catarina to do so. The team’s vice-president, Ivan Tozzo, told cable channel SporTV: “There are a lot of people crying in our city. We could never imagine this. Chapecoense is the biggest reason for joy here.”

Memento mori is hardly a foreign concept. We are constantly reminded about just how quickly we can be ushered off this mortal coil and how insignificant our existence is. Sport is supposed to help us forget about those harsh realities so when the narrative of our fragility is woven into the sporting tapestry, those who love and enjoy it as a pastime are often more shaken than by other global events.

We mourn for the loss of life, but perhaps somewhat selfishly, we also mourn for the loss of distraction and that we are unable to insert a disconnect between ourselves and the events that unfold. These events aren’t as rare as we like to believe. The terror attack on the Sri Lankan cricket team, the Togolese national football team and a number of other plane disasters that have claimed the lives of teams have all shaken sports lovers in the past.

But it is the response to these tragedies that make the harsh reality a little less grim. And the response to this horror has been particularly heart-warming. In a time when everything seems like a right old mess, Chapecoense can be a proxy for the light that exists somewhere in the all the darkness.

They are a real Cinderella story and described by pundits in Brazil as the country’s “second team”. They have risen to the top flight of Brazilian football, having been in the fourth division in 2009. “Kind” and “joyful” are some of the words used to describe this group of players who met such an untimely end. It is perhaps no surprise, then, that the response to help them rebuild has been equally kind.

Most notable is that Atletico Nacional asked CONMEBOL to take the unprecedented step and award the cup to Chapecoense while a joint statement by Corinthians called on all in Brazilian football to help Chapecoense rebuild with “solidarity measures” that include free loan players to help the club finish the season. Clubs also requested that the club not be subject to relegation for the next three reasons should the club finish in the last four.

“This is a minimal gesture of solidarity that is now within our reach, but endowed with the most sincere goal of reconstruction of this institution and part of the Brazilian football that was lost today,” the statement said.

There is a reason why football is the beautiful game. There is a reason it is the biggest sport in the world. Football has the power to transcend all boundaries and the ability to unite more than it divides through its factions. Teams, even when they are rivals on the field, are connected by the love for a sport that has changed so many lives and which holds the power to change millions more, despite administrators’ best attempts to run it into the ground.

Football is family and, at times like these, it’s much more than a game. And it’s much more important than life or death. It is a light in a bitterly dark world. And it is an escape, even when its reality is the very thing we’re trying to escape from. DM

Photo: Supporters of the Brazilian soccer team Chapecoense gather at the Arena Conda Arena in Chapeco, Brazil, 29 November 2016, to perform a vigil in honour of the victims of the plane crash in La Union, department of Antioquia, Colombia. According to reports, 75 people died when an aircraft crashed late on 28 November 2016 with 81 people on board, including players of the Brazilian soccer club Chapecoense. The plane crashed in a mountainous area outside Medellin, Colombia as it was approaching the Jose Maria Cordoba airport. The cause of the incident is as yet unknown. Chapecoense were scheduled to play in the Copa Sudamericana final against Medellin’s Atletico Nacional on 30 November 2016. EPA/Fernando Bizerra Jr.