The Endgame: Zuma on the ropes as ANC tactical manoeuvre unfolds 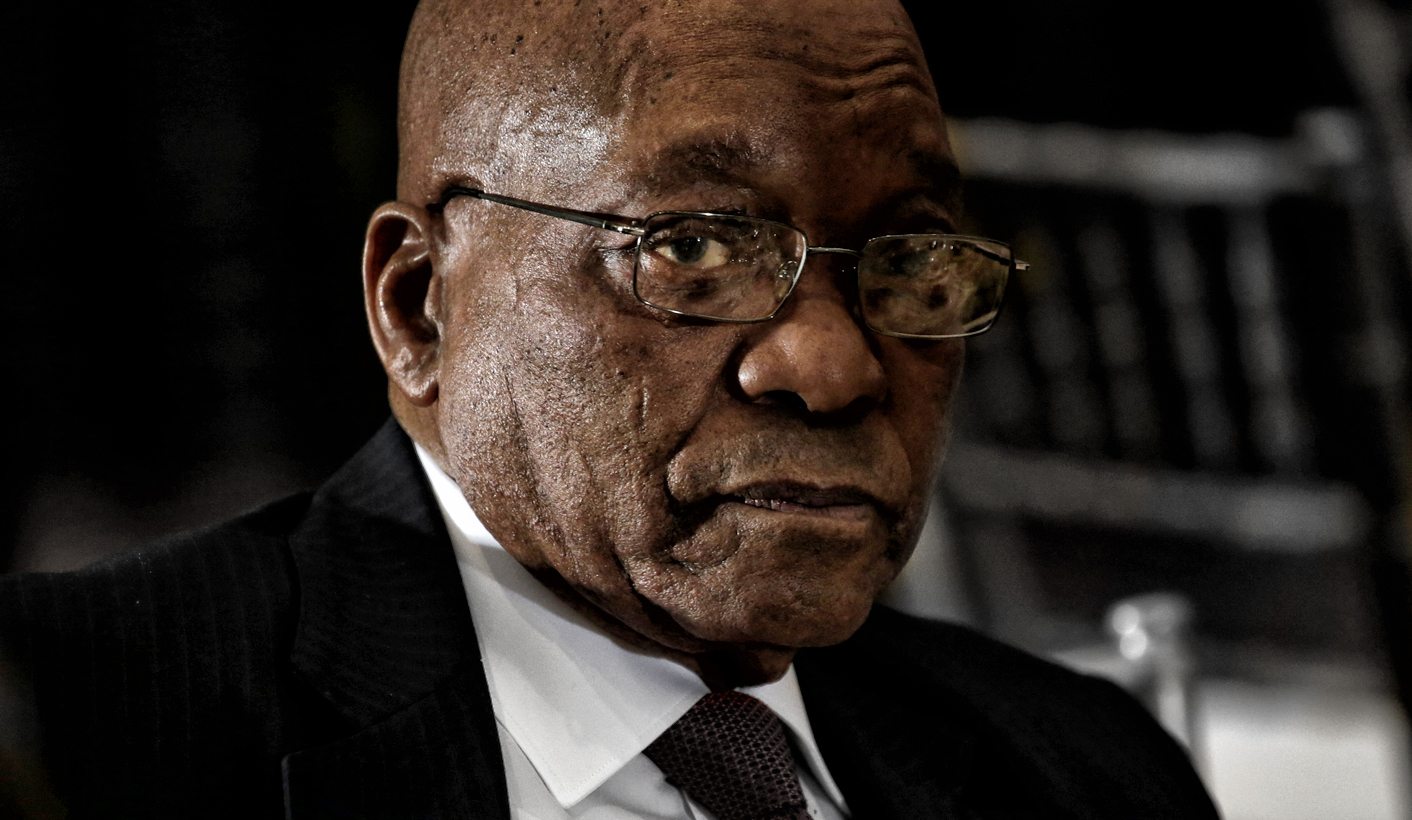 For the first time since his election as leader of the ANC, President Jacob Zuma is facing a rebellion inside the party’s national executive committee (NEC) – a structure that has the power to recall him as president of the Republic. A two-day NEC meeting has been extended into Monday as heated battles continue behind closed doors over whether to vote Zuma out of office. The president and his allies are trying to defer the vote but his detractors have a fall-back plan should their bid to remove him fail in the NEC. Whatever happens on Monday, this power play signals the endgame for Jacob Zuma. By RANJENI MUNUSAMY.

It has been a long time coming but the manoeuvre in the ANC NEC only happened when there was certainty that there would be a significant lobby of people ready to stand up to President Jacob Zuma. Prior to this weekend’s NEC, members were being secretly polled and lobbied by senior leaders fed up with the president. What they worked out was that out of the 80-member NEC, 34% would vote against Zuma and 30% would remain loyal to him. The balance was undecided, non-committal or unknown.

So they rolled the dice – even though this could result in a Cabinet purge.

If ministers who spoke out against Zuma in the NEC get sacked, there could be a move from members of the ANC in Parliament to table a motion of no confidence in the president. Only 52 ANC members out of the 249 in the National Assembly need to vote with the opposition for the motion of no confidence to pass. With the level of disgruntlement against Zuma growing, and the ANC chief whip Jackson Mthembu being amongst those who are speaking against the decline in the party, it would not be difficult to reach this number – even if there is division in the ANC ranks.

Anger and frustration has been building in the NEC, particularly after the Constitutional Court judgment on Nkandla, the overwhelming evidence of a corrupt relationship with the Guptas and, most especially, after the ANC’s performance in the local government elections. The clumsy investigation and attempt to charge Finance Minister Pravin Gordhan has prompted many ANC leaders to rethink their defence of the president. The onslaught against Gordhan, combined with the release of the Public Protector’s State of Capture report which spells out how the Guptas operate and abuse their political connections, proved to be the tipping point.

Some NEC members say they have wanted to speak up to tell the president that he is destroying the organisation and making a mockery of his duties as state president. There are several reasons why it took so long to confront Zuma at the NEC.

Unlike Thabo Mbeki, who was no longer ANC president when he was recalled, Zuma is present at all NEC meetings and it is somewhat intimidating to tell the senior-most leader to his face that he is rubbish at his job. Secondly, the president’s allies tend to shout down and attack those who challenge Zuma, as it has happened when Gauteng ANC chairperson Paul Mashatile ventured that the ANC should pay for the Nkandla upgrades.

Zuma is steadfast in his belief that he has done nothing wrong. Whether it is Nkandla, his relationship with the Guptas or the ANC’s electoral performance, Zuma speaks at the end of NEC meetings and shuts down whatever concerns are raised. For example, when the NEC met for four days after the August elections, the majority of members were distressed by the ANC’s drop in support and poor showing in the metros. However, when Zuma spoke at the end of the meeting, he contradicted all these views, saying he did not understand what the fuss was about. He said the ANC still enjoyed over double the percentage of the second biggest political party, the Democratic Alliance, and therefore its performance was good.

But the biggest impediment to confronting Zuma is the massive sway he still commands in the ANC and the prerogative granted to him by the Constitution to hire and fire Cabinet ministers. There is a major overlap between the NEC and Cabinet – meaning that whatever happens in NEC meetings has an impact on relations in Cabinet, and that people who are perceived to be hostile could lose their jobs.

Behind the scenes, however, Zuma is being challenged more and more. ANC chief whip Jackson Mthembu has refused to back down on the SABC and is determined to keep the heat on Hlaudi Motsoeneng. Gordhan has been quite direct in articulating the nefarious agenda behind the attempts to prosecute him, which apparently angers the president as he believes the finance minster is stopping short of pointing fingers directly at him. Gordhan appears to be beyond the point of caring who is outed, as was evidenced by the court action he initiated on the Gupta bank accounts.

Daily Maverick understands that the Cabinet has fought several attempts to adopt a resolution on Mineral Resources Minister Mosebenzi Zwane’s proposal for a judicial inquiry into South Africa’s banks. Ministers have apparently refused to be party to a resolution that South Africa’s big four banks be investigated for closing down the Gupta accounts.

Perhaps the biggest signal of the defiance building against the president was the ANC statement welcoming the State of Capture report. Zuma and his two Gupta appointed ministers tried to block the release of the report and are aggrieved by its contents. Yet the ANC said: “this report provides a concrete basis for the ANC and society in general to discuss the allegations contained therein and deal with its outcomes”. The report was distributed for discussion at this weekend’s NEC meeting.

While former Reserve Bank Governor Tito Mboweni and Cabinet members such as Tourism Minister Derek Hanekom and Health Minister Aaron Motsoaledi were apparently planning to speak out for some time, they have been bolstered by events of the last week when ANC veterans met twice with the party’s national working committee (NWC). The veterans, who had written to the ANC expressing their concerns about the state of leadership, were unflinching in their demand that a national consultative conference be held to deal with the crisis.

Zuma and his allies were forced on the defensive, but the veterans were also accused of ill discipline for airing the ANC’s dirty linen publicly. ANC secretary general Gwede Mantashe said however that agreement had been reached that a consultative conference be held ahead of next year’s scheduled policy conference.

The ANC’s integrity commission has also invited Zuma to meet with them on December 3 about concerns they have about his conduct. ANC spokesman Zizi Kodwa denied that Zuma has been called to appear before the committee, saying he was invited in his capacity as president to discuss the state of the ANC.

However, there has been talk in ANC circles that the president might have violated the ANC’s disciplinary code on at least three acts of misconduct spelt out in the ANC constitution. These include bringing the ANC into disrepute, behaving in a manner that has the potential to provoke division or impact negatively on the unity of the ANC, and abuse of office to obtain any direct or indirect undue advantage or enrichment.

It is of course difficult to subject an ANC president to a disciplinary hearing. But the integrity commission apparently wants to hear Zuma out on these matters.

All these matters lined up for the motion tabled by Hanekom for Zuma to step down. While in the past, Zuma and his allies have been able to quickly quash attempts to challenge him, Hanekom’s motion received support.

City Press reported that many NEC members were absent from the meeting on Saturday as they were attending Ekurhuleni Mayor Mzwandile Masina’s wedding in Stellenbosch. Many of them rushed back to Gauteng to attend the meeting on Sunday. However it appears that most of the day was taken up with arguing about whether to vote on the motion, with tensions apparently running high.

NEC decisions are taken mostly through consensus and only in certain cases are matters put to a vote. When no agreement was reached by Sunday evening, and over a dozen more people lined up to speak, it was agreed to extend the NEC by another day.

There is no doubt that Zuma is fighting for his political life. The fact that he is hanging on while it is clear that large sections of the ANC and alliance no longer want him as president is a sign of desperation; he and his allies need him to remain as president to keep their political and business network intact. If Zuma is recalled, the Gupta-funded network in the ANC that is hoping to define the future leadership core of the party will most certainly collapse.

Zuma might survive the NEC meeting and might retaliate by firing those ministers who orchestrated the move against him. But he cannot fire members of the NEC as they are elected by the ANC national conference, nor can he unseat ANC MPs, whose positions are determined through the election list. It is now clear that a significant section of these members want him out and neither he nor his supporters or financial backers can control what they do next. The NEC motion was just the first move to boot him out – and it already succeeded in a protracted debate with no easy resolution.

The countdown for Zuma’s exit has begun. DM