The Rottweiler, the Warders, the Dead Inmate and the Video Footage that spurred a Judge to action 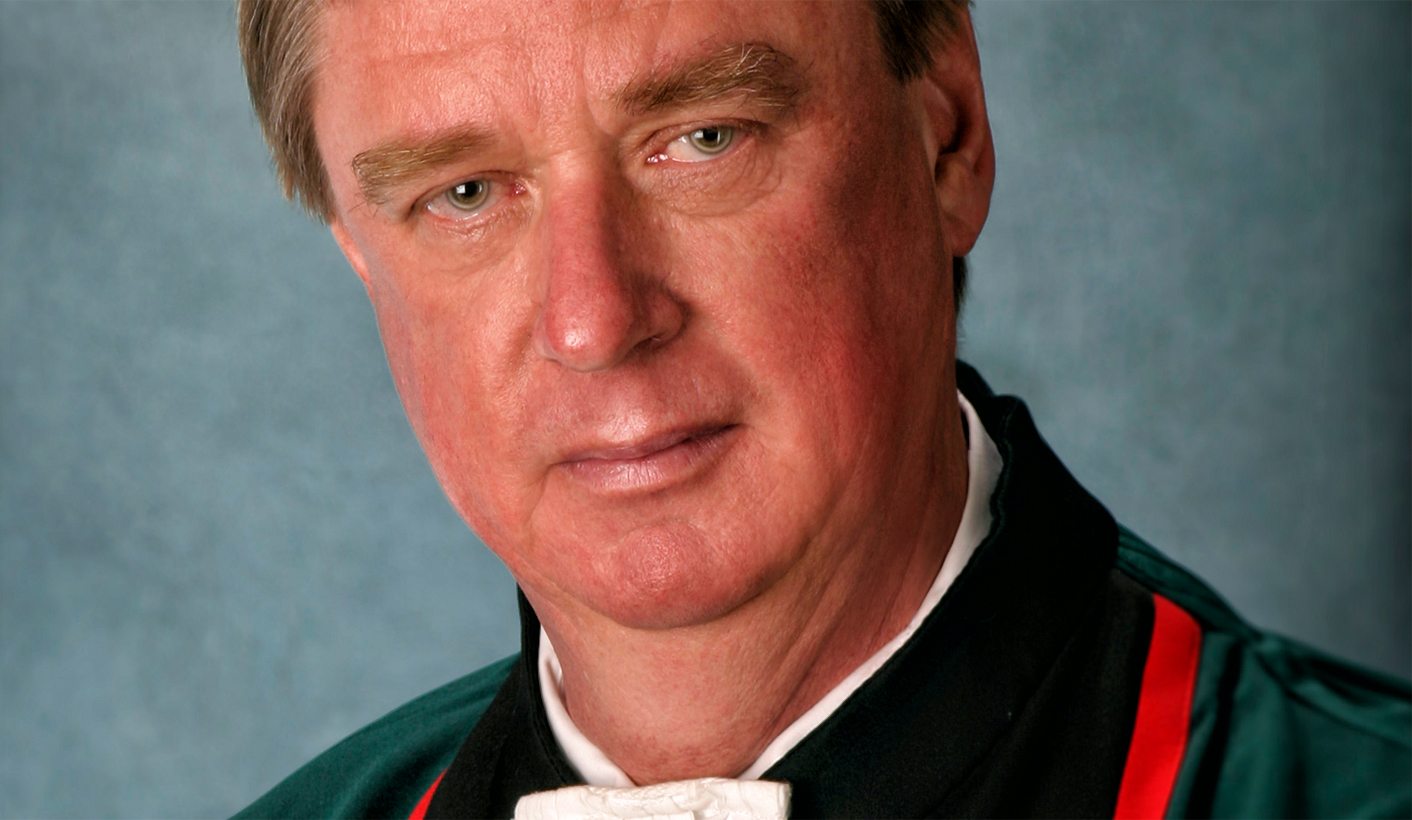 An assault on a prison inmate by warders so shocked a judge that he believes that, if a video of the incident were released in its entirety, it could lead to the collapse of SA’s global extradition treaties. By CAROLYN RAPHAELY of the Wits Justice Project.

Sometimes it takes a single incident, desperation, frustration or simply the gatvol factor to drive an individual to seek help. For recently appointed Judicial Inspectorate for Correctional Services (JICS) Inspecting Judge Johann van der Westhuizen, viewing CCTV footage of warders assaulting a Brandvlei prison inmate, kicking him in the head “like a football”, then watching Rottweilers drag the unnamed inmate from his cell, was the last straw.

The Rottweiler episode, which occurred nearly two years ago, has gnawed at the conscience of the retired Constitutional Court Judge since he was shown the footage, shortly after his appointment in April this year. Though the unnamed inmate died following the assaults, Van der Westhuizen was equally disturbed by the fact that none of the correctional officials involved has been disciplined to date.

“This video material has been around for 16 months and nothing has been done. I don’t know if what I saw constitutes torture. It’s definitely assault and may be murder, or at least culpable homicide,” he told a seminar on torture and assault in Western Cape prisons at Helderstroom Correctional Centre last week. “The Brandvlei footage is so shocking that if released in its entirety, it could lead to the collapse of SA’s global extradition treaties.”

As a result, Judge Van der Westhuizen wrote to the Minister of Justice and Correctional Services, the Deputy Minister, the DCS National Commissioner, the Regional Commissioner, and anyone else he could think of, requesting an investigation:

“I went through all the correct channels. We demanded progress reports and gave an end-August deadline for disciplinary procedures. Nothing significant happened.

“I finally received an incomplete report from the Department of Correctional Services (DCS) with no annexures after I took the risk of threatening the minister with media exposure. Nearly two years after the event, no one has been charged and no investigation or disciplinary processes concluded. Murder is murder, culpable homicide is culpable homicide. Now I’m forced to ask for help…”

Appointed by President Jacob Zuma to head the prison oversight body many inmates view as a “toothless dog”, Van der Westhuizen’s letter of appointment charged him with transforming JICS. Just for starters, he showed seminar attendees Blood on the Floor – a video he commissioned using official footage showing prison warders assaulting inmates at Brandvlei, Helderstroom and Tswelopele Correctional Centres – evidence some viewers regard as the tip of an iceberg of impunity.

When provided with the opportunity to present DCS’s version of events to the gathering, both DCS National Commissioner Zac Modise and Western Cape Regional Commissioner Delekile Klaas proffered non-committal responses. In fact, Klaas went so far as to tell the Wits Justice Project (WJP) that it was “highly inappropriate” for the Judge to have aired the footage.

However, Van der Westhuizen, 64, takes no prisoners. His choice of Helderstroom as a seminar venue was not accidental. Two months ago, following reports of torture, assaults and warder-on-inmate violence in the prison, Van der Westhuizen showed up unannounced on Helderstroom’s doorstep one Saturday afternoon:

“When I asked to see the affected inmate, my request was turned down. I was told he was too dangerous. I insisted, because I didn’t see how a guy with two broken legs and a broken jaw, who couldn’t even get out of bed, might be dangerous?”

JICS was established in 1998 to give effect to the Bill of Rights in the Constitution which Van der Westhuizen was intimately involved with drafting. So, it follows that the founding director of the University of Pretoria’s Centre for Human Rights and former Lawyers for Human Rights board member is on a mission to instil a human rights-based culture in the under-staffed, under-resourced organisation he now heads.

“Section Ten of the Constitution recognises the dignity of all and is the cornerstone of all other rights,” he explains. “Human dignity is the lodestar of a Constitutional democracy… Contrary to public perception, SA prisons are not luxury hotels. Correctional centres are not torture centres, cages or zoos either. They’re places where people are living, not animals, not disposable waste or those who’re cast out by society.”

Nonetheless, just one of the problems Van der Westhuizen has to contend with is JICS’s perceived and actual lack of institutional and structural independence. For example, the organisation’s budget is allocated by DCS – the department it is supposed to oversee – rather than the Treasury.

“Independence is a state of mind and I feel completely independent,” Van der Westhuizen counters. A breath of fresh air in the Inspectorate’s previously somnolent Centurion corridors, he has every intention of carrying out JICS’s mandate without fear, favour or prejudice while upholding the constitutional principles he values so dearly.

The reality, as Sonke Gender Justice National Prison Specialist Ariane Nevin recently pointed out to the Parliamentary Portfolio Committee on Justice and Correctional Services, is that unlike the Independent Police Investigative Directorate (IPID), JICS has no power to enforce its findings and recommendations: “Nor is there a concomitant obligation on the department to account for any of JICS’s findings. The lack of clarity on JICS’s powers, functions and ambit limits its effectiveness as an oversight body.”

Regardless, ensuring correctional officials are held accountable for their actions, increasing awareness of torture, human rights abuses and prison overcrowding are top of Van der Westhuizen’s to-do list. And he has no intention of taking orders from DCS about what he may, or may not, investigate. “Torture behind bars needs to be urgently addressed… People should know how difficult officials’ jobs are, but to see dogs dragging someone while others kick him to death, that’s just not on.”

Unsurprisingly, DCS consultant criminologist Elizabeth Grobler told Helderstroom attendees, “Brandvlei isn’t the first time such an incident has occurred, and it certainly won’t be the last.” Despite the Prevention of Combating and Torture of Persons Act which was passed in 2013, allegations of torture by prison officials have become increasingly common. Even so, there hasn’t been a single prosecution of any correctional official to date.

Clearly the use of force behind bars is highly contentious. In terms of the law, the only permissible force is minimum or necessary force, used to stop or prevent a dangerous situation. Any other force is regarded as gratuitous, excessive and unlawful. Yet prison officials operating in the context of the prevailing culture of violence appear to resort to violence as a default position.

According to Civil Society Prison Reform Initiative (CSPRI) lead researcher Gwen Dereymaeker, an average of 3,000 to 4,000 complaints of official-on-inmate violence are reported to JICS’ Independent Correctional Centre Visitors each year. The JICS 2015/16 annual report records 811 official-on-inmate assaults by correctional officials, an astonishing 316% increase over the numbers recorded in the 2014/2015 annual report.

After completing a DCS-commissioned research report entitled Brandvlei and Beyond, Grobler concluded that the violence and subsequent death of the Brandvlei inmate was attributable to gang warfare – a standard DCS response. Van der Westhuizen, however, is adamant that gang warfare provides only a partial explanation, is of limited use and is no excuse for a lack of action:

“This can never be the reason we won’t investigate, or prosecute. Torture, murder and assault are not something we can condone, or cover up. As Inspecting Judge, a Judge and an ordinary South African citizen, I can’t accept that we must accept the reasons people do things. That’s why we have the concept of mitigating circumstances.”

McCallum told the UNHRC how during the course of retributive attacks by prison officials for a warder’s death by stabbing, he was raped by a warder with a baton, shocked, beaten and forced to lie naked in a human chain with his nose in the anus of a fellow inmate. After ignoring five requests by the UNHRC to respond to these allegations, SA was found guilty of human rights violations.

Despite a UN directive stipulating that the assaults must be properly investigated and disciplinary proceedings instituted if necessary, none of the 60-80 warders involved was disciplined. And a damages claim by the first two litigants was dismissed by Judge Dayalan Chetty in the Port Elizabeth High Court earlier this year.

Now an application to appeal Chetty’s decision has been lodged with the Constitutional Court. “The Judge found the plaintiffs’ claims of torture to be products of their fertile imaginations and dismissed them,” Port Elizabeth human rights lawyer Egon Oswald explains. “This has lent credibility to the failures of the state, SAPS and all Chapter Nine institutions to properly investigate.”

Meanwhile, little seems to have changed since the Jali Commission of Inquiry – set up to probe alleged corruption, maladministration, violence and intimidation in prisons – released its 3,500-page report 10 years ago. After a five-year investigation, including testimony from 516 witnesses, many of the issues raised then have still not been addressed.

An entrenched culture of impunity, with little regard for consequence or culpability, indicates that SA has learnt little from the lessons of the past. Neither the Torture Act nor the constitutional obligation to promote and protect the human dignity of all prisoners appear to have made a tad of difference to those entrusted with inmates’ care – a situation likely to change dramatically if the retired Judge gets his way. Could the feisty Van der Westhuizen just be JICS’s Thuli Madonsela? DM

Carolyn Raphaely is a senior journalist with the Wits Justice Project in the University of the Witwatersrand’s Journalism Department. The project investigates miscarriages of justice and human rights abuses related to SA’s criminal justice system.