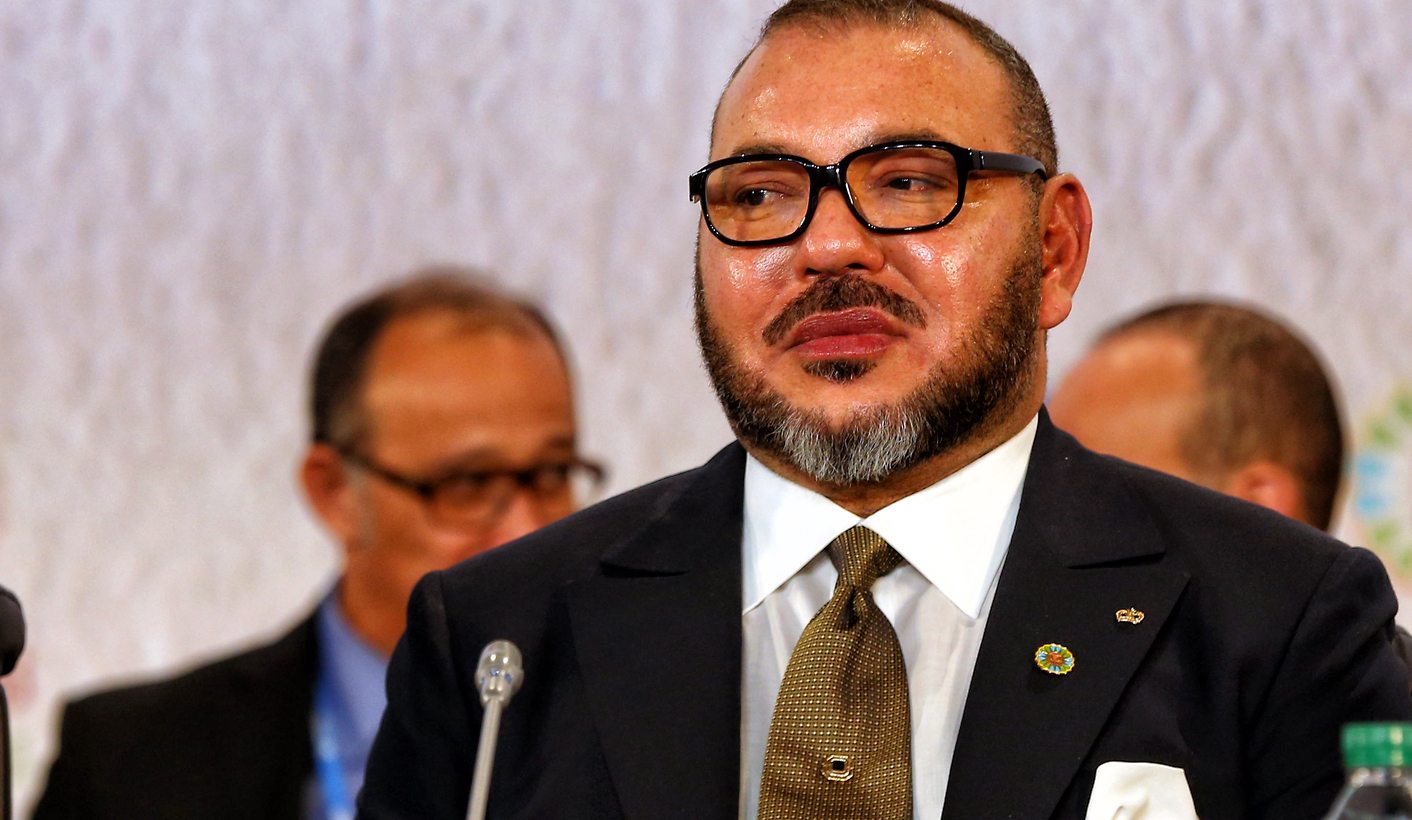 Morocco used its hosting of the COP22 to lobby for a return to the African Union. By Liesl Louw-Vaudran for ISS TODAY.

The photograph looks like the usual group of African leaders published at the start of every African Union (AU) summit. However, among the leaders attending the Africa Action summit on the margins of the United Nations (UN) meeting of states parties on climate change (COP22) in Marrakesh on November 16 is an unfamiliar face – Morocco’s King Mohammed VI.

Neither Mohammed VI nor his father Hassan II have attended an AU summit since Morocco walked out of the Organisation of African Unity (OAU) in 1984 in protest at the recognition of the Sahrawi Arab Democratic Republic (RASD) by the continental organisation. Mohammed VI, however, is making every effort to ensure that this changes.

The Moroccan king has pulled out all the stops to court African leaders in the past six months. He’s visited six African countries since asking to be re-admitted to the AU in September. COP22, attended by delegates from more than 100 countries, came at a very good time for the country. So far, 46 African countries have signed the landmark Paris Agreement on climate change that entered into force on November 3.

COP22 was an occasion for Morocco to showcase its modern infrastructure and renewable energy plans, which include an investment of over $45-billion in the next 10 years in adaptation and mitigation of the effects of climate change.

Morocco hosts one of the biggest solar electrification plants outside the town of Ouarzazate – a massive investment for a country with far fewer natural resources for commodities exports than its North African neighbours. But will these efforts be enough for Morocco to become part of the AU as soon as January 2017, as it would like?

The surprise decision by Mohamed VI for the return of Morocco was announced at the AU summit in Kigali in July. At the summit, 28 African countries signed a petition for the RASD to be expelled from the AU, to pave the way for Morocco to join. For the past few decades, Morocco has refused to sit in any international meetings alongside the RASD. For the RASD to be expelled, however, Morocco and its supporters, mostly in Francophone West and Central Africa, would need a two-thirds majority.

Morocco’s strategy, however, is to join the AU without pre-conditions and work “from within” for the de-recognition of the RASD, led by the Polisario Front, an insider told ISS Today.

It won’t be straightforward, however. Heavyweight countries like South Africa and Algeria, backed by countries like Zimbabwe and Equatorial Guinea, are determined that the issue of Morocco’s continued claim over the Western Sahara be resolved before letting the kingdom into the AU. Lifting the occupation of Western Sahara is seen as “the last anti-colonial struggle” to be fought by the AU.

Pro-Moroccan media have accused AU Commission chairwoman Nkosazana Dlamini-Zuma of wanting to “sabotage” Morocco’s plans. According to AU rules, if an African country asks to join the organisation, the commission’s chair should send a letter to all member states. If a majority agrees, the issue will be tabled at the AU Assembly. The request for adhesion was officially received by the AUC on September 22, but the letter was only sent out on November 3 – a delay some believe was intentional.

The pro-Morocco camp is banking on Dlamini Zuma’s successor being more favourable to Rabat. One of the frontrunners, Abdoulaye Bathily, the former UN special representative for Central Africa, is from Senegal, one of the strongest advocates for Morocco’s membership and for expelling the RASD. The Kenyan foreign minister, Amina Mohamed, another strong contender, is also seen to be in favour of Morocco’s adhesion.

The AU, an organisation that strives to become financially independent, could clearly benefit from a new member that is not as dependent on oil exports as many of its other big funders. Morocco is fairly stable, despite the constant threat of terrorism, but pro-democracy activists will emphasise that Morocco is still a monarchy, albeit a constitutional one.

Hichem Ben Yaïche, editor of the Paris-based New African (French) and African Business magazines, told ISS Today it is regrettable that Morocco’s “strategic error” in leaving the OAU has for years divided the continent and prevented the North Africa region from being fully functional.

“There are two blocs within the AU, those mobilising in favour of Morocco and those against, led by Algeria and South Africa. This is extremely divisive and destructive for the organisation,” he said.

Algeria is very influential in the AU, having occupied the position of commissioner for peace and security since the AU’s inception in 2002.

A good sign, according to Ben Yaïche, of a possible rapprochement between Morocco and Algeria was the presence of Algeria’s foreign minister Ramtane Lamamra, a former AUC commissioner, at COP22. Lamamra is one of the best diplomats Algeria has ever had, with a thorough knowledge of the AU and the UN, he says.

South Africa’s principled stance over Western Sahara has in the past negatively influenced its relations with Morocco. In 2004, Rabat recalled its ambassador to South Africa, reducing its diplomatic presence in Pretoria to the level of a chargé d’affaires.

Earlier this year, South African media reported that Morocco is planning to send a new ambassador to the country. However, by the end of last month, the envoy still hadn’t received his accreditation from the South African authorities.

Many observers have asked why Morocco has decided to join the AU now, after shunning it for so many years. According to Ben Yaïche, this is primarily driven by economic realities. Morocco has sizeable investments across Africa, notably in the banking and transport sectors.

“Morocco realises that its economic expansion needs to be backed up by political links. It has to be at the centre of where political discussion are taking place: the AU,” he says.

The World Bank, in its latest country assessment, says the expansion of Moroccan companies into West Africa could potentially play an important role in boosting global value chains.

On his recent visits to Rwanda, Tanzania, Gabon, Senegal, Ethiopia and Madagascar, Mohammed VI signed a number of agreements that could see Moroccan business potentially moving outside of its traditional zone – even if it remains far behind African investors like South Africa and Nigeria. These included air service and protection of investment agreements.

In Ethiopia, plans were unveiled for a new fertiliser plant that would amount to an investment of $3.7-billion. The plant, using Moroccan phosphate, is destined to provide Ethiopia’s fast-growing agriculture industry with all the fertiliser it needs and would be Morocco’s biggest investment outside the country.

Ethiopia, which houses the AU headquarters, could potentially be an important ally for Morocco, even though it is one of the African countries that officially recognises the RASD and has been a campaigner for the independence of Western Sahara.

In his speech at the opening of the Africa Action summit during COP22, Mohammed VI said Africa is paying too heavy a price due to the effects of climate change, which have already resulted in 10-million refugees. Morocco will take up the cause for renewable energy, notably by creating a research centre on climate change to service the rest of the continent. Morocco is “determined to enhance its contribution to defending the vital interests of the continent, alongside sister nations and, soon, within the African Union,” he said.

The adhesion of Morocco should be tabled at the upcoming bi-annual summit of the AU Assembly in Addis Ababa on 30 and 31 January – when it will become apparent whether the king’s efforts to woo African leaders have paid off. DM