Cricket: Captain Faftastic scores a mint century on the... 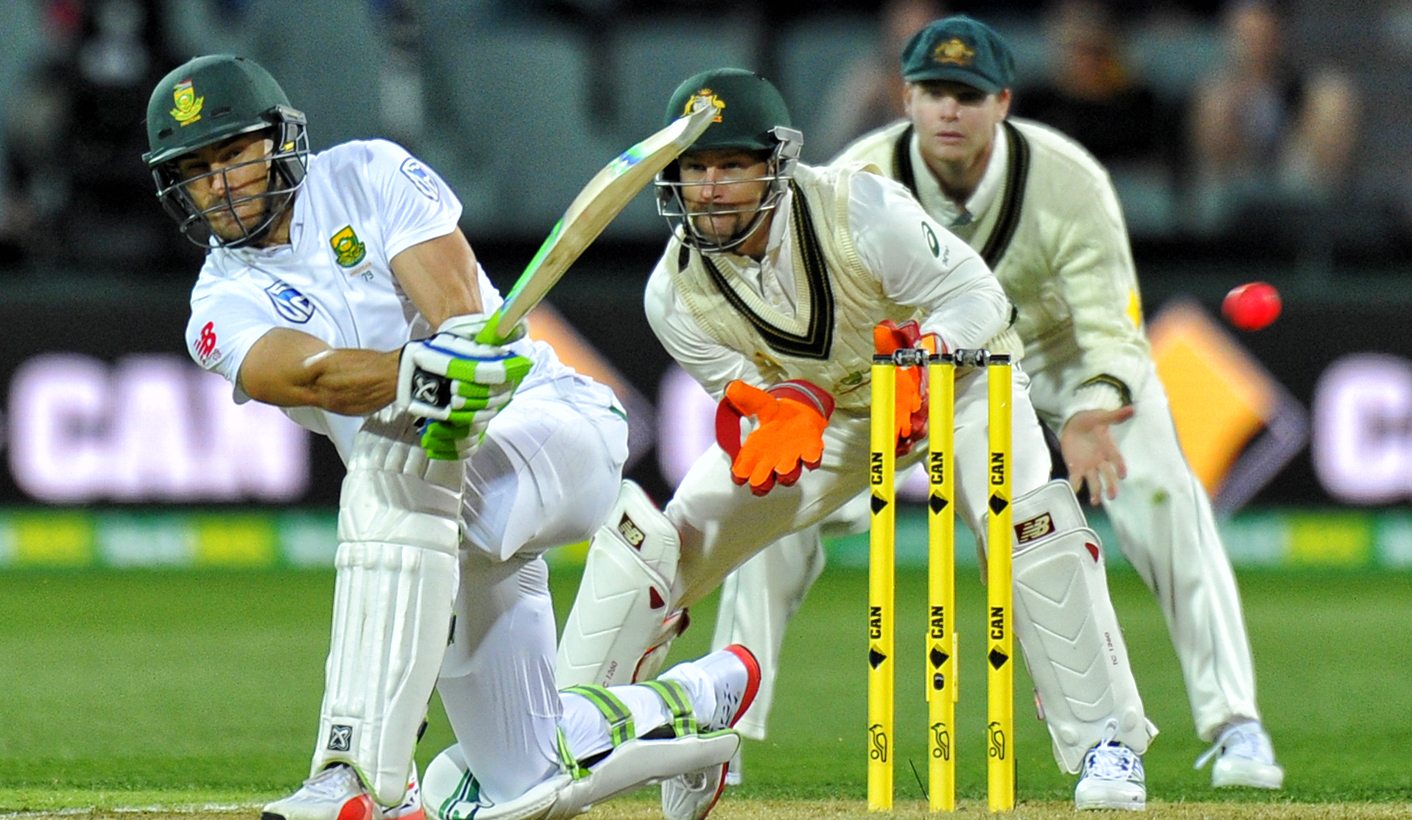 Cheeky declarations, feisty Australian bowlers and a fine century by Faf du Plessis all ensured that the first day of the day-night Test in Adelaide was exciting viewing. By ANTOINETTE MULLER.

On a day where South Africa’s batsmen left much to be desired in their shot selection and in a week where all eyes have been on Faf du Plessis, after he was found guilty for a level two breach of the International Cricket Council’s Code of Conduct, he’d have perhaps been forgiven if he had blipped under pressure.

But Du Plessis thrives in these situations and if anyone needed more proof that captaincy suits him, this was it.  Walking out to boos ringing around the ground, Du Plessis showed determination right from the start. While he usually prefers dropping anchor, Du Plessis upped the ante but never the risk. A wonderfully crafted innings with cover drives and flicks aplenty saw him notch up his second hundred at Adelaide.

Du Plessis ended unbeaten on 118, and it came at his highest-strike rate for a score of a hundred or more by quite some margin. Du Plessis notched up his ton at a strike rate of 71.95, much higher than his previous best effort of 137 at a strike rate of 54.36, achieved against New Zealand in Port Elizabeth in 2013. It was more than two times that of his last hundred at Adelaide in November 2012, which saw him grind out an unbeaten 110 at a strike-rate of just 29.25.

As far as memorable knocks go, this will go up there as one of the best ever by a South African captain. Australia’s quicks were ruthlessly aggressive, but Du Plessis attacked back. With runs seemingly at a premium in these conditions, his adaptability was extraordinary.

Du Plessis’ colleagues, though, were underwhelming. Having won the toss and electing to bat first, South Africa’s batsmen struggled with the extra nip from the pink ball that was evident almost right from the start. Save for Stephen’s Cook dig at the top of the order – a hideously constructed 40 off 99 deliveries – the rest were underwhelming. Kyle Abbott deserves credit for sticking it out with Du Plessis for a 54-run partnership, but South Africa will have to hope that they do not come to rue this lack of application.

But Du Plessis’ hundred was just one facet of a brilliantly entertaining day, though. The skipper’s declaration, with South Africa on 259-9, once again revealed a man not afraid to back up all the talk with action, not afraid to make some bold decisions.

The so-called twilight session offers a unique opportunity for bowlers to make inroads, but most captains would probably prefer to have it happen organically. Not Du Plessis. Even when taking into account that South Africa were nine wickets down, the captain decided to roll the dice and give his bowlers a chance at a time when the ball was nipping moving through the air.

More critically, Du Plessis declared when David Warner was not allowed to open. Warner had been off the field receiving treatment for an injury and overstayed the leeway time of 15 minutes by six minutes which meant he’ll have to wait his turn. Du Plessis would have known this and would have known just how irksome it would be to the Aussies. Indeed, when Steve Smith was told by the umpires that Warner would have to wait, he was visibly irritated.

The declaration decision, then, was as much about getting under Australia’s skin – something he has been doing very well throughout this whole tampering saga – as it was about trying to get a breakthrough in conditions that would have assisted the bowlers just a touch more.

Australia’s openers, though, managed to survive 12 overs with rookie opener Matt Renshaw doing a fine job of leaving and defending. South Africa’s were probably a bit guilty of bowling too full and not forcing the openers to drive more, but their gusto can’t be faulted and if day one is anything to go by, we’re in for on heck of a contest. DM