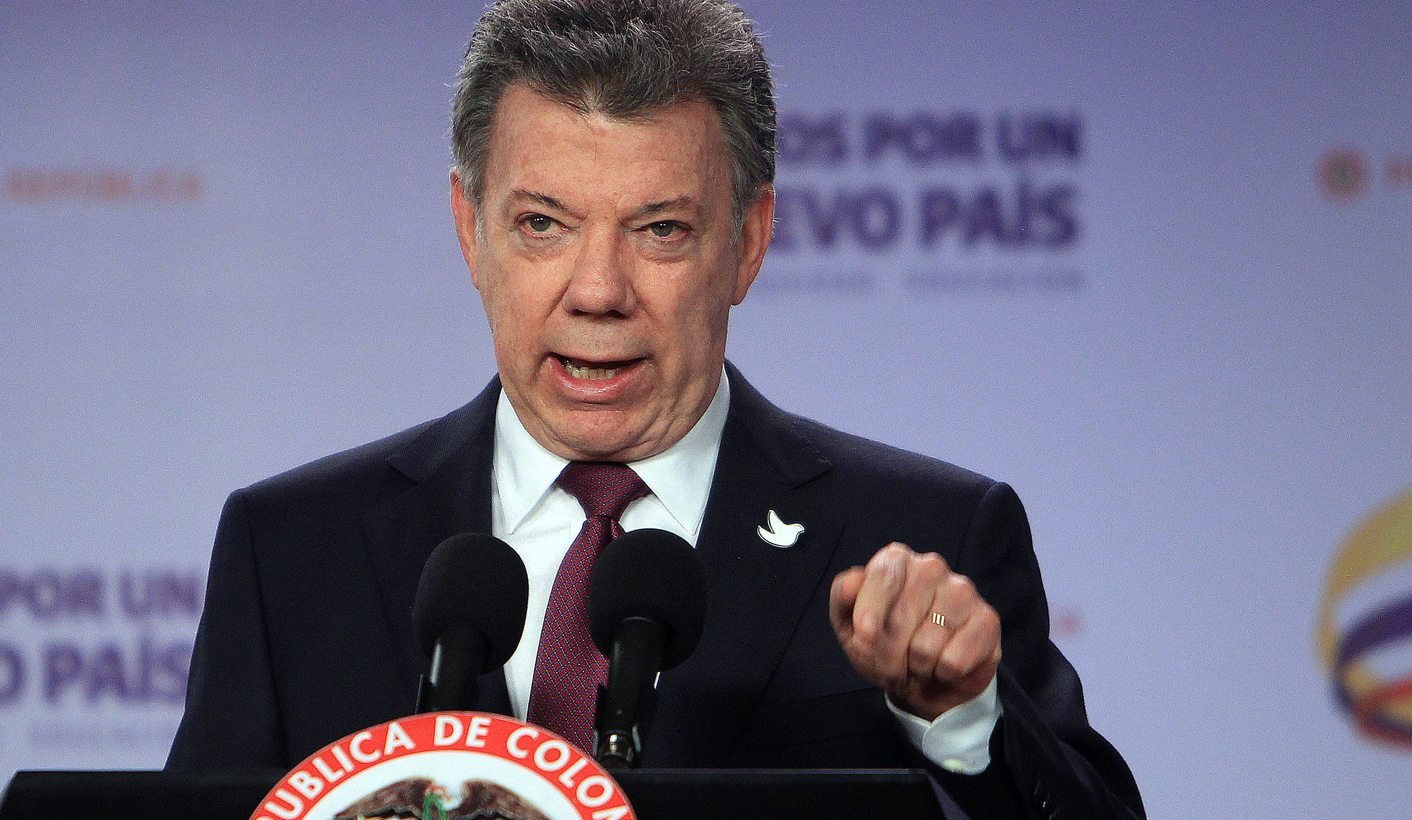 From the white dove on his lapel to the dove-shaped biscuits on offer in the Casa de Nariño, peace is the presidential brand for Colombia’s President Juan-Manuel Santos, the winner of the 2016 Nobel Peace Prize. By OLUSEGUN OBASANJO, GREG MILLS and DICKIE DAVIS.

Southwest of the capital Bogotá, carved out of sweltering jungle, the military base at Tolemaida is described as the “home” of the Colombian Army. Its 70km2 span includes the home of Colombian Special Forces, Army aviation, and a 25,000-strong engineering corps.

Tolemaida’s rapid development this century is a metaphor for the positive changes in Colombia.

Once “on the verge”, in President Juan-Manuel Santos’ own words, “of being a failed state”, today Colombia is a definitive turnaround country.

Much of this has been down to improved security.

By the late 1990s, “one-third of the country”, says Santos (Colombia’s territory is roughly the size of South Africa’s), “was under the control of the state. Another third was controlled by paramilitaries, and another one-third by drug-traffickers”. Colombia was a metaphor for a narco-state, with 60 murders per 100,000 of the population, and more than 3,500 kidnappings yearly. The national budget was just $18-billion, and poverty stood at over 60%.

“In order to have peace,” reminds Santos, who served as Minister of Defence before winning election as President in 2010 and, again, in 2014, “you have to win the war, to negotiate from a position of strength.”

After the collapse of a peace process with the FARC guerrillas in 2000, the government poured fresh resources into the armed forces and police. The defence budget soared from $1.5-billion annually to $10-billion, and the numbers of soldiers tenfold to 240,000. The investment was enormous, especially in talent, and materiel choices were pragmatic and focused. With the second largest Blackhawk fleet in the world, to provide one illustration, Colombia’s army now has more than 500 helicopter pilots.

A 10-year, $10-billion American assistance programme was channelled into Plan Colombia, linked to bringing down annual cocaine production which had mushroomed to over 600 tonnes. The end of the Cold War has reduced external funding for the FARC, which was replaced by drug income. With a street value of more than $2-billion, the coca crop transformed FARC into a serious force of 35,000, threatening at the gates of Bogota.

Coupled with air power and improved intelligence, the Colombian Army soon had the FARC and fellow ELN guerrillas on the back foot. Today the FARC numbers little more than 6,000. “Peace is their victory,” says Santos today of his armed forces.

But this was not all. Better security and investor-friendly policies saw a trebling of Colombia’s licit exports to $60-billion, while national poverty more than halved. Daily oil production doubled to one million barrels between 2004 and 2012, the government budget expanding to $110-billion by 2015.

As Defence Minister Luis Carlos Villegas observes, “You can’t do security without economic growth, and you can’t do economic growth without security.” Local ownership is part of this success, as is the need for a bottom up approach, championed by Santos’ presidential predecessor, Alvaro Uribe, who made it his business, among other aspects, to visit one or more of Colombia’s 1,200 municipalities every weekend.

However, President Santos’ plans for peace received a setback last month when a national referendum narrowly rejected a deal he had negotiated over four years with the FARC.

Despite this setback, now armed with a new deal which he plans on taking to Congress, the President cuts an energetic and confident figure.

From the perspective of Bogota’s Casa de Nariño Presidential Palace, the referendum loss has been “a blessing in disguise”, enabling “a much better agreement with much wider support”. The “50:50 national division” has “given us an opportunity to have a national dialogue”, he notes, “allowing us to go to the next difficult job, the construction of peace”.

As both he and Minister Villegas acknowledge, Colombia is not a perfect country. “It’s full of problems,” they say. For one, coca production is rising once more, giving the guerrillas, in or out of uniform, considerable resources.

But there are other fundamental concerns.

Nelson Mandela suggested in 1986 to the Commonwealth Eminent Persons Group that he, and the ANC, should be made part of the solution and not just the problem, a message he wanted the then South African government to hear.

Still, the biggest challenge for getting a peace to stick, Africa teaches, is not to get carried away with the short-term transactionalism of the deal, but instead to focus on a long-term developmental agenda. At its core this requires going beyond substituting one set of elites for another; instead, necessitating genuine, competitive economic reforms. It demands a focus on the rural areas, often neglected by governments since these are usually considered too far from the centres of power. Such a reform agenda has to focus on transparency, and regulatory process, and avoid excusing bad behaviour for past wrongs, without which it is difficult to draw boundaries between the party, personal and the political, between family, tribal, religious and party interests and public obligations.

Changing the external narrative from war to peace, and in so doing reducing business risk, also takes time. For many, despite the enormous gains, the mental image of Colombia is that of Netflix’s Narcos, epitomised by Pablo Escobar, and not the country of prosperity and peace.

From the white dove on his lapel to the dove-shaped biscuits on offer in the Casa de Nariño, peace is the Santos presidential brand. As he puts it, “There is no more sublime objective than to live in peace.” It’s also illustrative of that Colombian attention to detail again. As the President argues, “Usually, if you plan well, things go better.”

As this statement implicitly points out, however, there is something else, too, that makes Colombia’s turnaround story resonate beyond the Americas. The security transformation which underpins the peace deal relied on encouraging formidable human capacity – from Tolemaida to the Casa de Nariño. DM

President Obasanjo, Dr Mills and Major-General (rtd) Davis are among the co-authors of ¿UN GRAN QUIZÁS? Colombia: Conflicto y convergencia, which was launched by The Brenthurst Foundation in Bogotá this month.

Main Photo: Colombian President Juan Manuel Santos, speaks during a press conference at Palacio de Narino, in Bogota, Colombia, 03 October 2016, one day after Colombians narrowly voted ‘no’ in the referendum on the peace deal between the Colombian government and the FARC rebel group. EPA/MAURICIO DUENAS CASTANEDA