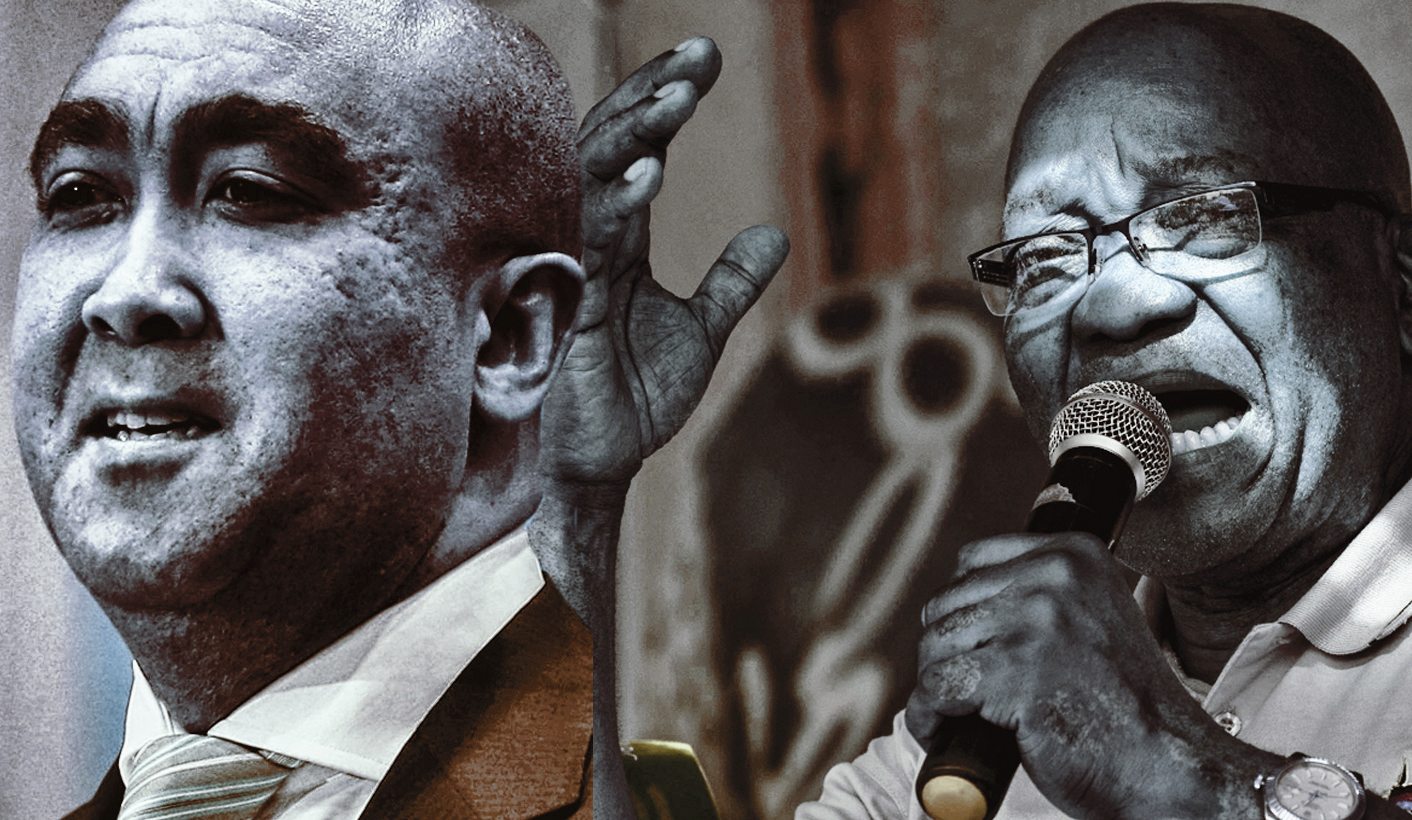 A court application by civic rights groups Freedom Under Law and the Helen Suzman Foundation has slammed the accelerator on events surrounding the survival of National Director of Public Prosecutions Shaun Abrahams. It has hauled out the hate mail between Abrahams and Hawks head Mthandazo Ntlemeza and ripped open a rare window into the power play over the prosecution of Finance Minister Pravin Gordhan. But what it has also done is throw up so much dust that we’re all left a little, or a lot, confused about what exactly the President is up to. Is he feeding Shaun the sheep to the wolves or is he being the wily old wolf himself, cleverly using the law to protect his man? Long time NPA watcher MANDY WIENER wades in.

Seven days is all it took for President Jacob Zuma to act against National Director of Public Prosecutions Shaun Abrahams. Just one week after a deadline imposed on him by Freedom Under Law and the Helen Suzman Foundation, Zuma wrote to Abrahams giving him notice of his intention to suspend him and asking him to provide reasons why he should not be suspended.

Now this shouldn’t, in theory, surprise us. Zuma is known to be unpredictable and some of his decisions are inexplicable. But when viewed against the President’s prior pattern of behaviour in similar instances, his spring to action could be seen as rather baffling.

It took three scathing judgments by separate courts in different matters, the findings of an independent committee headed by a retired Constitutional Court judge, repeated requests from the NDPP, several inquiries by Parliament and finally a judgment striking her off the roll as an advocate, before the President took any action against Abrahams’ deputy Nomgcobo Jiba. All along, the President argued that he wanted to await the outcome of the General Council of the Bar’s application to have Jiba struck off the roll, before taking any action against her. It took months and months and months.

In a judgment handed down in the Western Cape High Court in May 2016, in an application brought by the Democratic Alliance, Judge MJ Dolamo condoned Zuma’s approach:

“I therefore do not find it irrational for the President, in the circumstances, to take the view that it is best to await the outcome of the GCB application which would provide a better guarantee for ensuring the constitutional safeguards for all concerned.

“Even if I am convinced that the President should have decided otherwise, I am not at liberty to intervene. I can only intervene if it can be shown that the President exercised the power bestowed upon him by section 12 (6)(a) of the NPA Act in a manner manifestly at odds with the purpose for which the power was conferred. This has not been shown to be the case.”

Yet this time around, Zuma has been swift and decisive. And this action has the clever kids in the legal corridors speculating about what exactly the President is up to here.

At first blush, it looks like Zuma is (to use a much loved South African expression of late) throwing Abrahams under the bus. In the acerbic and acrimonious hate letters between Ntlemeza and Abrahams, it was immediately evident that the two were not on the same team, at least not anymore. The prevailing narrative has been that Abrahams was doing the bidding of political powers in prosecuting Pravin Gordhan and that he and Ntlemeza were colluding to see this done. By strategically releasing the correspondence in his own court papers, Abrahams was at pains to show that he is his own man and was not acting on behalf of Camp Zuma.

In a sitdown interview with me the day after he announced the withdrawal of charges against Gordhan, Abrahams also firmly stated that he would prosecute a sitting President and specifically prosecute Jacob Zuma if he had a case to answer to.

This could mean that the FUL/HSF application was a perfectly plated opportunity for Zuma to use to actually get rid of Abrahams and give the appearance that he was doing the right thing. Abrahams was no longer malleable and like so many suspended NDPPs before him, had perhaps begun to show too much backbone. Lurking like a big fat Gauteng flash flood thundercloud are the 783 charges of fraud and corruption against Zuma which could potentially be reinstated pending a decision by the Supreme Court of Appeal.

It’s also crucial to remember that Nomgcobo Jiba was really the President’s first choice for NDPP but in light of all the bad judgments against her, Zuma could never have elevated her to head the organisation. That meant he had to go with someone that Jiba was comfortable with – that someone was Shaun Abrahams. In the grander political picture, Ntlemeza is of far more value to the President and if he had to choose between sacrificing Ntlemeza or Abrahams, there’s little doubting who he would go with.

But then there’s the more strategic, nuanced view that has gained some traction in the country’s legal chambers. That is that Zuma has employed a savvy tactic by writing to Abrahams and giving him until November 28 to provide reasons why he should not be suspended. Zuma is a master of the art of kicking for touch and buying time and that is what he may successfully achieve here. By writing to Abrahams, he has effectively taken the action which FUL/HSF are asking for in their court application. Zuma kills their request because he can reasonably point to his letter to the NDPP as evidence that he has actually done something. It is a lesson he quite evidently took from Judge Dolamo’s ruling in the Jiba matter.

In his answering affidavit filed this week, Zuma suggests this is exactly the case he will make. He describes the court application as “premature” and an “abuse”:

“The launching of this urgent application, well knowing that I am in the process of considering exercising my power in terms of Section 12 of the NPA Act, is an abuse of the court process and is at best for the applicants premature. The Honourable Court should show its displeasure against the applicants and dismiss the applications with costs.”

Zuma also explains that it is not a given that he will actually suspend Abrahams or set up a commission of inquiry:

What this could mean then is that once the dust settles and Zuma has received Abrahams’ submissions, he could just decide not to suspend him. Abrahams will survive and Zuma will keep control over the man at the helm of the prosecuting authority. That is until he is forced to remove him by a firm court decision, baring in mind that there are various bids being made in parallel to have Abrahams struck from the roll of advocates, much like Jiba was.

Whatever Zuma’s endgame here, precedent tells us that Abrahams’ life span in the office of the National Director of Public Prosecutions will not be a long one. (Sadly he will have to leave behind the personal gym he’s had constructed since he took occupation, treadmill, exercise bike, boxing bag and all). Since 1994, not one NDPP has ever served out a full 10-year term. In fact, only Bulelani Ngcuka made it past the halfway mark. On average, the survival rate is around two years. If Abrahams is suspended sooner rather than later, along with prosecutors Sibongile Mzinyathi and Torie Pretorius, it will mean that a large swathe of the NPA’s leadership will be wiped away. Remember, deputies Lawrence Mrwebi and Jiba are already on suspension. Will this leave the organisation rudderless? Quite the opposite. It may be just the renewal that is required. This is a view shared by a number of senior prosecutors I spoke to this week.

“A lot of our people are pretty sceptical about the President’s decision to write to him. We are suspicious. We all believe it is tactical; however if there has to be a sacrifice and he is thrown to the wolves, let him be sacrificed,” one experienced advocate ranted. “The NPA will finally run itself. Those people at the top are all so contaminated. There are ethical, wonderful people throughout the NPA. In fact, if they are not there to hinder people, there will be more prosecutions being done, more robust decisions being made. Let them go, finally there will be peace in the organisation.”

Vastly experienced deputy directors Silas Ramaite or Willie Hofmeyr could act as NDPP and keep the ship afloat while lawmakers get cracking on a process to recruit a new NDPP along the same approach taken to appoint the Public Protector. In order to be entirely credible, it simply cannot be that the President appoints the very person who has to make the decision on whether or not to prosecute him.

“They must start changing the rules,” the prosecutor desperately demands. “We must finally be able to appoint in an open, transparent process. Let the people choose a person of the people, for the people.”

This could be the only way to rebuild the credibility and integrity of a crucial organisation that has been eroded and deeply scarred by the events of the past two decades. It needs renewal for the sake of the entire country and for establishing faith in the rule of law. If that is the ultimate result of Zuma’s baffling response to the FUL/HSF application, then we are all the better for it. DM