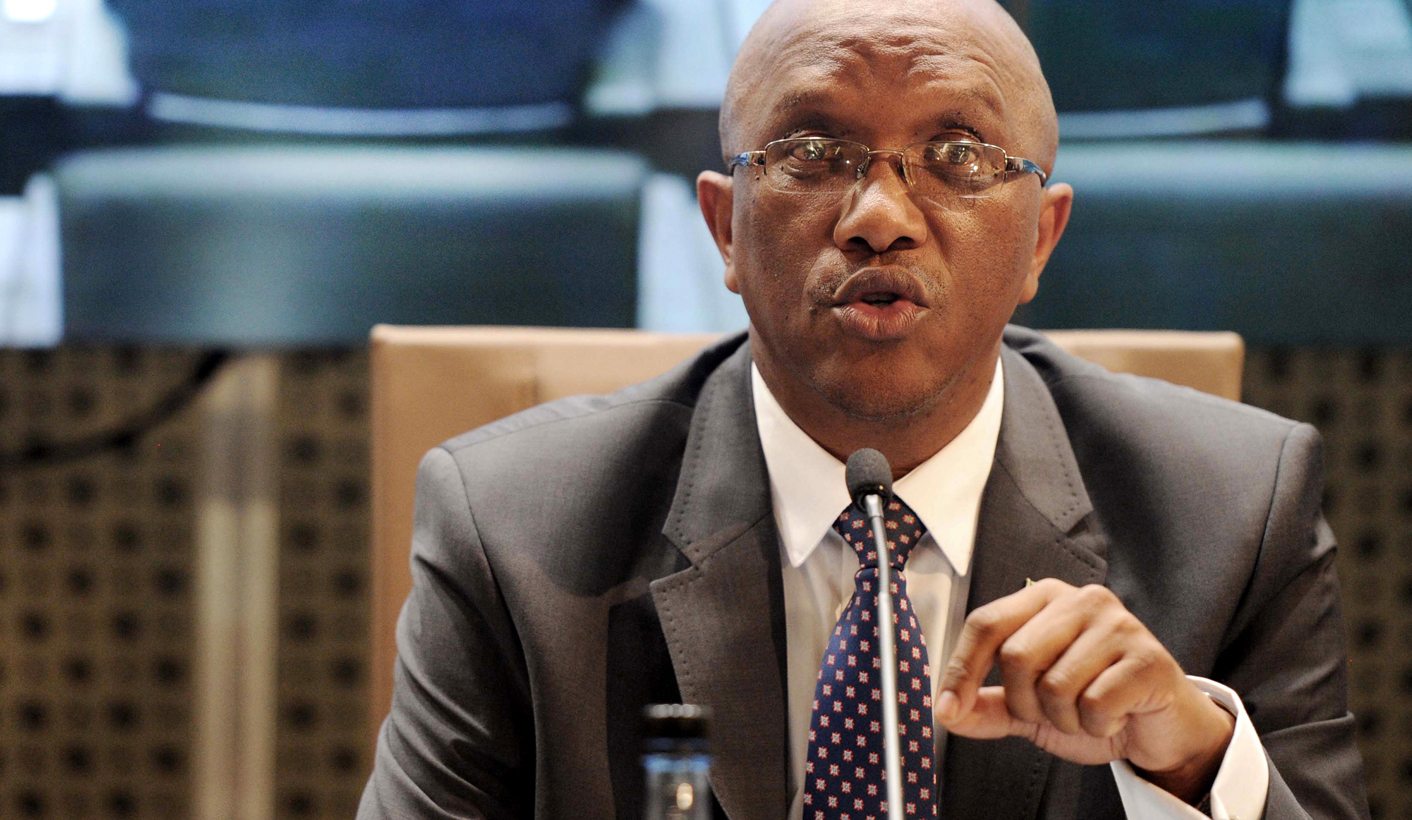 Lost to fruitless and wasteful expenditure: R1.37-billion, 70% of it gobbled up by Prasa, Nomvula Mokonyane’s department of Water and Sanitation as well as three departments in the education sector. Unauthorised expenditure hoovered up R925-million of public funds while around R46-billion was lost to irregular expenditure. From these figures it is clear South Africa is not a poor country. It is one where billions has been lost to mismanagement, corruption, indolence and indifference. Imagine what we could be if we could find a way of stemming the tide. By MARIANNE THAMM.

Stemming the tide. That indeed is exactly what Deputy President Cyril Ramaphosa tried to imagine when he veered off from his written keynote address delivered at the fifth expanded public works programme summit in Pretoria on Tuesday, a day before Auditor-General, Kimi Makwetu released his audit outcomes.

Sitting at the head table were two of President Zuma’s human shields, Minister of Co-Operative Governance Des “Seven days at the Guptas” van Rooyen as well as Minister of Small Business Development Lindiwe “Blame it on Business” Zulu.

One can only imagine what might have run through their minds (if anything) when Ramaphosa, who is chair of the public employment inter-ministerial committee, looking up at around 600 gathered delegates and – sounding, if not only for a moment, dare we say, presidential – ripped into the corrupt and the venal among us.

“We desire a South Africa of people as they interface with the state who will not see the state as a reservoir or a bank where they must go and steal public money,” said Ramaphosa.

But we all know the legacy of Mandela and Tambo now belongs to history.

It is the reality of Jacob Zuma’s dream we are living through at present, one from which we are still slowly waking, rubbing and blinking our startled eyes at the extent to which the country has been captured, sold off and just how badly it is limping along.

And all of this in the name of “economic transformation”, his disciples excusing it all through advancing the hollow narrative that bald nepotism, blatant theft and corruption are somehow a valid counterpoint to “white minority capital”.

This world we live in, where bottom feeders skim off what is not rightfully theirs, is reflected in the AG’s 2015/16 report even though Makwetu reported “a slight improvement in the audit results of national and provincial governments over the past three years”.

Makwetu, however, expressed concern with regard to the financial sustainability of the country’s state-owned entities where much of the haemorrhaging is taking place.

“The operations and audit outcomes of the state-owned entities were negatively affected by weaknesses in leadership and governance such as instability at board level, vacancies in key positions, inadequate consequence management and poor monitoring and oversight of financial and performance management and major procurement processes,” said Makwetu.

It was almost as if Ramaphosa had had an earlier look-in at the AG’s report on Tuesday saying that the country could not afford “Mickey Mouse people to manage affairs”.

The only way we could ever realise Mandela and Tambo’s dreams, said Ramaphosa, would be when those who lead or who are tasked with responsibilities do so “without stealing government money”.

“That is when we can do it effectively. We will do it when we act as people of integrity, as we act with great respect for the assets of the people, the assets of our state. We must get rid of mismanagement. We must get the best people to manage the affairs of our country.”

Transparency and accountability too was important, said Ramaphosa.

Here’s looking at you, Des.

The AG’s latest report covers a total of 484 auditees, which included 169 national and provincial departments and 315 public entities with a total budget of R1.2-trillion for the year under review. Let’s just write that one out to feel the full effect of the eye-watering enormity of the number:

Six auditees were responsible for just over 50% of the irregular expenditure, including the Passenger Rail Agency of South Africa, the KwaZulu-Natal and Mpumalanga departments of Health, the Road and Transport and Human Settlements departments in Gauteng and the Department of Water and Sanitation.

“As we have also reported previously, the Departments of Education, Health and Public Works that are responsible for almost 37% of the budget and for implementing key programmes to improve the health and welfare of citizens, continue to have the poorest outcomes – 40% of these departments received qualified or disclaimed audit opinions compared to 13% of other departments,” the AG noted.

Irregular expenditure, the AG found, amounted to R46.36-billion, an increase of almost 80% from the previous year.

“The main reason for the increase in irregular expenditure was the continued non-compliance with supply chain management legislation. Irregular expenditure represents expenditure incurred towards procurement of goods and services without following prescribed processes. The controls that should be put in place in the procurement process are derived from the constitutional requirements of supply chain management, as set out in section 217 of the Constitution,” said the AG.

The deviations were as a result of emergency sourcing, sole supplier arrangements, a failure to obtain competitive quotes and extensions to existing contracts (Are you listening, SASSA?).

“The technical and vocational education and training colleges (also in the higher education and training portfolio) received the poorest outcomes. Other auditees with poor outcomes were the museums in the Arts and Culture portfolio as a result of practical complexities (for example, costs versus benefits) in measuring the heritage assets under their control, and the auditees in the labour and transport portfolios.”

The AG noted that the majority of auditees had mechanisms in place for reporting and investigating transgressions or possible fraud and that in most cases investigations into allegations of unauthorised, irregular, and fruitless and wasteful expenditure were conducted.

“This effort has not had the desired impact of discouraging unauthorised, irregular, and fruitless and wasteful expenditure, and fraud and improper conduct. Insufficient steps were taken to recover, write off, approve or condone unauthorised, irregular, and fruitless and wasteful expenditure of the year under review and the previous year, as required by the PFMA. We have also continued to report to management indicators of possible fraud or improper conduct in the supply chain management processes for investigation; to little avail, as the cases continued to increase. In addition, although 80% or more of the cases are investigated, only 25% results in disciplinary action.”

Deputy President Ramaphosa’s call on Tuesday for a “clean South Africa” will remain, unfortunately, a pipe dream going on the AG’s comments with regard to lack of consequence related to official theft and fraud. And with the NPA and the Hawks caught in the crossfire of the palace politics of the ANC it is little wonder that the chancers – the real counter-revolutionaries – fear nothing and no one, not even the damage caused to the dreams of Mandela and Tambo. DM