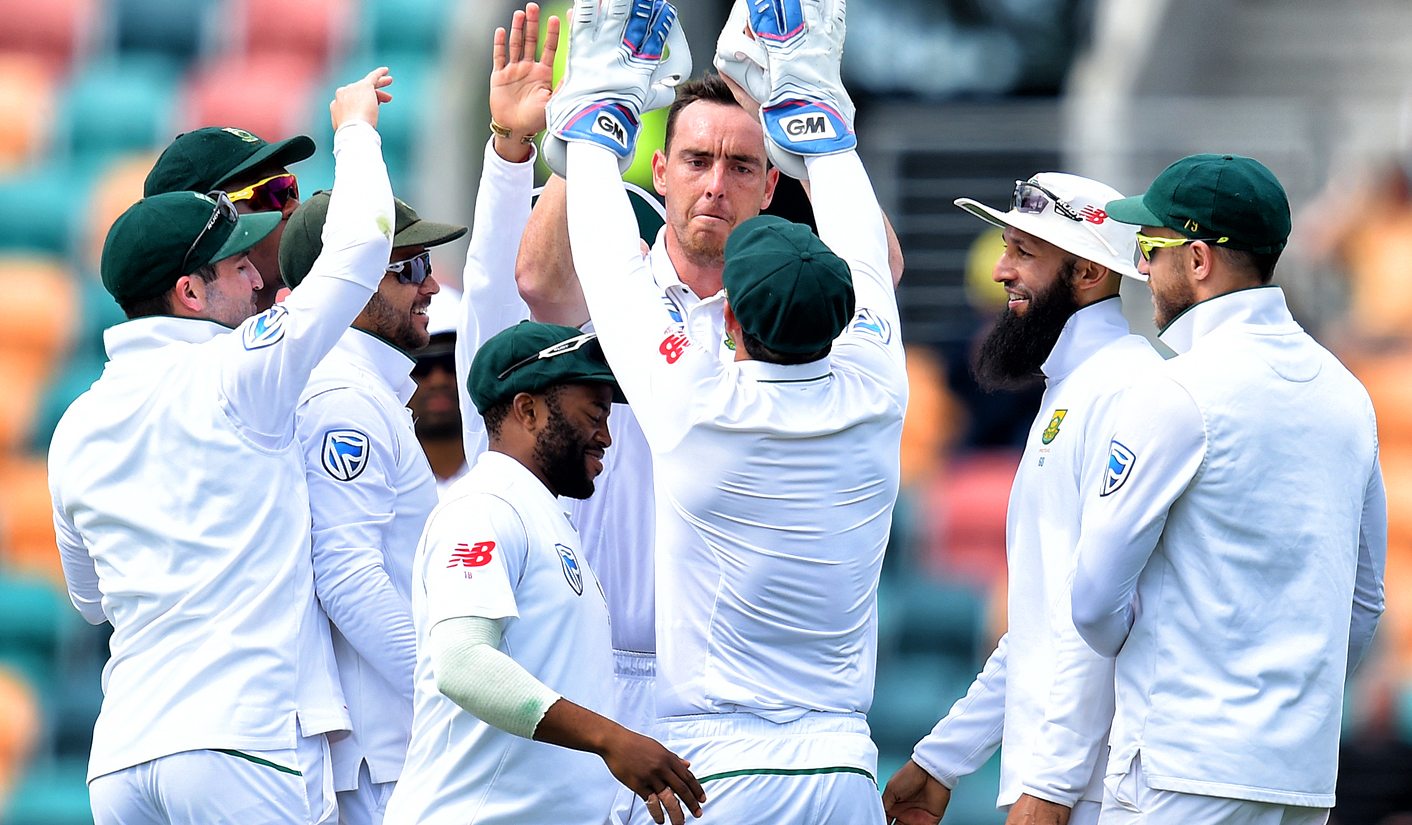 Not since the mighty West Indies of the 1980s has a team won three series in a row on Australian soil. The Aussies might be in disarray, but South Africa have been clinical and their victory in Hobart was about as ruthless as you’ll see them. BY ANTOINETTE MULLER.

South Africa wrapped up the  second Test against Australia inside four days (technically three if you consider it rained for a full day), winning by an innings and 80 runs to take an unassailable 0-2 series lead.

Exceptional bowling efforts by Vernon Philander (five for 21 in the first innings), Kyle Abbott (six for 77 in the second innings) and Kagiso Rabada (four for 34 in the second innings) set the tone for an emphatic victory. Temba  Bavuma (74 off 204) and Quinton de Kock (104 off 143) contributed with the bat as the Proteas made a green top look like a concrete court. Bowling Australia out for 85 and 161, with just four players in two innings managing to get into double figures, was a phenomenal effort and exactly the kind of follow-up that was expected after their comeback in Perth.

“I am embarrassed to be sitting here,” is what Aussie captain Steve Smith had to say of the capitulation.

Given a chance, South Africa could have probably won another match in the time that remained, such is the disarray Australia seem to find themselves in these days. There is more than a week to go before the third and final Test – a day-night affair – begins in Adelaide. While the hosts might be hitting the panic button several times over, South Africa can get their feet up and bask in what has been an incredible turnaround from their struggles that plagued them just a few months ago.

This is what we learned from the win.

The old cricket adage goes: when winning the toss, look up, look down and bat. If it’s cloudy, still bat. In the last decade and a half or so, that adage hasn’t always rung true. Some teams – like New Zealand, Pakistan and Sri Lanka – tend to bowl more often than they bat when winning the toss. For South Africa, it’s almost been 50-50. Interestingly, when looking at Tests from the start of 2006, South Africa has the second best win-loss ratio of any team winning the toss and fielding first (behind Australia). In hindsight, Faf du Plessis’ decision to bowl seems completely logical, but it’s not always so obvious when you’re out there in the middle.

Whatever South Africa are at the moment, Australia are the opposite

Not to take anything away from South Africa, they have been brutal and capitalised on their opposition’s flaws. This kind of ruthlessness has been a hallmark of the team for years and they deserve every accolade that comes their way as a result. Australia, though, have been complete rubbish, despite not having lost a Test series at home since the last time South Africa toured there. Transition periods happen to all squads and they can rip teams apart – just ask the Proteas. The Aussies, though, feel like they are permanently stuck in a revolving door.

If Rabada is this good now, imagine how good he’ll be once he’s angry

Kagiso Rabada is an exceptional bowler. He has maturity beyond his years and control beyond his speed. And he’s doing all of this on the back of a fairly meek and mild approach. When he demolished England at Centurion earlier this year, taking 13 wickets at Centurion, Rabada said he does not think he’d arrived yet. Ask him again and he’ll probably say the same. What’s most impressive about the 21-year old is that he goes about his business in a perfectly mild fashion. There’s no Dale Steyn crazy eyes, there’s no snarling or barking at batsmen and rarely is a nasty word uttered from his lips. This is perhaps the greatest testament of his ability, but you have to wonder just how much scarier he’d be if he got a bit pissed off every now and then?

When Stephen Cook eventually took over as opener after the effort to turn Stiaan van Zyl into a makeshift number one failed, it looked like South Africa’s top order woes had been solved. Over in Australia, though, he’s looked shaky.  Despite his duck in the first innings of the first Test, though, he has done what openers are expected to do: see off the new ball. South Africa will head into Adelaide with a series win already in the bag and while there might be temptation to try out new combos, there’s no need to get harsh just yet. Let Cook do what he is meant to do and address any concerns over the opening spot once everyone has gotten some first class cricket under their belts.

Hands up if you thought South Africa would suffer in this series, despite the struggles currently facing the Australian team. You won’t be alone. Considering how poor they were against England on home soil, the slightest whiff of a threat from Mitchell Starc and David Warner seemed enough to rip apart a team that many thought were completely disjointed. But as the marketing people will tell you: a Protea is the first flower to regenerate after a fire. It’s a terrible cliché, but this team does seem to have the ability to rally round when the world is against them. It’s that kind of chutzpah that was missing against England when they had their backsides handed to them in India. And it’s a big serving of humble pie for everyone else. DM