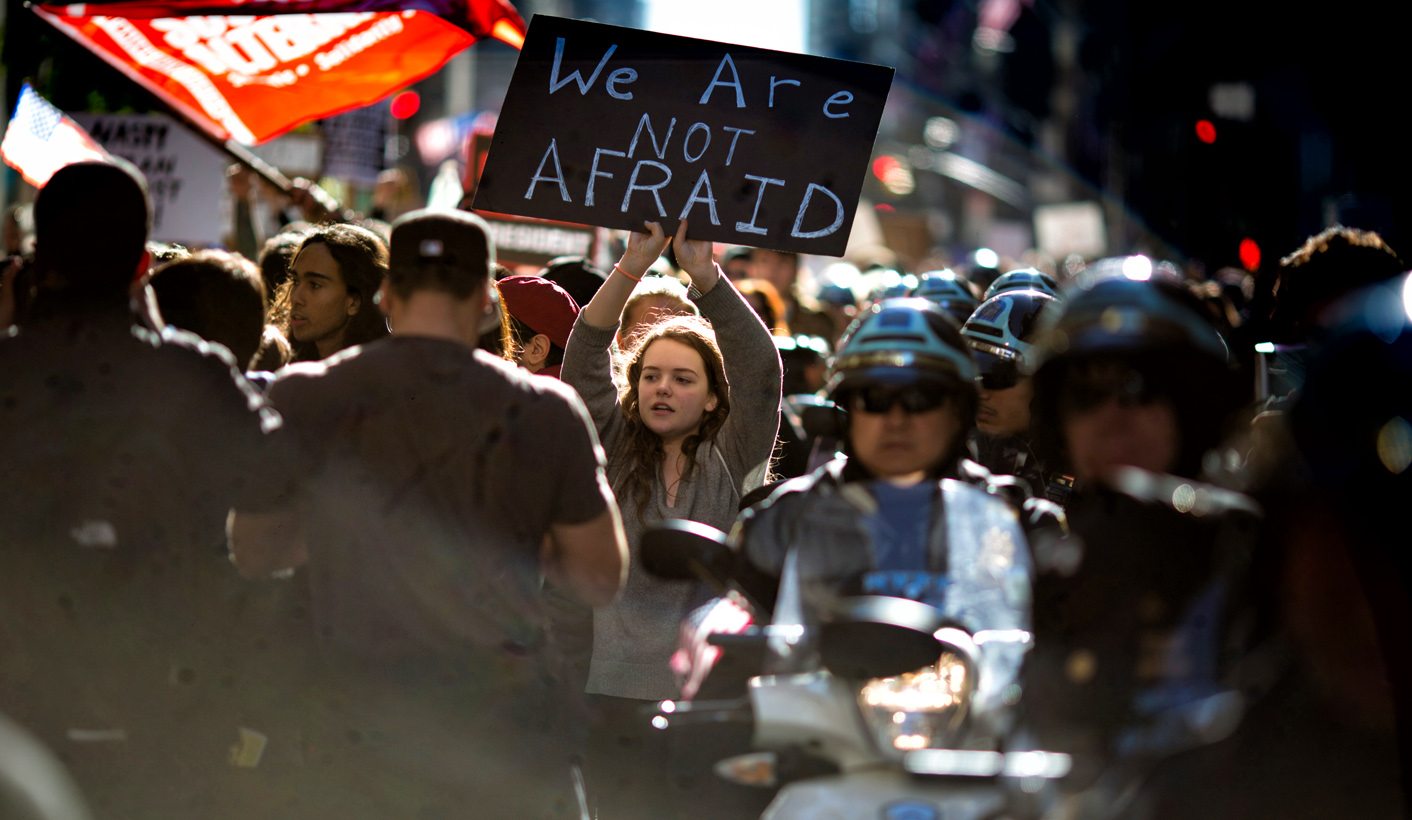 Look, maybe it won’t be that bad. Within a few days of being elected President of the United States, Donald Trump has already climbed down on major issues that were cornerstones of his election campaign. President Barack Obama is showing him the ropes and it now seems unlikely the president-elect will hand Hillary Clinton over to the NRA for target practice. Oprah is trying to talk the world off the ledge, tweeting a picture of Trump and Obama’s first meeting with the words, “Everyone take a deep breath! #HopeLives!” Maybe not. But there are some things to look forward to over the next four years – including legalised marijuana in several US states. By RANJENI MUNUSAMY.

Across the street from the grandiose 58-story Trump Tower on Fifth Avenue in midtown Manhattan, a man is struggling to take a selfie. Hordes of protesters are trying to push past the security barricades that now make it impossible to get close to the building that houses the president-elect of the United States and his family. Thousands of other people are trying to walk by, inconvenienced by the US Secret Service having to shut off one of the busiest parts of New York to protect the incoming president from ongoing protests.

Selfie guy is trying to take a picture of himself flipping off the menacing dark-glass tower – and obviously the main occupant. Because he is hemmed in by the crowd, he cannot get the entire tower in the picture. In the jostling, his phone keeps slipping. He is trying to take the picture with his left hand while his right hand is extended with his middle finger up. A policeman standing nearby approaches him. I think selfie guy is about to get walloped.

NYPD officer: “Why don’t you stand here? You’ll get a better angle.”

He points to a corner of the pavement where the barricade is jutting out, thus creating the only space not traversed by an annoyed human being.

He edges gingerly into the space, probably still expecting a thumping, and takes his picture.

NYPD officer: “Yeah. Sucks. What can you do?”

This is the brave new world of the 45th president of the United States, a country so polarised by the election campaign and so utterly stunned by the results that it is impossible to know what might happen next. The NYPD officer is probably among many people in the security establishment repulsed by the idea of having to serve under the new Commander-in-Chief because of what he represents and after all the toxic waste he emitted during the campaign.

Americans who do not support Trump and who now have to serve under him (many of them did not vote for Hillary Clinton) have a tough time ahead reconciling with the fact that he is their president. Over 68-million of the 129-million people who voted in the presidential election did not vote for Trump and they too have to contend with him as their leader for the next four years. The rest of us who did not have a say in the election also have to suck it up and brace for the political and economic repercussions.

But perhaps there will be things to look forward to under a Trump presidency as we mine through our own nuclear waste heap of domestic politics.

Millions of people around the world have balked at the idea of a Trump presidency and the implications for the planet. Yes, Trump is likely to be an unmitigated disaster but his administration will be bigger than any blockbuster Hollywood could have imagined. We all get to watch it unfold and history being recreated.

After 240 years, it is our honour to welcome America, “the land of the free and the home of the brave”, to join the rest of us here on skid row. DM