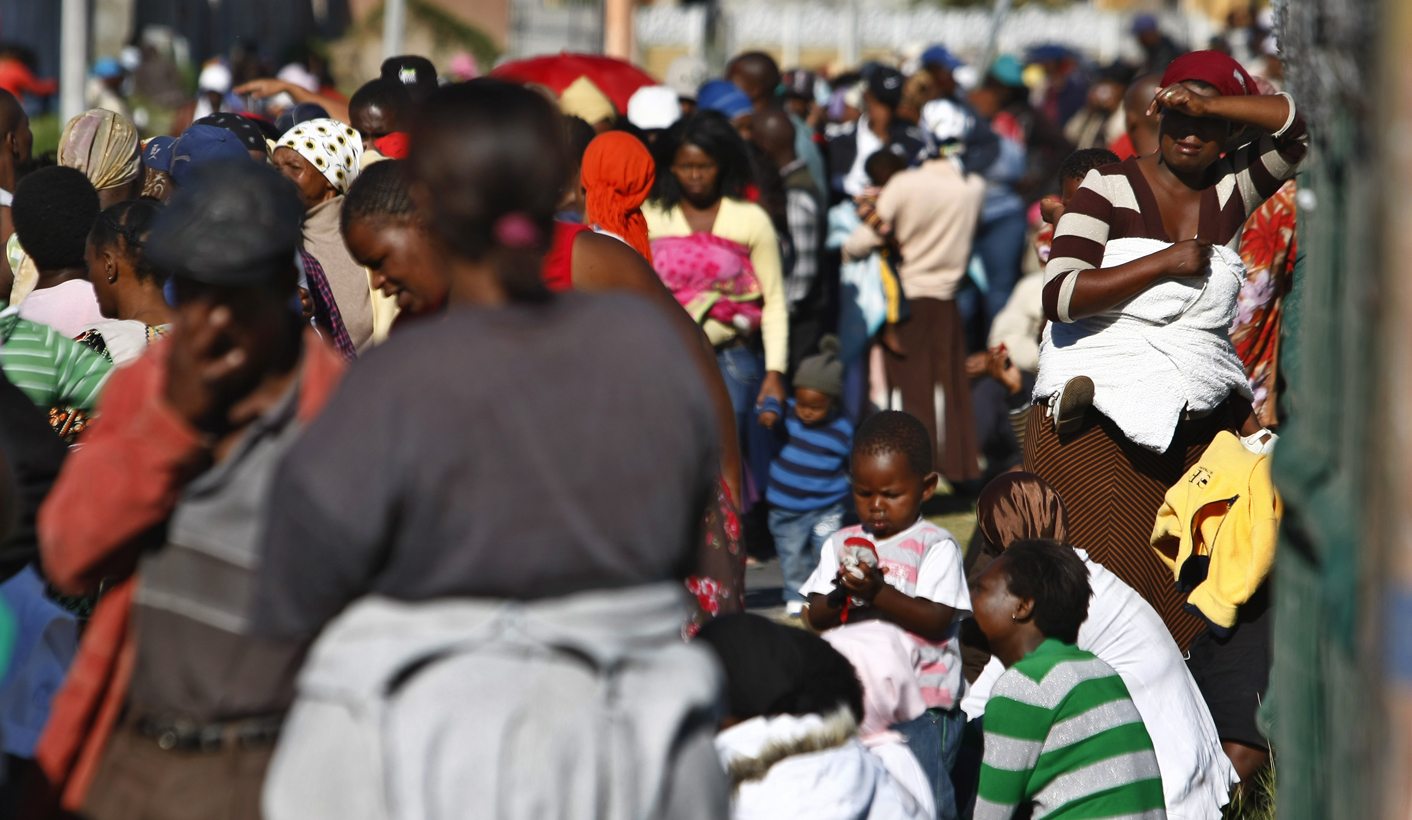 The South African Social Security Agency (SASSA) now only has five months to prepare itself for taking over the mammoth task of distributing social grants worth R10-billion a month to about 17-million vulnerable South Africans. Last month, after committee members warned of a possible impending disaster, SASSA officials vowed they would return on 16 November to present a detailed plan to Parliament’s Social Development Portfolio Committee. Problem is, SASSA’s top officials have jetted off to a conference in Panama instead, cancelling their presentation at the last minute. What do they know that we don’t? A look into the current service provider’s shareholders notes offers a glimpse into the reality past the April 1 switchover deadline. By MARIANNE THAMM.

While the World Social Security Forum of International Social Security Association currently taking place in Panama City from Monday until Thursday might very well offer SASSA’s top officials illuminating insights, the not-so-small matter of the agency’s preparedness to take over – from Net1 subsidiary, Cash Paymaster Services – the vital role of distributing some 17-million social grants to South Africans from April 1, 2017 is a much more pressing matter.

Any glitch in the system could literally mean life or death, food or starvation for many of the country’s most vulnerable citizens. Which is why members of Parliament’s portfolio committee for Social Development were looking forward to SASSA’s promised report back and detailed breakdown of various “workstreams” in preparation for the April 1, 2017 switchover.

However, members of the committee were informed by SMS on Monday that SASSA officials had cancelled their appearance before the committee as key officials were out of the country attending the conference in Panama.

DA Shadow Minister of Social Development, Lindy Wilson, on Monday said that the parliamentary committee which was tasked with performing oversight was “being kept in the dark. There are far too many questions left unanswered and by avoiding these, the department and SASSA are evading accountability.”

Wilson has said the party will write to the chairwoman of the committee, Rosemary Capa, to request that she urgently reschedule the appearance by SASSA.

“We have also learnt that SASSA has scheduled a meeting with ‘stakeholders’ on the institutionalisation of grants ‘to get their inputs’. Why are the Department and SASSA meeting stakeholders just five months away from implementation?” asked Wilson.

During a SASSA presentation to the committee on October 13, DA MP Bridget Masango asked whether SASSA intended extending the existing contract with Cash Paymaster Services (CPS), which had been ruled invalid by the Constitutional court in 2014. A division of CPS, Net1, had won the SASSA tender to distribute grant payments in 2012. The ConCourt ordered SASSA to reissue the tender by October 2015 as it had been “irregular”.

SASSA called for tenders but opted instead to extend the CPS contract until March 2017, offering that other tender bids “were non-responsive in mandatory administrative functionality”. In November 2015, SASSA reported to the Constitutional Court that the department would be ready to take over the payment of grants from CPS from April 1, 2017.

But it is unlikely that it will.

Net 1 is listed on the JSE and New York’s Nasdaq and what is revealing, however, are comments by Chairman and CEO, Serge Belamant, during a first quarter 2017 earnings call to shareholders on November 3 to discuss the company’s financial results.

(The full transcript of the meeting can be found on www.seekingalpha.com)

Speaking with regard to the company’s relationship with SASSA and how the company viewed its business “with the South African government going forward”, Belamant said that SASSA remained the most critical organ of the state in South Africa and that “the Minister of Social Development, Bathabile Dlamini, who also holds important position of Chair Person of the ANC’s Women’s League has made it clear that she, as well as the state, would like the SASSA system to be operated by SASSA.”

What the Women’s League has to do with it in this context is a bit puzzling, but we press on.

SASSA’s goal of gaining “total control over the management and distribution of grants” had, said Belamant, “been elusive until now due to the current conundrum created by the incompatibility between the banking and the social development, legal and regulatory frameworks… The road for SASSA to realise total independence will require many changes to the current system.”

It is the last sentence uttered on November 3, only 11 days ago, which indicates that Belamant might know something the rest of us suspect:

SASSA is nowhere near ready to take care of the rollout on its own.

“The card reissuance exercise of this scale would, in our experience, require a period of between 18 to 24 months from the date of the decision to do so,” Belamant informed shareholders.

SASSA cards are branded by MasterCard, he continued, and as such, formed part of the national payment system. These cards must be issued by a South African bank and conform to South African Reserve Bank and Payment Association of South Africa regulations.

“Each card is linked to a bank account, which is by definition also subject to the same regulations. To solve this impasse, SASSA could decide to reissue cards to beneficiaries that would only be branded SASSA and would therefore not be issued by any bank. It is possible for this card to technologically inter-operate with a national payment system, point of sale and ATM network, as they could and would support the common payment application.”

Belamont told shareholders that SASSA would also need to “insource a back-end card management system as well as a biometric one-to-many search engine to continue to eliminate duplicate registrations and reduce fraud.”

Net1’s solution and technology platform, he suggested, “can facilitate such a plan and as they are designed to provide this form of independence if and when required. More urgently, SASSA has asked us to propose a plan that would allow for all currently issued SASSA card(s) to continue to operate for a further 24 months after April 1, 2017.”

The massive exercise would require an update of all current cards with new MasterCards as well as Net 1 cryptographic key sets, and expiry date, as the current expiry date on millions of cards is March 31, 2017.

“If these updates are not performed by April 1, 2017, these cards would no longer be operational in terms of the EMV standard and banking regulations. Net 1 has designed a plan that would allow such updates to take place at SASSA offices, Net1 base points and Net1 ATM. Contingency plans have also been put in place to ensure that grant distribution will not be affected after April 1, 2017 or during the SASSA insourcing or transition period. Net1 continues to work with SASSA to achieve the objectives without any impact to beneficiaries and await SASSA’s decision to proceed according to the proposed plans.”

Sounds very much like a done deal from this side of the hill.

Also, the “transition period” referred to now appears to be only FIVE months. SASSA officials have not provided any concrete evidence to the contrary either to the portfolio committee or anyone else.

SASSA’s extension of the CPS/Net 1 tender, which has been declared unlawful by the Constitutional Court and has already been extended, could certainly be open to legal challenge.

Another interesting snippet in the report-back to shareholders is a remark by Net1 CFO Herman Kotze that the Department of Social Development had recently published its intention to provide “life cover” for elderly beneficiaries of social grants.

“DSD [Department of Social Development] estimates the cost of such insurance to be between 37 (rands) and 70 range per month. Although we do not know when such a scheme will be launched by SASSA, we would qualify for it on what the terms and conditions or the benefit would be.”

What this essentially means is that elderly grant recipients might find themselves short of between R37 and R70 a month as it is skimmed off for compulsory “life cover”.

Kotze said that the company was “confident that our Smart Life policies, which are designed to meet the needs of not only beneficiary, but also that of their families, will remain the preferred option for our customers. For comparison, I will also note that average price of our policies is around ZAR37.2, which is right at the lower end of the SASSA’s predicted estimated cost.”

He added that the company continued to “assume that our contract with SASSA remains in effect for the full year on the existing terms and conditions, a constant currency base of ZAR14.38 to the dollar and updated share count of 56-million shares and a tax rate of between 33% and 35%.”

Said Belamant, “We believe that at the end of the day, SASSA may not simply terminate our engagement for what’s planned on the 1st of April, it might take quite some time before this will actually happen, if at all.” DM

Photo: A South African woman carrying her baby rests against a fence with thousands of South Africans waiting in line outside the Guguletu Social Services office to register for a Social Relief of Distress Grant, Guguletu, Cape Town, South Africa 28 January 2009. EPA/NIC BOTHMA