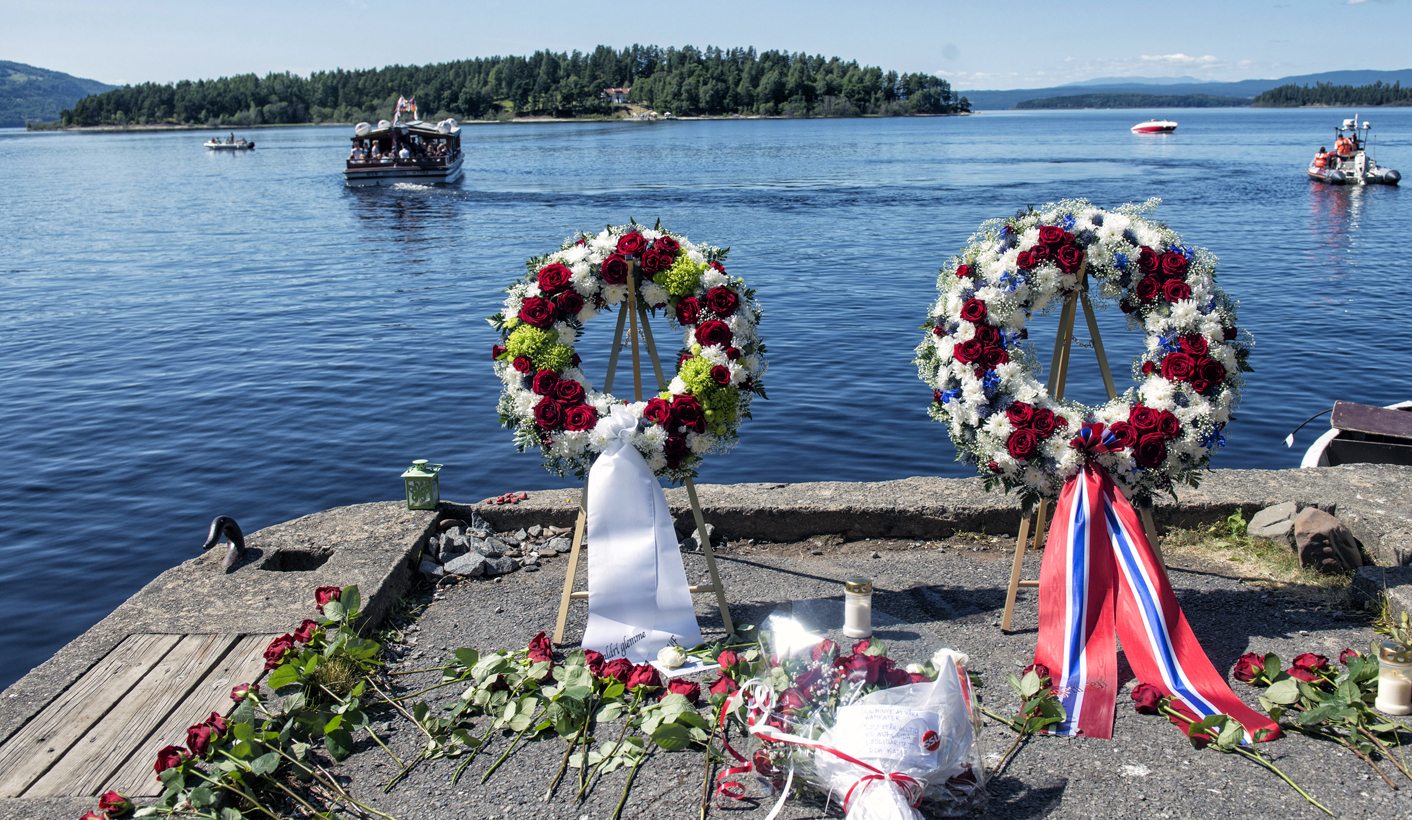 A Norwegian expert in anti-terrorism measures and countering radicalisation and extremism spoke to South African counterterrorism interests about her own country’s very own ‘9/11’ and what can be done to curb such atrocities. By PETER FABRICIUS.

Why are democratic, apparently tolerant Western societies producing radical extremists? This painful question is being asked by many countries, as they try to understand why disturbing numbers of their citizens head for Syria or Iraq to fight for Islamic State.

And sometimes return to conduct terrorist attacks against their homelands.

Norway, consistently rated by the UN Development Programme as having the highest standard of living in the world, is one of the countries grappling with this dilemma, as its deputy minister of foreign affairs Laila Bokhari said on a visit to South Africa recently.

Bokhari is a specialist in countering radicalisation and violent extremism and increasing the role of women in resolving conflicts.

She said about 90 Norwegians – a “disproportionate” number in a population of just over 5-million – had gone to Syria and Iraq to fight for Islamic State.

She was quick to point out in an interview though that radicalisation and violent extremism are not synonymous with Islamic State or Islamism more generally.

Norway knows this all too well, as on July 22, 2011, Anders Behring Breivik, a right-wing radical, violent extremist detonated a van bomb in the government precinct in Oslo, killing eight people and then, posing as a policeman, systematically shot dead 69 young members of the ruling Labour’s youth wing who had been participating in a summer camp on the nearby island of Utoya.

Bokhari was a member of the commission of inquiry set up to investigate “July 22”, which has become Norway’s 9/11.

It was because of this experience that she was particularly pleased to meet the South African government’s interdepartmental working group on counterterrorism in Pretoria, which included the departments of intelligence, international relations and others.

She wanted to share Norway’s experience that “extremism is not only radical Islamist” and so countering it must acknowledge other kinds. “You have right-wing extremism, you have criminal gangs involved in violent crime feeding into extremism, terrorism groups, etc.”

Bokhari said she talked to South African counterterrorism experts not only about what was happening in South Africa but elsewhere in Africa, including the activities of Boko Haram in Nigeria and al-Shabaab in Somalia, because Norway could learn from that.

South Africa was a “like-minded country” in believing that “counterterrorism must not go at the expense of human rights and the rule of law, which has been the Norwegian agenda as well.”

Both sides believed in countering terrorism through legal channels, she said, comparing the Breivik trial in 2012 – in which he received a 21-year jail sentence – and “an ongoing court case in South Africa”, an apparent reference to the trial of the twins, Brandon-Lee and Tony-Lee Thulsie, who have been charged with planning to travel to Syria to join Islamic State. Norway and South Africa could learn from each other’s experiences.

One of the dilemmas she discussed with the South African officials is “we want an open society but we see that a lot of the hate messages, the radicalisation, is happening on the internet. So how do we find measures which uphold our principles to an open society, while at the same time finding measures which make it possible to counter those messages?

“So how do you involve the population, say the youth or charismatic leaders, in finding counternarratives to some of the narratives that are being sold out there? That’s where we can all learn from each other.”

The commission she sat on examined practical matters such as whether the reaction of emergency services to the attack could have been faster.

“But there’s a deeper issue as well, in that, how could a society as seemingly harmonious as Norway create such a terrorist?

“And when we are up against other potential radical individuals, those are the questions we ask,” she said, adding that Norway was now developing a mentoring system in its prisons focusing on inmates, especially young ones, thought to be vulnerable to be recruited to violent extremism.

At some point the 90-odd Norwegians who became foreign fighters and survived would start to return.

“And again, how do we as society deal with the returnees? On a societal level? Through the court system? Prison system?”

Complicating Norway’s efforts is the fact that two types of radical extremism that it has experienced are mutually supportive. One of Breivik’s grievances was Muslim immigrants, and right-wing xenophobia like his in turn provokes Islamist radicalisation. “Yes, they play on each other. And they polarise, absolutely.” That’s why Norway stresses the need to look at both sides.

The same question that bothered Bokhari was asked by diplomats of several Western countries at a seminar on countering violent extremism, held at the Institute of Security Studies in Pretoria a few months ago. “How can societies as democratic and seemingly tolerant and harmonious as ours create so many terrorists (in these cases Islamist)?”

The seminar was addressed by counterviolent extremism expert, Professor Michele Grossman of VictoriaUniversity in Australia, another democratic country seemingly tolerant of cultural diversity, which has produced a surprising number of foreign fighters and has experienced terror attacks.

Grossman answered by suggesting that many Western societies were not as tolerant as they seemed. One of the key elements of the recruitment strategies of extremist groups like Islamic State was to align local concerns of Muslims in Western countries with global causes and issues.

For example, one might have “a group of young people from a Muslim background in a society that is pretty open and pretty democratic and pretty tolerant and has good policies, good social cohesion and support policies”.

But then a series of events makes them feel, in subtle and not so subtle ways, that they don’t belong. Their local community protests against their efforts to build a new mosque. Their plans to establish a community centre “are knocked back on the grounds of traffic concerns or changing the landscape of the neighbourhood. But where it’s pretty clear what’s at work.”

The children experience repeated bullying and racial and cultural and religious taunting at their local school. The parents get demoralised when they can’t find jobs even when they are more qualified than those who do.

When they added up all these experiences, their explanations would often be – “and it’s true in a number of cases – we are being discriminated against because we’re Muslim”.

“If you then have a recruiter who comes along and says; ‘Your personal experience is shared by hundreds of thousands of others living in diaspora across the West. They are asking you to sacrifice your identity, your heritage, to turn yourself into second-class citizens, to lose your honour, to lose your respect’.

“This is really the critical thing about some of the current narratives that are out there. They are not just against things, they are also for things. They are for the restoration of dignity, they are for a version of an authentic life with dignity and honour, in their terms. And they are for building a new society.”

It was not easy to counter this double appeal of violent extremism, combining push factors –the sense of being victimised locally– and pull factors, the desire, especially of youths, to be part of something bigger than themselves.

One way to counter it was to expose the dehumanising generalisations which radical Islamist propaganda make about grand and negative categories of people such as The West, the Non-Believers, Apostates and so on.

“In Australia what we found repeatedly is that while people may have various attitudes and beliefs towards cultural others, that they can hold those beliefs, some of which can be negative, but at the same time have positive relationships with individual members of those same groups.”

So one strategy was to build on the everyday contacts and individual relationships which people built with each other at the local level and ask them, if all Non-believers are as evil as you say, “how is it that you have such a terrific relationship with Alan over there?”.

It was also important to engage in open debate with these Muslims about all their concerns – including the foreign policy of their own governments which often bothered them. DM

Photo: Wreaths are placed at the sea side in Utvika, Norway, opposite ot the Utoya island (in background), 22 July 2013 as the country marks the second anniversary of the twin Oslo-Utoeya massacre by self-confessed killer Anders Behring Breivik. Breivik was sentenced to 21 years in prison in August 2012 for the bomb and shooting attacks in 2011 in Oslo and at a political youth camp near the capital. It was the worst acts of violence in Norway since World War II. EPA/ALEKSANDER ANDERSEN