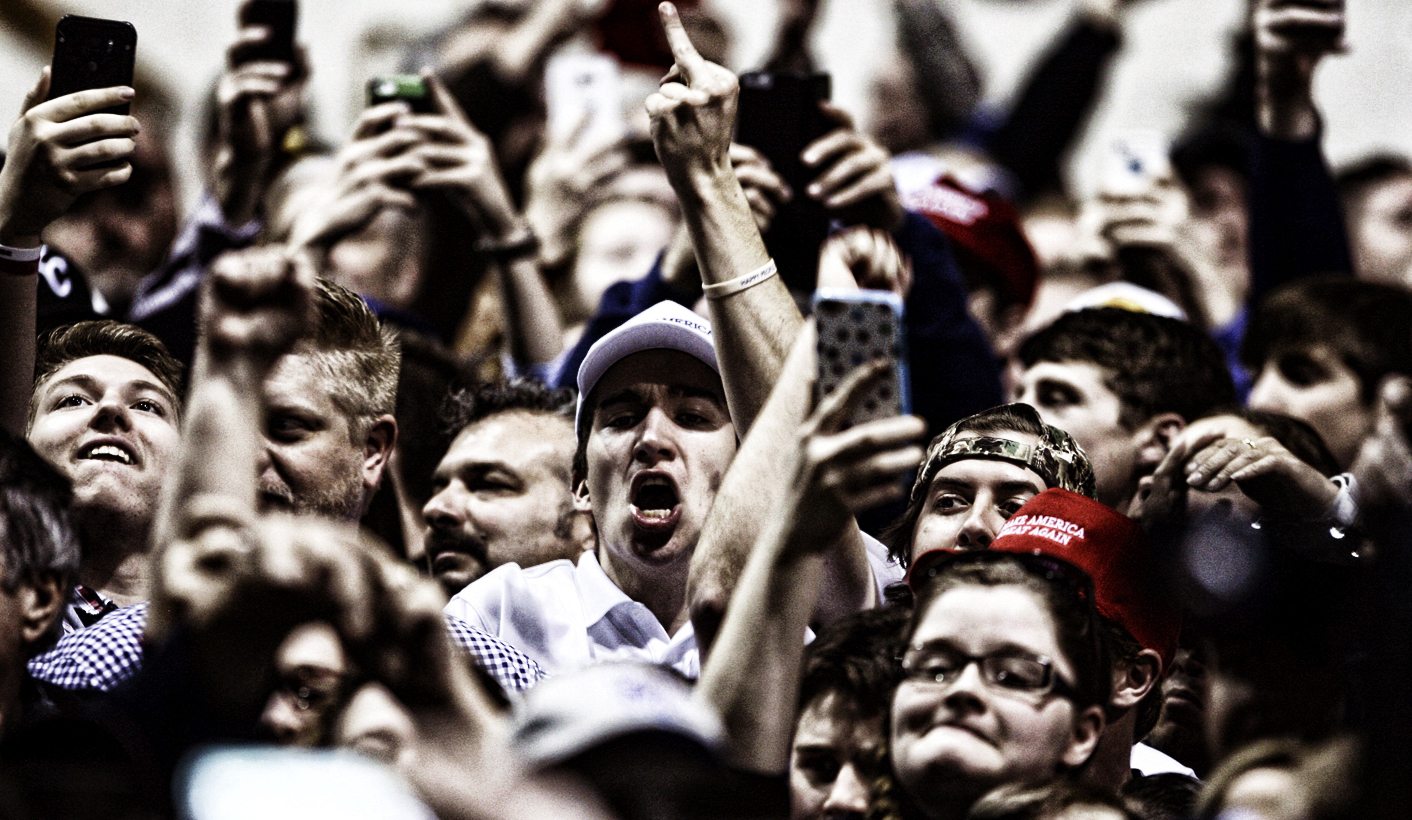 The networks and pundits can crunch the numbers all they want, there was nothing “reasonable” about what happened on 9 November 2016. So was the explanation something beyond reason? You betcha. One name for it was The Shadow, and it came to destroy and to save. By KEVIN BLOOM.

“The Commander-in-Chief answers him while chasing a fly/ Saying, ‘Death to all those who would whimper and cry’ / And, dropping a barbell, he points to the sky/ Saying, ‘The sun’s not yellow, it’s chicken’.”

The year was 1965, the American youth were gearing up for an unprecedented battle with the Establishment, and somewhere in a smoke-filled room a poet was channeling the future. Forty-two years later, in the film I’m Not There, two of this poet’s lines—the second and fourth line from the verse above—would be placed in the mouth of Lyndon B Johnson. We know now that the film got it wrong.

Which is fair enough. The prophecy, as manifested in the surrealist imagery that dropped into Bob Dylan’s brain from a source way beyond the rational, was not—as per the definition of prophecy—a comment on the present. No, when Dylan wrote “Tombstone Blues” two years into Johnson’s presidency, not even he knew which Commander-in-Chief he was referencing.

And neither did he know which Establishment.

“I wish I could give Brother Bill his great thrill/ I would set him in chains at the top of the hill/ Then send out for some pillars and Cecil B. DeMille/ He could die happily ever after.”

I mean, c’mon, right? How could Dylan have guessed in 1965 that “Brother Bill” Clinton’s fondest wish for his dotage would be to return to the gilded cage of the White House, building useless monuments and reading useless novels, while his wife fleeced the planet of its resources?

Even more to the point, how could he have guessed that 51 years later the Clintons would be the better of the two options? Because the triumphant Commander-in-Chief, the guy who ran on the anti-Establishment ticket, would be the guy shouting “pussy!” at the sun.

Yup, prophecy. So let’s surrender to the mystery and try to talk it through.

First, let us acknowledge that on 9 November 2016, we may have said goodbye to the world where “reason above all” was the default—the world where sanity and good sense prevailed, where psychosis existed only on the fringes. As of now, there is a very real possibility that the Age of Enlightenment, the era that ushered in science and democracy and rationalism, will dissolve with President Donald J Trump’s reversal of the course set by the Paris Agreement on climate change, or his building of the Mexican wall, or his dicking around with nuclear warhead codes.

“Well, John the Baptist, after torturing a thief/ Looks up at his hero, the Commander-in-Chief/ Saying, ‘Tell me, great hero, but please make it brief/ Is there a hole for me to get sick in?’”

President Trump could do one or all of these things—to think otherwise is to be stuck in a reality prior to the laughable announcement of his candidacy—and one or all of these things could upend civilization as we know it. Sure, we’ve survived Hitler and Stalin and a host of other apocalyptic nut-jobs, but not only were their capacities for global destruction much weaker, it was also a fact that none of them were leaders of a nation that (regardless of its hypocrisies) had been the moral ballast of the planet.

“Now, the medicine man comes and he shuffles inside/ He walks with a swagger and he says to the bride/ ‘Stop all this weeping, swallow your pride/ You will not die, it’s not poison!’”

I, for one, am with Dylan. And I am hereby acknowledging the follow-on point in this argument, which is that as a species we are lost, that we know neither what is happening nor what to do. After 400 years and change, our faith in Reason has led us here—to the edge of the abyss, where the mind refuses to go, where all we can draw is a blank. Medicine man? Bring him on. What, pray tell, is he offering?

If this is not the forum to quote the Rishis or the Kabbalists or the Sufis, maybe we can move on from Dylan to Carl Jung. “Happiness and contentment, equability of soul and meaningfulness of life—these can be experienced only by the individual and not by a State, which, on the one hand, is nothing but a convention of independent individuals and, on the other, continually threatens to paralyze and suppress the individual.”

On 9 November 2016, the collective unconscious became conscious. Which is to say, the collective shadow came into full and butt-ugly focus. Jung’s point in The Undiscovered Self was that it was inevitable—the shadow, not merely a hideous thing but a dynamo of incredible power, was his most effective harbinger of change.

As for the individual, so for the State, and so for the entire human collective: if the shadow wasn’t welcomed in poetry and art and visions (as per Dylan) it would gatecrash the party in fears and projections and nightmares (as per you-know-who). Either way, it would come. On the other side would be a more realised Self.

And so back to the clairvoyance of the bard.

“The geometry of innocence, flesh on the bone/ Causes Galileo’s math book to get thrown/ At Delilah, who’s sitting worthlessly alone/ But the tears on her cheeks are from laughter.” DM