No confidence: ANC wins the vote, but Zuma suffers in battle 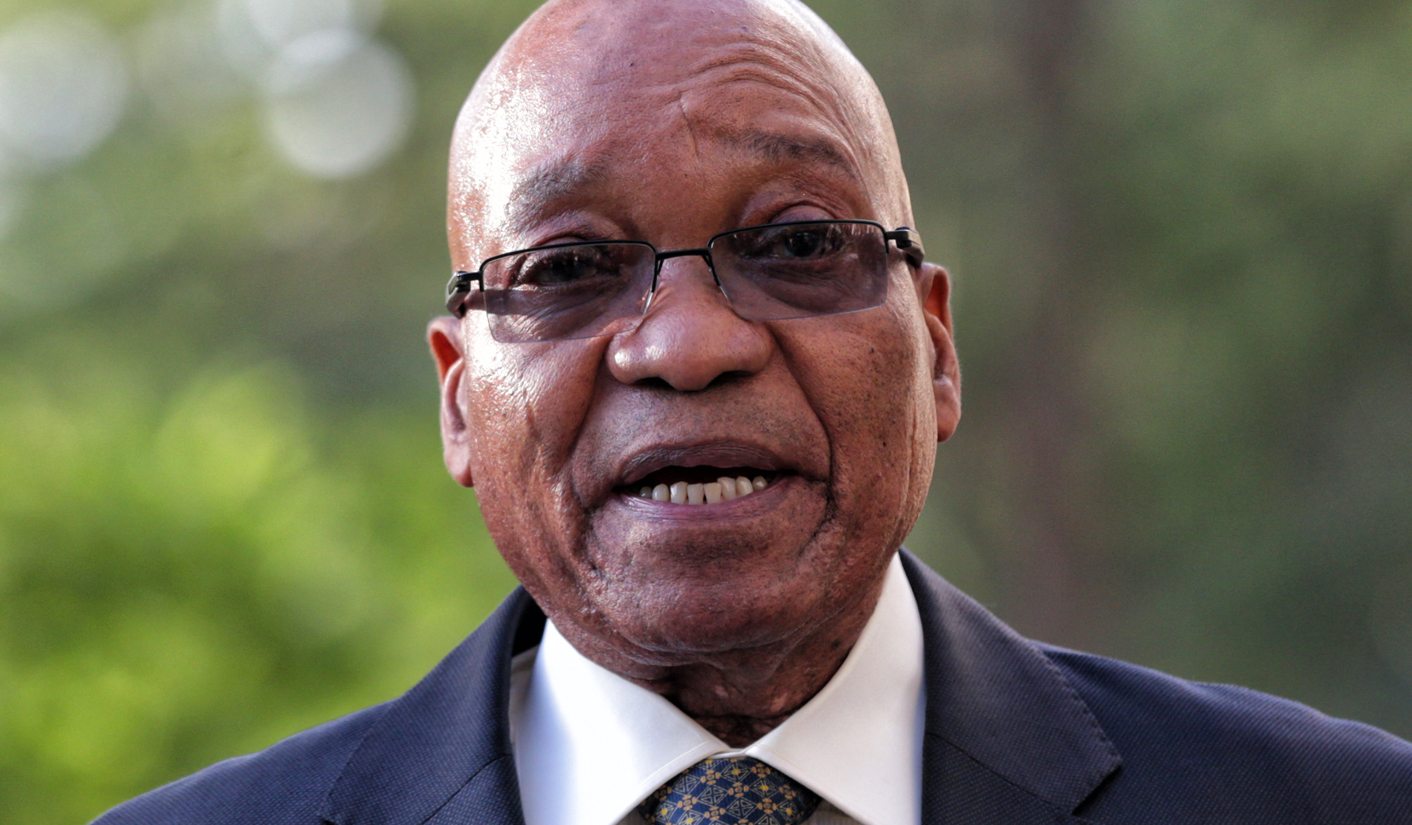 ANC MPs on Thursday defeated the DA’s motion for a no confidence vote on President Jacob Zuma and did their best to defend the party and its president. The opposition’s motion might have failed, but Zuma was hammered in a dramatic day in Parliament. By GREG NICOLSON.

The DA’s motion of no confidence was always bound to fail, but that wasn’t the point, as the party pointed out on Thursday evening. The opposition may have held slim hope that the National Assembly would vote on a secret ballot, allowing the ever-growing number of ANC members questioning Zuma’s leadership to express their disappointment anonymously, but Thursday was ostensibly about naming and shaming. Moving the name from Zuma to the ANC. Shaming the party for supporting Zuma’s leadership after the State of Capture report, after Nkandla, after, after.

“We had sincerely hoped that the ANC would do the right thing, vote with their consciences and choose South Africa over Jacob Zuma. But we knew that was unlikely. If they would not support us in ending the corruption of Jacob Zuma, as they could have done, then it was important for the public to see for themselves how far the ANC has fallen,” said DA leader Mmusi Maimane after the ANC majority rejected the motion of no confidence.

The plan was to shame the party, the question is, did it work?

The debate began and ended in contention. Before anyone put their case forward, the EFF’s Floyd Shivambu and ANC’s Jackson Mthembu battled over whether the vote should be held in secret. Deputy Speaker Lechesa Tsenoli, who has more control over the House than Speaker Baleka Mbete and was in charge on Thursday, struggled to maintain order. The ANC won the day, but Zuma was hammered by all but ANC speakers.

He named ANC leaders who have spoken out in factional battles, the same members sitting in the House – Mthembu, Mathole Motshekga, Aaron Motsoaledi, Thulas Nxesi.

Said Maimane, under constant heckling from the ANC benches:

“Together we can bring an end to this destructive chapter of our history. Together we can fulfil the role of this house which is to hold the executive to account.

Minister of Water and Sanitation Nomvula Mokonyane was the ANC’s first defence. Also amid heckling, now from the opposition, she said, “The motion we are here to debate today is really a phantom to masquerade the essence and nature of opposition politics in our country and their quest to gain power by other means other than the ballot box using a black face to protect the interests of the white minority.”

During her speech ANC members rose to complain about letters the DA sent them urging support for its motion. Mokonyane again called Maimane a black face for a white party and suggested that state capture is really about dominant foreign-owned companies benefiting from South Africa that are trying to defend and undermine the government’s transformation efforts. She quoted former president Nelson Mandela on how not everyone is a saint in the short term, but what matters are the efforts made over the long term.

After Mokonyane, opposition members attacked Zuma and the ANC. The EFF’s Floyd Shivambu listed dictators across the continent and said Zuma should be included in the list as he’s waiting to call South Africa “Guptaland”. The ANC should have acted against the president, but many in the House could not act in such a sitting, he said, pointing to ministers Mosebenzi Zwane and Des van Rooyen, who were listed in the Public Protector’s state capture report. “He’s going to be going to prison. We’re going to bring Jacob Zuma down,” Shivambu said.

IFP leader Mangosuthu Buthelezi said, “The cry for the president to step down is echoing from all corners of the country. It’s on the lips of stalwarts of the ANC, spoken from the heart of many women who pledged their lives to liberate the country.” He asked whether the ANC would listen, and whether it would fall after warnings and signals from former President Thabo Mbeki, the Public Protector, the economy, and the ballot box. “Thus a movement that has stood for 104 years is crumbling and is taking South Africa with it. All this for one man.”

UDM leader Bantu Holomisa also hit out at the president and ANC. “The ruling clique on this side of the House,” he said, gesturing towards the ANC, “is behaving like wolves screaming in unison to defend one of theirs at the expense of the country. They are showing South Africans the middle finger. Look at them – they are jumping from their chairs like popcorns.” He called the president “monumentally flawed”.

Cope’s Mosiuoa Lekota said Zuma had failed to uphold the Constitution and MPs had taken an oath of office to hold the president accountable. Agang SA’s Andries Tlouamma was scathing, calling Zuma a “false messiah who has become a corrupt monster”:

“His presidency reflects general malaise where the Guptas are like cannibals to our state-owned enterprises. This president must succumb to the consequences to his own greed and reckless appetite of material. For Zuma to continue as president it would be like taking poachers to guard rhinos.”

The ANC chose Home Affairs Minister Malusi Gigaba to sweep the debate. “The truth is that there’s a bitter struggle in South Africa between the former oppressors and those whom they oppressed for the right and power to determine the political direction of this country as well as the ownership of its economic resources,” he said. He blamed the DA for using the state capture report to subvert democracy to the benefit of whites and foreigners. “At best this motion is about political point-scoring, but at worst it is characteristic of the abhorrent ploys in the global empire and their local political hoodlums under guises of good governance and defending the Constitution and the rule of law to steal political power in order to defend, protect and advance their exclusive economic interest,” said Gigaba.

He also mentioned a CIA strategy in Iran.

The DA’s James Selfe closed the debate for the opposition. He noted the ANC’s contribution to South Africa but said the party had changed and Thursday’s debate was about Zuma. “That was a proud history. That was a noble history, but that was then. Now we see a different ANC who simply can’t do the right thing. It is an ANC that appoints incompetent and compliant people to key positions. It is an ANC that covers up corruption on a colossal scale. It is an ANC which protected a president who misappropriated state resources to improve his private residence,” said Selfe. Dismissing Gigaba’s points as fantasy, Selfe appealed to ANC MPs, “Whatever his contribution, President Zuma is not the right person to lead South Africa now.”

After further debate on whether the vote should be secret, Tsenoli noted a legal precedent and allowed the vote on the motion to go ahead. The DA’s proposition was rejected, with 214 MPs voting against, 126 in favour, one abstention and 57 absent.

The DA always aimed to make the point that Maimane noted on Thursday after the vote:

“Every ANC member of the National Assembly had a simple choice today: choose Jacob Zuma, or choose the future of South Africa.”

His party has brought repeated no confidence motions and it’s up to the public to decide whether the ANC as a party endorses Zuma, and other implicated members of his scandal-plagued government, or view the DA’s attempt as opportunistic and a failure to understand dominant political processes in the country. The DA, however, had one win on Thursday: the president was fiercely criticised by all but the ANC. DM

Photo: South African President Jacob Zuma speaks during a joint press conference with Russian President Vladimir Putin (not pictured) after their meeting at the Bocharov Ruchei residence in the Black Sea resort of Sochi, Krasnodar region, Russia, 16 May 2013. Jacob Zuma is on a working visit in Russia. EPA/MAXIM SHIPENKOV