Zimbabwe: ‘The endgame is nearer than it has ever been’ – Morgan Tsvangirai 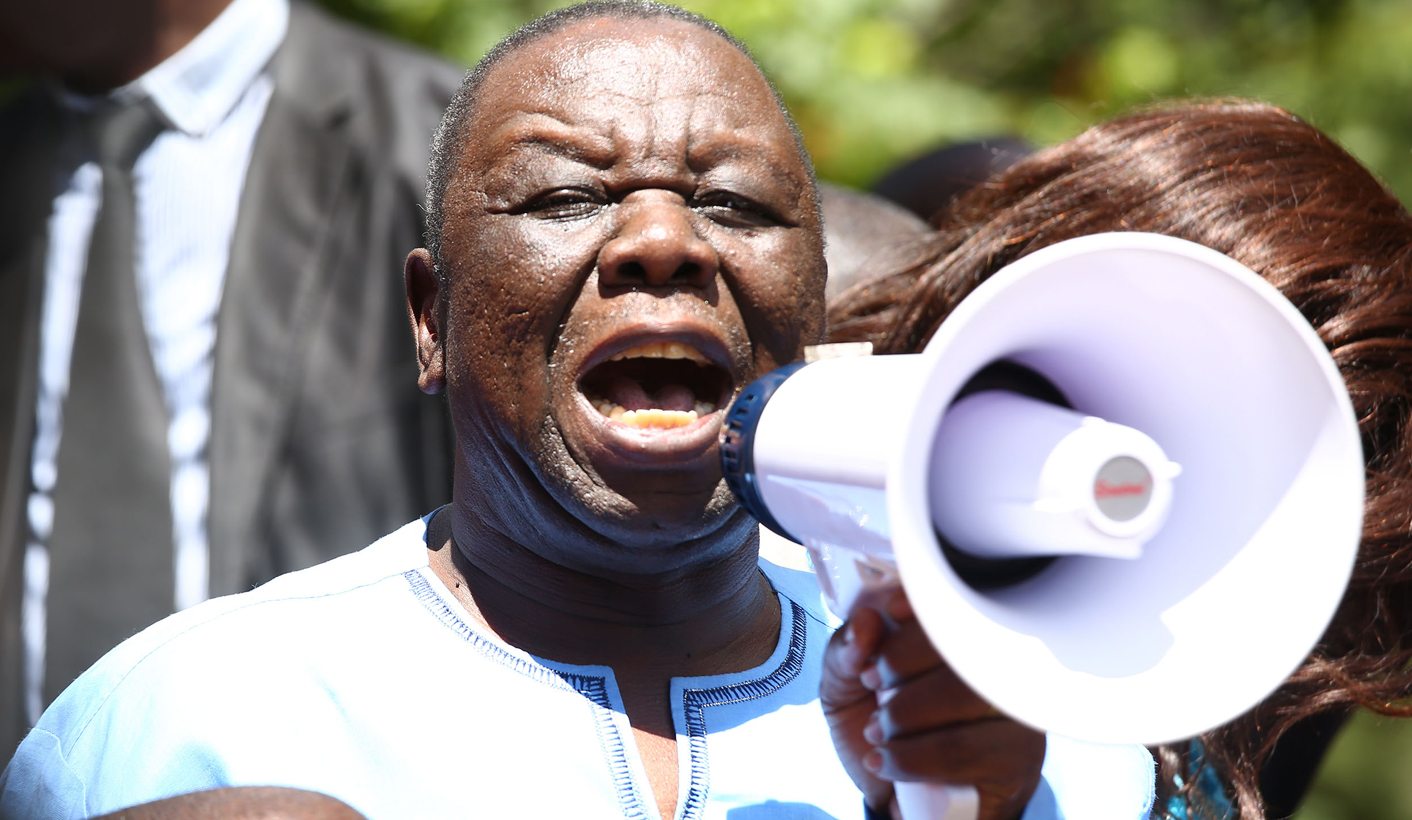 In an in-depth interview, an energised Morgan Tsvangirai speaks to SIMON ALLISON about the fragmentation of the Zimbabwean state, a dignified exit for President Robert Mugabe, and why the youth of today have a thing or two to learn from him.

It’s a grey, two-storey mansion in the heart of one of Harare’s most exclusive suburbs, complete with imposing pillars, sweeping driveway, and a putting green. From here, gazing out onto the manicured lawns that are beginning to show just a hint of neglect, Tsvangirai is planning for Zimbabwe’s post-Mugabe future.

The house perfectly encapsulates the contradictions that haunt Tsvangirai himself. It was bought, at vast expense, by the government when Tsvangirai was Prime Minister during the Government of National Unity. He got to keep the place when that experiment ended in 2013, even though his party had been turfed out of power in yet another dodgy Zimbabwean election.

Is the house a fair reward for the blood, sweat and tears that Tsvangirai has dedicated to reforming Zimbabwe? Is it a bricks-and-mortar bribe, designed by Zanu-PF to compromise him? Can a man who lives in a mansion ever really claim to speak for the people? Is Tsvangirai leading the fight against the system, or is he now part of the system, the necessary yin to Robert Mugabe’s yang? Have his recent years of luxury and power made him soft?

For the last few years, these questions have been loud, but largely academic. Still bruised from the hammering they received in 2013, Zimbabwe’s opposition – powerless and bitterly divided – sank into a torpor. From the outside, at least, Tsvangirai appeared to be spending more time on golf than politics, and presided over a movement that was offering rapidly diminishing returns.

And then came Pastor Evan Mawarire and his inspired #ThisFlag movement, which not only terrified the regime but lit a rocket under all forms of opposition to it. Social movements and trade unions discovered a new energy, masterminding demonstrations and protests all over the country. So too did political parties, joined now by a heavyweight newcomer: Zimbabwe People First, set up by Joyce Mujuru, formerly Mugabe’s right-hand-woman, and several other high-profile defectors from the ruling party.

But no one has been more energised than Morgan Tsvangirai. Brushing off his struggles with colon cancer, the Movement for Democratic Change-T leader can smell blood, and there is no way that he is going to miss the hunt. But more than that: he is enjoying himself. These are the moments that old fighters live for.

“The endgame, to me, is nearer than it has ever been,” he tells me. We’re in his home office. A framed photograph of Nelson Mandela hangs on the wall behind his desk – a statement of intent, one suspects.

“The state is fragmented. Zanu-PF is fragmented. The centre is not holding. The opposition and social movements have been emboldened by the actions they have taken; they are in a more aggressive position, which is good. There is also international isolation and the continued demand by the international community to put conditions on the Mugabe government to be rescued from their own economic situation. It’s a fantastic combination. There’s a convergence.”

For Tsvangirai, there is opportunity in this convergence, both politically and personally. Politically, he senses that Mugabe’s days are numbered. Personally, there is no doubt that he wants to be the one to lead that fight – and the new, Mugabe-less country.

“The elections in 2018 have to deliver change, or there is nothing left for the people. I don’t believe that any authoritarian rule has a permanence against the will of the people. Yes, the old man may appear as invincible, but you must understand that the democratic struggle has chipped in a slow but consistent way at his control,” he says.

There was a sense, earlier this year, as unaffiliated resistance movements like #ThisFlag and Tajamuka and the National Vendors’ Union drove the national agenda, that Tsvangirai was losing his crown as opponent-in-chief. Popular dissatisfaction was not just directed at Zanu-PF, but at all political parties that had tried and failed to deliver real change.

Tsvangirai claims he wasn’t worried. Although he welcomes the disruptors, he says that only organised opposition has the national infrastructure to take on the Zanu-PF machine, and MDC-T’s is by far the best of the bunch. As one civil society activists confided: “Tsvangirai is the only opposition politician in the country who can decide to hold a rally today, and fill a stadium by tomorrow.”

That doesn’t mean that the new social movements are not important, just that they are not sufficient.

“I don’t feel any one social movement can cause change, unless you want a revolution,” says Tsvangirai. He laughs as he explains that the youth see him and Mugabe as part of the same generation (Tsvangirai is 64, Mugabe is 92), that they think that “these are old people who don’t know what the young people are demanding”. He says this is a good sentiment, one that he encourages, because new ideas and fresh energies are exactly what is needed. But the youth must also realise that they can’t do it all alone. “They also know that without the MDC they have no basis to achieve the objective, without the structures on the ground.”

He is also not sure that the youth have the requisite backbone, that they are prepared to sacrifice for the cause. Tsvangirai, of course, has sacrificed plenty: he has been imprisoned and tortured, while his wife was killed in a suspicious car accident.

“Of course #ThisFlag has caught up the imagination of the young digital generation, but unfortunately it’s a bubble that has burst, because the champions have disappeared, they don’t want to take the risk. Some of us have been on the forefront, and we have taken the risk against this regime, and these young people do not want to take the risk, and it’s very disappointing.”

This is a none-too-subtle dig at Pastor Mawarire, who fled Zimbabwe shortly after being released from prison, and is currently in the United States.

So what, exactly, does Zimbabwe’s post-Mugabe future look like, according to Tsvangirai? In the short term, the country must be governed by some kind of technocratic transitional authority, to which both police and military must be subordinate. In the medium term, there will be free and fair elections, with a democratically-elected government to follow. And in the long-term – well, no one’s quite sure, but it is definitely going to be an improvement.

“There’s no way we can go beyond where we have gone, we are at rock bottom. The only option available to us is to rise. That’s my optimistic assessment. But, of course, we have to do so in the right manner. And we can do it in a short period of time.”

Even if it means letting Mugabe off the hook.

“I’ve always said that the first thing we must agree is that Mugabe must retire. The danger of having unceremonious removal of Mugabe will create a chaos scenario. We must find a way of persuading him, if he can be persuaded to exit with a dignified exit. Not that I support him, but the first stage is to get him out of the way.”

Tsvangirai doesn’t specify what the second stage is, but it’s not hard to read between the lines. With Mugabe out of the way, the stage is clear for Tsvangirai finally to obtain the prize that has been denied him for so long: the presidency.

We don’t tend to approve of ambition in our freedom fighters. They should be selfless, always ready to put the party first, and the country before that. They should be like Nelson Mandela, who always appeared to be weighed down by the presidency. But Tsvangirai, in his big house, with his big dreams, wears his ambition on his sleeve.

That may not be a bad thing. Like it or not, Zimbabwe’s resistance needs the veteran opposition leader and his political machine. And if that means that Tsvangirai eventually gets to trade in his grace-and-favour mansion for the presidential suite in State House, few would begrudge him the honour. Besides, whatever happens, he’ll be an upgrade on the current occupant. DM

Photo: Leader of the opposition party Movement for Democratic Change (MDC-T), Morgan Tsvangirai, speaks to supporters during a protest against poverty and corruption, in Harare, Zimbabwe, 14 April 2016. EPA/AARON UFUMELI