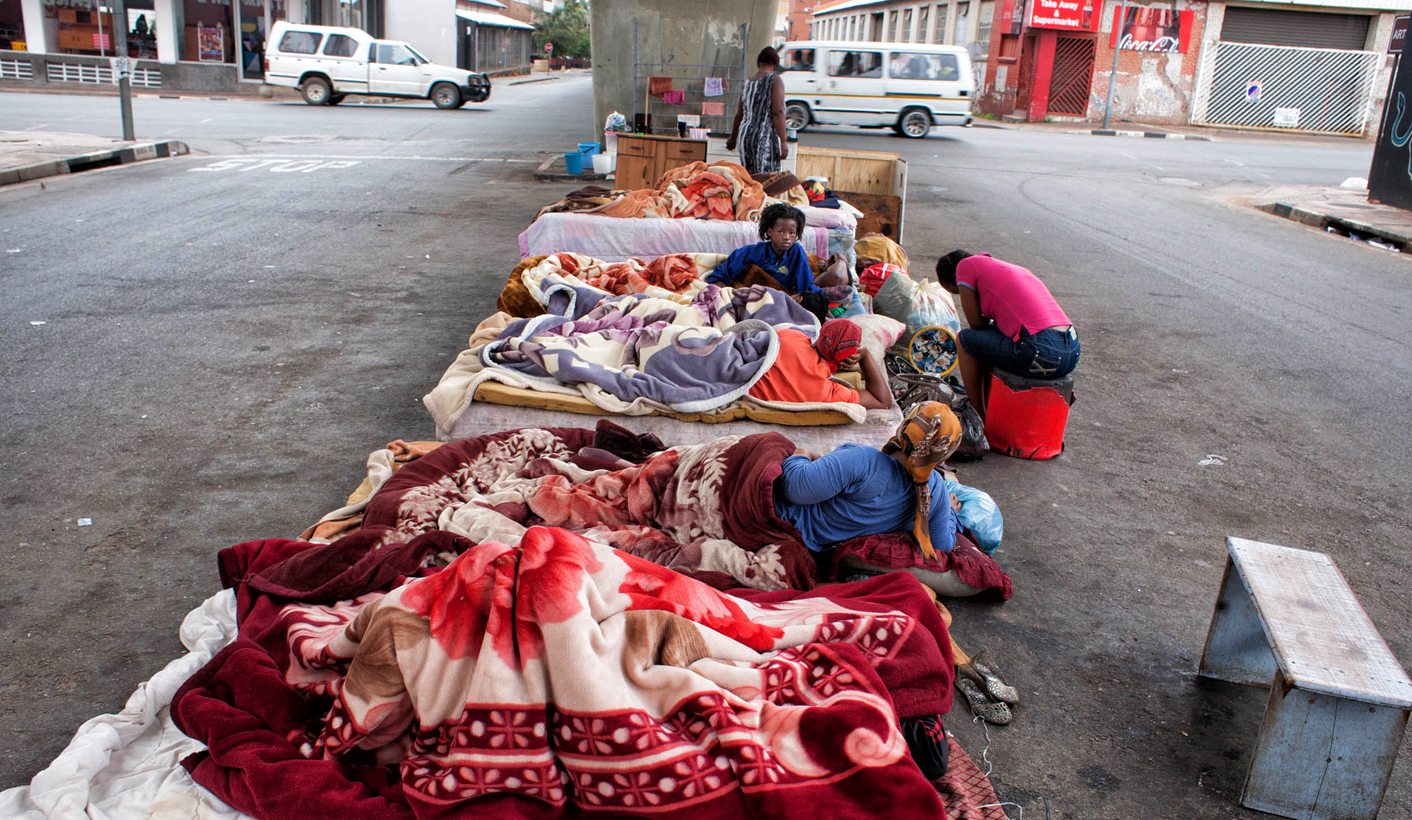 On Tuesday morning, the Institute for Justice and Reconciliation launched its most recent South African Reconciliation Barometer briefing paper – one of the country’s few measures of South Africans’ subjective, lived experience of social cohesion and race relations. What’s important here is, perhaps, not what the report finds, but the acute need for deeper understanding of the issues it raises. By MARELISE VAN DER MERWE.

“When we talk about racial progress or race relations, it’s all nonsense,” comedian Chris Rock told New York magazine in an interview. “There are no race relations. White people were crazy. Now they’re not as crazy. To say that black people have made progress would be to say they deserve what happened to them before.”

Talking to Elnari Potgieter, author of the fourth SARB briefing paper, one is reminded of Rock’s words. The Institute for Justice and Reconciliation (IJR) was launched in the aftermath of the Truth and Reconciliation Commission (TRC) and describes one of its main objectives as “help(ing) to build fair, democratic and inclusive societies in Africa through carefully selected engagements and intervention”.

Two decades into democratic South Africa, the political landscape has developed considerably and so have the needs of citizens. Post-honeymoon, it’s been argued that the TRC was a starting point rather than bringing closure; it’s also true that as service delivery and #MustFall protests increasingly dominate headlines, there’s a growing understanding that reconciliation cannot occur without justice.

It’s in this uncertain climate that EFF leader Julius Malema – never one to miss a stirring opportunity – proclaimed that it was “unavoidable” and “inevitable” to take back land “no matter how”. “We’re the rightful owners [of the land]. Our peace was disturbed by the white man’s arrival here,” he said. “We are not calling for the slaughtering of white people… at least for now.”

The statement made waves, as doubtless Malema intended it to. But are South Africans angrier? Are they gatvol? Are the blinkers coming off? Or are they speaking up on what’s always been there?

An interesting question, says Potgieter. Anger and reconciliation are not – she emphasises – mutually exclusive. It’s more important, she argues, to have “quality discussions” around the issues that matter to people.

Which means, loosely, that things need to get messy in order to improve. But is that a bad thing? Depends on your perspective. If you want to maintain the status quo, you’re probably going to have some trouble adjusting. If you’ve been drawing the short straw, however, you’ll find it high time.

The latest SARB briefing paper delves a little more deeply into the issue of lingering inequality and its impact on social cohesion. In the first set of results released from the 2015 survey, it was reported that more than two-thirds of respondents felt that they had little or no trust in South Africans from racial groups other than their own, and a majority of respondents identified the gap between rich and poor as the most divisive aspect of South African society.

Inequality, in other words, is a big deal, and it’s costing all of us.

A key point in healing South Africa is going beyond integration, believes Potgieter. “Social integration requires less than social cohesion,” she explains. “And cohesion is a much looser term than reconciliation. It’s a much bigger process. It requires quality conversation. What’s important to mention here is that people repeatedly identify that socio-economic divisions are the biggest reason why we are not achieving our reconciliation goals.”

Reconciliation as a concept has lost much of its original appeal, she says, because so many of the things that needed to be unpacked were not unpacked.

The survey emphasises this. To date, according to the latest SARB results, the lives of South Africans have continued along perhaps observable lines: those that have, get more; those that don’t have, have a devil of a time improving their standard of living. This is significant, also, because the report takes into account citizens’ subjective experience of their access to resources, so it paints a picture of their expectations to some extent as well.

There have been improvements, but while encouraging, these have also been limited. Earlier this month, a report by the Institute for Race Relations entitled Reasons for Hope delivered some good news about South Africans’ standard of living: among other things, that the number of people living in formal housing had increased by 131% in the last 20 years, that there was a notable increase in the number of science and engineering graduates, and the GDP per capita had also increased (inflation aside).

But in the view of many ordinary citizens, they remain stuck. The SARB briefing paper, released on Tuesday November 8, is significant because it reveals South Africans’ lived experience beyond the hard data. A public opinion survey conducted by the IJR and launched in 2003 gives some insight into citizens’ attitudes to national reconciliation, social cohesion, transformation and democratic governance. It surveys a representative sample of around 2,000 people and is the largest longitudinal data source of its kind in the world, says the IJR.

The latest report – fittingly – focused on “Social mobility in an unequal society: Exploring access and advantage in South Africa” and explored South Africans’ perceptions of their access to resources that would enable them to be socially mobile.

“The differences in responses among Living Standard Measure (LSM) groups … are stark when it comes to perceptions of having the required education to achieve self-identified goals, with more than two-thirds (69%) of higher LSM groups’, and only a third (33.3%) of lower LSM groups’ respondents agreeing that they have access to the education they need,” the IJR said in a statement.

There are also significant differences along racial lines. A total of 77% of white respondents, 56% of Indian respondents, 42.4% of black respondents and only 29.8% of coloured respondents feel that they have the education they need to achieve their goals.

Besides the obvious racial divisions, Potgieter also notes that South Africans who identify as coloured “feel that they have been excluded on multiple fronts”, both during and after apartheid. This is an issue that should be investigated further and addressed, she says.

Multiple exclusions also apply to people who are unemployed, the majority of whom reported finding it difficult to access transport to where they needed to go, and not having the education, financial resources or social capital they needed to achieve their goals.

It’s not possible to tell the relationship between LSM (living standard) and the type of goals set – the goals were not defined in the survey. Participants were simply asked whether they had the resources to achieve the goals they had set for themselves, not what these were. So, unless further research is conducted, it’s not possible to evaluate the impact that economic access, or lack thereof, may have on an individual’s self-set goals. (It may be, for instance, that a respondent with a fairly low living standard may have set the goal to complete school or access employment while a more privileged respondent may wish to buy a mansion or retire at 40, and not having the resources to do so may not necessarily reflect on the poverty of their circumstances. It’s important, therefore, to bear in mind the subjectivity of the survey and its purpose as a self-assessment of relative upward mobility.)

The latest findings reinforce what the IJR has termed “persistence of racialised responses and experiences”, which also emerged in the second SARB briefing paper detailing economic security post-apartheid.

“Persistent socio-economic inequalities continue to affect the progress made in terms of social cohesion and reconciliation in a post-apartheid South Africa, while efforts to address these inequalities have not been successful,” the latest report argues.

“During the course of 2015/2016, the frustrations resulting from vast socio-economic inequalities found (and is still finding) an outlet in the national student protests for free higher education in South Africa. Under the banner of “#feesmustfall”, multiple layers of advantage and disadvantage, of access and non-access, of inclusion and exclusion became apparent – prompting for the need of a much deeper understanding of South Africans’ lived realities of socio-economic inequalities, as well as the obstacles and aids to social mobility.”

In a critique of the SARB survey, Luke Spiropolous wrote that the survey is an “important tool” for beginning to understand social cohesion, but that the data is the tip of the proverbial iceberg. In an increasingly restless political climate – where we are rather messily being disabused of any remaining notions of seamless transition – it’s perhaps wise to take this advice. A little more understanding, after all, never hurt anybody. DM