Health-E: The Vet and the Wildebeest

Health-E: The Vet and the Wildebeest 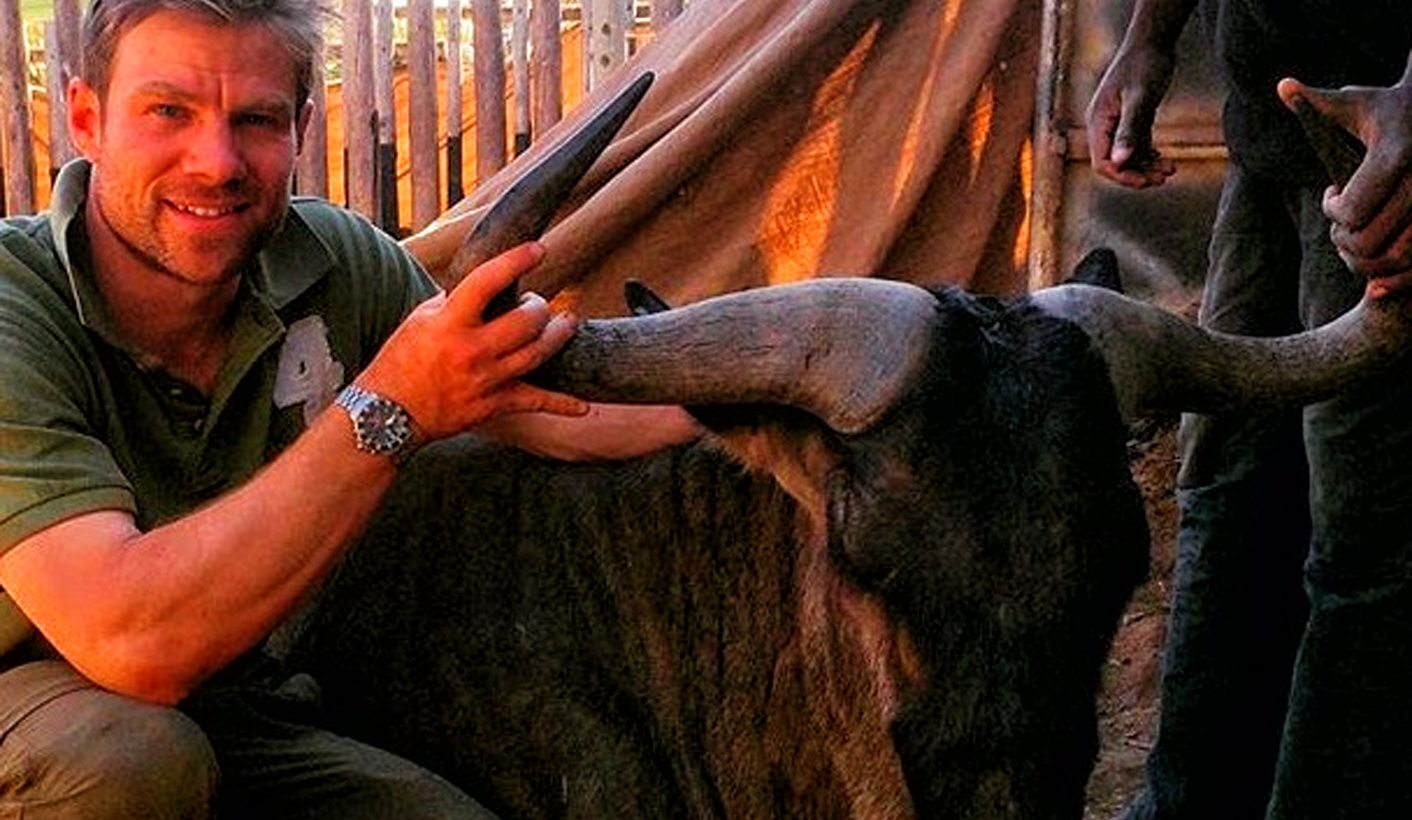 Tuberculosis can be passed from animals to people. A British vet tells HEALTH-E’s AMY GREEN how he struggled to get diagnosed and believes the problem of zoonotic TB is a bigger problem in Africa than most people realise.

A host of veterinary and wildlife professionals move expertly around the 10 still wildebeest on the floor of the enclosure in a game park in South Africa. Just moments earlier, Jonathan Cranston, a fit veterinarian in his early 30s, watched the large animals teeter around for a few moments before settling to the ground after being darted with an anaesthetic bullet.

Cranston, from the United Kingdom, was in the country for just a few weeks at the beginning of 2013 to help local conservationists research stress-levels in these animals when, kneeling over one of the blindfolded animals, he reached into its mouth, grabbed its large tongue and gently pulled it out to make sure nothing blocked its airway.

Bracing himself against the pungent breath of the wildebeest, he reached further into its mouth to scoop out any unswallowed food. Although it was one of the furthest things from his mind at the time, he believes this was the very moment he was exposed to and contracted zoonotic tuberculosis (ZTB).

Also unlike “human” TB, ZTB is not usually spread through the air. It is transmitted from animals to humans through food supplies (usually unpasteurised dairy products) or from direct contact with animals.

Six weeks later, back home in England, a sharp pain in his chest woke Cranston up in the middle of the night. He then experienced breathlessness, coughing and night-sweats – all classic symptoms of TB. But his doctors believed he had suffered from a bad case of pneumonia and prescribed him a course of antibiotics, which didn’t work.

When he was eventually diagnosed with TB he told his doctors he probably had ZTB from coming into close contact with the saliva, blood, urine and other fluids from infected animals during his work in Africa.

But they did not believe that it was likely and started him on medication to treat conventional TB. It took over four months for Cranston eventually to be diagnosed correctly, in a country where healthcare is accessible and well-resourced.

The World Health Organisation (WHO) estimates that “in 2015, there were an estimated 149,000 new human cases of zoonotic TB globally, and 13,400 deaths due to zoonotic TB”.

According to Adrian Muwonge, who heads up the zoonotic TB division at the International Union Against Tuberculosis and Lung Disease (The Union). While about half of the new cases occur in Africa, the continent reports almost 80% of the deaths due to this strain of the disease.

“Ebola killed about 9,000 people. This kills 4,000 more – every year. If you put that in context with the amount of money that has been spent on Ebola, and is still being spent, the two are not comparable,” he told Health-e News at the 47th Union World Conference on Lung Health held in Liverpool last month.

While there was good reason to invest in the deadly Ebola epidemic, he said ZTB should be given the same level of attention given its considerable death toll, especially among the world’s most vulnerable.

“A fundamental issue about ZTB, and why it remains low on the international agenda, is that it affects people who don’t have a voice,” said Muwonge.

He said those most at-risk are usually poor, uneducated people living in rural areas where pasteurisation is not common and where making an accurate diagnosis is even more difficult.

Alejandro Perera, from the United States’ Department of Agriculture in Mexico, says one of the reasons for this is that ZTB often infects tissue other than the lungs – the most common site for human TB.

Cranston’s TB infection was actually located in the cavity around his lungs and was eventually diagnosed after tissue from this area was surgically removed and taken to a lab to be tested.

Perera says many people in countries most affected by this disease do not have access to the sophisticated medical equipment and expertise required to conduct these procedures and tests. But even for cases of ZTB which appear in the lungs, traditional sputum tests do not differentiate between this disease and normal TB.

According to Perera this is important because the two diseases require different treatment for different lengths of time. ZTB is naturally resistant to one of four main drugs used to treat human TB. Besides the fact that people with ZTB being given standard treatment won’t get better, there is a significant chance of the bacteria developing resistance to one or more of the other three drugs.

He says this could lead to the development of a multidrug-resistant strain which would be much more difficult to treat as the drugs are old and toxic, often leaving survivors with debilitating side-effects such as deafness or blindness.

When Cranston was eventually diagnosed with ZTB, after three months of treatment for human TB, his doctors discovered he was resistant to two of the main anti-TB drugs. He does not know if he contracted a strain that was already resistant or if his ineffectual treatment caused further resistance. But Cranston was “lucky” –his doctors where able to substitute the drugs and he was eventually cured after the nine-month course.

“We really need cheap and fast diagnostic tools to distinguish between the two at an early stage, before patients start treatment,” says Perera.

Last month the medical journal The Lancet Infectious Diseases published the first global call to action for a co-ordinated response to ZTB. The authors said that not all TB is the same and the scant available evidence shows “zoonotic TB being far more common than previously recognised”.

TB is the leading killer among infectious diseases on the planet – over 10-million people fell ill with the disease in 2015. While ZTB represents only about 1% of this, the report’s authors said the scale is probably under-estimated due to a lack of data and are calling on “tuberculosis stakeholders” and national governments to increase surveillance of the disease to properly estimate its effect on humans.

South Africa should be especially concerned as it already has a huge TB burden – including a significant proportion of the world’s drug-resistant cases. According to the WHO, South Africa has one of the highest global burdens of drug-resistant TB with more than 18,000 cases diagnosed in 2014.

And while the disease is typically found in livestock, earlier this year Stellenbosch University researchers revealed that zoonotic TB had been found in a range of animals in the Kruger National Park including lions, cheetahs, wild dogs and rhinos. The university has developed a test to make wildlife easier to diagnose so they can be isolated and treated.

Infected livestock are typically slaughtered but ZTB consultant for the Union, Francisco Olea-Popelka, told Health-e News that doing the same with wildlife can have even more severe economic implications – particularly for the country’s tourism sector.

“There have been cases of wildlife being treated and cured but the huge amount of drugs needed over a period of years is incredibly expensive. Treating one elephant can cost $100,000,” he says.

After Cranston started experiencing night sweats and breathlessness he researched his symptoms one night on the internet. “Everything kept pointing to TB,” he says. “But even with this knowledge and being a health professional myself, getting diagnosed was a struggle.”

A feeling of dread came over him that night as web pages informed him about the toxic drugs used for drug-resistant TB – and their side-effects.

“I had never considered the possibility of going deaf, for example. And although I knew about this disease from my work with animals I did not appreciate the seriousness of it until I went through it myself. If it can happen to me it can happen to anyone – and unfortunately the reality is that most people won’t come through it cured like me.”