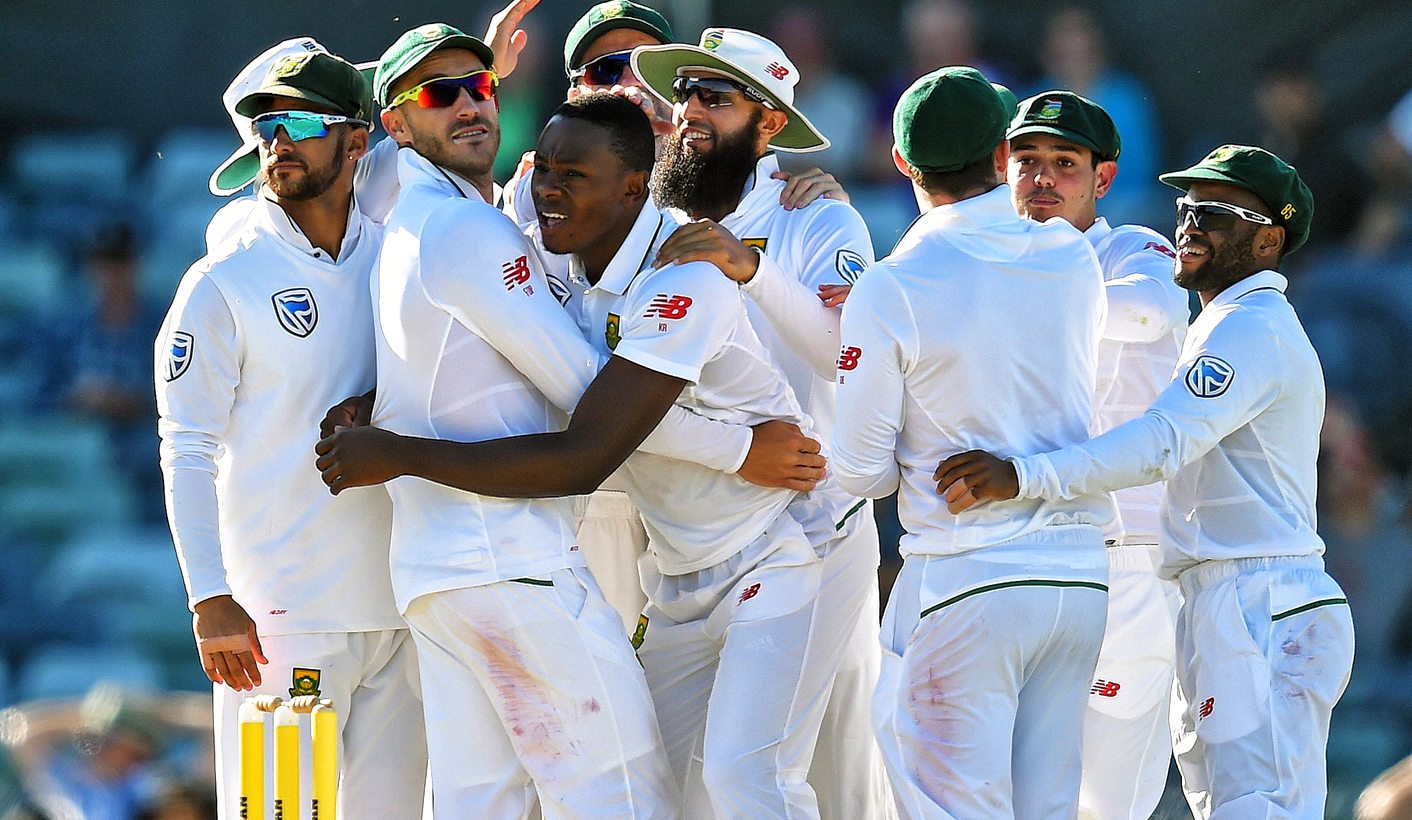 Before South Africa’s remarkable victory at the WACA on Monday, Australia had not lost the first home Test of a series since 1988. Despite being down and out on day two – and without talisman Dale Steyn – the Proteas engineered a spectacular comeback with young Kagiso Rabada leading the bowling attack with maturity that belies his 21 years and the batsmen digging in. By ANTOINETTE MULLER

It’s taken about 12 months, but the real South African Test team has finally stood up. Despite their slow start in the first Test against Australia in Perth, which saw them scuttled for just 242 in their first innings, the Proteas did what they do best: absorbed and transferred the pressure back onto the Aussies and clinched a 177-run victory to take a 0-1 series lead heading to Hobart.

That they managed to recover from such a paltry first innings total is impressive, but that they did largely without the services of Dale Steyn is something that will come to define them. Steyn was ruled out injured with a fractured shoulder on day two, just after he dismissed David Warner and sparked an emphatic collapse.

Just two of the South African team – Stephen Cook and Hashim Amla – had a bit of an “off” Test. Every single other player was exceptional in one way or another. Whether it was Faf du Plessis’ captaincy, Temba Bavuma’s exceptional fielding, Quinton de Kock’s theatrics, Kagiso Rabada’s phenomenal bowling or anything else in-between, for the first time, in what feels like a long time, the South African side stood up and delivered. The failures against India and England suddenly seem like a world away.

And, if this performance is anything to go by, the future of the Proteas’ bowling attack is safe hands. Rabada, who has been exceptional ever since his performance in the Under-19 World Cup South Africa won, seems to only get better the more he bowls. His uncanny ability to bowl fast with incredible control and exploit swing almost certainly makes him one of the best bowlers in the world right now – and he’s played just nine Tests. Provided his workload is managed properly, Rabada could be tormenting batsmen for at least another ten years.

From a batting perspective, the gremlins which plagued them on the rank turners in India and to an extent, the pace of England, seem to have been exorcised and management might be wondering where exactly AB de Villiers will slot in when he eventually returns from his injury; still, for a team who was in the doldrums just a few months ago, that’s not the worst problem to have.

South Africa outplayed Australia from every single aspect and now have a massive psychological advantage for the rest of the series. The win also vindicates their declaration decision. Even with the gift of 20-20 hindsight, they got it spot on.

You might be crying a million variations of “what ifs” and this is being written with the benefit of the hindsight. Some might argue that this was “typical South African conservatism”, but the Proteas had many things to consider with how they timed things.

First, they’d have to get ten wickets with just three frontline bowlers. South Africa eventually made it look easy in the first innings, but that’s when they were still fairly fresh. Workload management, especially with two Tests still to come, was at the top of the priority list. Ensuring the bowlers are fresh and rested when the team head to Hobart was paramount – bowling for two days is not the best way to go about this.

“Does batting not tire you out, too?” you bellow. It does, but not nearly as much as bowling does. The mechanics that the human body has to go through in order to deliver a ball at pace is not natural. Of course batting isn’t exactly a relaxing affair either, but at least the body is not experiencing extreme stress every 30 seconds or so.

This delayed declaration wasn’t really about runs or by ensuring “safety”. It was far more about mentally disintegrating Australia and ensuring that their two frontline bowlers are managed properly, all while still giving themselves a chance to win.

Let’s assume South Africa declared an hour before lunch on day four. Let’s also assume the worst case scenario happened: Australia somehow managed to tough it out for a draw. It was unlikely, but not impossible – South Africa themselves have hatched similar Houdini-like plans before. It would have meant that the bowlers had to churn through more than 160 overs.

The concern here is that South Africa’s bowlers have not had to put in such lengthy spells at full strength for a long time, never mind with a frontline bowler short. The most overs South Africa’s bowlers have gotten through in a single innings in a Test in the last 12 months is 117.5 – against India in Delhi last year. In Bangladesh in 2015, they also churned out 116.1, but over the last couple of years, the workload has mostly hovered at around 100 overs. For the first time in his short career, Rabada bowled over 300 deliveries – and South Africa’s bowlers churned through 119.1 overs.

To bowl teams out in the fourth innings, South Africa have needed between 70 and 80 overs in the last six years, so time to get all the wickets, even with a bowler short, was never really too  much of an issue, even if that declaration had been delayed until before tea on day four.

Even when taking into consideration the part-time efforts of JP Duminy, Stephen Cook, Dean Elgar and whoever else fancies turning their arm over, they aren’t exactly the kind of bowlers you want trudging in against a settled David Warner. If South Africa had not managed to nab him early, and the two quicks had tired, Warner could have become a real nuisance.

Fortunately for the visitors, it all worked out in the end and this rather stunning win should provide the blueprint for how they play their cricket going forward. It was ruthless, with a mischievous edge led by a skipper who has brought back a swagger that’s been missing for a long time. DM