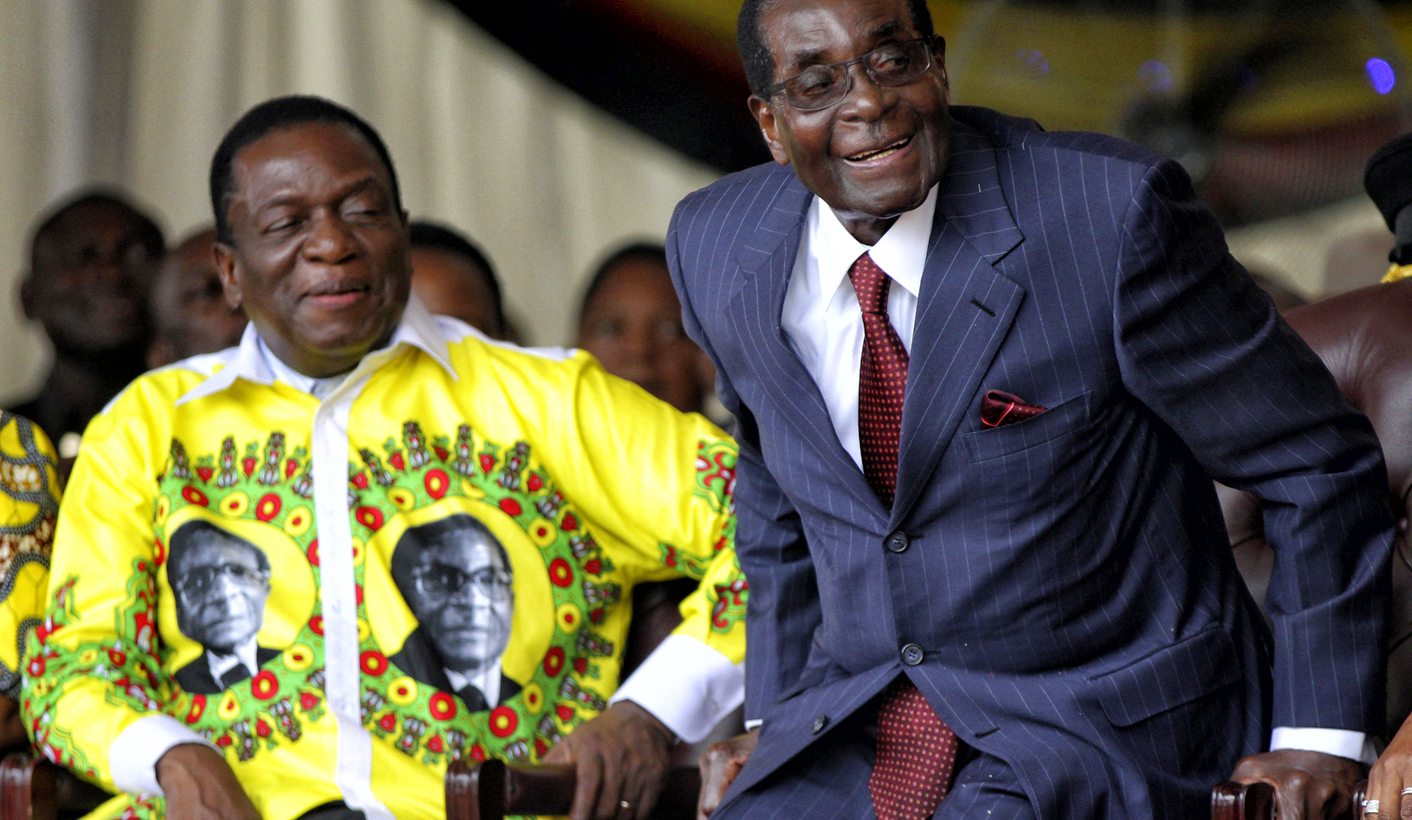 Harare is a tough gig for any British ambassador, but Her Majesty’s current representative is finding it harder going than most. Why is she so unpopular, and does it matter? By SIMON ALLISON.

At any question-and-answer session, there’s always someone who asks something inappropriate.

In Harare on Wednesday night, at a panel discussion on Zimbabwe’s post-Mugabe future, that person was Pride Mkono, an unemployed university graduate turned youth activist. In fact, his wasn’t really a question, but a verbal assault aimed at Catriona Laing, Britain’s ambassador to Zimbabwe.

“I speak for the youth when I say that the British ambassador has tried everything and failed. It’s time you leave this country! We don’t desire to be a colony again!” said Mkono, visibly angry, before being chastised by the moderator – not so much for his sentiment as for his tone.

Laing, ashen-faced, slunk further into her chair. She’s not very popular here at the moment, and she knows it. She arrived late and scuttled off before anyone – including this journalist – could get around to raising any difficult subjects.

An economist by training, Laing is not a career diplomat, having joined the Foreign and Commonwealth Office in 2012. Even for an experienced diplomat, Harare – where Britain struggles to escape its colonial history – is never easy.

As a spokesperson for the British Embassy explained, in a written response to Daily Maverick questions: “The British Ambassador is a politically charged role in Zimbabwe, given the history, and always subject to more scrutiny than most other Ambassadors. The Ambassador is also criticised by government for supporting opposition and civil society. That is the nature of the job. We are dealing with the febrile political atmosphere in a country facing profound difficulties – but it will not distract us from our overall aim to support the people of Zimbabwe in our shared aspiration for a more peaceful, prosperous and democratic society.”

Laing, however, has attracted more opprobrium than her predecessor, seemingly alienating almost the entire spectrum of opposition parties and social movements. She is accused of intervening in the ruling party’s internal faction-fighting in favour of Vice-President Emmerson Mnangagwa; and of encouraging the international community to organise a bailout for Robert Mugabe’s cash-strapped regime.

Laing has also been criticised for facilitating a meeting between finance minister Patrick Chinamasa and Peter Mandelson, a former British cabinet minister and now head of Lazard International investment bank, earlier this year. It was subsequently revealed that Lazard’s engaged in later negotiations with Chinamasa on a potential $1.1-billion bailout.

“We have been crystal clear, we do not back any party, faction or individual. There is little we can do about a rumour mill other than to keep restating and explaining our position. We focus on the policy outcomes that are required to get Zimbabwe back on track – through improvements in economic governance, human rights and the rule of law. It is for the people of Zimbabwe to choose their political leadership,” said a spokesperson for the British Embassy, in a written response to questions.

“If we had to suggest why the rumours persist it may be that because the UK, as part of the EU and along with most other foreign partners here, has been willing to engage with the government’s Lima Plan for economic re-engagement…There is a view among some groups in Zimbabwe that this pathway to reform, even with all the conditions attached, should not be an option for Zanu-PF. That view is not shared by the EU or UK. The incentives to reform have to be available to any ruling party without discrimination. How they respond is for them to decide,” the spokesperson continued. She added that Britain was “completely hard-nosed” in ensuring conditions on economic, political and human rights reform were met before any bailout could be considered.

“I’m very concerned about the British. They’ve been very vigilant in their support of Mnangagwa. They even denied some activists visas to the UK. The Brits should let Zimbabwe determine their own destiny. As far as we are concerned, Mnangagwa is the same if not worse than Mugabe,” said Promise Mkwananzi, spokesman for Tajamuka, a prominent youth movement. Mkwananzi himself was denied a British visa, as was fellow activist Linda Masirira. Both believe the denials were politically motivated, although the embassy disputes their account.

Mnangagwa is a stalwart of the ruling Zanu-PF, and a frontrunner to succeed President Robert Mugabe. He is from the party’s hardline wing, and is implicated in multiple human rights abuses, most notably in the infamous Gukurahundi massacres of the 1980s, in which thousands of people in Matabeleland were killed by government troops.

Mnangagwa is not, in other words, a very nice guy. But in a series of interviews, Zimbabwean activists and politicians said that behind the scenes he is being actively supported by Ambassador Laing. They claim that she views his succession as the best way to encourage stability in Zimbabwe. Her name was mentioned repeatedly as a major roadblock in the pursuit of substantive political reform.

Tendai Biti, head of the People’s Democratic Party and former finance minister during the Government of National Unity, said that the United Kingdom – under Laing’s guidance – is attempting to shore up the Mugabe regime. “They say let’s bail out this regime, because things might get worse and clearing the mess might be more expensive. For Christ’s sake, things reached rock bottom a long time ago. Ask the 79% of Zimbabweans living in extreme poverty. Ask the 91% who don’t have a job… It’s absolutely nonsense, it’s ghoulish.

“[They] are arguing that Zimbabwe needs a strongman. By that they mean a man called Emmerson Mnangagwa, who suddenly is a reformer. He has been in government for 36 years and I know of no single act of reform he has done. It doesn’t end there. This guy was part and parcel of Gukurahundi. I call him the Butcher of Esigodini [a village in Matabeleland]. So now you want to impose the Butcher of Esigodini on our people. Shame.”

Morgan Tsvangirai, former prime minister and leader of the Movement for Democratic Change-T, the largest opposition party, was more diplomatic than Biti but ultimately no less scathing about Britain’s approach.

“I engage the British ambassador. She has vehemently stated her position that people are labelling us this left, right and centre. But her position is we don’t support individuals, we support the people of Zimbabwe, and I take her word for it.

“But I think their initial position of believing that Africa must have a strongman still influences their perspective of what an African leader should be like, and hence they are kowtowing with ‘better a reformed Zanu-PF than a change of government’. From that perspective, they will be wrong. They will be wrong,” said Tsvangirai.

The severity of this criticism from key voices in Zimbabwean politics and civil society leaves the British Ambassador in a tricky position. In this context, the truth or otherwise of the allegations against her hardly matters – it is the depth of those negative perceptions that is going to complicate her relationship with key stakeholders, and undermine her ability to do her job.

The British Embassy claims that the controversy simply comes with the territory. This is true, but disingenuous. Good diplomacy requires the ability to navigate the complexities of tricky positions: to deflect criticism, to maintain difficult relationships, to calm stormy waters. Her Majesty’s representative in Zimbabwe appears to be having exactly the opposite effect, exacerbating tensions in an already delicate political situation. Maybe not all ambassadors are diplomats, after all. DM

Photo: Zimbabwe’s President Robert Mugabe (R) shares a joke with his vice-President Emmerson Mnangagwa during Mugabe’s birthday celebrations at Great Zimbabwe in Masvingo, February 27, 2016. Mugabe marked his 92nd birthday at a nearly $1-million party organised by supporters in a drought-stricken area on Saturday, drawing criticism from opponents who said the celebrations were an affront to ordinary Zimbabweans. REUTERS/Philimon Bulawayo