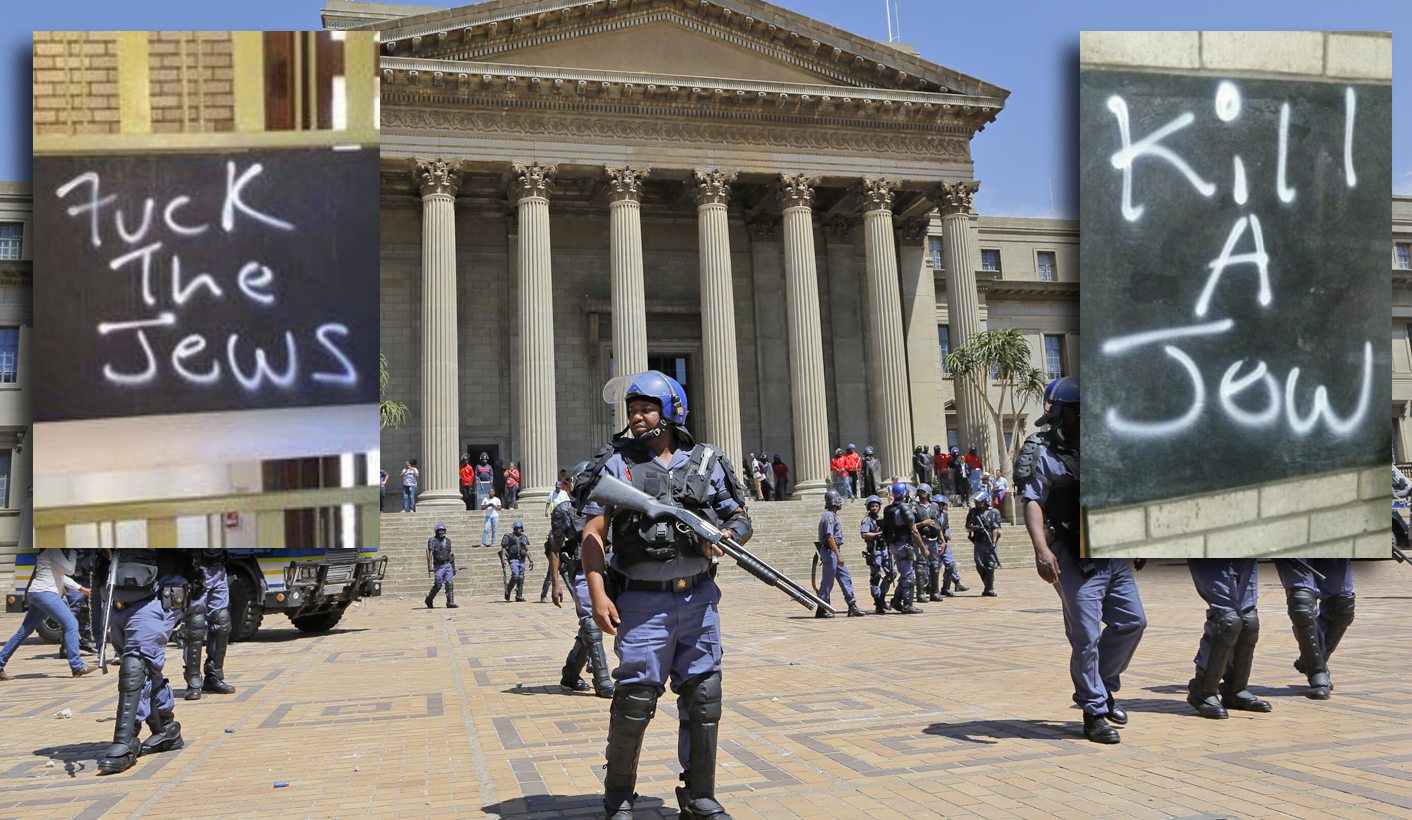 Those of us who support the struggle against the commodification of education, and the deracialisation and decolonisation of our universities, need to take an unambiguous position against the various kinds of chauvinism that have sometimes appeared within the student movement – including misogyny, homophobia, xenophobia and anti-Semitism. By VASHNA JAGARNATH.

The anti-Semite has chosen hate because hate is a faith; at the outset he has chosen to devaluate words and reasons.

On Tuesday morning, nauseating anti-Semitic graffiti declaring “Fuck the Jews” and “Kill a Jew” appeared on the campus of the University of the Witwatersrand. This kind of anti-Semitism comes straight from the lexicon of European fascism. One expects this kind of poisonous ignorance from the Ku Klux Klan in the backwoods of Alabama, or a drunk teenage fascist in the backstreets of some dismal Eastern European city. But for it to appear on the campus of one of our great universities, in our most cosmopolitan city, is truly distressing.

We don’t know who is responsible for this graffiti, or what relations, if any, they may have with any political project on the campus. But we do know that there is a history of anti-Semitism on the campus.

In 2013 people protesting under the banner of BDS South Africa sang “Dubula e Juda” [Shoot the Jew’] outside the university’s Great Hall. Muhammed Desai from BDS South Africa notoriously responded by commenting: “The whole idea of anti-Semitism is blown out of proportion.” This is not the only occasion in which BDS South Africa has been associated with reckless and unethical forms of politics.

Camalita Naicker and Palesa Morudu both wrote important pieces on the damage that this debased form of politics was doing to attempts to build principled solidarity with Palestine, and to our own society. BDS sycophantic relationship to Zuma’s ANC is also disturbing.

It is encouraging that a good number of people committed to solidarity with the Palestinian struggle now refuse, as a matter of principle, to work with BDS South Africa. Many people have come to the conclusion that the organisation is, in global terms, a serious liability to international solidarity with Palestine. As feminist intellectual Nomboniso Gasa recently tweeted, if we are to build a principled solidarity with Palestine in South Africa, “it is important to learn from Palestinians who reject anti-Semitism”.

Then of course there is the matter of Mcebo Dlamini – the Hitler-loving homophobic fantasist who has won considerable authority in some sections of student politics on the campus. Dlamini’s anti-Semitism, like the recent graffiti, is lifted straight from European fascism. It is a serious debasement of the struggle to decolonise our universities.

Of course, it would be dangerous to paint an entire movement with one brush. The student movement is not monolithic. Moreover, it does not have the organisational form that can enable consensus to be reached on principles and leaders and members to be held to account to those principles. But those of us who support the struggle against the commodification of education, and the deracialisation and decolonisation of our universities, do need to take an unambiguous position against the various kinds of chauvinism that have sometimes appeared within the student movement – including misogyny, homophobia, xenophobia and anti-Semitism.

When a figure like Dlamini says, speaking of Jewish people, “They are devils, they are good for nothing” it is not enough to say that he has been misunderstood. Sweeping severely reactionary forms of politics under the carpet creates an environment where chauvinism can take hold – with very dangerous consequences. One only has to look at Narendra Modi’s India, or Donald Trump’s America, to see how quickly reactionary forms of politics, built around the active encouragement of chauvinism, can be normalised and move to the centre of the political stage.

Dlamini’s anti-Semitic utterances are based on the import of a prejudice deeply rooted in European history. The most sophisticated histories of the emergence of racism in Europe show that it developed out of the persecution of Jews and Muslims by Christians. For hundreds of years, when Jews and Muslims had to flee the often severe intolerance of Christian Europe, the more open societies of North Africa and the Middle East provided refuge. There is a reason why Frantz Fanon’s teacher in Martinique, Aimé Césaire, warned his student about the connection between anti-Semitism and other forms of racism. While a student in France, Fanon wrote that:

“At first glance it seems strange that the attitude of the anti-Semite can be equated with that of the negrophobe. It was my philosophy teacher from the Antilles who reminded me one day: ‘When you hear someone insulting the Jews, pay attention; he is talking about you.’ And I believed at the time he was universally right, meaning that I was responsible in my body and my soul for the fate reserved for my brother. Since then, I have understood that what he meant quite simply was the anti-Semite is inevitably a negrophobe.”

Dlamini’s anti-Semitism, and now this graffiti at Wits, have become notorious because the overt expression of prejudice is so crass. But we must remember that anti-Semitism plays out in our society daily in a variety of more subtle forms. These include ridiculous misunderstandings about Christianity – originally a minor Jewish sect – to proverbs, jokes and adjectives around money, as well as the more explicit versions of anti-Semitism in some forms of conservative Islam and right-wing Christianity. Anti-Semitism was the order of the day during apartheid. The Catholic Church has a horrendous record in this regard, as do some forms of Pentecostalism.

Other responses to this graffiti have been locked into the politically bankrupt logic of multiculturalism. In has been assumed that the graffiti is somehow only offensive to people who happen to be Jewish. But the whole point of progressive commitments is that they are held as universal principles. Fanon understood this well. He wrote: “Anti-Semitism hits me on the head: I am enraged, I am bled white by an appalling battle.”

There has also been the usual “whataboutery”, a relentless plague on the discourse in our public sphere. There is no choice to be made between the basic moral obligation to oppose anti-Semitic abuse and all other forms of prejudice and abuse. In 2013 grotesquely Islamaphobic posters – designed by a far right-wing pro-Zionist lobby group in Los Angeles – were put up across the campus of the University Currently Known as Rhodes. A principled politics must oppose these Islamophobic posters and the anti-Semitic graffiti at Wits. In the same way any credible progressive politics should be against the actions of the Israeli state and any form of anti-Semitism. As Tariq Ramadan has pointed out: “While criticism of Israel is legitimate and justifiable, it cannot be an excuse – in any way, shape or form – for anti-Semitism.”

It is just ridiculous to suggest, as some have, that opposition to the denial of bail to Mcebo Dlamini somehow legitimates the expression of anti-Semitism. This is not rocket science: Dlamini should be granted bail and anti-Semitism should be opposed.

South African politics feels like being at a trippy excursion to the fairground. We experience radical highs one moment and radical lows the next. We lurch from Mcebisi Jonas to Des van Rooyen as if we were on a fast-paced loop-the-loop roller coaster. We are surrounded by clowns – often, like Shaun Abrahams, of the very disturbing type. There are all kinds of sideshows and spectacles ranging from the bizarre to the banal and the beautiful.

Life in this fairground can be exhausting and disorientating. We can’t find a way through if we can’t see beyond the noise, the distorting mirrors and the spectacle. Some principles are required – and they don’t all have to be invented from scratch. We have a well-established progressive tradition to draw from. Among the many resources of that tradition is the famous poem by Friedrich Niemöller: