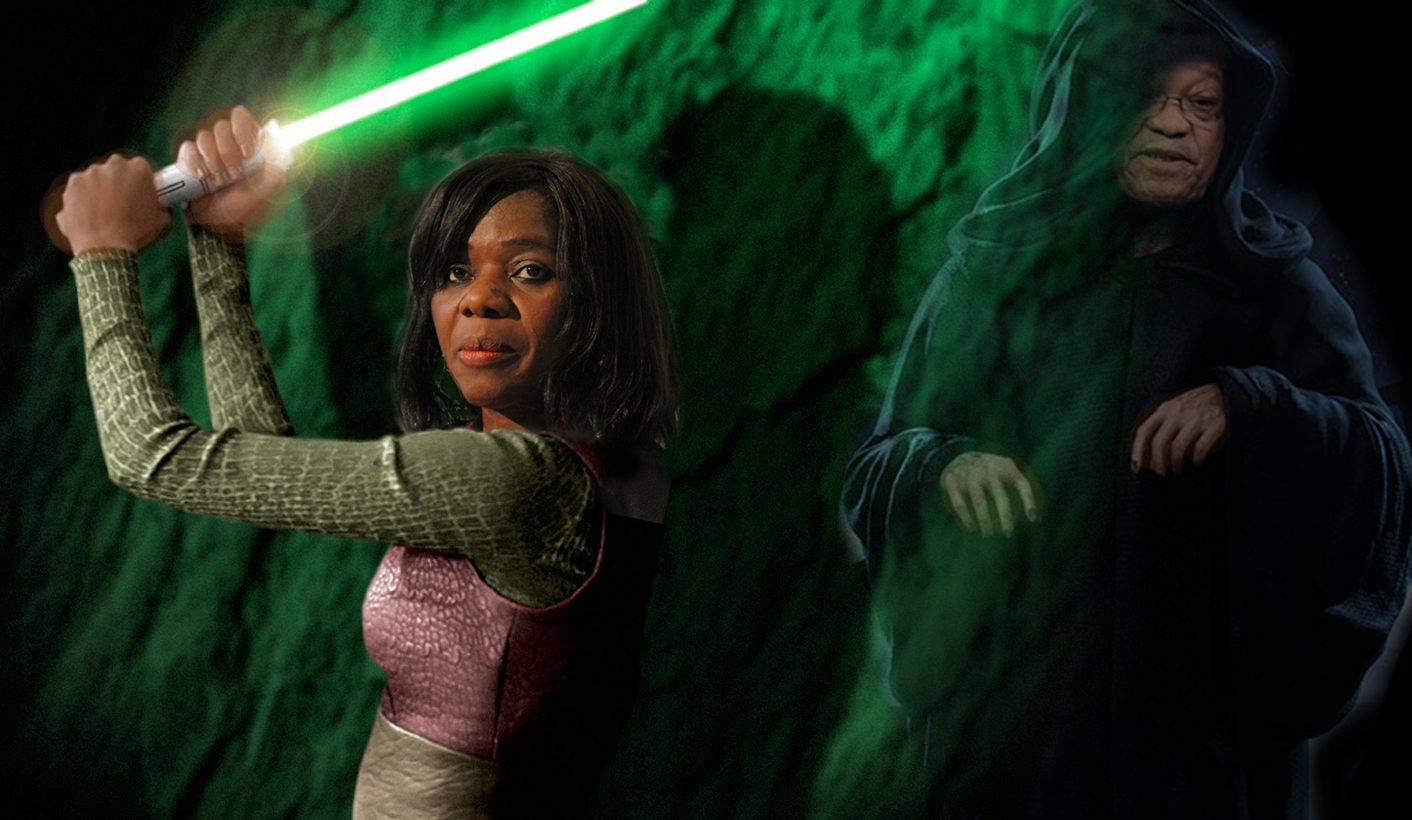 The former Public Protector’s report into State Capture is one of those documents that is going to set the foundation for months of political discussion to come. But, as many people going through it avidly on Wednesday evening would have noticed, it still does not contain anything earth-shatteringly new. There’s no new smoking gun, no bullet that can be used against President Jacob Zuma that we did not know about already, or that was not yet published in the media, these pages included. Still, there is something that we did not know already, and that could turn out to be a most devastating move for President Zuma and the ANC – that there will now be a six-month judicial commission of inquiry. Which, in turn, will almost certainly feature very public testimony, and many people will be compelled to testify, some against their will. This is something the ANC cannot afford to happen, a true Game Changer. By STEPHEN GROOTES.

“State of Capture” is not a thriller. There are no twists, no turns. There are some wonderful details, like the account by Deputy Finance Minister Mcebisi Jonas of his meeting with the Guptas, which is brutal in its frankness:

“No pleasantries were exchanged” when they first met; they said bluntly that they had already made “six billion rand from government and wanted to increase that to eight billion rand”.

For some people, though, the revelation that Jonas is close to Fana Hlongwane, who played a key role in the arms deal, will raise more questions.

There are also some fun diagrams that show who spoke to whom and when. Eskom CEO Brian Molefe comes out of this very badly. He made dozens of calls to the Gupta family; they made some back. Tells you who held the power in that relationship, doesn’t it? He went to their place 19 times. Did these people never travel themselves? Was everything at their place? Why?

And of course, Mineral Resources Minister Mosebenzi Zwane and Des van Rooyen come out of this looking like tools, political or otherwise. But then, based on their behaviour up until now, we knew this already.

So then, why is this report so important for the future of South Africa?

First, the events moved from the media reports to the official Chapter Nine institution report. One cannot emphasise the importance of that fact enough, especially after the Constitutional Court cast Public Protector’s role in stone by its Nkandla ruling.

Second, consider the tactics used here by Madonsela. She knew she was running out of time. She was conducting the investigation while not knowing who was going to take over from her. But she knew enough to know that after the Constitutional Court’s Nkandla judgment, which made the Public Protector’s recommendations binding, the ANC would almost certainly strive to pick someone pliable. She also didn’t have the money and resources to investigate properly. To go through her report is to see “it seems”, or “it’s worrying” or to marvel at the “coincidence” of certain people meeting each other.

But there are no hard and fast findings.

So, she did the next best thing.

She found a way to make sure that this now goes to someone who can and will make hard and fast findings. She’s taken the ball as far as she can, and now the judges must bring it over the line for a full touchdown.

Many people will say that it doesn’t really matter, Number One has shown that he is the king of playing for time, of taking things to court again and again to force the ref to just blow the whistle. Except that her recommendation, that a judge chair an inquiry, is so inherently reasonable. Who can argue with the need for more investigation, who can say a judge is not qualified, who can say that judge cannot be picked by the Chief Justice? And who can say that it is not in the interest of SA Inc for the commission to be completed within 180 days? To even try interdicting it is to be laughed out of court. (It would also further reveal the legal weakness of Zuma’s position.)

So then, to the politics.

It is undeniable that Zuma has had a bad week. Nehawu has called on him to resign. Even Gwede Mantashe has appeared to suggest that Zuma’s conscience should be implored to play a role here. Yes we know… we have to find it first. (Human science did develop a miracle of non-invasive microscopic surgery – Ed)

But a six-month inquiry… It is close to untenable for the ANC itself.

Consider this: The sight of Zuma himself having to give evidence, on live TV. Imagine the questions that would be put to him. Why, Mr President, did you set up a Cabinet committee to look at the banks and the Guptas? Why, Mr President, did you appoint Mosebenzi Zwane to the Cabinet? Why, Sir, was no real action taken against anyone for allowing this family to use Waterkloof Air Force base? And then this, “Mr President, Sir, why did you fire Nhlanhla Nene, and Sir, I remind you that you are under oath and you may not lie, so for your own sake I implore you not to say it was to appoint him to the Brics Bank.”

And that’s just for starters.

Imagine all the evidence that would be heard before then. In her report, Madonsela explains how she asked Mantashe and Oros, sorry, ANC Youth League leader Collen Maine, to testify. Imagine Mantashe having to give evidence. He would hate it. And, as a generally honest man (for a politician) he would know that he in the end could damage his own party.

The ANC has tried hard to separate its own brand from that of Zuma. The results of the local elections show that it has failed. The longer this went on, the worse their prospects of staying on in power in 2019.

But there is actually another dynamic that could literally kill the party. The inquiry would presumably start, perhaps, by late January. It would run through until probably the end of August, maybe later. This means it would make its findings public, awfully, just before the party’s leadership conference.

The strain of trying to run a leadership contest, in an already fragile movement, with this kind of inquiry televised live to the entire country, and summarised in every news bulletin, analysis and column, would surely be too much for the party to bear. It would be intolerable. Members would leave, some leaders would leave, some Cabinet ministers might just resign. This inquiry could be the final weight that pushes the ANC under the waterline.

This means the party has to find its way out of this gigantic mess. It has to stop this inquiry. But the courts will surely not do it; Mogoeng Mogoeng could well be looking forward to going through his cellphone contacts’ list of judges. Dikgang Moseneke is not that busy at the moment, he’s on a tour promoting his book (which you simply must read this Christmas) after retiring as Deputy Chief Justice. And it would be fun to find anyone not paid by the Guptas claim that Moseneke is not a man of unimpeachable integrity.

And if the courts will not do it, the only way is to actually force the inquiry off the political agenda, to make it happen after the final damage is done and the proverbial plaster was ripped off a ghastly wound. The only way to do that is to make it about people who no longer matter. The only way to do that… is surely to remove Zuma as head of state and completely and visibly sideline him as the lame duck head of the ANC.

Anything else will allow for Zuma’s (and Gupta’s) brand be tied to the ANC’s brand, day in, day out, as the SA public finds out in excruciating detail how the state capture worked and just how much has been stolen. (Allegedly, of course.)

And yet, SA politics being SA politics, it would be foolish to say that that is certainly what is going to happen. But it’s hard to see what other course is open to the ANC at the moment, unless Zuma attempts something profoundly foolish, like the suspension of democracy itself, for which we cannot see him having enough (or any) support withing the party. Okay, maybe from the youth and veterans’ leagues.

There is one other part of Madonsela’s report that tells us something about our country. It’s about our media. Much of her work starts with media reports. Often, people lay complaints after a newspaper does this or a radio station reports that. It is only because of the independent, uncaptured, commercial and non-SABC, non-Gupta media that we know so much about what happened. SA media ensured that the voices of truth cannot be silenced.

Life for the ANC is simply going to get tougher and tougher. Unless it actually takes some firm action.

Madonsela’s final report has succeeded in framing the question. It will set the agenda for the next months and probably for years. One day, when the history is written about these dark times, we will remember the work of Thuli Madonsela, Pravin Gordhan, our judiciary, ands former and current SARS and other state-owned entities’ employees, who kept the torch alive.

We end this written broadcast with a sentimental favourite from Leonard Cohen:

Ring the bells that still can ring
Forget your perfect offering
There is a crack in everything
That’s how light gets in.

Richard Chelin and Rumbidzai Nyoni for ISS TODAY • 2 hours ago