GroundUp: Horse racing in the Eastern Cape – ‘The fastest growing sport in the country’ 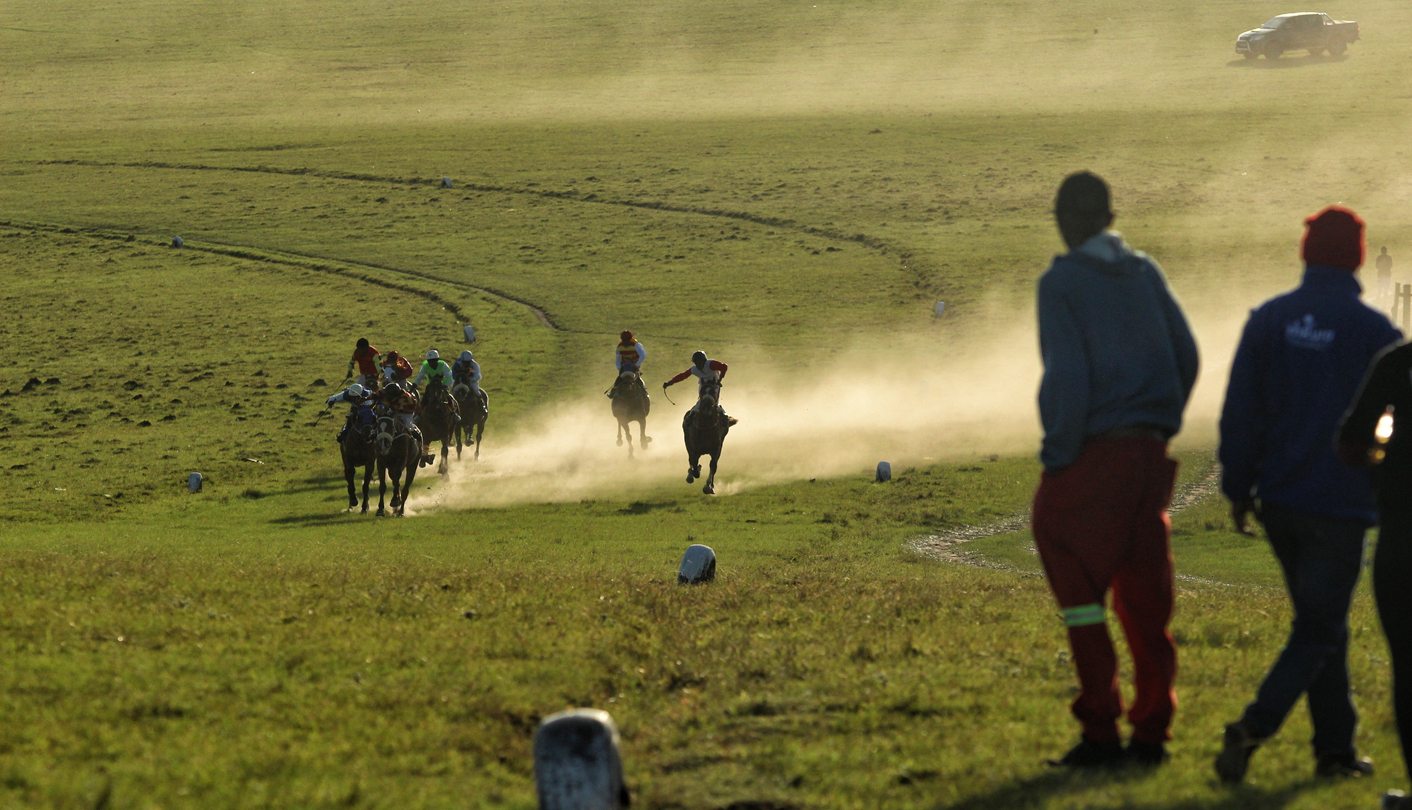 An in-depth look at the changing face of traditional horse racing in the Eastern Cape. By Christopher Clark for GROUNDUP.

Part one of a three-part series first published by GroundUp

Ten kilometres along a dirt road just outside the town of Butterworth in the former Transkei, approximately 50 horse trailers are dotted sporadically across the hillside. A large crowd has already gathered close to the finish line of the 1,400-metre track, on either side of the wide arc of painted car tyres that mark out the entire course.

Meanwhile, owners and breeders prepare their horses for the races, walking them in circles to keep them warm or wrapping their shins and ankles with protective bandages. Small groups of men encircle their favourite horses and sing praise songs to them in isiXhosa.

Men praise-sing for their horses in preparation for a race.

The Eastern Cape Amateur Horse Racing Association Championships will soon be getting under way. According to event organiser Mahlubi Puzi, 58, this annual October race meet has become one of the “major events in the traditional horse racing calendar”, drawing crowds of up to 3,000 spectators from right across the province and beyond; one spectator GroundUp interviewed had driven a taxi-load of horse racing fans all the way from Delft in Cape Town just to see the half-day event.

“Traditional horse racing is woven into the fabric of this area, and into our culture as Xhosa people,” Puzi says. “It’s something that is happening almost every weekend somewhere in the Eastern Cape, even if many people don’t know about it.”

According to Craig Paterson, 32, a lecturer at Rhodes University who is writing his PHD on traditional horse racing, it is “probably the fastest-growing sport in the country”.

“Attendance at races has increased by at least 100% since I started doing my research three years ago. It’s enormously rapid growth,” he adds.

This boom marks a resounding resurgence from what Paterson says was an “almost total collapse” of the sport in the early 1990s, due to the politically-motivated violence that engulfed Transkei.

“There was practically a civil war going on in the region. It got to the point where there was only one race that continued and it was so dangerous, they would go to the place where the race would happen, sit down, negotiate peace, only then have the race, and no one was allowed to discuss the conflict.”

But the origins of traditional horse racing are in fact inherently linked to conflict, with horses first entering Xhosa culture in the first half of the 19th century, when they were sold by Boer traders as weapons of war in the fight against the British colonial forces.

Before horses, the amaXhosa had staged races with cattle. According to Paterson, the transition from cattle racing to horse racing was a pragmatic move: At the end of the 19th century, diseases such as rinderpest, as well as severe drought, killed off large numbers of cattle and prompted the shift.

Paterson adds that there were three distinct styles of cattle racing, which have informed the different styles of traditional horse racing that persist today, sometimes varying slightly from village to village across Transkei.

One such style is Umhambo, where horses are taught to “triple”, a type of fast trot where they lift their front legs to chest height. Umhambo was traditionally used at Xhosa cultural gatherings including weddings and circumcisions.

However, since the 1970s, Umhambo has increasingly become part of competitive racing events too, alongside the more common racing style of Umphalo, which is a galloping speed race.

Puzi notes that there have been various other changes since he first started attending events every weekend as a small boy growing up near King William’s Town in the 1960s:

“You now have more thoroughbreds coming in. It used to be all indigenous horses back then. The prizes are becoming more substantial too. Back then, people were doing it just for the love of the sport. Nowadays, we have got sponsors and [money] for the competitors.”

Remembering the troubles of the 90s, Puzi says: “I still kept my horses. I told people that this sport had prevailed for a long time, so even though it wasn’t happening then, I knew it would re-emerge. And again, it unfolded, it boomed again.”

“People in the rural areas in the former Bantustans gave South Africa a chance. In 1994 they were South African – they now call themselves ‘Transkeian’ again. This seems to suggest that disillusionment.

“With that, the people in Transkei are reclaiming their identity without ceding the aspirations that they have from 21st century South Africa. And traditional horse racing is this almost symbolic enactment of identity that is just so pliable for who they are right now.”

Whatever the reasons behind the rapid growth of the sport, it has caught the attention of a smorgasbord of would-be custodians and new stakeholders, from tourism operators and event organisers to local government departments, all of whom are eager to capitalise on its potential.

Among this pack is Luthando Bara, the Chairman of Legends Gaming Promotions and founder of the annual Berlin November, a very glitzy new addition to the horse racing calendar which is approaching its third instalment at the end of November 2016.

“Having visited a number of races, I realised there was an opportunity to monetise this sport and develop it into something that could attract more investment by way of tourists and sponsors and other people from other provinces coming to appreciate what we have here in the Eastern Cape,” Bara says.

Last year’s Berlin November attracted 10,000 spectators. This year, Bara says he is hoping for 15,000. With sponsors including Vodacom, SABC and the Eastern Cape Gambling and Betting Board, last year’s event also provided an unprecedented R250,000 in total prize money, which Bara says he aims to increase to R500,000 in the near future.

But Paterson and Puzi both fear that on the peripheries at grassroots level, where the sport has existed against the odds for so long, there will be little trickle-down or socio-economic contribution from big isolated events like the Berlin November.

Puzi told GroundUp: “These new events are not here to drive the sport, but rather to make it commercial, to make a quick buck. That’s not going to benefit the horse or the owner.”

Paterson concedes that there are very divergent views among the different stakeholders in traditional horse racing as to how the sport should develop, as interest and investment in it continues to grow:

Main photo: Horses and their jockeys race for the finish line in Butterworth, Eastern Cape. Photos by Masixole Feni.