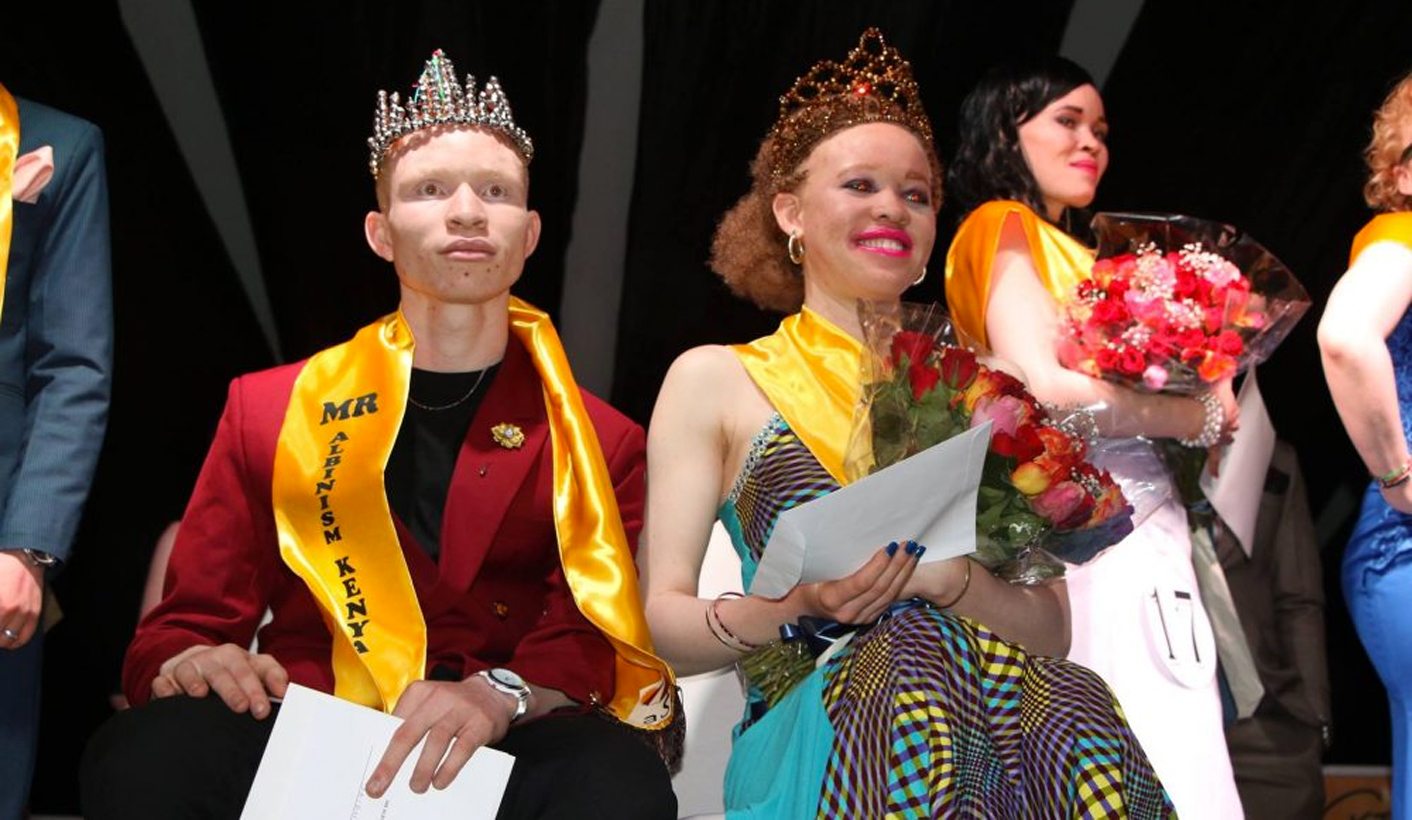 Nairobi, Kenya played host to the first ever albino beauty contest last week. The event served to highlight the troubles faced by Kenya’s albino community, while breaking down the stigma that surrounds it. By NJERI KIMANI.

Photo of the pageant by Samaa TV.

Often hated and hunted for their condition, albinos in Kenya took to the fashion runway to fight for their rights and recognition from society.

In what was a first in Africa and the world, a beauty pageant for people living with albinism took place in Nairobi last week.

Dubbed “Beauty beyond Skin”, the contest was established to celebrate 10 years of existence of the Albinism Society of Kenya and to create more awareness about the medical condition.

About 20 models demonstrated the latest fashions to an audience at the Carnivore restaurant.

In Kenya, albinism is still treated as a curse, and children born with the condition are in some cases thrown in the bush to die or deliberately abandoned in hospital beds by their mothers after delivery. The stigmatisation of albinos can have a severe psychological effect, forcing some to retreat into their own cocoons and avoid any social interactions.

But perhaps the biggest threat comes from ritual killings, as traditional medicine men trade their body parts in the black market. They often demand their limbs, skin or private parts for ritual exercises and good luck charms in a bid to gain more financial and political power.

In 2015, more than 35 albinos were evacuated from the towns near the Kenya-Tanzania border after an increase in ritual killings. These were linked to politicians seeking to be elected.

In some communities, the unfounded belief that sleeping with an albino can cure HIV has seen many become victims of sexual molestation including rape and sodomy.

At the beauty pageant, models petitioned the government to recognise and respect their ability to contribute to the nation. Their outfits depicted themselves in different uniforms – such as waiter, policewoman, army officer, carpenter, stylist, rugby player, air hostess, skater and fighter – to highlight that albinos belong in every part of society.

But it was also about the fashion: ingenious creations were crafted from readily available materials such as cement bags, balloons, paper bags, doormats, cotton wool, CDs/DVDs, toilet rolls, sacks and pieces of cloth.

“For so long albinos have been treated as half-humans because they were different. In turn this has affected our self-esteem and the ability to utilise and explore our skills and talents. We come from a mentality that we cannot achieve what ‘normal’ people can because we are different. Yet time has proven that we can excel in spheres unimagined, like the aviation fields,” said Loyce Lihanda, a contestant and the overall winner of the female category.

Isaac Mwaura, Kenya’s first and only albino MP, said Kenyans need to change their mentality on how they viewed albinos.

“A time is coming when we will have people with albinism serving in the army and police force. We already have some in the National Youth Service, and this is a milestone in achieving inclusion despite the difference in skin colour,” he said.

Mwaura pointed out that the celebration marked 10 years of hard work in the fight against stigma and rejection. “We have come to say that people with disability are beautiful people. We can have the names ‘beautiful’, ‘handsome’ and ‘albinism’ in one society.”

Meanwhile, Deputy President William Ruto assured albinos that his government would work with them to ensure their security is upheld. “The dream of every child is valid, and it does not matter their skin colour,” he said.

Ruto said that the government had earmarked various benefits for albinos, including a 100-million Kenyan shilling (R13.4-million) annual allocation for sunscreen, special sunglasses and tax breaks. This would be accompanied by preferential employment in government offices and free education in primary, secondary, undergraduate and postgraduate levels.

Albinism Society of Kenya Chairperson Alex Munyere pointed out that more still needed to be done to dispel myths about the condition. He added that intimidation and harassment from people, especially while growing up, has serious repercussion in the lives of many albinos, leading to cases of trauma and, in extreme cases, suicide.

“People with albinism suffer a lot of stigma and grow up without parents. If we can appreciate them more, we can break the cycle of low self-esteem and help them achieve their dreams,” said Munyere. DM