Following the Herd: How cows fuelled the war in South S...

Following the Herd: How cows fuelled the war in South Sudan, and how they can consolidate the peace 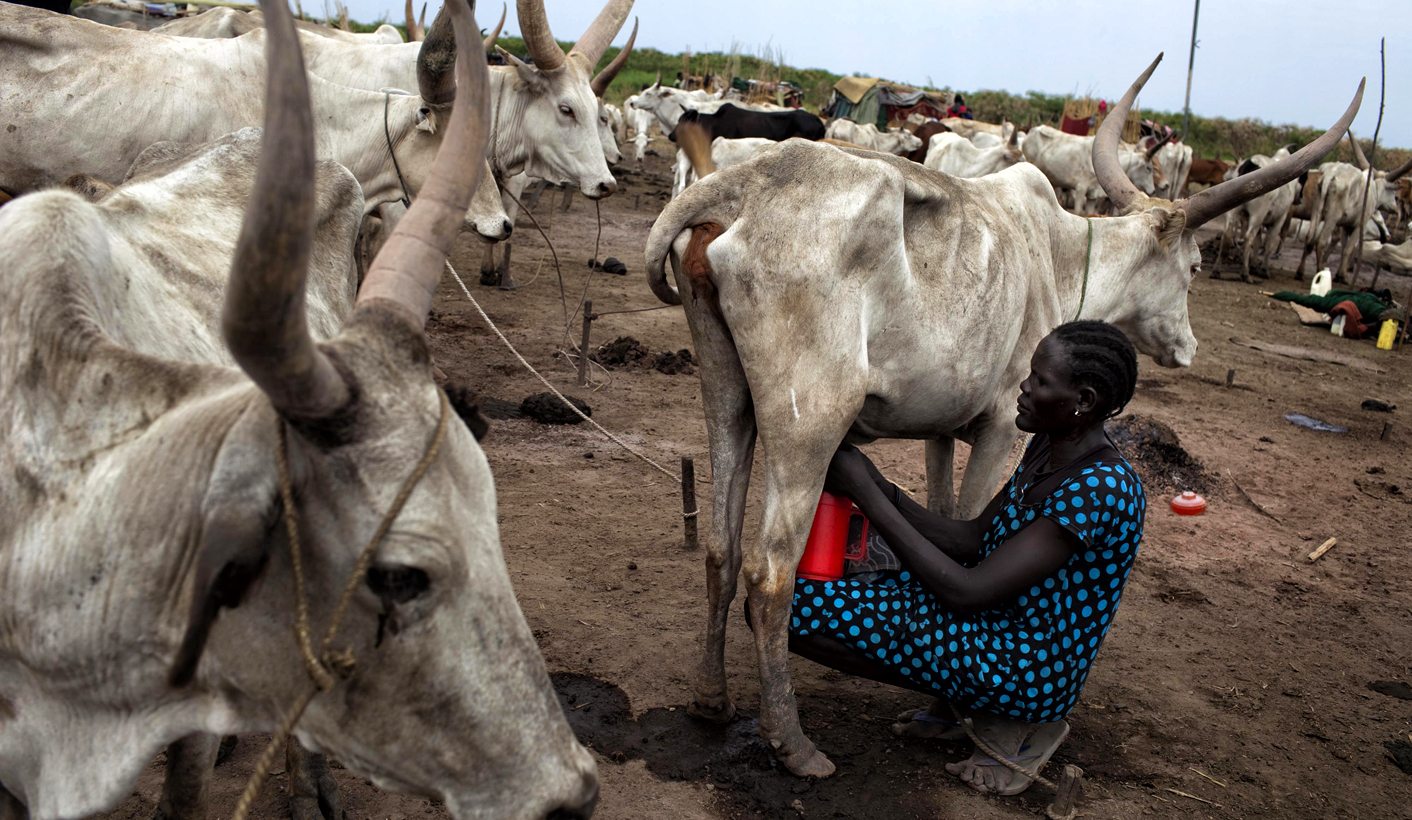 South Sudan’s civil war is about money, oil, power and history. It is also about cows. By SIMON ALLISON.

Tracking the progress of South Sudan’s civil war is a near-impossible task. Little reliable news arrives in Juba, and the spin doctors from each opposing side are masters of the art. So the legion of war-watchers in the capital – the diplomats, the peacekeepers, the humanitarians, and the journalists – deploy a crude proxy to figure out what’s going on. “Just follow the president’s cows,” they say. They are only half joking.

Although officials won’t confirm or deny the figures, President Salva Kiir is rumoured to own enormous numbers of cattle – probably in the tens of thousands, and worth tens of millions of US dollars. He wants to keep his investment safe. So when the herd moves, it is always moving away from conflict.

Not all of South Sudan’s cows are so lucky. The war has taken its toll on cattle populations, which in turn poses a serious threat to the country’s financial – and, ultimately, physical – health.

It is difficult, if not impossible, to overstate the importance of cattle to South Sudan’s economy. South Sudan doesn’t have a proper banking system, and cash is always in short supply, so cows are the financial instrument of choice for about 80% of the country’s 11.3-million people. Cows are living, breathing, shitting, lactating bank accounts, an extraordinarily resilient source of wealth and power in one of the poorest countries in the world.

But maybe not resilient enough.

As South Sudan struggles with the aftermath of its bloody civil war, the fate of its estimated 12-million cattle will be crucial in helping the country get back on its feet. But the animals have not been immune to the war’s devastating consequences, and the scrawny, disease-ravaged herds are not in the best shape to play their traditional role as buffers against instability. If the international community wants to encourage a lasting peace in South Sudan, they will have to look after South Sudan’s cows as well as its people.

There are about 12-million cows in South Sudan, according to the United Nations Food and Agriculture Organisation. More cows than people, in other words. At a very conservative estimate of $100 per cow, that represents a four-legged fortune of about $1.2-billion, most of which is not counted in formal economic statistics (in 2013, pre-war South Sudan’s official GDP was just $1.04-billion). That’s a lot of money by anyone’s standards – especially in an economy that has been devastated by civil war.

“Pastoralism is the central institution around which most of South Sudan’s societies are organised. There are few substitutes for the cattle economy; cattle are the foundations of value, tradition and belief and represent a core thread in the institution of identity. Cattle are social capital. Cattle are also political capital, as herd size correlates with economic and political success,” said Lauren Hutton, a South Sudan analyst.

Given their significance in South Sudan, it should come as no surprise that the country’s cattle have been both a victim and a driver of the conflict. Cattle populations have died in the fighting, or been displaced into areas where they are exposed to deadly diseases. And as families have struggled to find food, cows may be slaughtered or sold on the cheap.

But cattle are also a spoil of war, and therefore an incentive to fight. Rare is the battle report that doesn’t include a note on how many cattle were seized during this government offensive or that rebel attack. Most recently, earlier this year, troops loyal to rebel leader Riek Machar were accused of stealing some 2,000 cattle from the herd of Salva Kiir himself – a lucrative night’s work, and an embarrassing setback for the president. Both ethnic groups and criminal organisations have also taken advantage of the instability to launch their own cattle raids.

“Tribal conflicts, cattle raids, and disease outbreaks have all intensified on an unprecedented scale, threatening the national herd and tearing at the social, political, and economic fabric of South Sudan,” said the FAO in a December 2014 report.

Until the cows come home

Of these threats, disease is probably the most serious. The war has disrupted traditional cattle migration patterns as herders try to avoid conflict, meaning that cattle have suddenly been exposed to a new – and more threatening – environment. These diseases have also been brought back into areas where they did not previously exist. Although it is difficult to pin down numbers, the FAO has warned of a “slow-motion crisis” as South Sudanese cattle succumb to diseases such as foot-and-mouth disease, East Coast fever, peste des petits ruminants, contagious bovine pleuropneumonia and trypanosomosis.

“These endemic diseases were previously confined to specific areas and have now crossed into new territories and infected healthy herds. For example, East Coast fever – a disease transmitted by ticks – was once contained in Greater Equatoria, but has now spread into livestock populations in Jonglei and Lakes States, causing a devastating number of deaths,” said the FAO.

This could have a long-term impact on the ability of South Sudan’s civilian population to recover from the civil war. For many families, their herds are their wealth, and every cow lost is a financial disaster. This impacts on their ability to access food and healthcare. It also disrupts important social traditions: for example, the payment of dowries is almost always made in cattle (typically between 20 and 40 cows). Without enough cattle, parents struggle to marry off their children.

Saving South Sudan’s cattle population is therefore an essential step in saving South Sudan itself. This is not always obvious to the international community. “Development tends to reflect an impetus towards modernisation meaning that cattle camps often miss out on development inputs,” said Hutton.

There are things the international community can do to address the problem. An important first step is to support efforts to vaccinate South Sudan’s cows. Another is to improve veterinary services in the country. These are long-term fixes, however, and it will take years for the herds to recover and migration patterns to correct themselves.

It seems the old proverb applies: in South Sudan, the war won’t really be over until the cows come home. DM

Photo: A photograph made available on 09 March 2014 shows a South Sudanese woman milking a cow in an isolated makeshift IDP camp for Dinka ethnic group placed in an island between Bor and Minkamman, South Sudan, 05 March 2014. EPA/JM LOPEZ