Zuma: If I intervened in Gordhan charges, South Africa...

Zuma: If I intervened in Gordhan charges, South Africa would be a banana republic 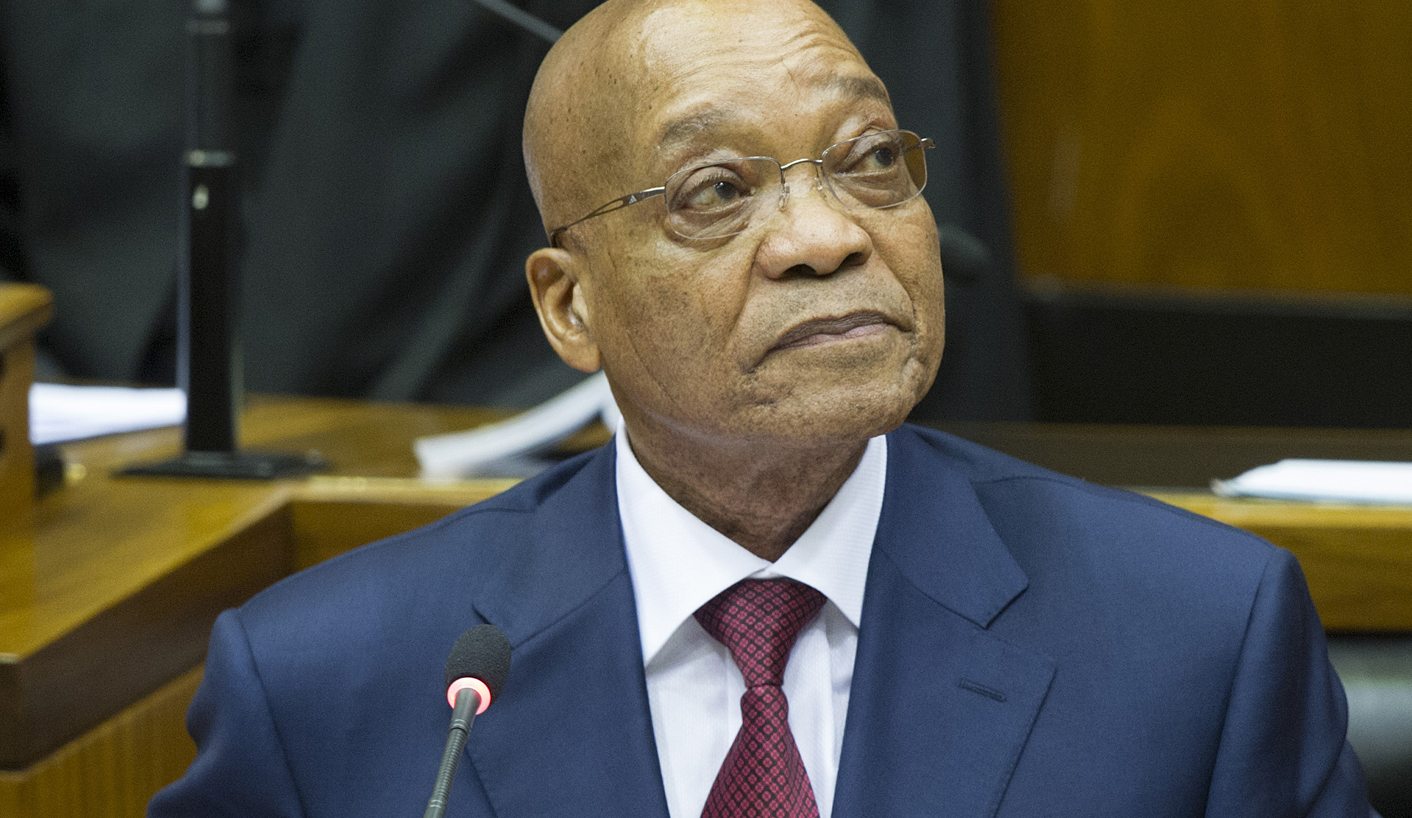 The day before Finance Minister Pravin Gordhan delivers a crucial Medium-Term Budget Policy Statement, President Jacob Zuma on Tuesday said charges against the minister are concerning, but he has no power to intervene. Others suggest Zuma intervened before Gordhan was even charged. By GREG NICOLSON.

President Zuma faced the usual challenges from the Economic Freedom Fighters (EFF) at the beginning of his question session in the National Council of Provinces (NCOP) on Tuesday. The party’s Tebogo Mokwele said Zuma had violated his oath of office. Younus Cassim Vawda said, “We do not recognise the legitimacy of the president of Jacob Zuma of this country.” NCOP Chairperson Thandi Modise promptly ordered security to remove three EFF members while a DA member complained that Parliamentary Protection Services guards had firearms.

Proceedings under way, it wasn’t long until Zuma had to respond to questions on the charges against Pravin Gordhan, the Public Protector’s state capture report, and the economy.

“The recent events regarding allegations and lately charges proffered by the National Prosecuting Authority against the minister of finance are a concern to all of us, including the investor community,” said Zuma. “As Cabinet we have expressed our full support of the minister while respecting the independence of law enforcement and prosecution authority. The minister has also received public support from various stakeholders within the country,” he continued. “He is innocent until found guilty by a competent court of law, like all citizens.”

Gordhan faces a difficult balancing act when he delivers the budget policy statement on Wednesday. ANC stalwarts, civil society, opposition parties and business leaders have criticised the National Prosecuting Authority (NPA) for sacrificing the country’s economic stability for what many say are unsubstantiated charges levelled to weaken Gordhan in the interests of an ANC faction backing Zuma.

On Sunday, 81 CEOs from some of the largest companies operating in the country signed a pledge against the prosecution of Gordhan. “We stand against the damage this has caused to our economy and to the people of South Africa, especially the poor,” said the CEOs, noting the charges are without factual or legal foundation, according to some legal experts.

After Gordhan was appointed finance minister, following Nhanhla Nene’s replacement with Des van Rooyen, who lasted four days, he went on an international charm offensive to repair the damage caused by Zuma’s revolving reshuffles. Wednesday won’t be the first time Gordhan delivers a budget under a cloud of uncertainty. Days before he was to deliver the Budget in February, the Hawks sent questions on his involvement in the SARS “rogue unit”.

South Africa’s 2016 gross domestic product (GDP) is expected to be 0%. The International Monetary Fund on Monday projected 2017 GDP growth of 0.75% for SA, claiming the country is limited by policy uncertainty and structural constraints.

“The matter was never discussed with Abrahams, with the president, never, never, never,” said Zuma on Tuesday. “This country adheres to the Constitution and the rule of law. No individual is given a right within that to interfere with independent processes and decisions of independent institutions. I think if this president was to interfere in any matter, either of Chapter 9 institutions or other institutions, then it would be closer to a banana republic,” Zuma said.

Masutha has also maintained that the Luthuli House meeting discussed the #FeesMustFall protests, although the ministers of higher education and police were not present.

“The National Director of Public Prosecutions has the liberty to enter any venue and to attend the meeting. The last thing I had in mind was that the mere fact that the meeting was taking place at the headquarters of the ANC would be an issue,” Masutha was quoted as saying on Monday. Before the meeting, Zuma already knew that Gordhan would be charged, he said. The DA has said Masutha’s explanation of the meeting was “logically flawed and does not fool anybody”.

Abrahams has argued that the NPA has a strong case against Gordhan, but ANC Chief Whip Jackson Mthembu is the latest party leader to say the minister has been targeted by state institutions pushing political agendas. One of the key issues is who controls the Treasury, government’s purse strings and who has the power to approve or investigate government and state-owned enterprises (SOEs) contracts.

Tied into Gordhan’s prosecution are allegations of state capture. On Tuesday, the president told NCOP he had a right to interdict the Public Protector’s report on the matter.

“As a citizen of this country I have a right, a legal right, to exercise my right and this is what I’ve done in terms of the Public Protector’s report. I interdicted it because she was going to issue a report having not talked to me or asked me questions,” he said.

Zuma was also quizzed on government’s interventions on SOEs and South African Airways chairwoman Dudu Myeni. After the local government elections, a Presidential SOE Co-ordinating Committee was announced, to be chaired by Zuma. It came in addition to the Presidential Infrastructure Co-ordinating Commission, and an already-established inter-ministerial committee on SOEs, led by Deputy President Cyril Ramaphosa.

There was speculation Zuma was trying to take power away from Ramaphosa and assert more control over SOEs, at the centre of state capture allegations. Zuma said the new committee was in line with recommendations from a report on improving SOEs and improving the co-ordination of interventions, an explanation criticised by opposition MPs. “Government continues to work hard to find solutions to ensure the SOEs function more efficiently and more effectively,” said Zuma.

SAA chair Myeni is one of the most controversial SOE leaders. Asked why she was reappointed in September despite the airline recording a R5.6-billion loss in 2015/16, Zuma on Tuesday said her appointment was approved by Cabinet. On the parastatal’s finances, he said SAA has long been in trouble but is improving. “I’m not looking at selling the company. I’m looking at this company getting back to a company that must be viable and work,” said Zuma to suggestions that SAA could be privatised.

The president is not obliged to answer questions in NCOP and Modise thanked Zuma for his appearance. While the president was relaxed on Tuesday, on Wednesday his finance minister faces an incredible balancing act – meeting increasing spending demands while meeting opposing calls for ongoing fiscal consolidation, all while he faces criminal charges and the ANC is at war with itself. DM