TRAINSPOTTER: Shaun of the Dead 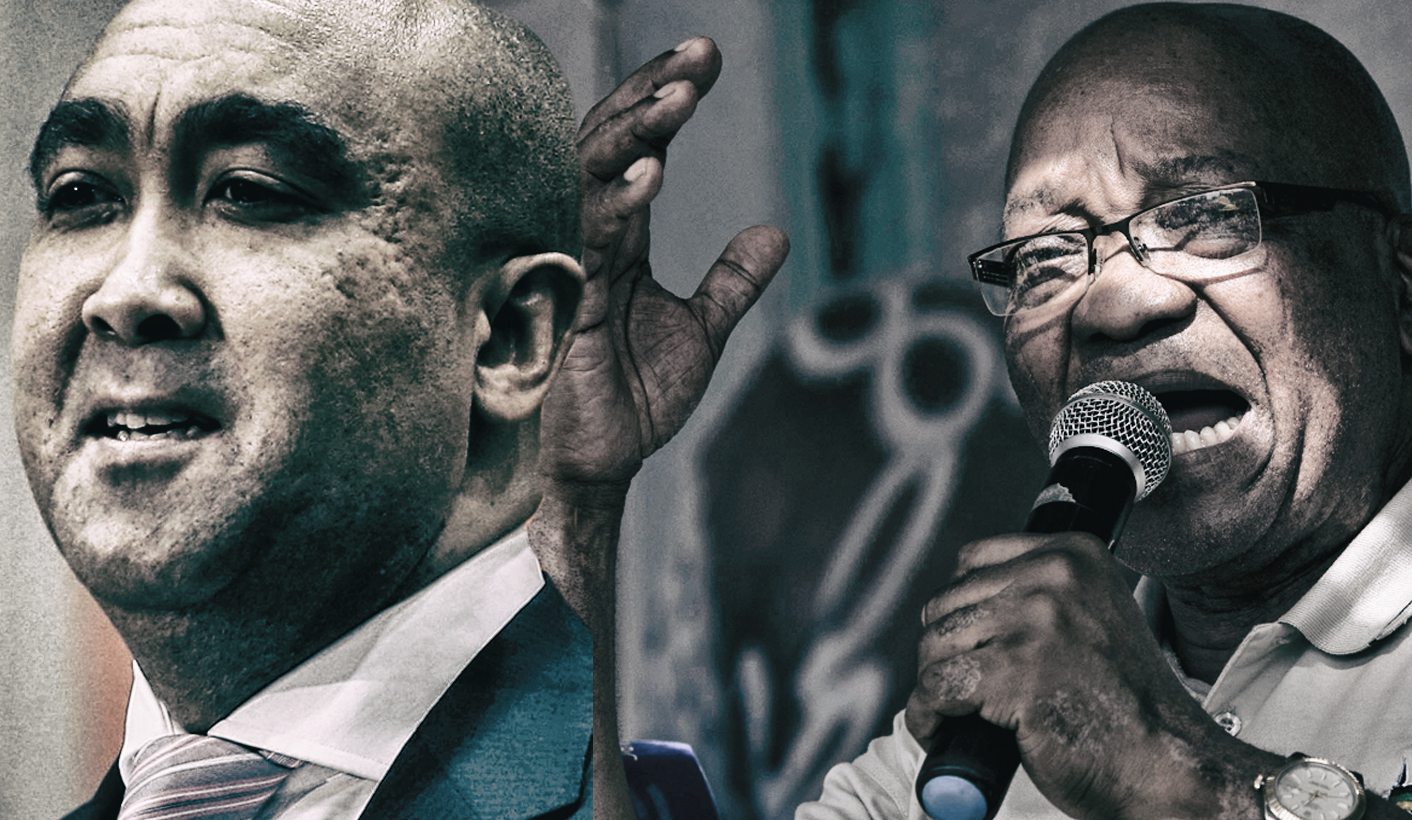 Did President Jacob Zuma drink National Prosecuting Authority director Shaun Abraham’s brain? What other explanation is there for the advocate’s lurch toward ultimate ignominy: acting as the lead zombie in the goring of the country’s finance minister right between a) the reading of the mid-term budget on October 26, and b) the international rating agencies evaluations on December 2. As we stumble toward the abyss, Shaun of the Dead, aided by his innumerable slavering henchfolk, doesn’t seem to care whether or not he pushes us over. Can he be stopped? By RICHARD POPLAK.

The above lines are culled from De Niro’s Game, author Rawi Hage’s stunning novel of Lebanon’s civil conflict. Hage won big prizes for this book, largely because he depicted perfectly the schizo condition of living in a country at war with itself. A malevolent figure hovers above the citizenry, sends Slushee straws into skulls – and, in a ritual of mass civil erasure, slurps up all the gray matter.

And so, our agency is outsourced to the Great War God’s belly.

In order to facilitate such an outsourcing, Jacob Zuma, our very own War God, has assembled an impressive – or, alternatively, an unimpressive – cabal of conspirator eunuchs. But nowhere has his blade worked more keenly than on Advocate Shaun Abrahams, he of the National Prosecuting Authority, and the man currently in charge of litigating our way into oblivion.

Abrahams’s lurch towards peak stupidity began on TK, when he organised a press conference to announce that he was going all TV-lawyer on Finance Minister Pravin Gordhan. (Why would the NDPP find it necessary to call a press conference to announce a prosecution, even as high profile as this one? Answer: the spectacle demands constant performance.) His vastly imposing eyebrows were so furrowed that they resembled two caterpillars locked in blissful congress, and he uttered the tragicomic line that will define his legacy:

“The days of disrespecting the NPA are over.”

Abrahams swore that he would prosecute Gordhan, along with former South African Revenue Service (SARS) deputy commissioner Ivan Pillay, and former SARS commissioner Oupa Magashula, for paying Pillay his R1.1-million pension “without following correct procedures” – an offence dating back to 2010, when Gordhan was Finance Minister for the first time. Cue jittery markets, a tanking currency, and the hand-wringing of anyone with even the slightest regard for the intricacies of competent governance.

The case was so pathetically threadbare that it was clearly a plot to finally shunt someone more Shaun Abrahams-like into the Treasury. The good/bad news is that there appears to be a surfeit of walking corpses inhabiting the upper ranks of South African government. Check this out: the day before Abrahams made his brash, no-nonsense nonsense announcement, he showed up at the ANC’s headquarters in Luthuli House for an impromptu meeting with the president of the republic. The gathering was supposedly called by Justice and Correctional Services Minister Michael Masutha, who wanted to hear from the “horse’s mouth” details of the student protests that have so troubled President Zuma. But regarding the fees upheaval, Abrahams is less the horse’s mouth than he is the horse’s ass – he knows no more than anyone in Luthuli House, which is nothing at all.

Also present at the meeting were State Security minister David Mahlobo and Minister of Social Development Bathabile Dlamini, whose combined presence further suggested that this wasn’t a meeting of minds, but a gathering of Zuma’s frontline undead generalissimos. The optics of the NDPP showing up at ANC party headquarters the day before he tries to eliminate one of the president’s most persistent problems?

They’re not so hot.

On Wednesday, there’s a good chance that an as-yet-unfired Gordhan will drop the mid-term budget. As he bustles up to the lectern with Abraham’s shiv at his back, the finance minister will be shunted along with all of us into the next national crisis: the fallout of his reading, and his court appearance on November 2.

Miraculously, the zombie hordes have yet to drink up what remains of Gordhan’s brain, which may in itself be a tactic: he will stand before the nation and tell us that we don’t get the toys we’ve been demanding since last he addressed us in such a capacity.

Will magical billions be conjured in order to fund an entire country’s tertiary education? They will not. But the minister has indeed been facing massive pressure within the ANC to start buying back an electorate that fled the party during last August’s municipal elections. They want Minister Gordhan to go shopping for souls, but, in an economy that will probably grow by no more than 0.4% this year, or at all, he doesn’t have the American Express Centurion card to do so. Instead, he has promised to rein in spending, cut the budget deficit, and raise taxes.

Amid all of this skullduggery, it would be interesting to know what kind of country we hope to become. But this is no longer a place in which policy conversations are conducted. For instance, there is much the finance minster has to answer for related to his first stolid, don’t-rock-the-boat tenure as the head of the Treasury. But we don’t hound Gordhan on the finer points of his ideological outlook, because we’re too busy trying to keep him from getting arrested by a fake national prosecutor. In this, he will probably never face the klieg lights for behaving like the developing world’s tamest neoliberal. And that’s a shame, because this is a tête-à-tête we should be having. Abrahams’s charges are so absurd and so trumped up that when Gordhan is forced out of the public office in the coming weeks, he will shortly be ensconced in the gilded halls of the private sector with a glass of champagne and a fat cheque or three, feted as another of this country’s noble victims.

As all of this should make clear, the country is riven by successive convulsions – in our forgotten peri-urban hellscapes, in our universities, in our cultural spaces, within the ruling party itself. The men and women who run this country certainly don’t care, but they understand the utility of all of this chaos perfectly, and they have waged a bet: if they can dodge their way through this obstacle course to the Treasury, it won’t matter one way or another how things shake out.

Free education, no free education – when your Dubai mansion makes the front pages of Hello magazine, who cares, right?

Shaun of the Dead is the perfect foil – man of the year, conspiratorial eunuch of the century. He is using his position to wage war against his master’s enemies and to protect his allies, pretending that his choices constitute due process. Before the Gordhan flap, Abrahams famously resisted prosecuting President Zuma for so much as misappropriating a roll of toilet paper, and defended his own deputy, arch-villain Nomgcobo Jiba, whom the high court has subsequently struck off the roll. Now, the NPA doesn’t seem much interested in taking down, say, a fellow like ex-Finance Minister Des van Rooyen, whose cellphone records place him at the Guptas’ Saxonwold chill pad the day before he was handed the keys to the coffers, or Mosebenzi Zwane, who wanted to screw an entire country, or whoever sold SA’s strategic oil reserves, or… or… or.

Shaun, and the rest of Zuma’s thugocracy, are playing the short game. They may lose. They may win – the outcome is by no means clear. But what makes an empty vessel like Shaun Abrahams so dangerous is that fact that he’s contributing to the steady destruction of an institution critical to the functioning of the state. He is literally destroying the country. As it is, our history has taught us to mistrust the police and the ingrates that have always stood behind them, lawbook in one hand, bible in the other. Shaun of the Dead is just another of those stooges, kicking away at our foundations, perfectly willing to have the whole thing come crashing down so long as there is a payday at the end of it.

Can Shaun be stopped? It’s late in the day, I’m afraid. They don’t listen to reason, these cats, and they ignore appeals to a morality they don’t possess. They’re like the undead souls populating Rawi Hage’s brilliant novel, who understand the strength that attends such emptiness.

“Thieves and thugs like us,” says the novel’s chain-smoking protagonist, “since when have we ever believed in anything.” DM