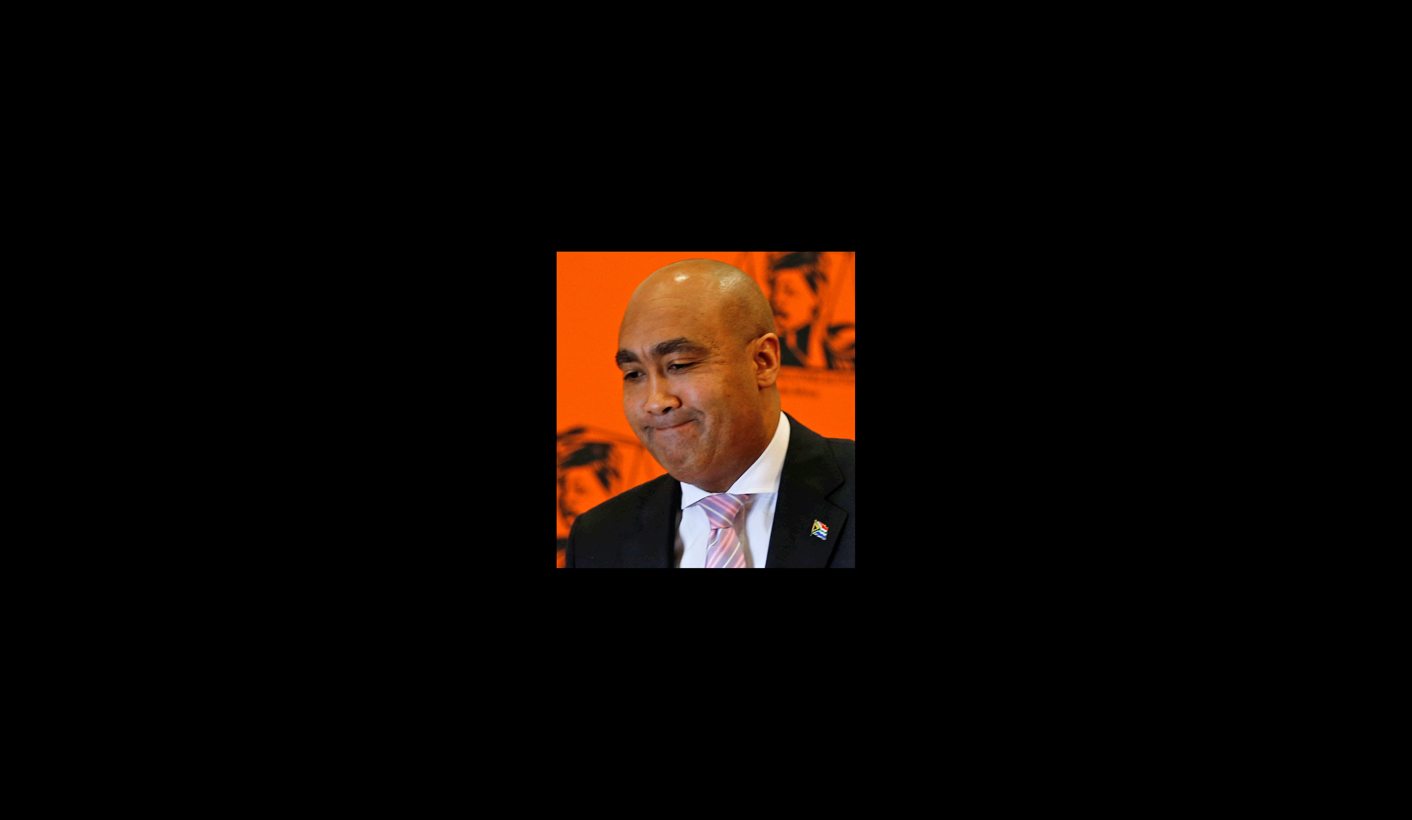 In his letter inviting Finance Minister Pravin Gordhan to make representations by 17:00 on Tuesday October 18 with regard to charges of fraud and theft, NPA head Shaun Abrahams fingered his Acting Special Director of Public Prosecutions and head of the Priority Crimes Litigation Unit, Torie Pretorius, saying the decision to prosecute was Pretorius’s, taken in consultation with North Gauteng Director of Public Prosecutions, Sibongile Mzinyathi. Meanwhile, Abrahams appears to be scrambling to find a way out of what has clearly turned into a bit of a prosecutorial cock-up. By MARIANNE THAMM.

Pravin Gordhan’s legal team waited almost until the 17:00 Tuesday deadline before politely informing NPA head Shaun Abrahams that their client would not be making any representations, thank you very much. The Minister’s lawyers referred to an opinion by the legal firm Webber Wentzel, representing Freedom Under Law, that the charges were “unsustainable”, that they may have been actuated by “conscious recklessness” and “ulterior purposes”.

It is a view universally shared by everyone in the legal world [apart from the Hawks and NPA, that is] including Cathleen Powell, senior lecturer at UCT’s Department of Public Law who has stated that this is a case the NPA cannot win.

Writing in The Conversation, Powell opined, “Indeed, the weaknesses of the case are so glaring that any vaguely competent criminal lawyer should have been able to spot them. Secondly, it is doing so in a manner which belies its claim to be protecting and enforcing the law. This case may therefore have less to do with the law than with the pursuit of a political agenda. If so, law has ceased to be the basis of a just and fair society – and instead become an instrument for political gain.”

The other legal pitfall of course is that the crimes of fraud and theft do not fall within the ambit of the Priority Crimes Litigation Unit – set up to prosecute war crimes, treason, sabotage and offences under the Internal Security act.

But hey boys, we have a Finance Minister to charge, let’s nuke him with what we’ve got.

Perhaps that is why Abrahams has passed the buck in this whole sorry saga on to Dr Torie Pretorius, a veteran investigator who in his day prosecuted some of the most notorious names in the apartheid rogues gallery, including assassins Eugene de Kock and Ferdi Barnard as well as Wouter Basson, former head of the apartheid chemical and biological warfare programme.

Perhaps that is also why at the weekend Abrahams reportedly called and met with various individuals to discuss the NPA’s proposed invitation to make “representations” to the suspects, Gordan, Ivan Pillay and Oupa Magashula.

A bit rich if you think about it, really.

Abrahams, as a seemingly competent head of the national prosecuting authority, should have done the consulting BEFORE he called a national press conference on Tuesday October 11 and televised it live to the nation, announcing that he was charging Gordhan, Pillay and Magashula with fraud and theft related to the early retirement and pension payout to Pillay.

The charade, however, has now been exposed and Abrahams’ claim that “the days of disrespecting the NPA are over” is applicable only to himself.

Another anomaly in the entire debacle is the apparent recycling of a CAS number originally ascribed to a docket opened by SARS Commissioner Tom Moyane at the Brooklyn charge office in Pretoria and relating to the so-called “rogue unit” in March 2015.

The summons that was served at Gordhan’s home on October 11 and delivered to Treasury later in the day bore the same number – CAS 427/05/2015 – as Moyane’s original complaint. Daily Maverick’s questions as to why this was so went unanswered.

In an interview with SA Crime Quarterly in September this year Abrahams said, “We want the work of the institution to speak for itself. I have made it clear that I will not succumb to public sentiment. I will not be pressurised by anybody into making any decision. I have never been a populist. I have walked the hard yards. I have made and will continue to make tough decisions. I will do what’s right; I will do what’s in the best interest of the NPA.”

Later on in the interview, explaining the nature of the Priority Crimes Litigation Unit (PCLU), Abrahams explained that while he wanted its head [Pretorius] to have oversight, ultimately it reported to him [Abrahams].

“This is to ensure that there is no manipulation, that nobody points fingers and says there is political and/or other interference. They must point fingers at me, I’m the head of the institution. The buck stops with me so I will take the responsibility for that. Dr Torie Pretorius SC heads the unit. He is someone I trust implicitly. I am tremendously pleased with the leadership he has shown to date.”

It is not a leadership though that has impressed former award-winning investigative journalist and author, Jacques Pauw. For most of his career Pauw, a founder member and assistant editor of the independent Afrikaans newspaper Vrye Weekblad and later executive producer of the current affairs programme Special Assignment, has written extensively about the underbelly of apartheid’s most notorious killers and criminals.

The Priority Crimes Litigation Unit was originally headed by Advocate Anton Ackerman (who was appointed by Thabo Mbeki in 2003) and in 2006 it consisted of Ackerman, Pretorius, Abrahams, Chris Macadam (who today is a Senior Deputy Director of Public Prosecution), Susan Bakau and Mtunzi Mhaga. Earlier Pretorius had worked for the Goldstone Commission from 1992 to 1993.

On his Facebook page Pauw posted that he was “bitterly disappointed” in Pretorius’s role in “this sham”.

“I’ve known him for a long time and regarded him as a man of integrity. This was until Abrahams recently promoted him to acting head of the Priority Crimes Litigation Unit at the NPA. I suspect that Abrahams told Pretorius that a successful prosecution of Gordhan will earn him a permanent promotion which will result in a much higher pension and retirement package.”

Pauw added that Pretorius’s unit had become “nothing but Zuma’s legal hit squad” and while it was meant to deal with cases of terrorism and state security, it was prosecuting “sworn enemies like Glynnis Breytenbach, KZN Hawks head Johan Booysen and former Hawks boss Anwa Dramat. Most of these people face trumped-up charges.”

Pauw said he had tried to contact Pretorius and had sent him several SMSes which he had ignored.

“I have decided that if Spokie [Pauw’s nickname for Pretorius] doesn’t want to engage with me, I will post my SMS messages to him on Facebook.”

He added that last week, after Abrahams had announced the prosecution of Gordhan, “I predicted that Shaun ‘op sy moer gaan kry’ [would fall on his sword, well, sort of]. The case has no merit and virtually every South African was rallying behind the finance minister and refused to hand over the Treasury to Zuma and his cronies. I predicted that nothing would come of the prosecution and that Gordhan will emerge even stronger from this.”

Abrahams was now backtracking, said Pauw; “he now wants Gordhan to submit an application so that he can review the case and withdraw the charges. He is also blaming Pretorius as the person that made the ill-fated decision to prosecute. It is of course bullshit but it is clear that Pikkewyntjie [Abrahams’ nickname given to him by his mother] has thrown Spokie down a cliff.”

Questions by Daily Maverick to the NPA with regard to Pauw’s claim that Abrahams had offered Pretorius a permanent position as Special Director of Public Prosecutions in exchange for a successful prosecution of Gordhan and various others had not been replied to at the time of writing.

If Abrahams’ decision can be proven to have been politically motivated in this and other prosecutions or if he did indeed offer Pretorius a permanent position – as Pauw has claimed – Abrahams stands to be prosecuted under Chapter 1 of the Prevention and Combating of Corrupt Activities Act (12 of 2004) relating to “gratification”. This includes “any office, status, honour, employment, contract of employment or services, any agreement to give employment or render services in any capacity…”

It will be high noon in just over a week’s time, should the prosecution of Gordhan, Pillay and Magashula proceed in the Pretoria High Court. Already support for Gordhan has swelled across the board. Abrahams has chosen his side, daggers have been drawn, and who knows who will be the last man left standing. DM