Zuma’s message to diplomats: This is democracy, deal...

Zuma’s message to diplomats: This is democracy, deal with it 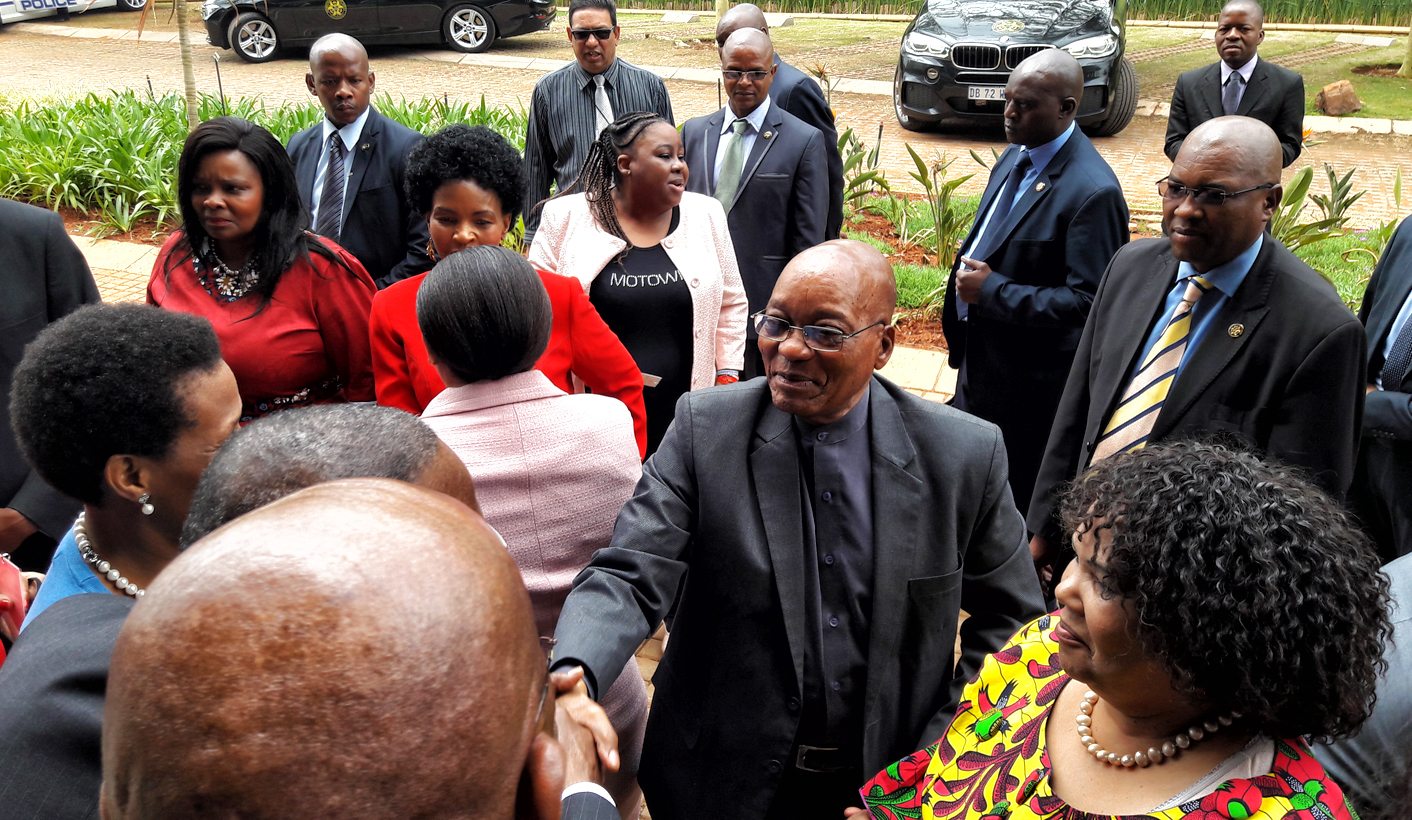 In a speech to South Africa’s top diplomats, President Jacob Zuma said that the current political instability highlights the strength of the country’s democracy. He’s right, although perhaps not quite for the reasons that he thinks. By SIMON ALLISON.

Close your eyes for a second. Pretend you can’t recognise that raspy monotone, and ignore the trademark “he, he, he” that punctuates every second paragraph. Imagine that it is not President Jacob Zuma talking, and you might just be inspired.

“When people say what is happening in SA? Why these protests? Tell them: that is democracy. Why it looks like the ruling party is fighting? That’s democracy, we’ve got open views. We can speak out…The critical point is that democracy is moving, advancing. I’m saying this because people could worry, could say your country is coming down, but democracy is never coming down.

We’re in Pretoria, in the lavish home of the Department of International Relations and Cooperation, and Zuma is addressing the elephant in the room. In the audience is every one of South Africa’s top diplomats, including our ambassadors abroad, assembled for the biennial heads of mission conference. It’s here that they are told exactly how to represent the country; it’s here that they are fed the spin that determines how South Africa is perceived by the rest of the world.

Zuma, in this context, is spin doctor-in-chief, although his grand entrance is blown by yet another gaffe from international relations minister Maite Nkoana-Mashabane, who introduces him as “His Excellency, the President Gedleyihlekisa Dlamini-Zuma”. She is visibly embarrassed by her mistake – Nkosazana Dlamini-Zuma is, of course, the president’s ex-wife and now a political rival – although an indulgent Zuma laughs it off.

Zuma’s message is overwhelmingly economic. He makes it clear that attracting investment is the primary purpose of our embassies. “You are our foremost marketing and promotion officers. You need to continue to position our country positively, and help us to grow the economy through global economic partnerships. Keep our country brand alive and visible everywhere you are. The economy is the apex priority.”

Noticeably absent from his speech is any substantive mention of South Africa’s role in promoting peace, security and human rights. Unlike under President Thabo Mbeki, these are very much second-order considerations for Zuma’s administration.

Zuma also emphasises the importance of South Africa’s membership of BRICS and the G20, and lavishes praise on China. “I was convinced that China is going to lead the world economically. But there is a big secret to that. Chinese are very disciplined. They are running the system in a disciplined fashion, it is not everybody doing their own thing. Other countries have a system with its own inner contradictions. In China there are no inner contradictions, it’s clear. The whole nation of 1 billion people is subjected to discipline and that’s why they are growing.” One suspects that Zuma would like a little more discipline from his own unruly population.

Which brings us neatly to the elephant in the room: Zuma’s own troubles, which are becoming increasingly difficult for diplomats to explain away. But the president did not look fussed, emphasising instead that ambassadors should use the political instability to highlight the strength of South Africa’s democracy.

He said that he had travelled recently to two countries in the Middle East, Oman and the United Arab Emirates, and marvelled at their development. “I asked my delegation, what have you noticed in these countries that we’ve been through? They said this, and that. I noticed one thing: that the world of their rulers is different from ours. Because there’s no debate.”

“Much as you can say there is development without debate, generally people in those places have got no voice. Whether you like it or not you just take it. [But] Democracy is a debate, people argue. SA is one of the countries that puts this example in perhaps at times an exaggerated way. At times we debate over and over. But that is democracy. You can’t go wrong,” said Zuma.

Almost, but not quite. The corruption charges, the state capture allegations, the blatant cadre deployment – these are all overwhelmingly anti-democratic moves. The real message that South Africa’s diplomats should be conveying is that South Africa’s democracy stands tall despite its president. And if it is strong enough to withstand him, then it is strong enough to withstand pretty much anything. DM