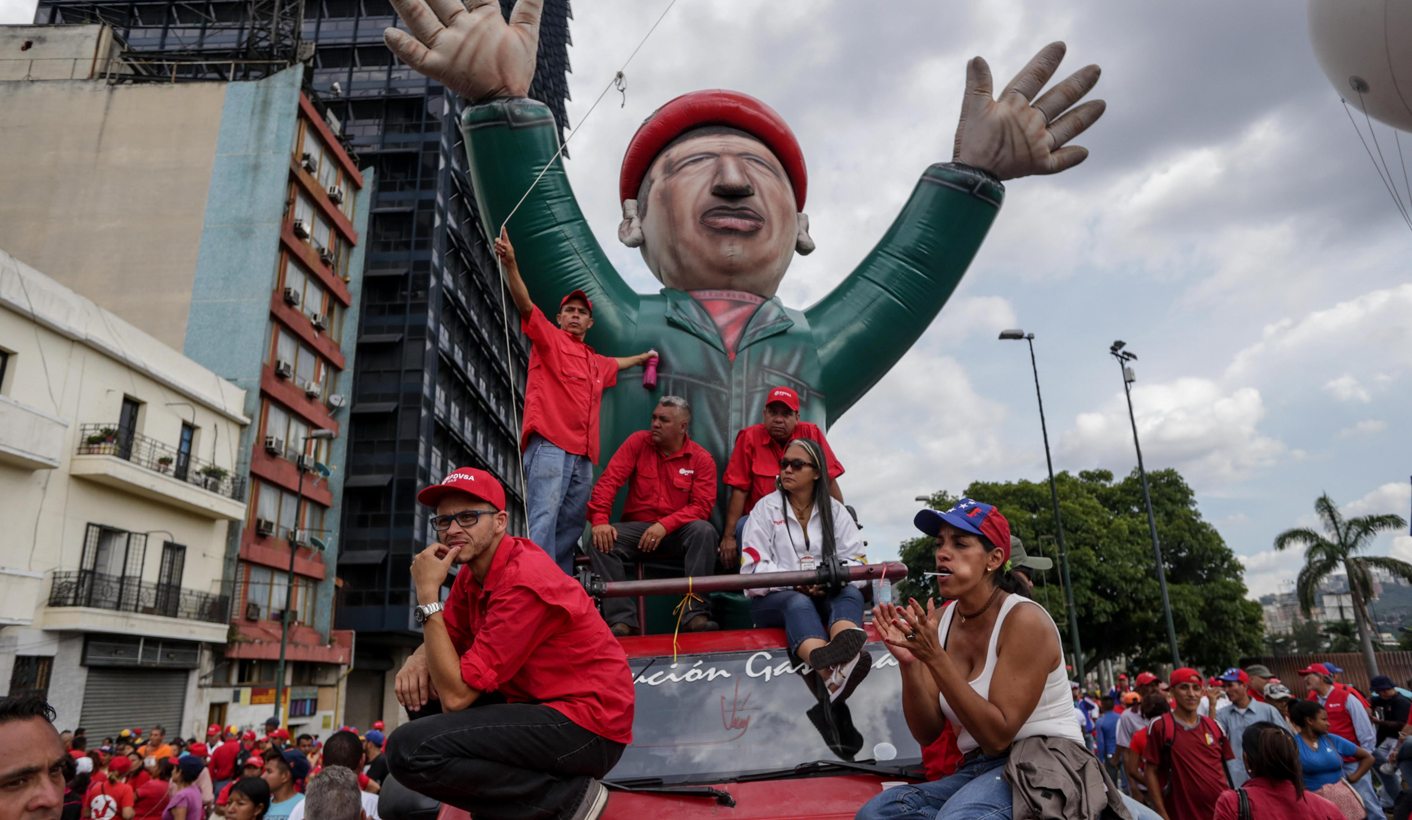 Faced with crushing economic stress, a weakening president, a constitutional stalemate and popular unrest, Venezuela’s “Chavista” government and the opposition are feeling their way towards compromise. Commentary by INTERNATIONAL CRISIS GROUP.

High on the slopes of the mountain that separates Caracas from the Caribbean, three capital letters, vertically arranged, have recently lit up at night. From most parts of the Venezuelan capital you need binoculars to pick out the word PAZ – “peace” in Spanish. Few people bother to do so. Unlike their neighbours in Colombia, most Venezuelans are more concerned with how to obtain food, medicines and other basic goods. Even if they peer upwards, they might be puzzled by what the government (which put up the sign a month ago) means by “peace”.

If offered relief from the violent crime that has left Venezuela with one of the world’s highest murder rates (around 20,000 homicides a year in a country of 30-million), they would no doubt eagerly embrace the offering.

But what the government of Nicolas Maduro means by “peace” is for the opposition Democratic Unity (MUD) alliance to give up on its attempts to trigger a mid-term recall referendum against him. On September 1, the MUD put hundreds of thousands of nonviolent demonstrators on the streets of the capital in support of its referendum demand, a constitutional right. Maduro called a counterdemonstration, asking supporters, “Are we going to allow [the opposition] to maintain a permanent threat to the peace of Caracas?”

If the referendum were to be held before January 10 next year, a “yes” vote would produce an immediate presidential election, which the government would almost certainly lose. This would put an end to the seventeen-year-old “revolution” launched by the late President Hugo Chávez, who championed the mid-term referendum clause in the constitution in exchange for lengthening the presidential term and allowing reelection.

In polls, almost 70% of voters say they would vote Maduro out. But the government controls the National Electoral Council(CNE) and the Supreme Court. It has used every trick at its disposal to delay the referendum until after January 10, the day on which Maduro enters the final two years of his six-year term. Once that happens, his departure for any reason would lead to his vice president (an appointed, not elected figure) serving out the term. Already, factions within the ruling party are engaged in public wrangling over who should succeed Maduro under those circumstances.

Most analysts agree that the only way the MUD can force a recall referendum this year, shifting the contest back to the electoral arena where its strength lies, is to put enough people on the streets for long enough to convince the army that continuing to back Maduro would involve shooting large numbers of unarmed demonstrators. If the military were to withdraw support, the president might resign, rather than face the humiliation of being voted out halfway through his term. Constitutionally, either option would trigger fresh presidential elections. This would almost certainly be preceded by intensive negotiations, in which a peaceful transition might be exchanged for a degree of impunity for prominent government figures, some of whom are accused of serious crimes and/or human rights violations.

However, the chances of a referendum before 10 January seem small. The Supreme Court has even been asked to declare the whole process fraudulent and ban the MUD. But factional struggles in the regime mean that Maduro may well be replaced anyway by his current vice president or another figure. If the referendum bid fails, the government will still need to seek some kind of deal in order to ensure governability between now and the next presidential elections in December 2018. Talks on compromise are likely. Even now, as the two sides trade insults and prepare for a showdown, there continue to be discussions behind the scenes. The four leading parties in the opposition alliance all have their contacts on the government side, and last month representatives of each of the four sat down for private talks with four leading representatives of the ruling Partido Socialista Unido de Venezuela (PSUV).

These talks-about-talks predictably fell apart over the issue of the referendum. MUD delegates wanted to negotiate fairer conditions but the government refused even to contemplate a vote in 2016. Various sources told Crisis Group there was an offer to hold a general election next year, in exchange for abandonment of the referendum and approval by the (opposition controlled) parliament of a fresh debt plan to ease the government’s acute cash flow crisis. But without cast-iron guarantees such as a constitutional change in the election date – approved by parliamentary majority, upheld by the government controlled Supreme Court, ratified in a referendum and monitored by a credible third party – such a promise would be worthless, even if the MUD were in a position to negotiate away the right to a recall referendum this year.

When the talks’ existence was leaked, the MUD was accused by its own hardliners of betrayal. It was the second time in four months that the opposition alliance had found itself having to explain why it was in closed-door conversations with the government. Back in May, the two sides held indirect talks in the Dominican Republic, at which former Spanish premier José Luis Rodríguez Zapatero acted as an intermediary.

The Zapatero initiative, at the behest of the Union of South American Nations (UNASUR) and with the involvement of two former Latin American presidents, is viewed askance by the MUD because those involved are all seen as sympathetic to the government. Crisis Group has repeatedly stressed the need for the wider region to help facilitate a dialogue. In particular, it is vital that both sides feel adequately represented.

Four months ago, Zapatero summarised the main points on the dialogue agenda as:

Apart from the release of one prisoner (who has dual Spanish-Venezuelan nationality), Zapatero has failed to obtain concessions from the government on the issue of political prisoners. The human rights group, Venezuelan Penal Forum, says repression has worsened considerably since the mediation effort was launched. Forum Director Alfredo Romero said the number of political prisoners had increased by 31 and there had been over 2,000 politically-inspired arrests in the period.

As for the electoral timetable – described by Zapatero as the “passport of democracy” – President Maduro announced on October 5 that, due to the economic crisis, “elections are not a priority”. Ruling out a recall referendum, not to mention elections for state governors due in December, Maduro said the next elections would be in 2018 – a reference to the presidential election due at the end of that year.

But while the latest fiasco has all but buried the Zapatero initiative, polls suggest a large majority of Venezuelans favour dialogue – the more so if there is international mediation. And there is some light at the end of the tunnel. On 28 September the MUD formally requested the involvement of the Vatican, which has been following the Venezuelan crisis closely. This followed a similar invitation by the government earlier in the month. The Pope, however, while accepting the idea in principle, has made it clear that any participation by the Vatican would come only after the two sides have sat down to serious talks. Until there is some clarity regarding the referendum and the future of the Maduro presidency, that will not happen.

It is not only in Venezuela itself that the political situation is in flux.

UNASUR Secretary-General Ernesto Samper, a figure closely identified with the Venezuelan government and its regional allies, is due to be replaced early in the new year. His successor is bound to reflect the new political reality in the region and could potentially play a role in helping to resolve the crisis. As of January, there will also be a new president in the White House. Under Obama the policy has been to work behind the scenes with other regional powers, but some governments feel Washington should take a more proactive role. There will be a need for carrots as well as sticks, if those in the government who fear for their future if they lose power are to accept the terms of any transition.

Meanwhile, both sides are bracing themselves for a turbulent October, with demonstrations, counterdemonstrations and a tense three days of signature-gathering for the referendum. With Venezuela’s crisis deepening, even the lights spelling out peace on the mountain were no longer visible a month after they were put there – with or without binoculars. Whether the government switched them off, or whether they succumbed to a power cut, is not clear. But with peace hanging by a thread, the omens are not good. DM